Okay, I think it’s safe to say that I’m no prude.  I’ve written my fair share of smut, I’ve demonstrated a propensity for excessive profanity on many an occasion (okay, a near daily basis), I’ve blogged about the merits of the Head O’ State Obama dildo, I’ve been to strip clubs with the boys on bucks nights (ostensibly to chaperone, pfft!), I’ve been window shopping and went to see a live sex show in Amsterdam, and I’ve been to Fishwyck for lattes and butt plugs with RaCeY Robby.  Hell… I have a bright red BUTT PLUG with a FOUR INCH DIAMETER that weighs a couple of kilos that I use for a door stop at my front door!

That being said however, I am not sure sure I can get behind this one.  Here is a product that simply should not exist.  You see, in my humble opinion, there are kids toys, and there are sex toys… and never the twain should meet! 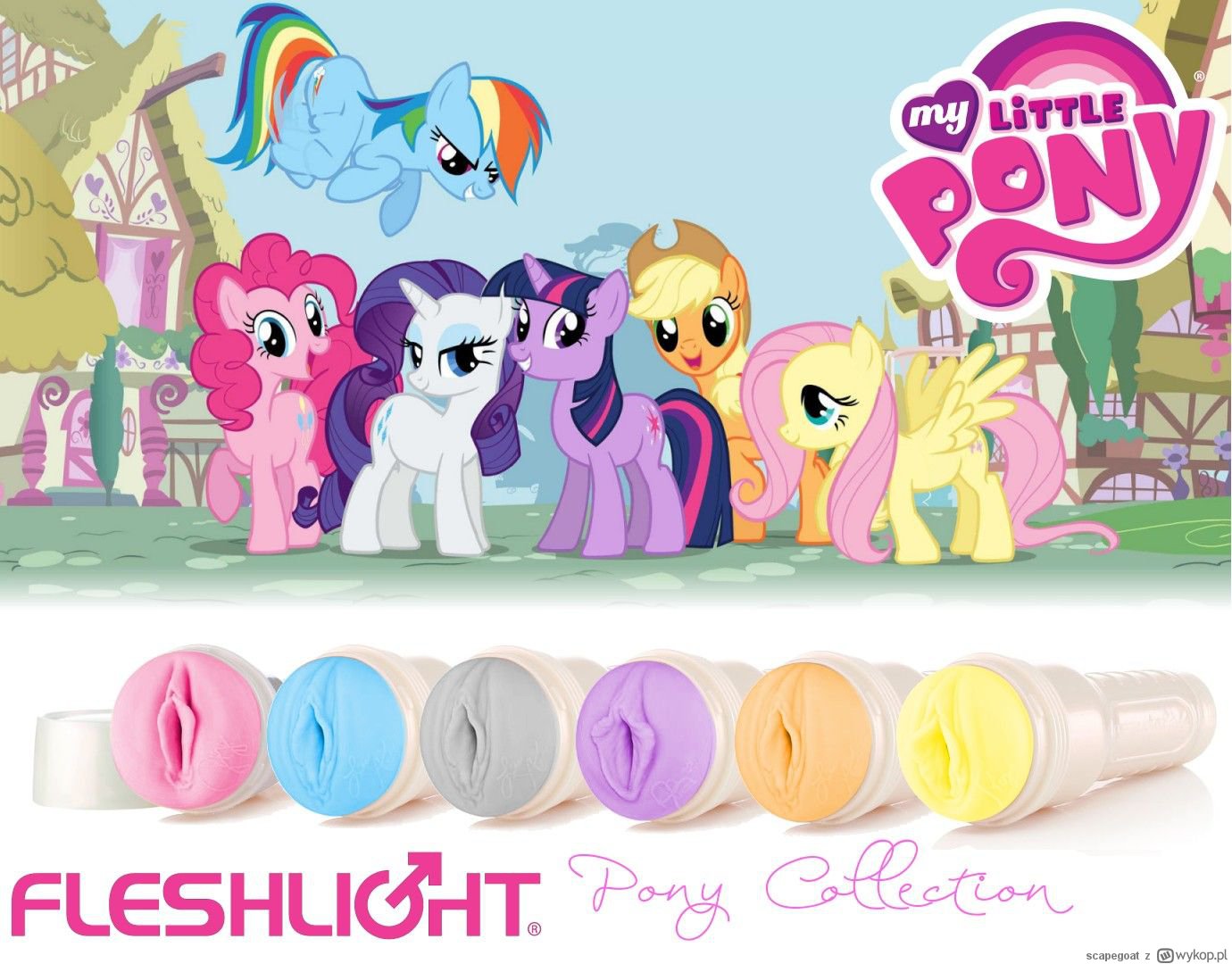 Seriously?  I am really hoping that this is the result of some bored Redditor who had nothing else to do with his creative suite one Friday night.  I’d love to find out that these don’t actually exist.  So far, my (limited) research has turned up no providers where one can purchase this weird and somewhat repulsive paraphernalia for personal, or massive, consumer use.  But unfortunately, my inability to locate an actual purveyor of the product line in question, does not mean they don’t, in fact, exist.  Because honestly, it has gotten to the point that while I find this image to be equal parts alarming, disconcerting and downright ridiculous; thanks to years of exposure to abhorrent phenomena (thanks Neil!) via the internet, I also find it completely plausible!

So while my failure to uncover an online retailer doesn’t discount the existence of these pretty pastel and pretty fucked up masturbatory aids, it does however indicate one thing – there is only so many times I am willing to type variants of ‘My Little Pony Fleshlight Collection’ into my search engine without fearing for the damnation of my eternal soul…!

I finally did it!  I got through an entire Christmas without a single tree killed for my somewhat dubious benefit.  That’s right after over a decade of discouraging people from sending cards and flatly refusing to return cards to people who do send them… finally my house has remained Christmas card free this holiday season!

You see, every year we were getting heaps of them and after Christmas I hated the wastefulness of throwing them in the bin.  I’ve been writing every few years about what a waste of trees, stamps, time, energy and resources that I think Christmas cards are… and every year I have been forever hopeful that none will turn up in the mailbox.  And this year, finally zero cards were received, and the number of cards that were received was ZERO!  I’m so excited, it feels like that time I won the third prize in the local RSL’s chook raffle. 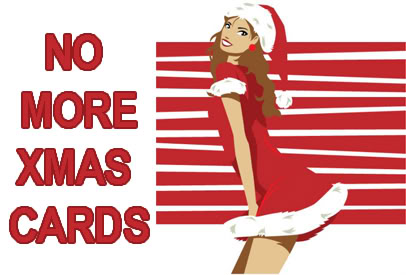 All up we had a wonderful, if exhausting, Christmas.  I did most of my shopping online before we went on holidays, so most of it was completed before I went away and the rest was delivered while we were gone!  Bonus points for for being super organized, and it sure made the week before Christmas a lot easier when we got back.  We spent breakfast and Christmas morning/lunch at my sister, BigSal’s place.  And then onto Mr K’s family for the afternoon and a dinner we really didn’t need by that stage!

The kids had a great time.  As per usual they needed NOTHING…  I swear by the time the Small Child was about three, he already had more toys, than I had in my entire childhood…  But that doesn’t seem to stop us from finding more things they might like – new 3D DS games, loads of clothes to deal with his recent growth spurt, Hobbity stuff we bought in NZ, books, tickets, vouchers, cash and all good things.   I received a very cool iPadAir (no doubt because Mr K wanted his back), two board games, Pandemic AND Ticket to Ride, a much needed massage voucher and lots of other very thoughtful things too.

All up, a lovely family Christmas was had by all and relatively stress free for a change… I could get used to this having Christmas at other people’s places thing.  😛 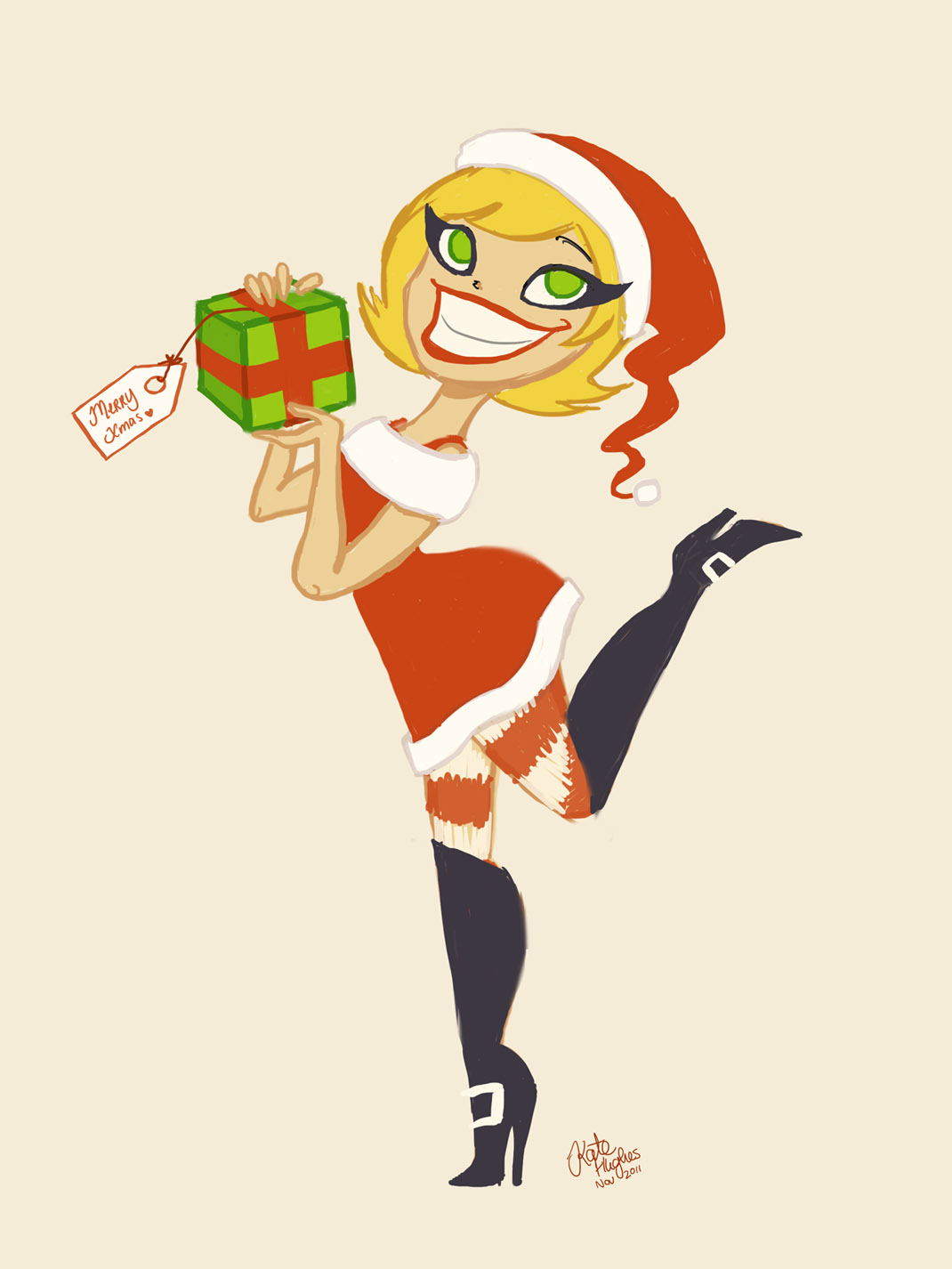 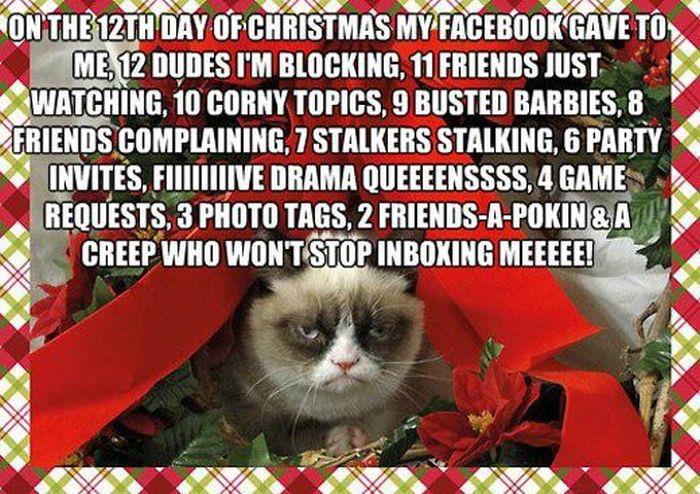 It’s that time of year again when the Darwin Awards are bestowed, honouring those we’d like to vote out of the gene pool… I remember a few years back finding out that our new neighbours had found themselves an honourable mention and were published and everything.  Apparently the kid next door went with his sister’s boyfriend to a nearby caravan park on Wynnum Road to recover a drug debt ($25 for some pot).  The boyfriend was armed with a knife when they fronted up to collect – and in a manner that escapes me to this day, the kid from next door somehow ends up stabbed (and subsequently dies) by the boyfriend.  Who knows…?

1. When his .38 caliber revolver failed to fire at his intended victim during a hold-up in Long Beach, California would-be robber James Elliot did something that can only inspire wonder. He peered down the barrel and tried the trigger again. This time it worked.

And in the Honourable Mention department:

2. The chef at a hotel in Switzerland lost a finger in a meat cutting machine and after a little shopping around, submitted a claim to his insurance company. The company expecting negligence sent out one of its men to have a look for himself. He tried the machine and he also lost a finger. The chef’s claim was approved.

3. A man who shoveled snow for an hour to clear a space for his car during a blizzard in Chicago returned with his vehicle to find a woman had taken the space. Understandably, he shot her.

4. After stopping for drinks at an illegal bar, a Zimbabwean bus driver found that the 20 mental patients he was supposed to be transporting from Harare to Bulawayo had escaped. Not wanting to admit his incompetence, the driver went to a nearby bus stop and offered everyone waiting there a free ride. He then delivered the passengers to the mental hospital, telling the staff that the patients were very excitable and prone to bizarre fantasies. The deception wasn’t discovered for 3 days.

5. An American teenager was in the hospital recovering from serious head wounds received from an oncoming train. When asked how he received the injuries, the lad told police that he was simply trying to see how close he could get his head to a moving train before he was hit.

6.. A man walked into a Louisiana Circle-K, put a $20 bill on the counter, and asked for change. When the clerk opened the cash drawer, the man pulled a gun and asked for all the cash in the register, which the clerk promptly provided. The man took the cash from the clerk and fled, leaving the $20 bill on the counter. The total amount of cash he got from the drawer… $15. [If someone points a gun at you and gives you money, is a crime committed?]

8. As a female shopper exited a New York convenience store, a man grabbed her purse and ran. The clerk called 911 immediately, and the woman was able to give them a detailed description of the snatcher. Within minutes, the police apprehended the snatcher. They put him in the car and drove back to the store. The thief was then taken out of the car and told to stand there for a positive ID. To which he replied, “Yes, officer, that’s her. That’s the lady I stole the purse from.”

9. The Ann Arbor News crime column reported that a man walked into a Burger King in Ypsilanti, Michigan at 5 A.M., flashed a gun, and demanded cash. The clerk turned him down because he said he couldn’t open the cash register without a food order. When the man ordered onion rings, the clerk said they weren’t available for breakfast… The frustrated gunman walked away. [*A 5-STAR STUPIDITY AWARD WINNER]

10. When a man attempted to siphon gasoline from a motor home parked on a Seattle street by sucking on a hose, he got much more than he bargained for. Police arrived at the scene to find a very sick man curled up next to a motor home near spilled sewage. A police spokesman said that the man admitted to trying to steal gasoline, but he plugged his siphon hose into the motor home’s sewage tank by mistake. The owner of the vehicle declined to press charges saying that it was the best laugh he’d ever had and the perp had been punished enough!

So there is a list of people that we really don’t want breeding… and they’re out there among us, walking around like regular people!

Bought a new revolver recently (a Smith and Wesson, 686 6″ .38/357) so naturally needed some speedloaders to go with it.  Most of the guys down the range use moonclips, but I have found they are a little tedious and they require a bit more hand strength than I have on a good day.

Yale found some very cool machined speedloaders and range blocks from Five Star Firearms in the States.  They’re absolutely gorgeous, and no doubt a lot sturdier, compared to the plastic ones I’ve seen around the place at the range.  Even with the international shipping and the declining exchange rate factored in, these worked out quite reasonable in price, due to the ridiculous markups we cop on everything shooting related that the local gun shops can order in.

So… shiny shiny speedloaders for the win! 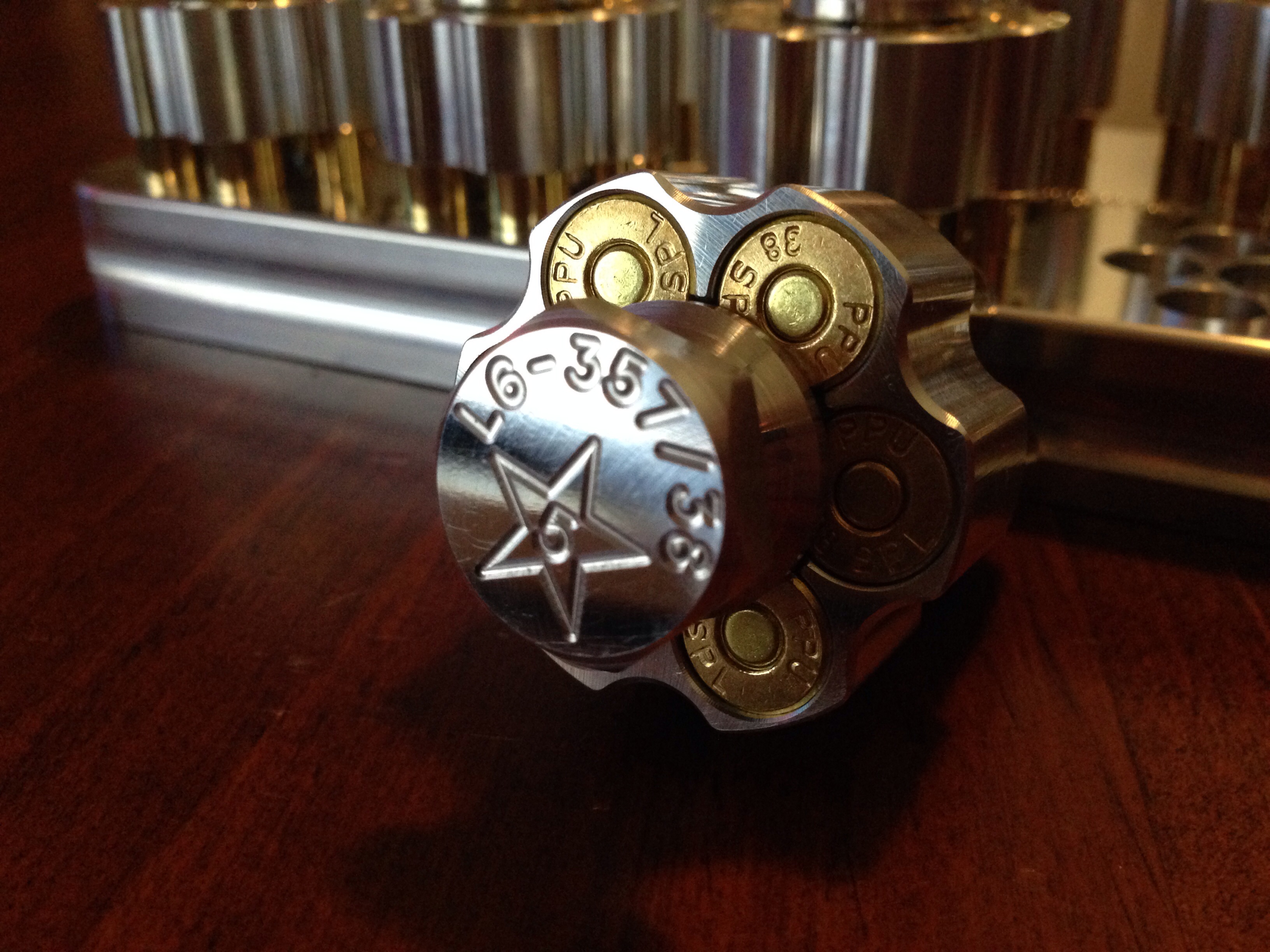 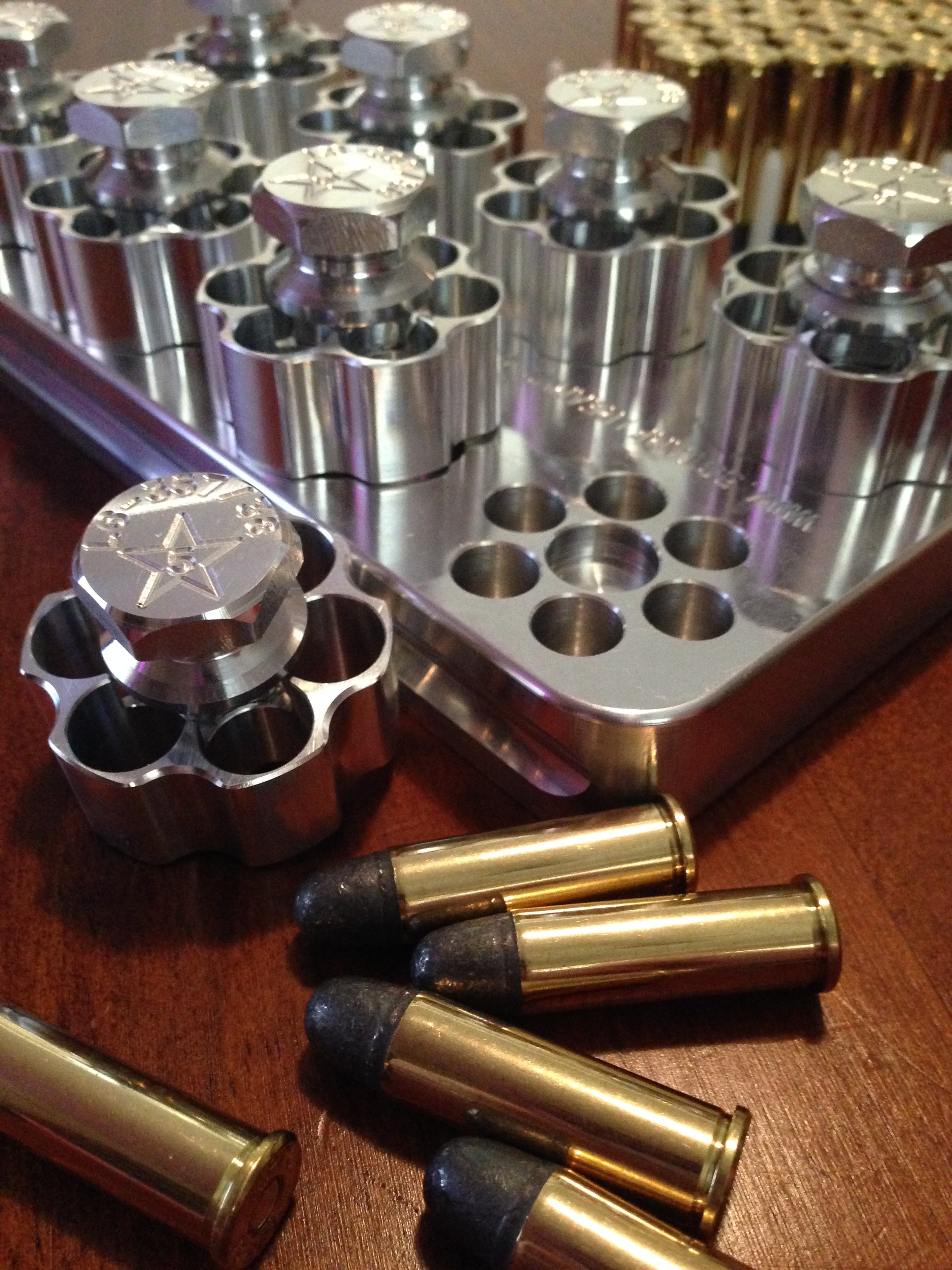 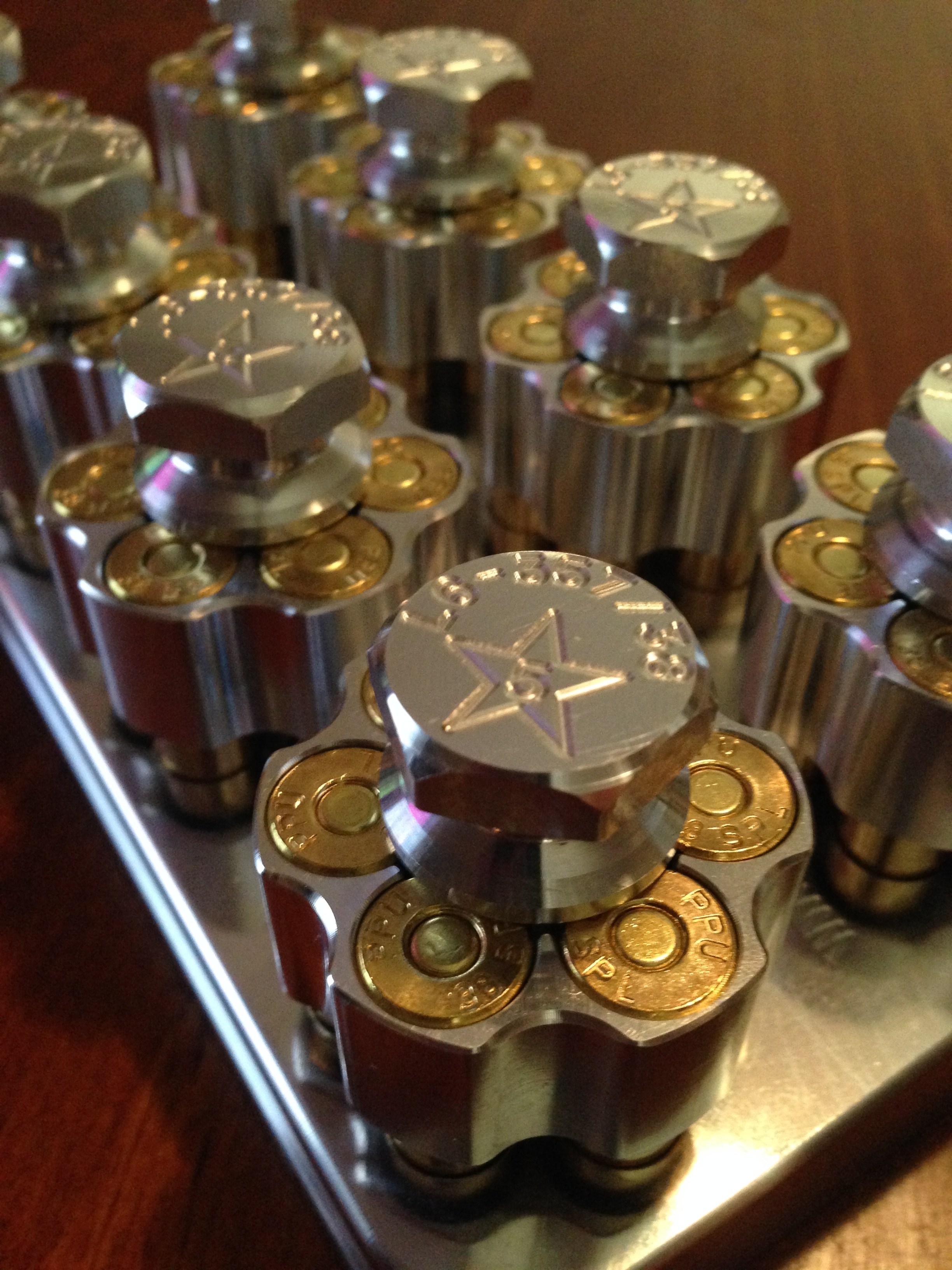 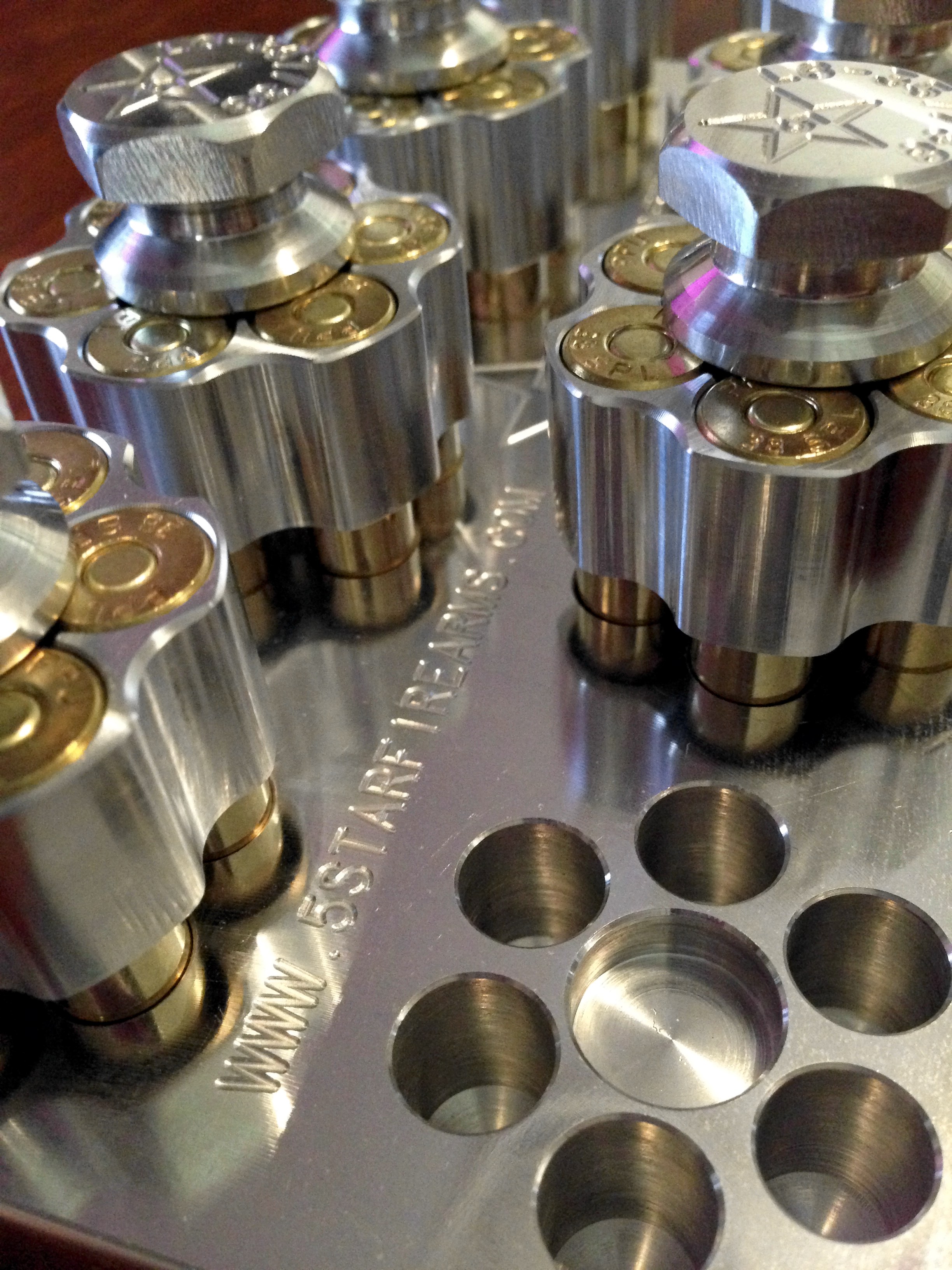 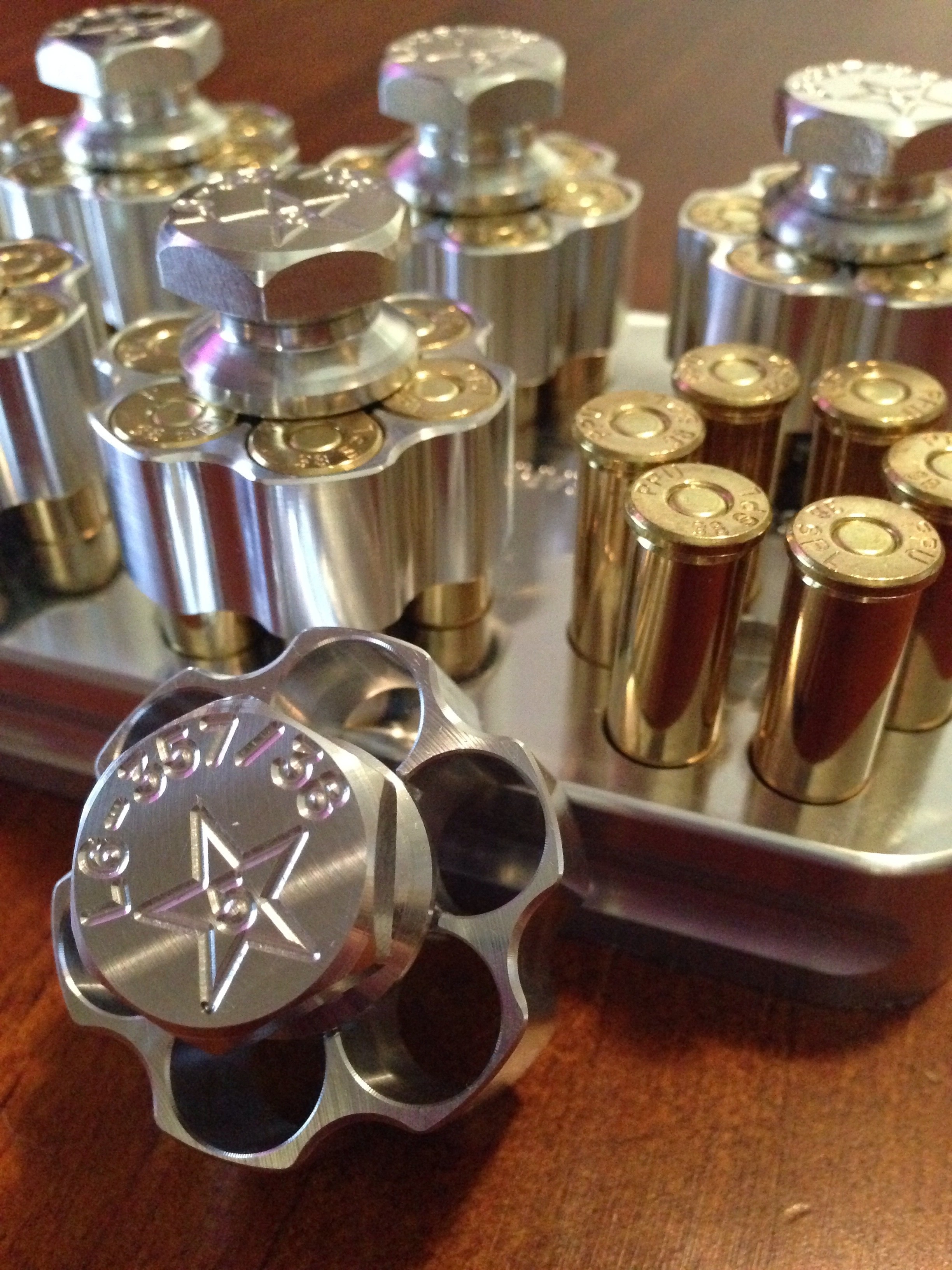 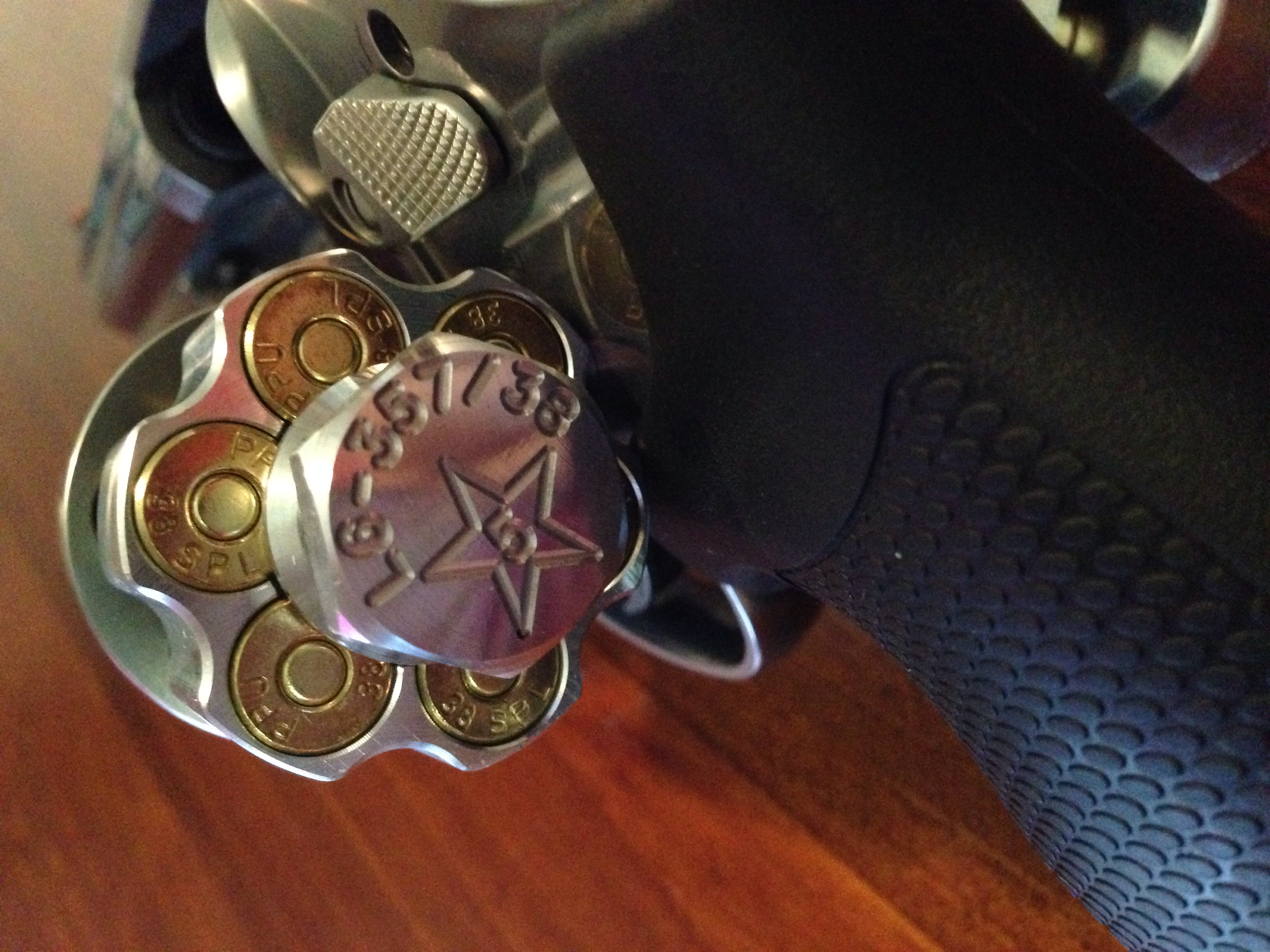 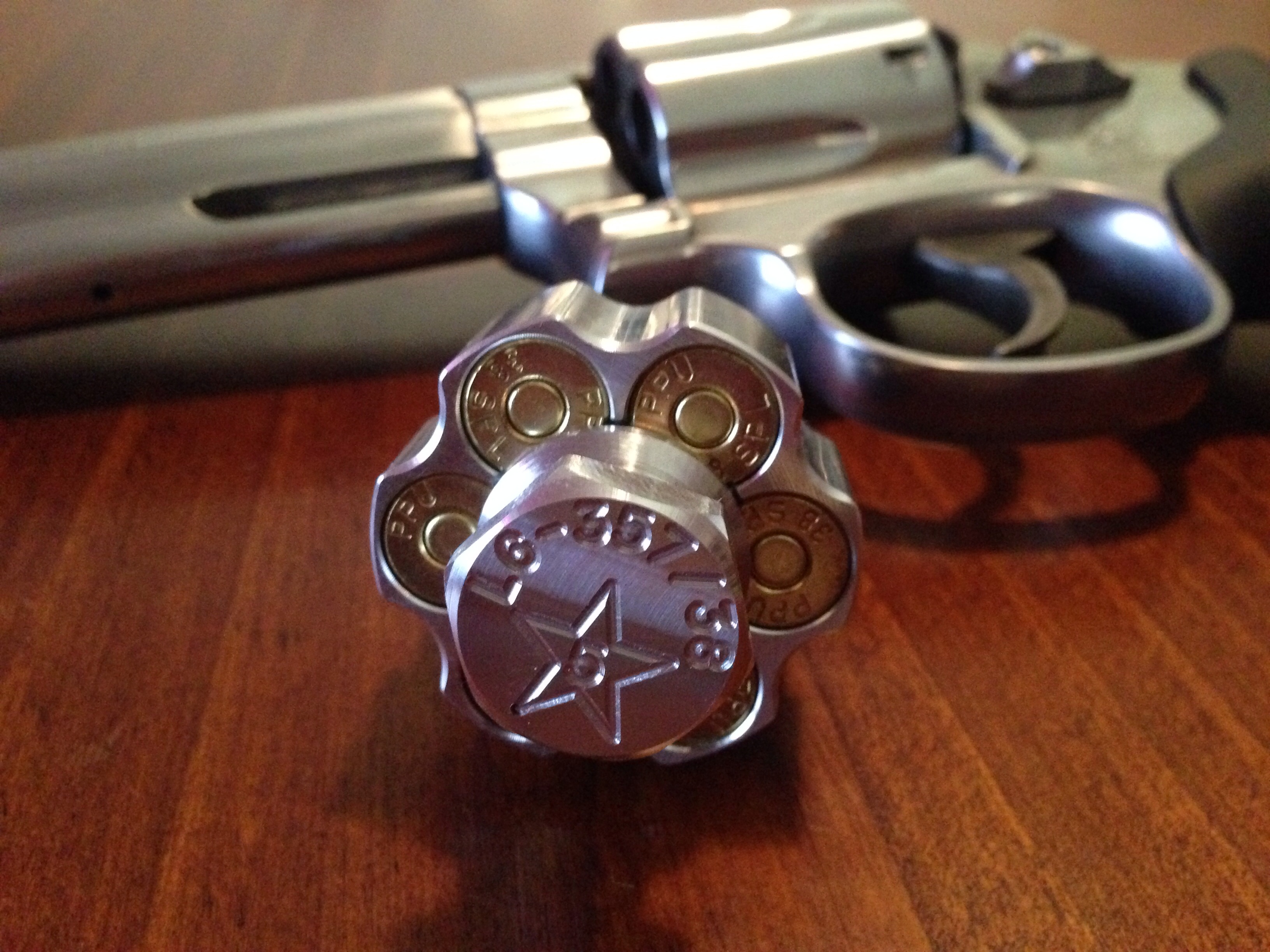 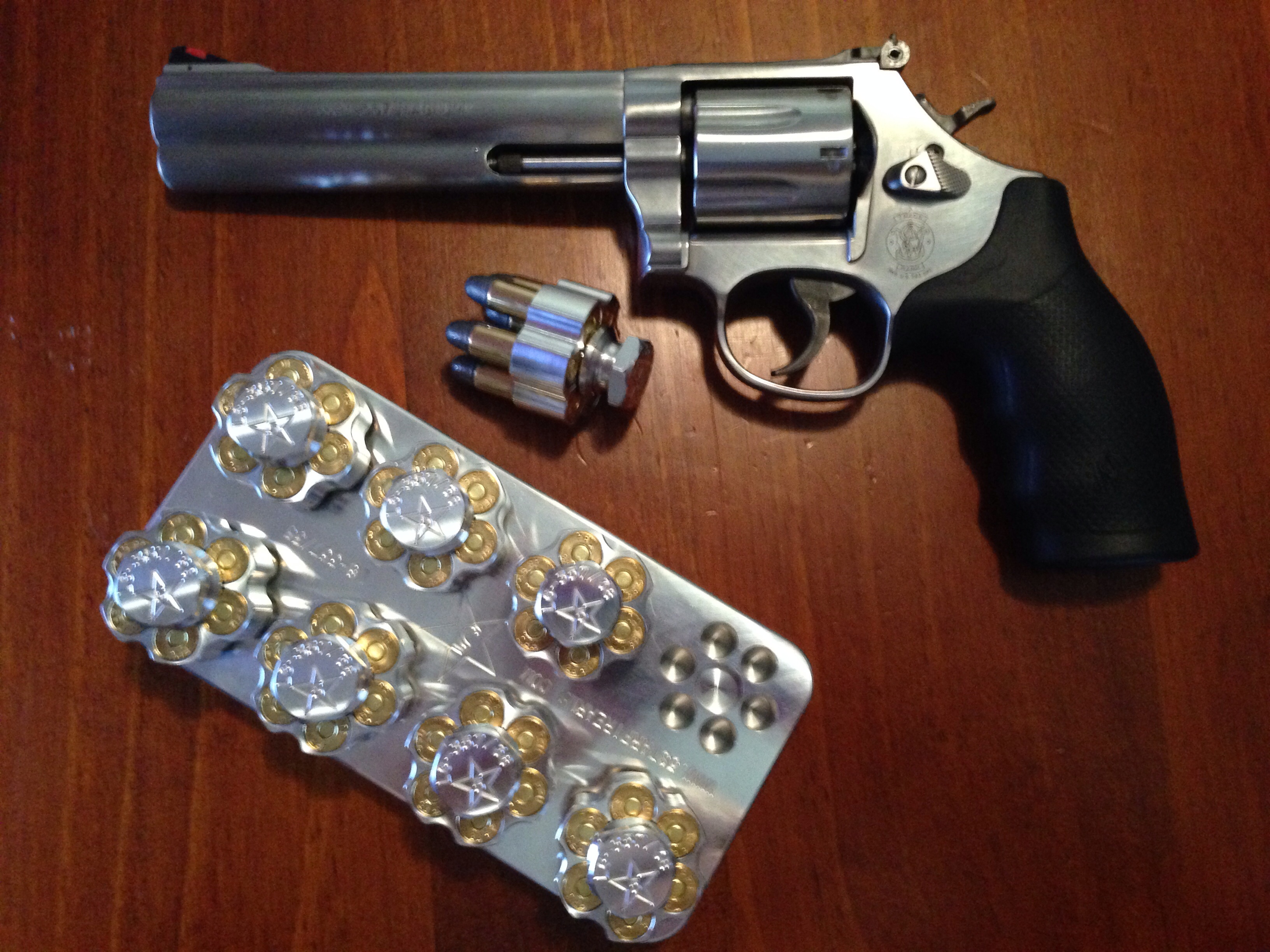