So I quite enjoy a game of Scrabble every now and then… only most people I know won’t play with me anymore.  No idea why.  Enter Words With Friends on my iPhone.

I quite like to play, but every time I go away and find myself with limited internet, I end up forfeiting a bunch of games from them timing out, and you have to start from scratch when you get home again.  Which I have fallen out of the habit of doing because I tend to look at it, and think ‘I’ll just forfeit when I go away again anyway.’  Long story short, I recently updated my app and noticed some changes, and started playing again because I’m not going away for a few months.

The new version of the app, though, has made it quite ten times easier for people to start games with randoms on the Internet and unfortunately it seems that there are plenty of guys who appear to be primarily playing to basically try to meet women… who’d’ve thought? Within the space of a week, I’ve had about half a dozen guys hitting on me via online Scrabble.  :/

It started off innocuously enough, a few ‘Hi, how are you?’, ‘Where are you from?’, ‘Are you married?’, ‘Is that really you?’, type messages from guys who started games with me, and then this guy turned up: 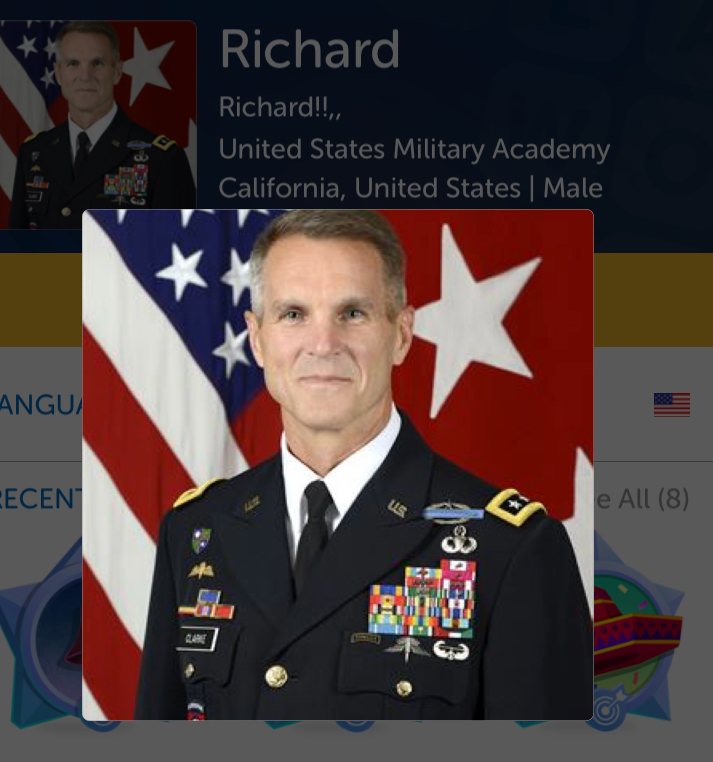 My, who’s that handsome devil in the seriously impressive uniform?, Richard !!,,   Anyway, Lt. General Richard !!,, invited me to play a game with me and it was going fine. He was playing some obscure words that I’d never seen before which is rare but always great fun – I like a meaty game – and then about three moves in I get this: 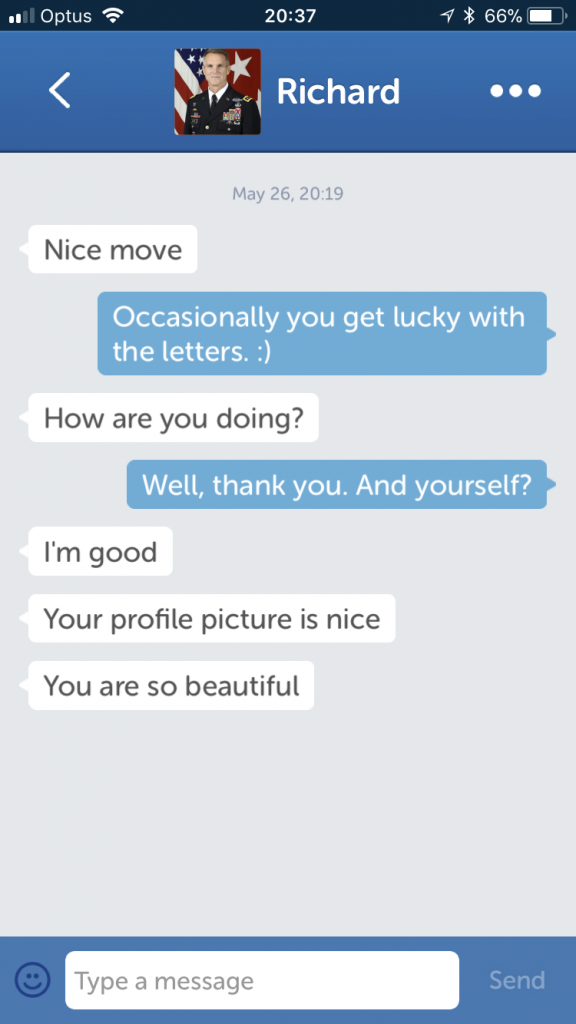 Ummm… Do I have to answer this?  Is it rude to just ignore that and just play my next move?  Do we really have to make chit-chat to have a game of Scrabble?  Why is this unsolicited compliment making me uncomfortable?  Seriously, do we really have to talk at all?  :/

I left it for a few hours, but wanted to follow the game through so I eventually answered him and over the next day or so the conversation went along pleasantly enough… 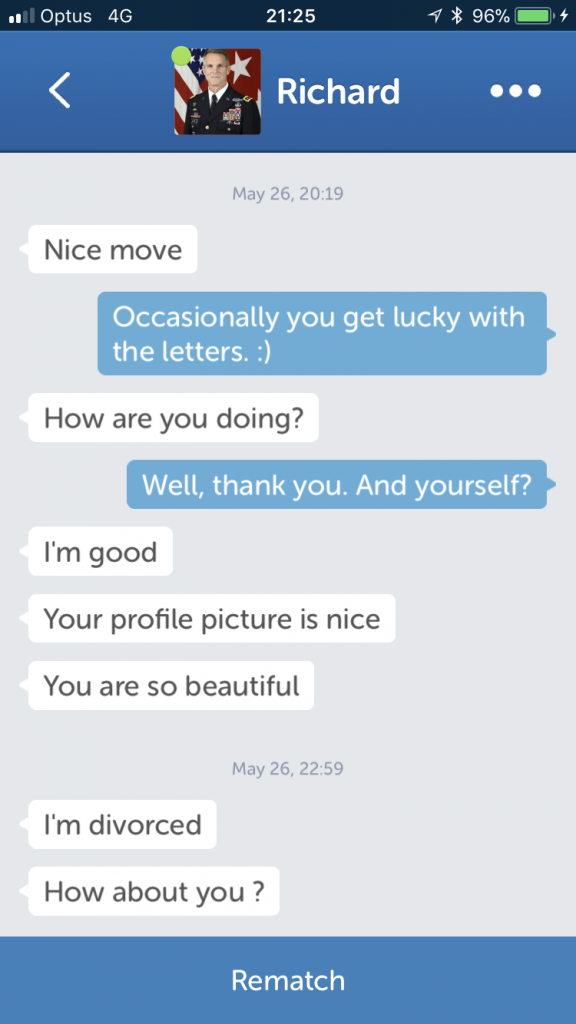 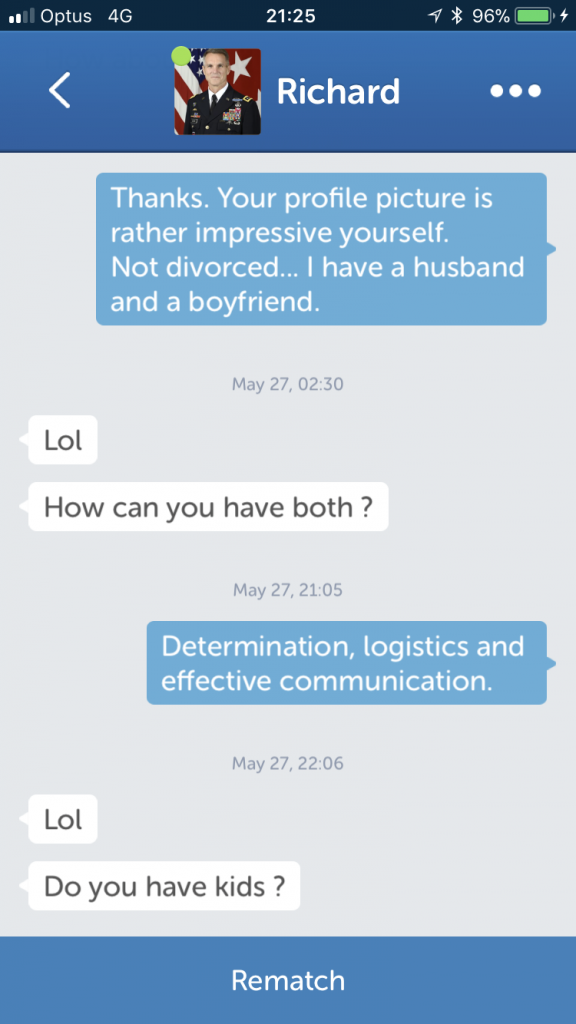 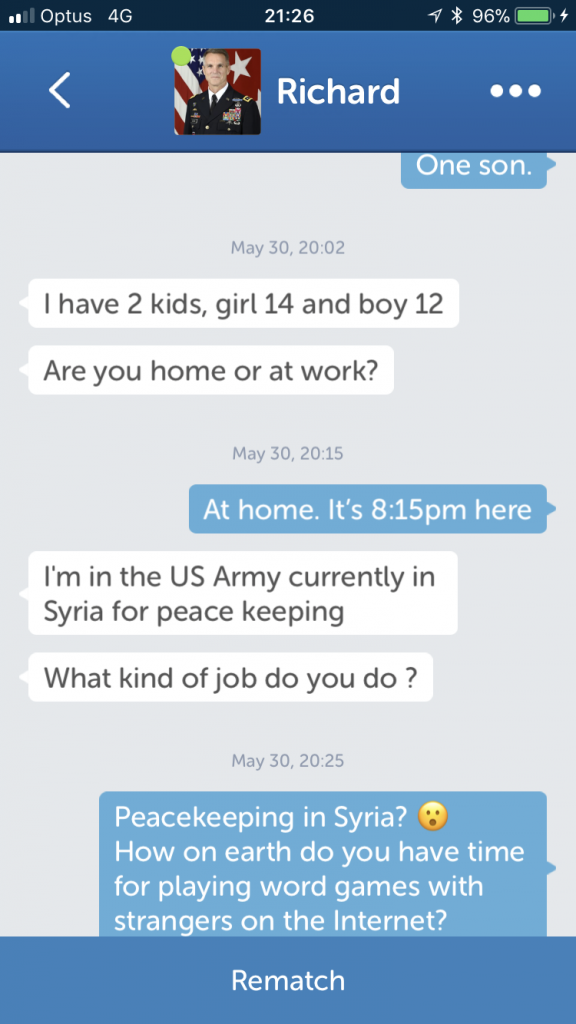 Which was an honest enquiry.. how does someone at his rank on a peacekeeping mission in Syria have times for things like playing word games with strangers on the Internet? My curiosity however, was met with open hostility.  Whereupon the conversation, with no warning whatsoever, spiralled downhill rather rapidly… :/ 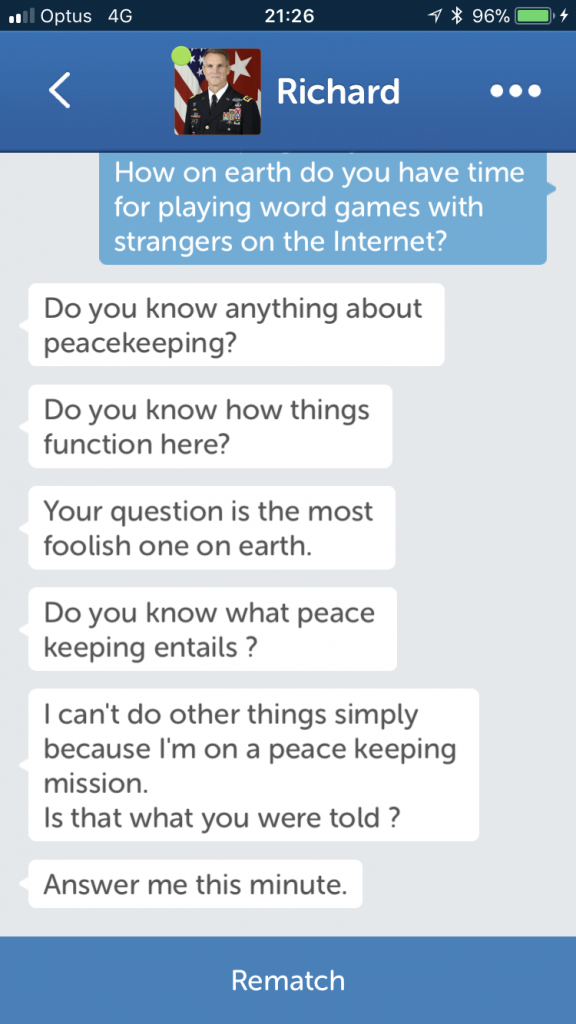 Errr… whoa there Nellie!?  That seems kinda special.  😮
Now I’m not one for being ordered to do anything, and especially not from a total stranger on the Internet. But curiosity kills the whatsamadoover and all that… 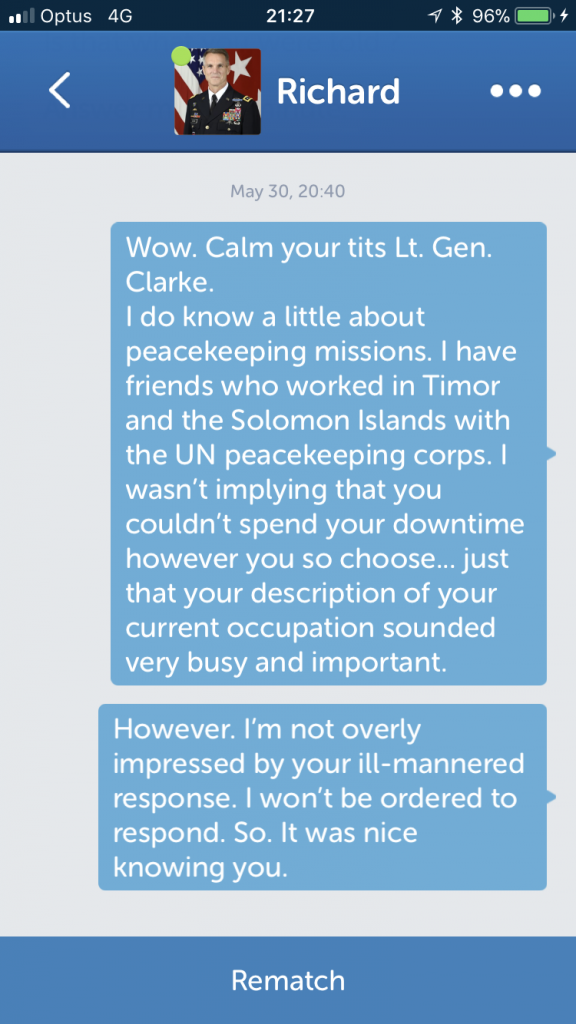 And I was going to leave it there – but at this point I was pretty convinced that this wasn’t Lt. General Richard!!,, but rather more likely, a fucking boorish stockbroker named Ralph living in his Mom’s basement somewhere.

With minimal effort (a single Google Image search and a response within microseconds) the photo of this very smartly Lt General in the US military with the name, Richard CLARKE (Yes Dick, the name badge is quite legible in the photo) was not exactly hard to find, and according to the profile that Ralph probably stole the photo from, he’s a Director for Strategic Plans and Policy for the Joint Chiefs of Staff!   IE:  someone you would very likely imagine is way too busy to be playing stupid word games with strangers.

So I decided to throw an extra volley across the bow… 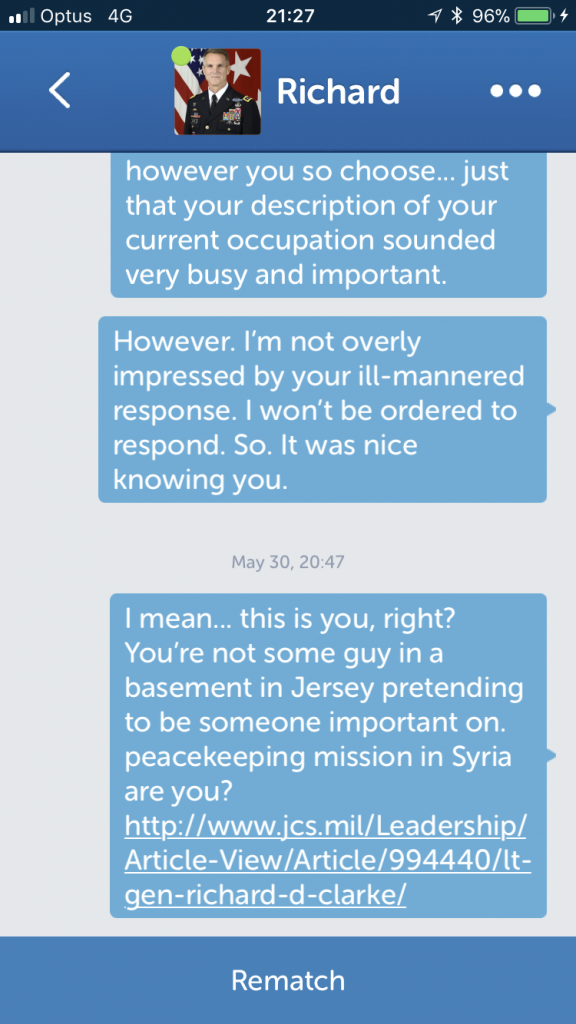 Predictably, Dick didn’t respond and ended the game…
What a shame.  He was winning too.  :/