Unto the prodigiously patient Populace of Lochac does King Niáll and Queen Sabine send warmest greetings.

We are pleased to announce the following list of honourable combatants who have signalled their intention to fight for the Crown of Lochac at the upcoming November Crown tournament being held at the Canton of Stowe-on-the-Wowld, in the Barony of Rowany.

Given the healthy numbers contesting the Crown – at this stage, We anticipate that the tournament will be conducted as a standard single kill, double-elimination tournament. We look forward to witnessing great spectacles of prowess and chivalry on the field, and wish all combatants and consorts happy preparation for the upcoming tournament!

As ever, We are Yours in Service to Lochac

Unto the Good Gentles of Lochac does Niáll and Sabine send warm greetings.

It is with long held anticipation that We look forward to tomorrow’s tournament and festivities. We do, however, have some updates for you all:

Master William Castille and his consort, Mistress Katherine Alicia of Salisbury, as well as Sir Kitan von Falkenburg and his consort, Baroness Alesia de Cheval Blanc have regrettably had to withdraw from the Crown Tournament and We will unfortunately not have the pleasure of seeing them upon the field tomorrow.

Further, We acknowledge there are considerable mundane travel impediments impacting quite a number of Our intended combatants at the moment. We will do Our very best to accomodate those impacted by inclement weather conditions. We beg the Populace’s indulgence and understanding as We may need to be a little flexible with the intended start time of the Crown Tournament.

Yours in Service to Lochac

Unto the bountiful and beauteous Populace of Lochac does Queen Sabine send warm greetings and hearty salutations!

This last weekend saw the North celebrating the annual Battle of the Bottony Cross. A huge congratulations to Duke Sir Gabriel (Alex West) and his fabulous team on such a wonderful even that holds a special place in Our heart.

Our Royal Team consisting of my champion Sir Leofric (Lee Laver), Sir Henri (Josh Lehmann) and the most recent armiger of Our realm, Lady Dianata, acquitted themselves on the field most admirably on Our behalf, and appeared to have a wonderful time  doing so!

Congratulations to Duke Sir Master Alaric (Stephen Parsons) who was Pelican’d in a truly lovely ceremony (video to follow). A wonderful even was had by all, and such a magnificent feast was enjoyed – Our compliments to the feasting team!

Yours in Service to Lochac, 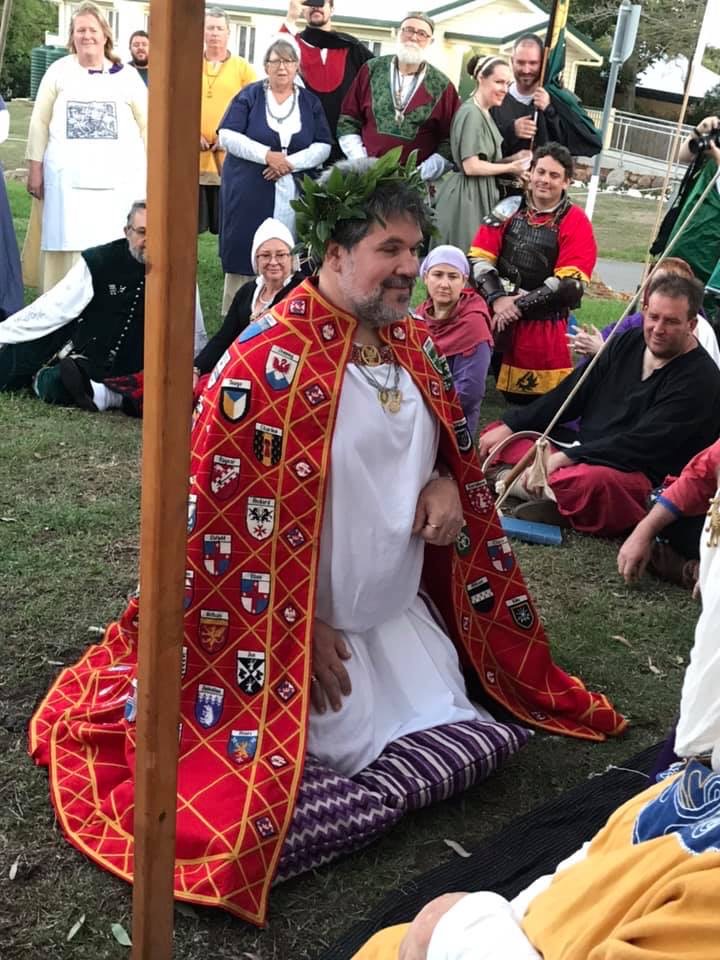 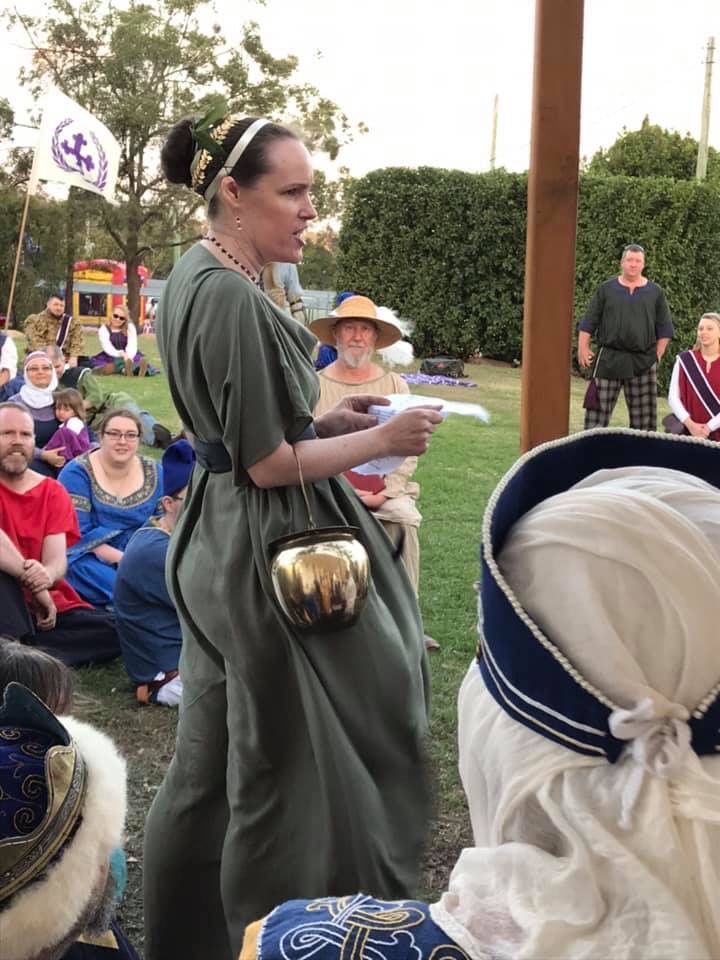 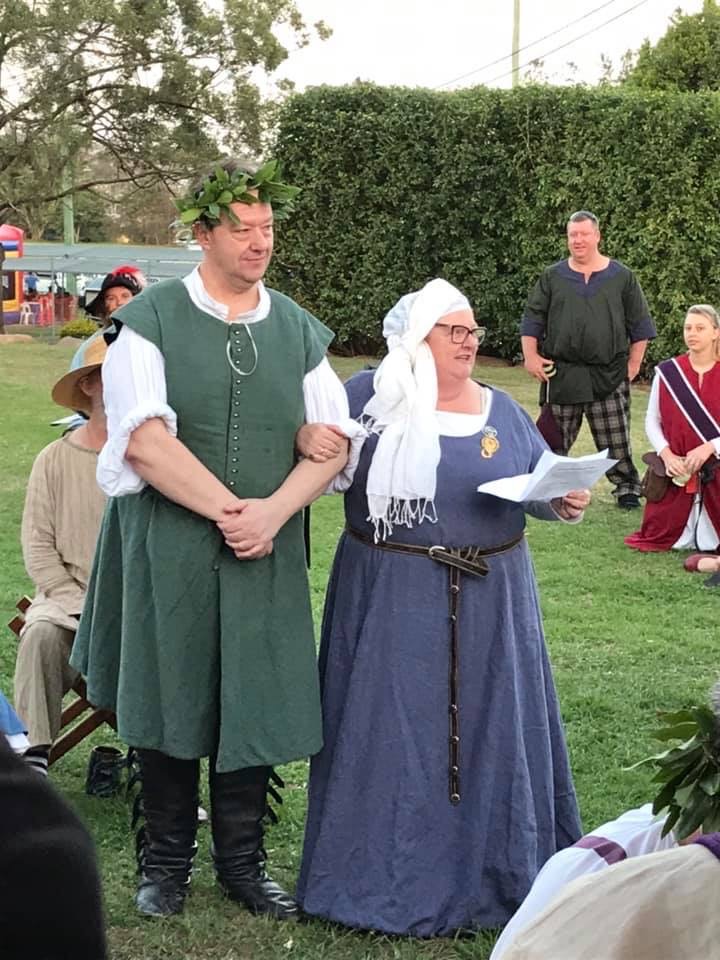 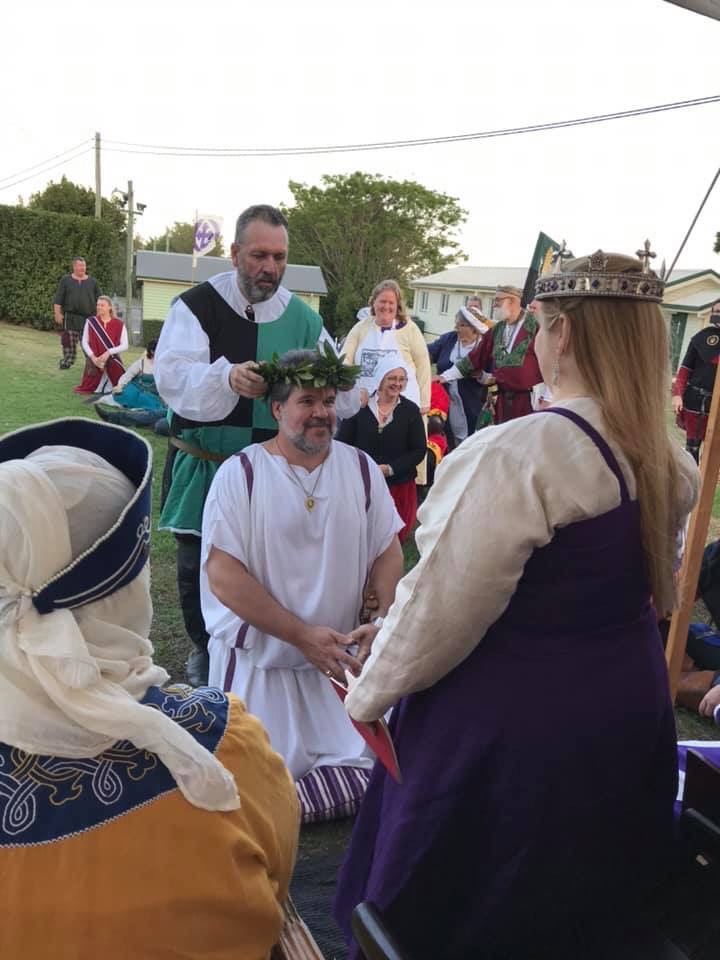 Unto the fair and far-flung Populace of Lochac does Niáll and Sabine send warmest Greetings!

It feels but yesterday that We stood up as your rightful King and Queen, yet it is already time for Us to start seeking Our Heirs. We are therefore minded to call for Letters of Intent from those wishing to contest November Crown which is being held at Stowe on the Wald, in the Barony of Rowany. These letters serve as a formal introduction of Yourself and Your Consort.

For those that would contest the Crown – Let it be known, that We have been informed by the Baronies of Ynys Fawr, Southron Gaard and Mordenvale, that they soon intend to go to poll with a view to potentially handing over to their chosen Successors during the next reign.

We specifically request that all combatants do their utmost to present themselves on the field with a consistent heraldic presence in keeping with their persona, and with well-maintained armour that is in proper and goodly working order (Please, no visible mundanity, such as tape etc). Should there be any queries about these requirements, please feel free to contact Us.

Please address your Letters of Intent to: [email protected] and be ensure to include the name and contact details of yourself and your consort. We will respond to each letter received, so if you have received no response within a couple of days, please resend your missive.

We are prepared to receive Letters no later than October 25th; the List of combatants will be published shortly thereafter.

Yours in Service to the Crown and Kingdom of Lochac 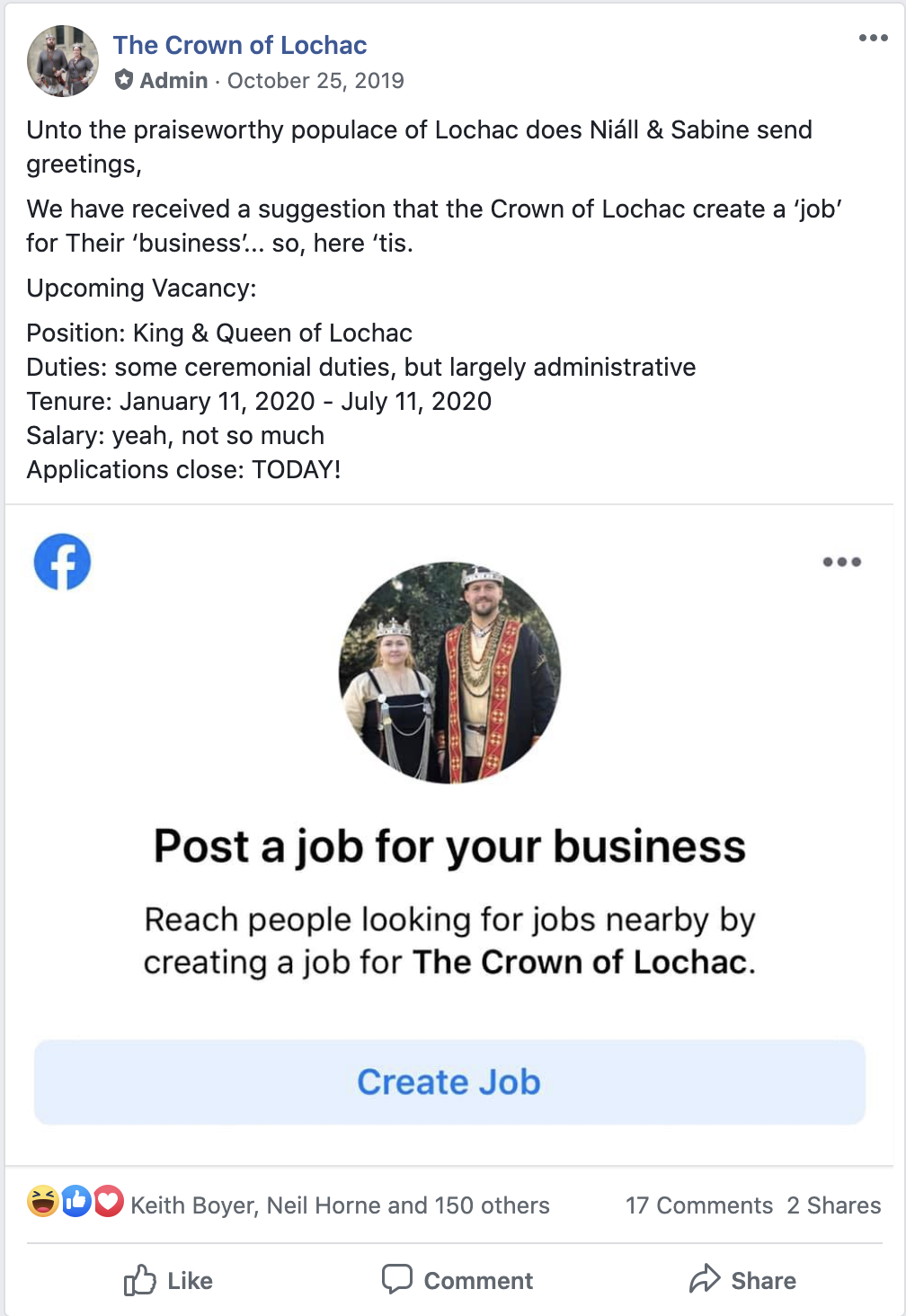 Greetings good populace on this Most Auspicious Monday morning. We do hope you All have had a wonderful weekend, filled with eventing and crafting and fighting!

As many of you may have seen, on October 19, 2019, the following change to Corpora was approved:

Each competitor in a Royal List must be fighting for a prospective consort.

We welcome this change to Corpora and remind you all that Letters of Intent to contest the Crown of Lochac at the upcoming Crown tournament being held at Stowe on the Wald are due in by October 25th.

Yours in Service to the Crown of Lochac,

Unto the now peaceful, but perpetually pleasant Populace of Lochac do Niáll and Sabine send warm Greetings!

It is with hearts filled with friendship and heads filled with new memories that We return to Our respective lands after an eventful Spring War – the Queen to Our fine estates in the North; the King to Our political heart in the South.

Firstly, We bring glad tidings that His Excellency, Sir Rufus is once more in true and proper fealty to the Crown! Suitable taxes have been promised. Bread has been broke, and all is once again well in the Kingdom. The mysterious wars that keep breaking out at this time of year are once again at bay.

Further We have had the honour and the privilege of seeing the Good Sirs Rowland Bridgeford and Henri de Montferrant admitted to the right noble Order of the Pelican – each for their many years of outstanding service which has always been such a bounty to their households, their baronies and to the benefit of Our Kingdom. We send Our heartfelt Congratulations to the Masters Henri and Rowland.

It was also Our pleasure to announce that Lochac’s ‘Great Matter’ has been finalised in accordance with the Populace’s wishes, and the Crown Events date changes are to be implemented as of November Crown 2020. The upcoming Seneschal’s missive in Pegasus will contain more details on this Great Matter.

After such a wonderful event, We needs must thank Our wonderful hosts, the Barony of Modenvale. To Their Excellencies, Sigrid and Ulf, the stewards, cooks and event team – We would say ‘Thank you!’ and ‘Huzzah! Well done!’ From the excellent site accommodations and the very entertaining Mordenvale Þing, to the fabulous night markets and the simply marvellous Queen’s High Cheese! Such a wonderful event was enjoyed by all. We extend Our thanks and congratulations to the many hands involved in such an amazing event.

Yours in Service to the Crown of Lochac.
Niáll & Sabine 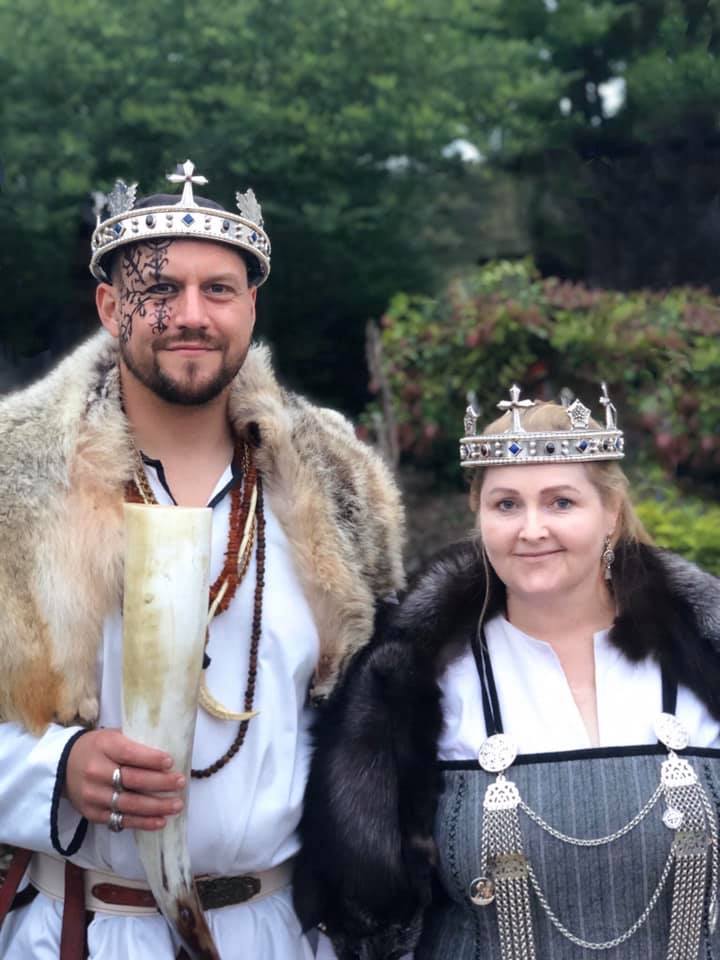 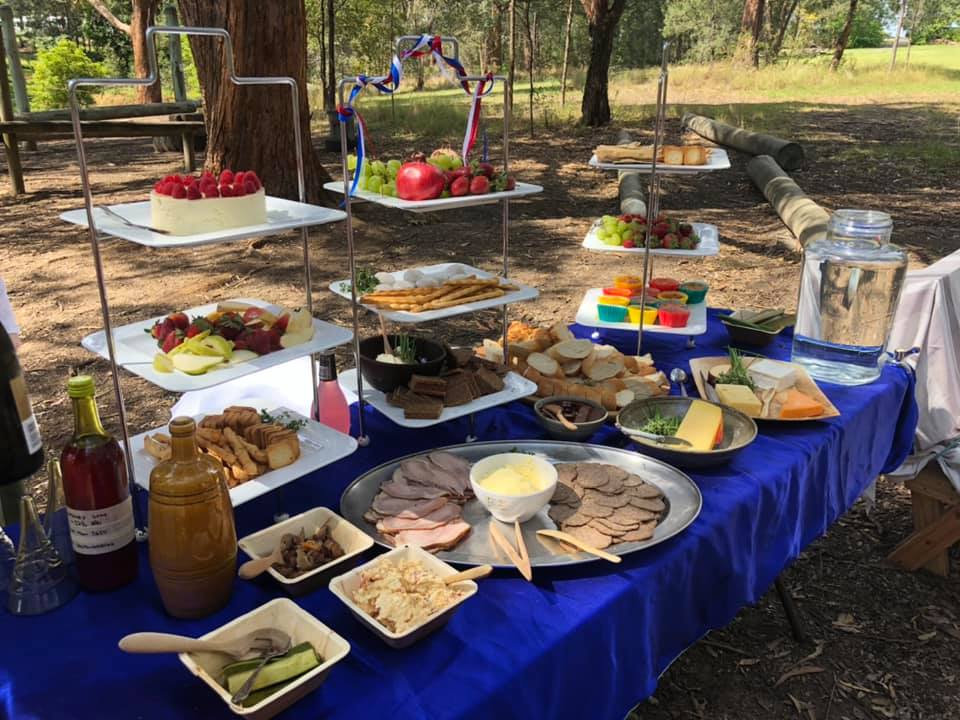 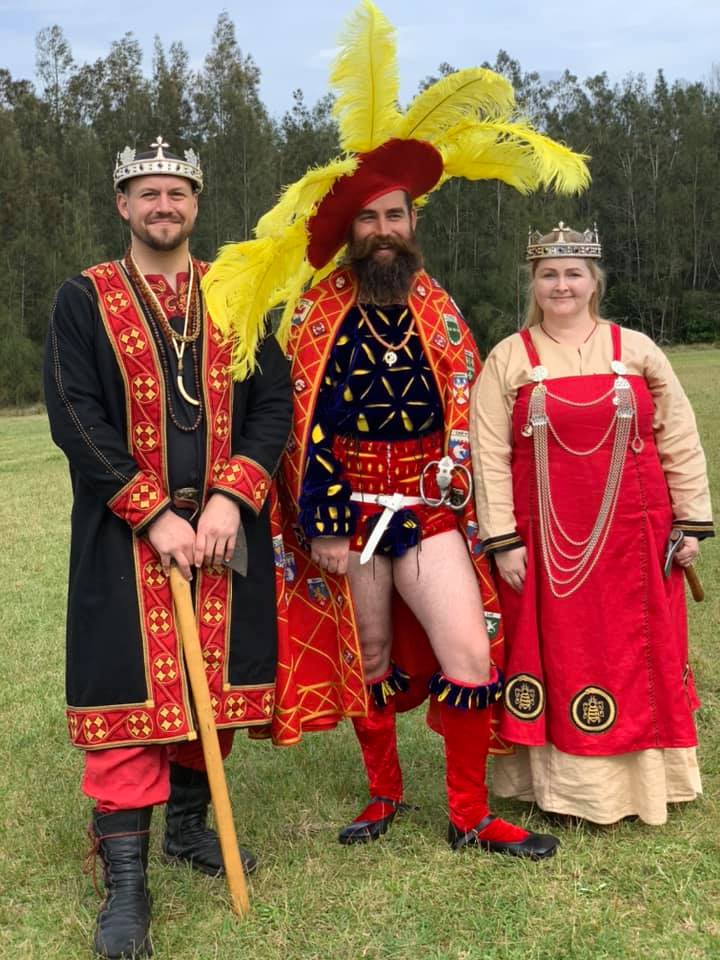 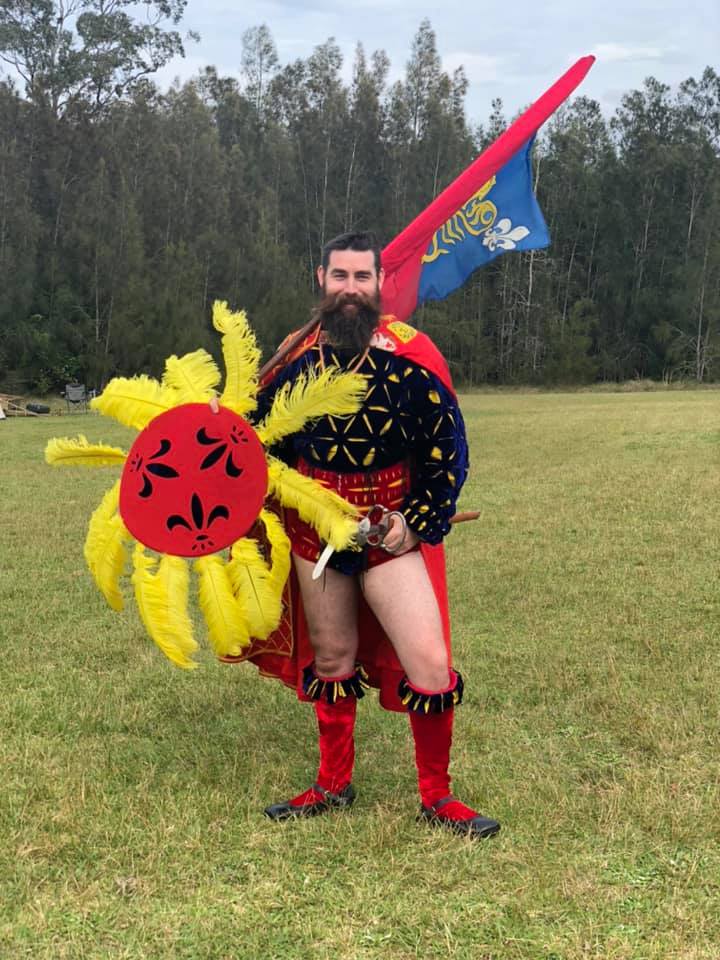