… and even though I’m feeling positively exhausted my back is already telling me that I’m going to have trouble sleeping tonight.  🙁   I’ve been having so many consecutive nights of very poor sleep the last week or so that I’ve been upping my valium and other drugs in an attempt to overcome it.  And when that still hasn’t been working so great I went and made myself a ‘Counting Sheep’ playlist on my iPod which consists mostly of Tony O’Connor relaxation music.  The Rainforest Magic album I acquired recently but the Seashore Sunrise one I’ve had for ages.

But that doesn’t seem to be helping a great deal either though… need some more strategies to get some decent sleep.  Preferably without alarming drug induced nightmares in the wee hours.

This afternoon I had 20 mins where I felt absolutely NO BACK PAIN.  It was amazing almost unbelievable to not be feeling the usually constant pain even for just that short period of time.  I can’t remember the last time I felt like I had no pain whatsoever.   It was wonderful.  Blissful even…  and a whole 20 minutes!

And what was it that bought about this momentary miraculous mid-afternoon sojourn?  It’s a worthy question.  What could possibly accomplish this incredible feat where intestinal fortitude and modern medicine (including morphine) has failed?  Well I’ll tell you.  I went and had my legs waxed.  😐  And as soon as she started ripping my body hair out of it’s folicles with hot wax… well the back pain just melted into the background.  It was the most relaxed and pain free I’ve felt in I don’t know how long.

And it last for a 20 whole glorious minutes….

When the Small Child started at the Catholic school I worried for the first few months there that he’d out us for the godless non-church going hypocrites that we are.  The concern turned out to be all for naught as it has eventually became evident that most of the parents at the school are also non-church going hypocrites too.  Yay for the whole birds of a feather thing!  I mean I wanted the Small Child to attend there because I know it’s a great little school with excellent programs and an educational environment where a modicum of respect for the teachers, parents and other students is encouraged and expected…. but you know that’s just me.

We switched the Small Child to the god bothering school after a few unsavoury incidents* reminded us (well mostly me) why I was generally prejudiced against public schools in the first place….. and I figured that being raised a Catholic hadn’t left any permanent damage on me (twitch, twitch) so we Teflon coated the Small Child and figured he’d be fine.  I’ve noticed that it’s still a great school – but things have changed.  It seems that it’s no longer the educational oubliette of hellfire and damnation that I remember with such fondness but rather it’s become more like a well mannered presbyterian youth centre really.  Plenty of warm fuzzies but a little light in the ‘smiting from on high’ department (thank fuck).

It’s supposed to be that time of year when the whole Lent thing gets trundled out and there’s a story about the 40 days and 40 nights, lectures about sacrifice, an expectation of some personal forfeiture for the duration and a bit with a fish (on Fridays).  Somewhere the schedule appears to have changed…. the teachers had arranged a special Pancake Tuesday (not Shrove Tuesday, note) breakfast of pancakes with jam and maple syrup etc.  Normally this preceeds Ash Wednesday where they used to trudge us over to the church for mass (with the purple bits yeah?) and the little ash crosses on the forehead bit and then back to class to write up what we were ‘giving up for lent’.  Well that’s how it went when I was little.

The Small Child’s class however only did the pancake bit and weren’t taken to mass and there was no ritualized application of oily burnt vegetation whatsoever.  I mean what’s wrong with this picture?  No fire and brimstone?  No drumming it into the hapless children what horrible sinners they are?  Tut tut tut.  My how things have changed…. Sr Mary Gabriel would be turning over in her grave!  (I’m pretty sure that miserable old woman would be dead by now… but the old ladies they do tend to live forever sometimes.)

Personally I’d like to be able to give up prescription medication for Lent… but then I wouldn’t be able to be burried in consecrated ground so there goes that idea.  Anyway I’m no longer worrying that the school will find us out to be Godless heathens… but rather maybe they should be starting to worry that We (the parents) a’re onto them and we know they’re only doing a fraction of the amount of God bothering we expect for our exhorbitant school fees!   🙂

END_OF_DOCUMENT_TOKEN_TO_BE_REPLACED

Music has always played a bit part in my life.   I always choose music to play in the house or in the car based on what sort of mood I’m in or what sortr of day I’m having.  I know I often deliberately try to pick things to listen to when I’m not really in the mood for it, in an obvious attempt to change how I’m feeling.  Occasionally it works but sometimes it’s a a bit much to expect to immediately become all Cat Empire when you’re actually feeling all Pink Floyd.

Keeping it to only 20 may be the challenge… 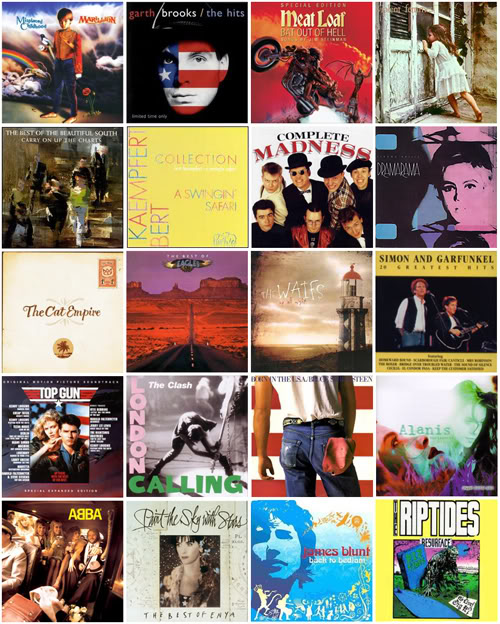 It’s been two whole days that I’ve had no one around to talk to and to keep me occupied and entertained… and I think last night’s post demonstrated most admirably that I’m driving myself crazy already.   Though some of the blame for that maudlin mess can be laid squarely at the feet of most of a bottle of Yellowglen Bella – it would have been a whole bottle if I weren’t so un-co and dropped the half empty bottle on the kitchen tiles and splashed champagne all over the floor, the walls, the pantry doors and even on the ceiling  😐  but that’s neither here nor there.

I have always known that I’m not overly fond of my own company.  I’ve always felt a need to have other people around or I get ridiculously bored.  That or (as is happening at the moment) my back pain is totally getting on top of me because my brain isn’t engaged and I’ve spent a large portion of the last two days crying and rocking in a corner somewhere…. well not quite literally but you get the idea.

Yes it’s a conundrum… I don’t want to go out and don’t want to be with ‘people’ and am generally feeling very antisocial, yet I’m not even remotely enjoying the solitude.  Add to that my own particular little weirdness about being really fussy about who I want to spend time with at the moment and I’m all at sea.    ‘Beggars can’t be choosers’ my Mum would say… but I am sometimes unreasonably picky about who I want to let into my weird little world and have in the past gone to extraordinary lengths not to be stuck with certain people for more than ten minutes together.  Strangely enough it’s often been noted that people find me easy to talk to and often feel comfortable confiding in me… but at the same time I’m told that I’m sometimes very hard to get to know.  Yeah I know that doesn’t make any sense at all and I’ve no idea how that works.

Anyway two days of my own odious company and it’s already laughable.  I was so desperate for someone to talk to that I called my cousin (who is in the middle of a traumatic court case) knowing full well that she’d keep me on the phone for at least a good hour which is something I’d normally avoid at all costs!  And this morning I went shopping for parfait spoons and even though I knew exactly what I wanted and found them within two minutes of walking into Myer… I pottered around for an hour and a half so I wouldn’t have to go home and be by myself.

I’m so not myself at the moment that I nearly phoned a hairdresser in Carina to make an appointment to have a haircut.  I mean seriously!?!?  If that isn’t a red flag going up I don’t know what is!  I haven’t been to a hairdresser since 1995!!!

Sigh… I do know that hanging around the house by myself after only a couple of days is already having detrimental effects.  I’ve find that I’ve been talking to myself which in itself isn’t so bad – except that I don’t always agree with what I have to say and that is exhausting!
.