Twenty four and a half years ago, a bunch of excited wannabe metal heads packed themselves into their crappy, barely roadworthy cars, and drove down from Brisbane to the PlayRoom on the Gold Coast, to see what was promising to be one of the biggest gigs of the year…

This was huge.  We had been looking forward to this gig all year, and after we had finished ignoring Frozen Doberman for about 45 minutes or so, the mosh pit packed tighter as Motörhead came out on stage and opened hard, and stupidly loud, with ‘Ironfist’ assaulting our eardrums – the sound waves physically beating our chests thanks to the Marshall stack from hell covering all the walls barely 15′ in front of us.  Sadly, the whole thing fell apart in a spectacular and rapid fashion when some idiot in the crowd threw a beer can at Lemmy. He warned the crowd to wind their fucking heads in.

Some complete wanker who was obviously stoned, or missing a few neurons, (or both!), decided to flail a second beer can at the biggest, nastiest looking, motherfuckin’ rock legend the PlayRoom had ever seen. And then, Lemmy pretty much said, ‘Fuck you lot’ and just kinda walked off, leaving the rest of the band momentarily confused before they up and followed him.

Some reports say they played about 5 or 6 songs, some say only 3.  My recollection is more, ‘Fuck! What?! They were just getting started!’ We were unceremoniously herded outside the venue as the crowd was turning ugly – angry people milled about, cops were called, punters were demanding their money back, dog squads arrived, disheartened fans took pictures of Lemmy’s ugly mug out of cherished silver lockets and burned his image on the spot… ok, only one fan (that I know of), burned a tiny cut out picture of Lemmy’s wart covered face that night – any idea who that might be, BigSal? – but you get the idea. We dispersed into the night and never got the chance to see Motörhead play live again.

The incident went down in local metal folklore and still holds a place in various lists of rock’n’roll disasters.  The acrimony towards Lemmy was short lived… one can only be so mad at God for so long.

RIP Lemmy… thanks for the music. 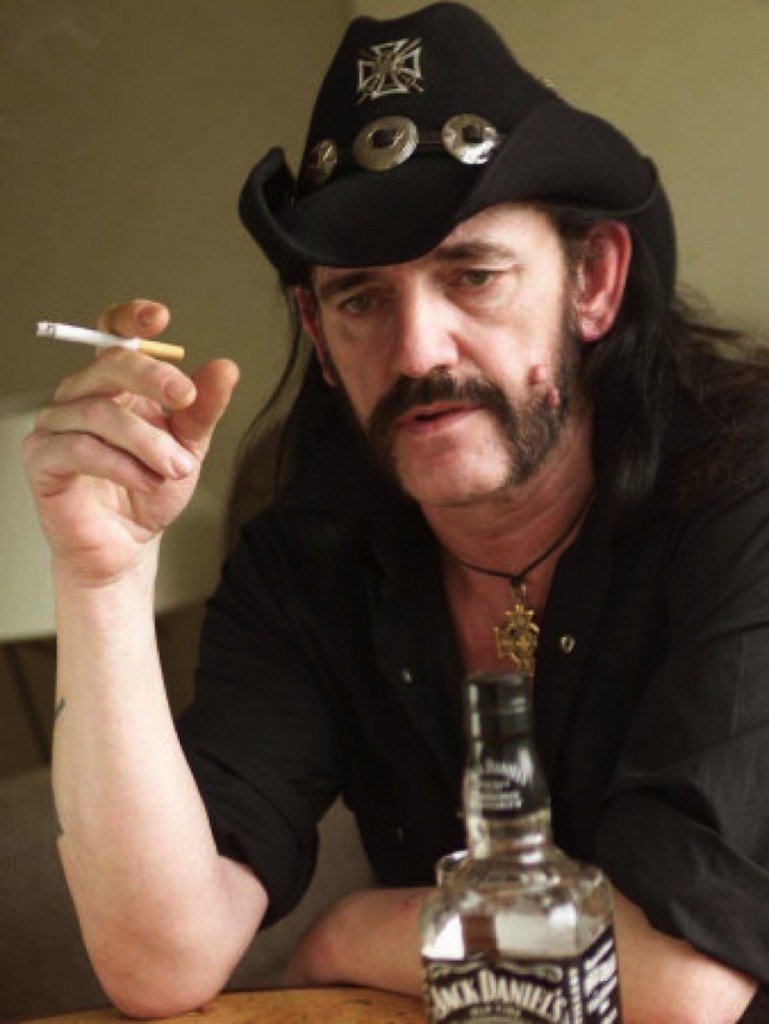 “1991 also saw us support MOTORHEAD on the 1916 TOUR at the now deceased GOLD COAST PLAYROOM. It went down in local folklore for a few reasons, not because we played, but MOTORHEAD only played about 5 songs and walked off pissed at the dumb crowd who threw cans at them, we were left with their rider..we drank till oblivion..trashed their dressing room, almost got our arse kicked by management and high tailed back to Sydney with stupid arsed grins on our faces. Our management was contacted, threats may have been made, deals probably done. We chose to move on. We never did play there again.”
Adam (vocalist) – Frozen Doberman

“Oh yeah. We played on the Gold Coast in Surfers Paradise one night. We had 1500 people there. It was packed. “

Of course, there is always the ugly and that came in the form of their performance at the Gold Coast’s now defunct Playroom in 1991 where punters were hurling beer cans stageward early on during Motörhead’s performance. After warning the crowd about stopping the show if their behaviour didn’t cease, Motörhead simply walked off stage after only a few songs.

“Yeah, fuckin’ right y’know? I’ve had fireworks just miss my head. The worst one for me was in Belgrade in this festival. Somebody had taken the time use a glass cutter to chop off about that much (his fingers indicating about a 1cm) off of the bottom of a wine bottle and then shape it into a nunchaku star and fuckin’ throw it at me. It missed my eye by about that much (again indicating with his fingers about 2cm from the right side of his face). I just fuckin’ walked off. The promoter was shittin’ himself. I said, ‘I ain’t fuckin’ goin’ on man. You can forget it!’ They convinced me eventually and they assured me that it wouldn’t happen again. It just ruins it. It somebody doesn’t like me or whatever if I fuckin’ shagged his sister years before and, probably I have,” jokes Campbell. “People throw stuff at me like that and go ‘Hey wanker!’. I say ‘What’s your problem? Did I shag your girlfriend last time?’ There’s no need to throw stuff. I don’t know why they bother to come. It’s not cool to do that. We can’t see nothing. We’re in the dark. It’s cowardly. If you wanna come up, come up afterwards and say ‘C’mon, I wanna fuckin’ punch you Phil!’ y’know?”
Phil Campbell – Lead Guitarist Motorhead (via The MetalForge)

I am sooo glad I don’t have any friends like this on my Facebook… Brendan that is, Robert’s a dude.   😛 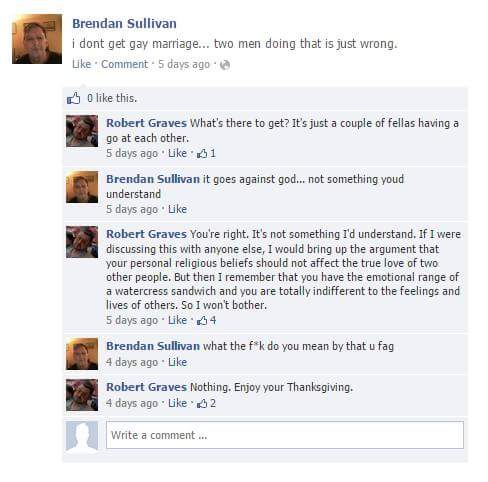 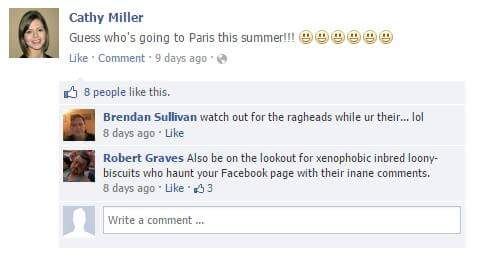 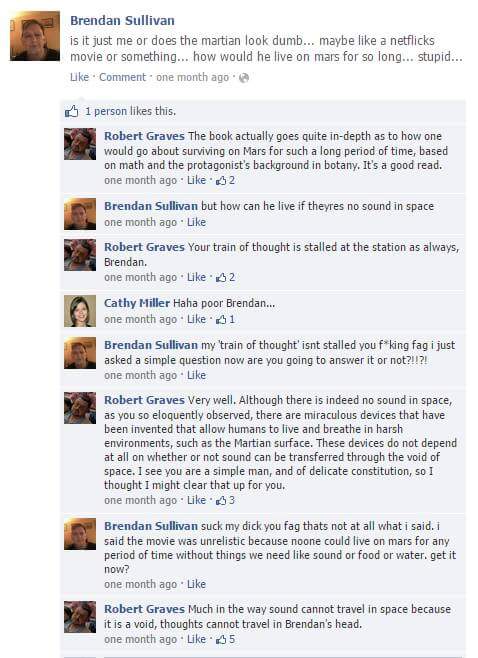 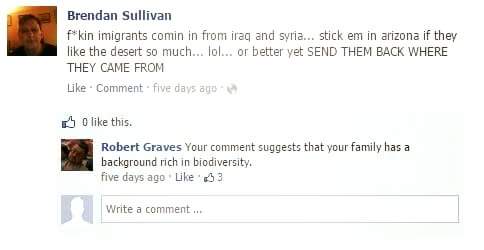 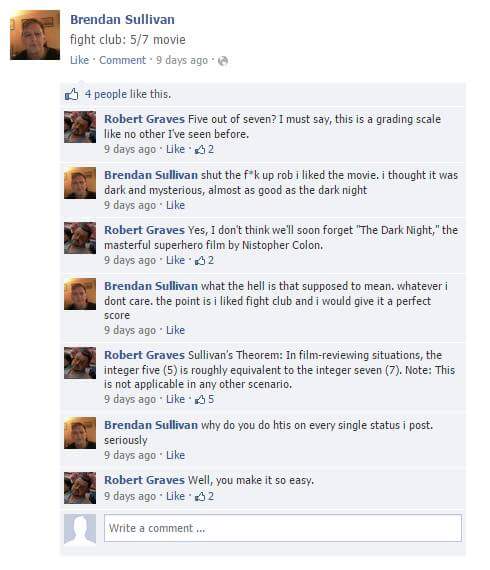 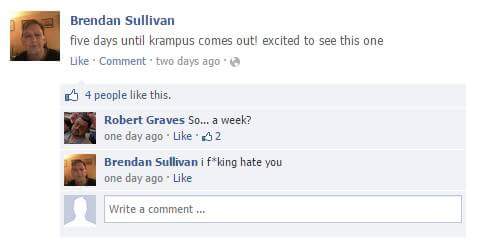 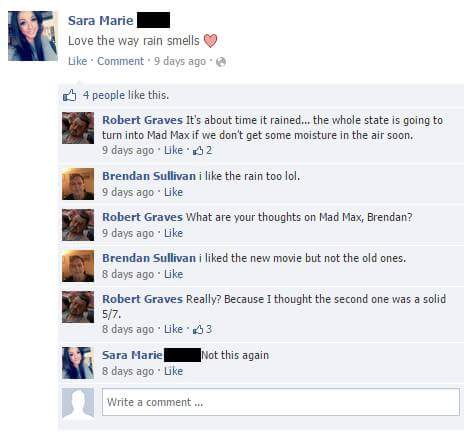 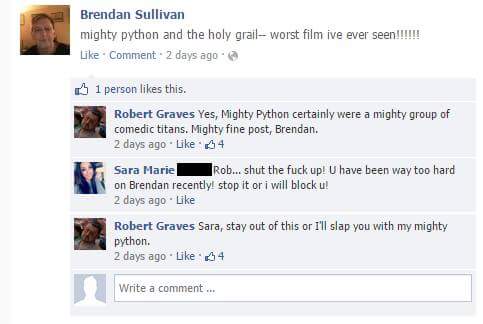 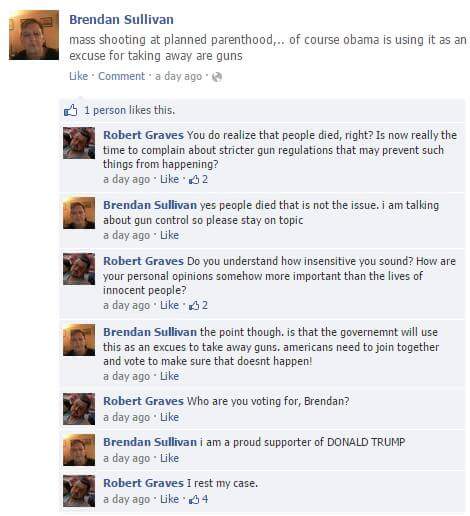 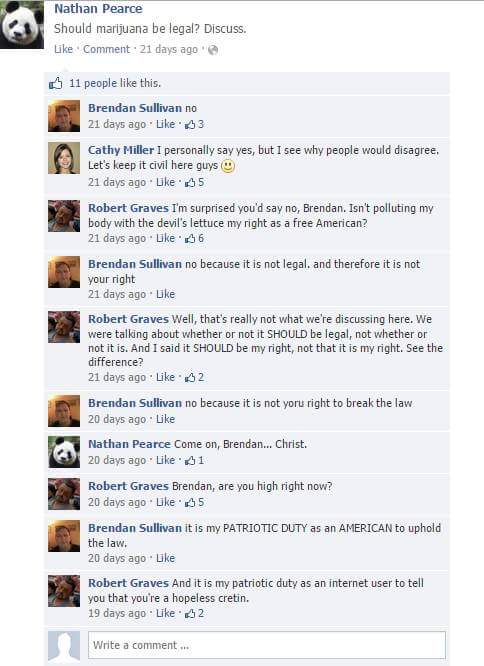 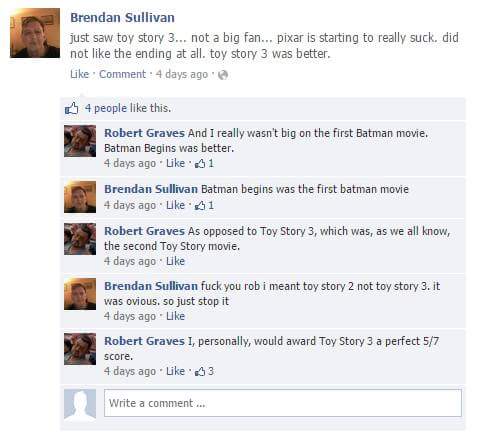 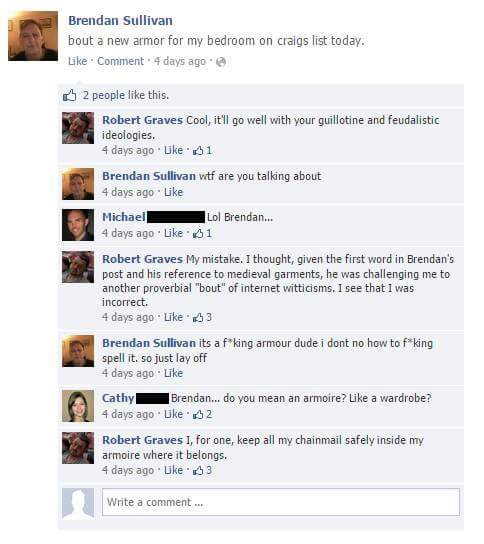 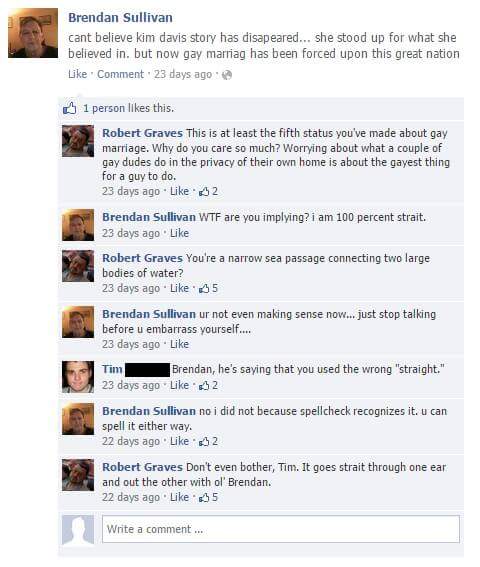 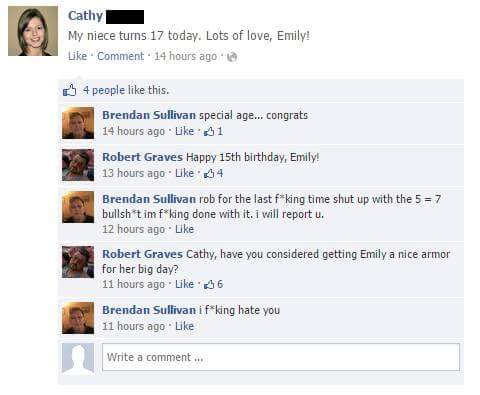 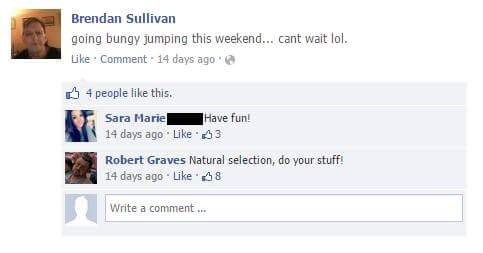 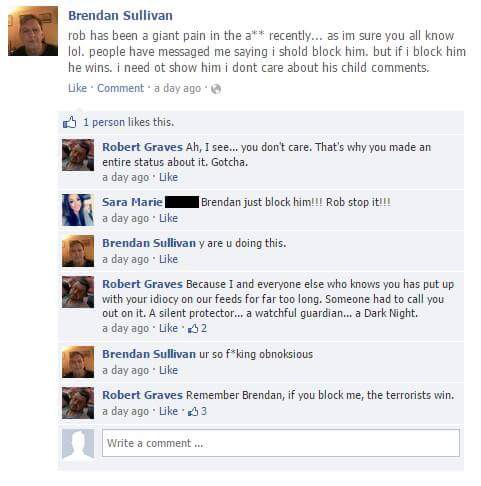 Our last port on this trip was another island tender port to Doini Island.  Doini is quite simply the most beautiful and idyllic Pacific Island I have ever seen.  Simply stunning in its picturesque beauty – just postcard material.  The weather was lovely, the people were friendly and welcoming, the sands were clean and white, the water was cool, refreshing and amazingly clear.  Just fantastic. 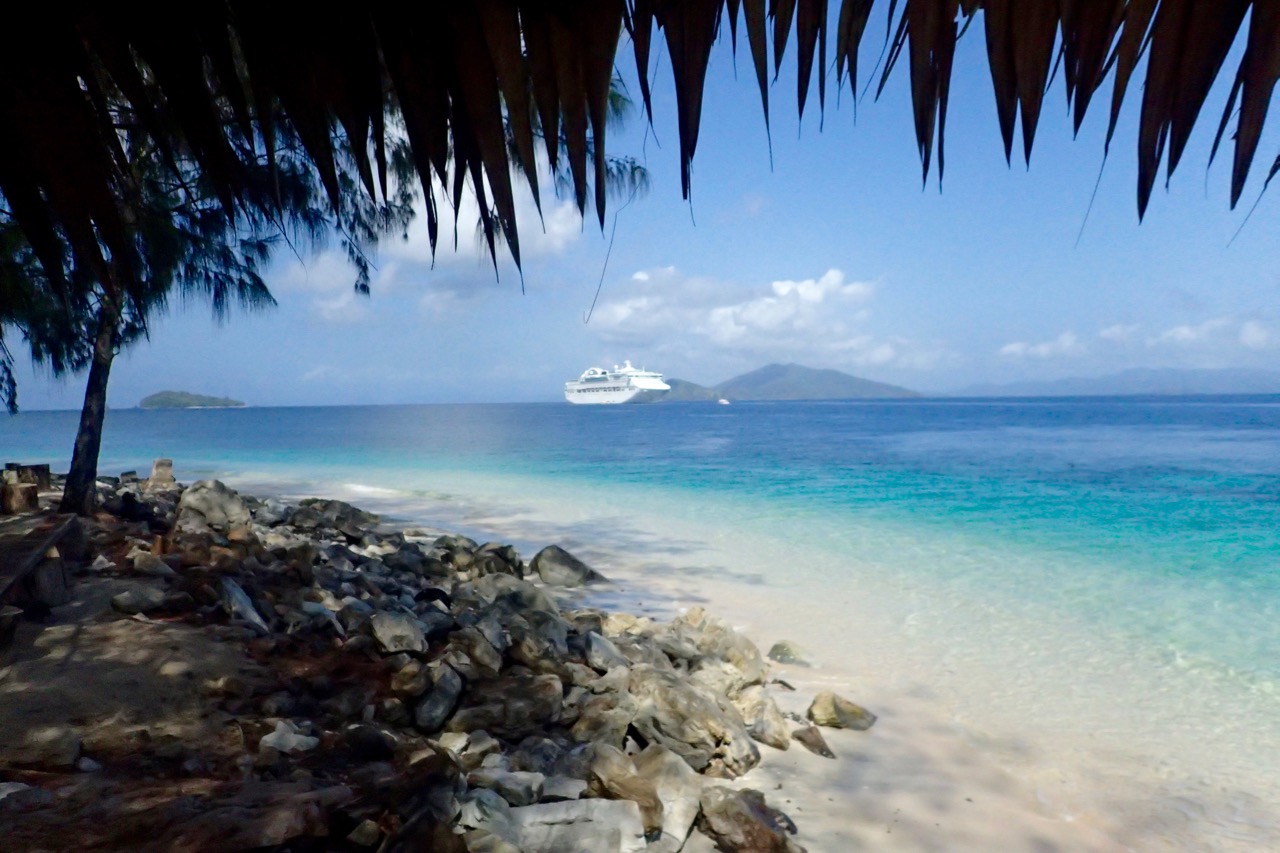 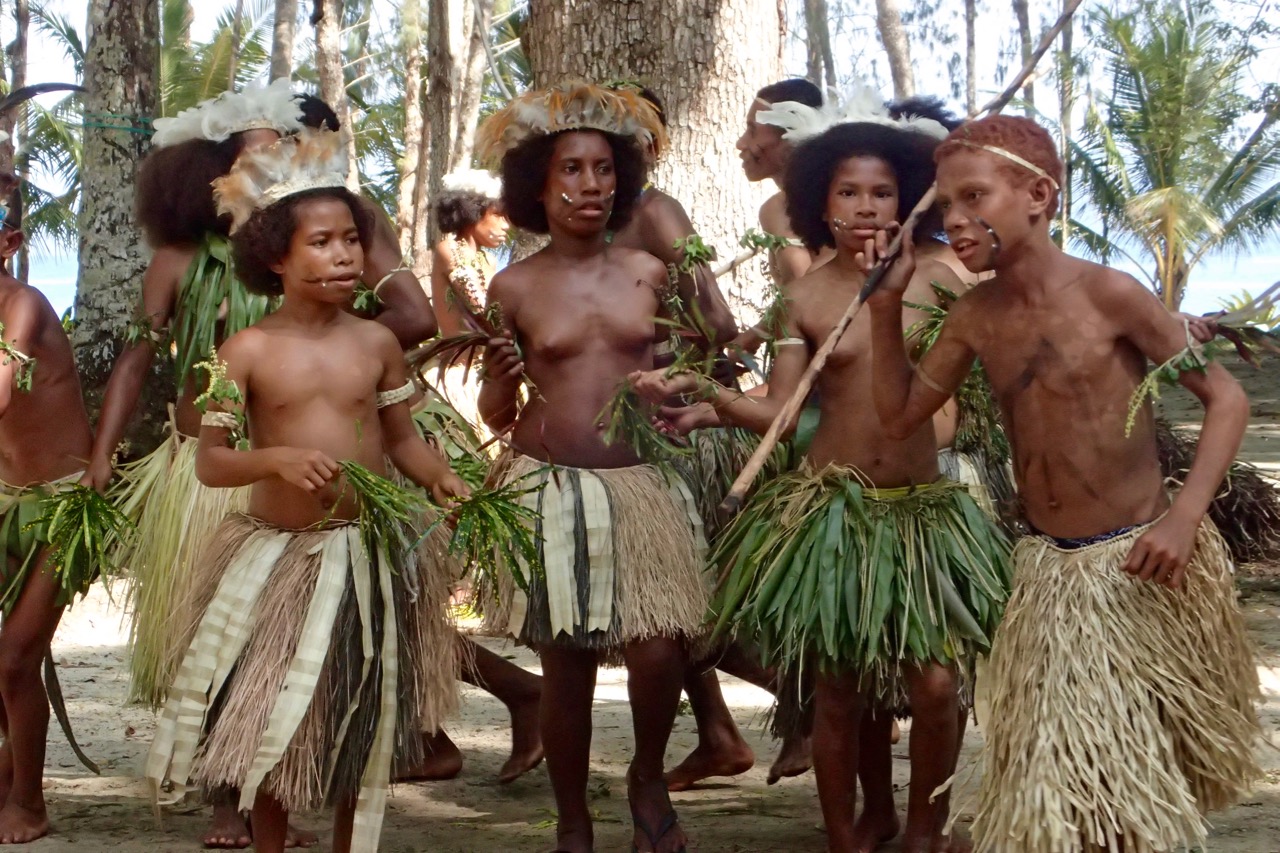 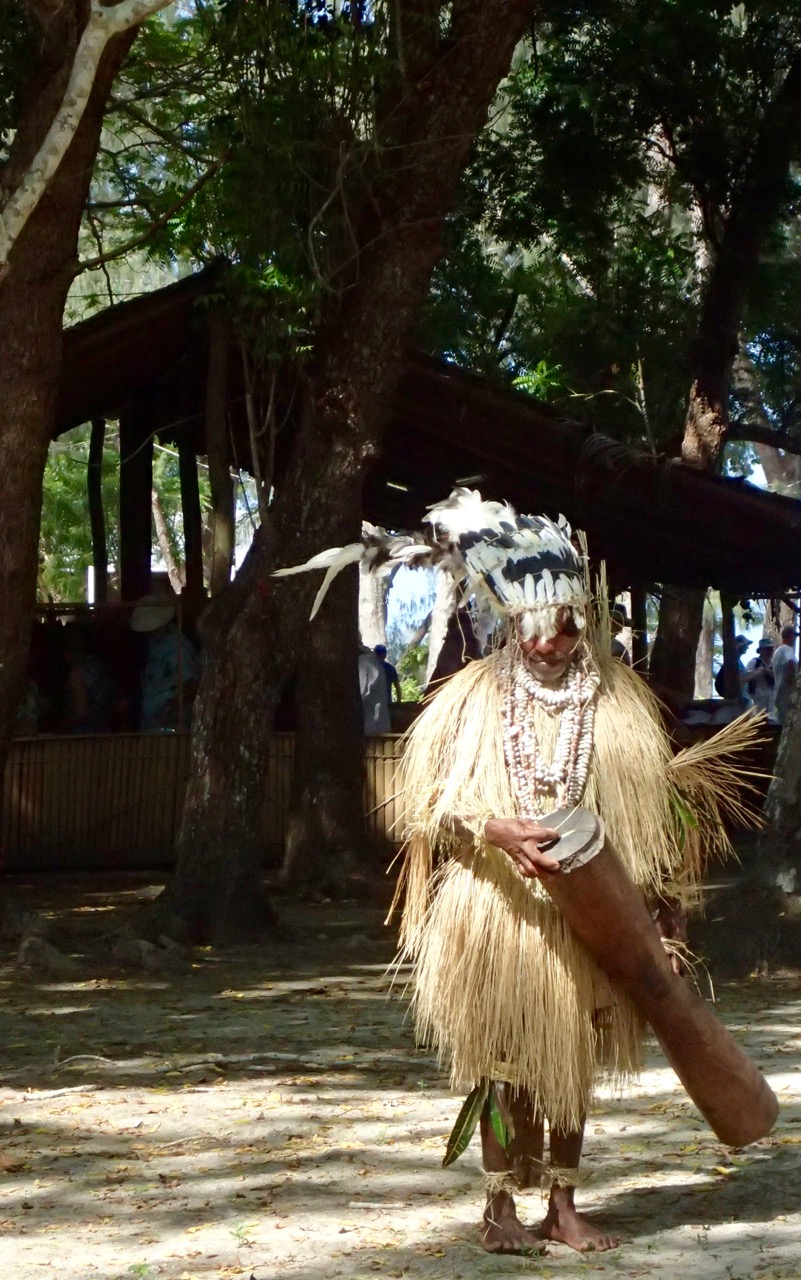 There is plenty to do here – take a boat trip or sit in the resort and have a beer, swim, snorkel, jump off the jetty, read a book under a tree, just chill and take in the island atmosphere.  You can walk around the entire island in two and a half to three hours and there are more anthropological cave sites to explore.  There is an eco resort on the island that can be reached by boat from Alotau (flights from Australia to Alotau are becoming more frequent and affordable from what I understand) and I can totally see myself coming up here, armed with snorkel gear, hammock, reading material and just enjoying the island.  Hardly any people (except when a cruise ship happens to come in) and no where to be and nothing that needs doing – sounds like bliss.  I have a strong feeling I’ll be back in Doini at some time over the next few years… before it gets too over run by tourists and starts to feel like Vanuatu.  🙂 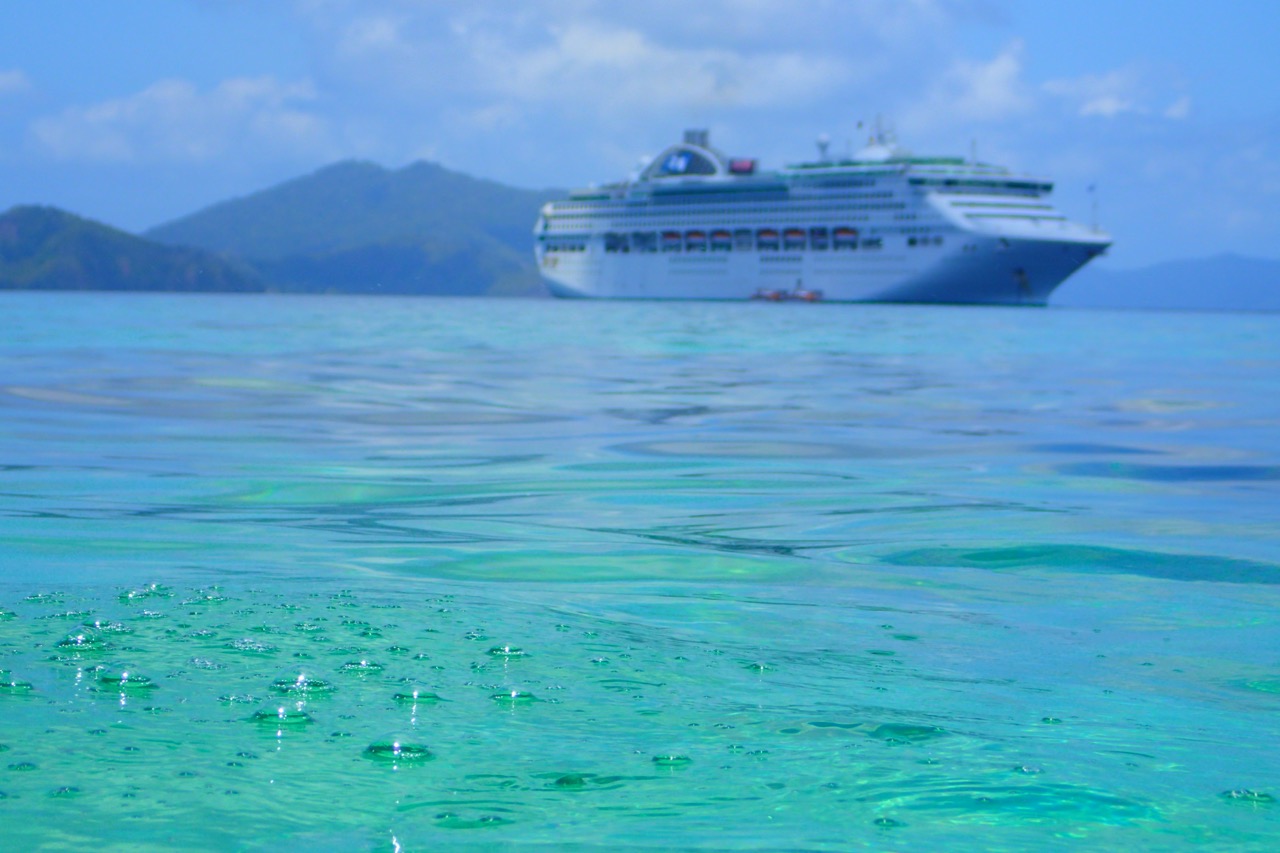 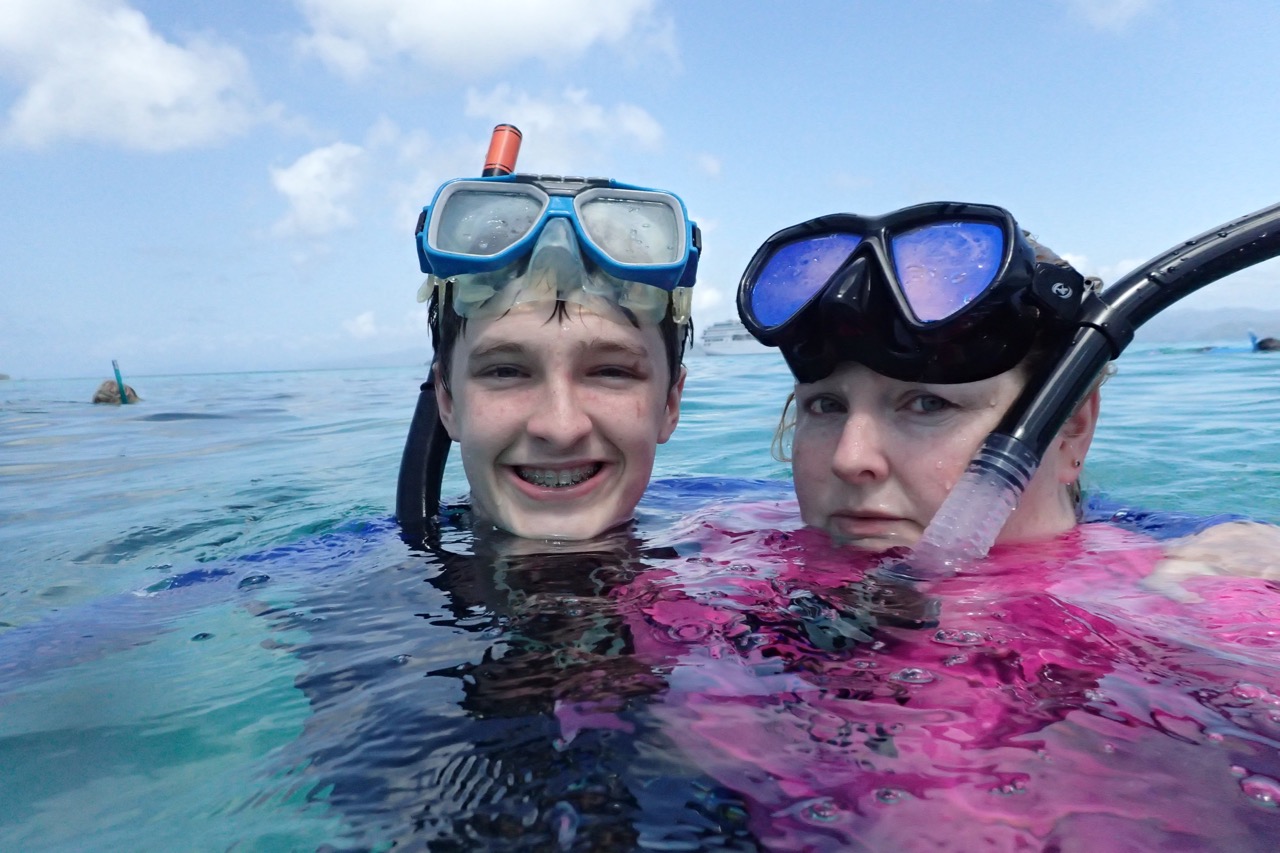 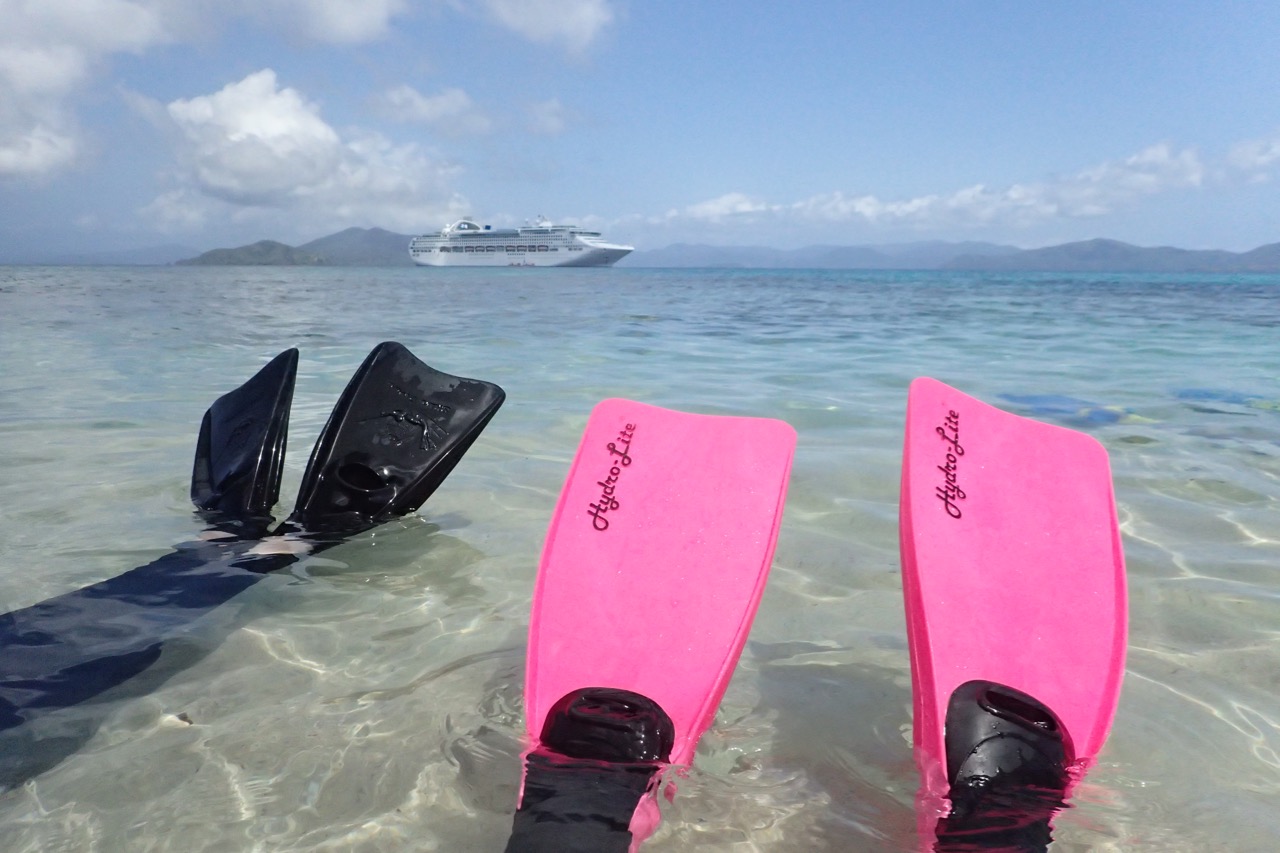 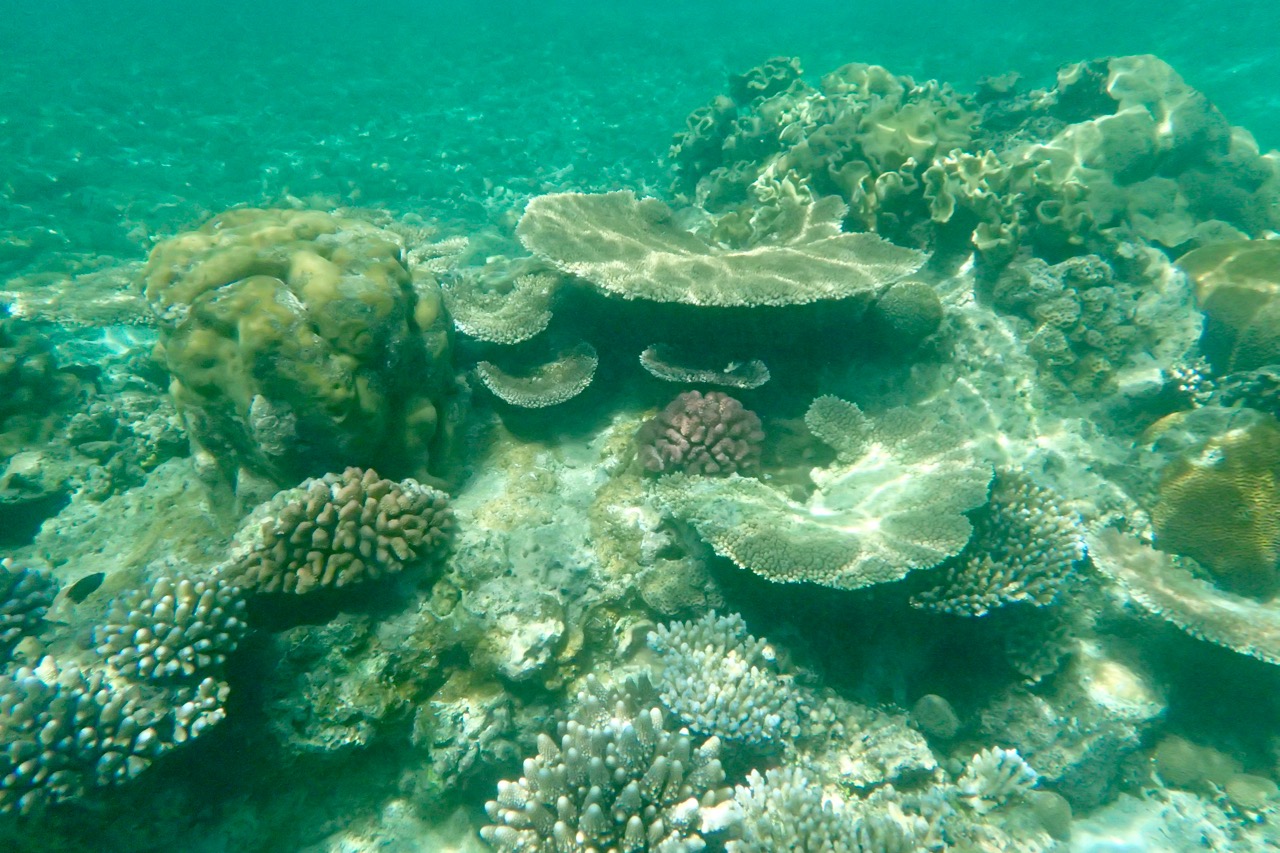 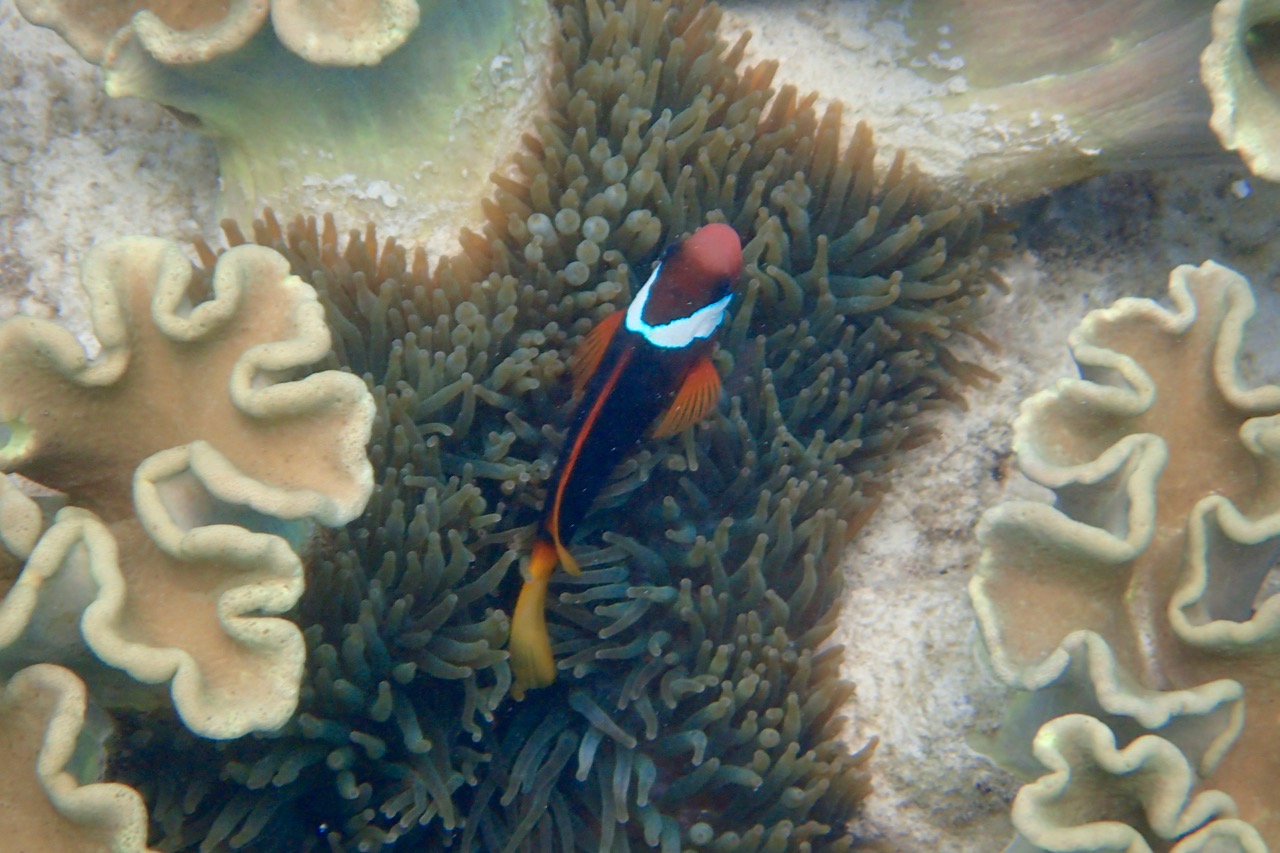