I got an invitation today from a friend to attend her baby shower.  Yes… another one of those.  This friend had tried for three years to conceive and eventually managed to get pregnant without any medical intervention other than some acupuncture (which probably did more for her mental state than her physical state, but I digress) so she’s one of the lucky ones in my book.  But seeing she is someone who struggled for quite some time with the whole conception thing, you might expect that she would have a teeny weeny bit of understanding how those of us who have turned into the epitome of an IVF Cautionary Tale, would feel about attending the baby showers of well… the pregnant people.

I don’t want to go to this thing!  Are you nuts?!  To sit around and watch the cooing and the oohs and ahhs over cute little baby stuff that people will bring.  It sounds like a special fucking torture to me… and I can’t perceive a reason why I SHOULD willingly put myself through that.  Especially at the moment when my own circumstances feel so precarious.  If I go, I get to spend an afternoon gritting my teeth and smiling appropriately and trying not to say things that are negative or depressing or just plain sad.  If I go, I get to spend the afternoon trying not to burst into tears inappropriately or running off to the bathroom to hide when I feel myself getting upset.

But if I don’t go… then I’m an awful friend, perhaps even just an awful person all round. 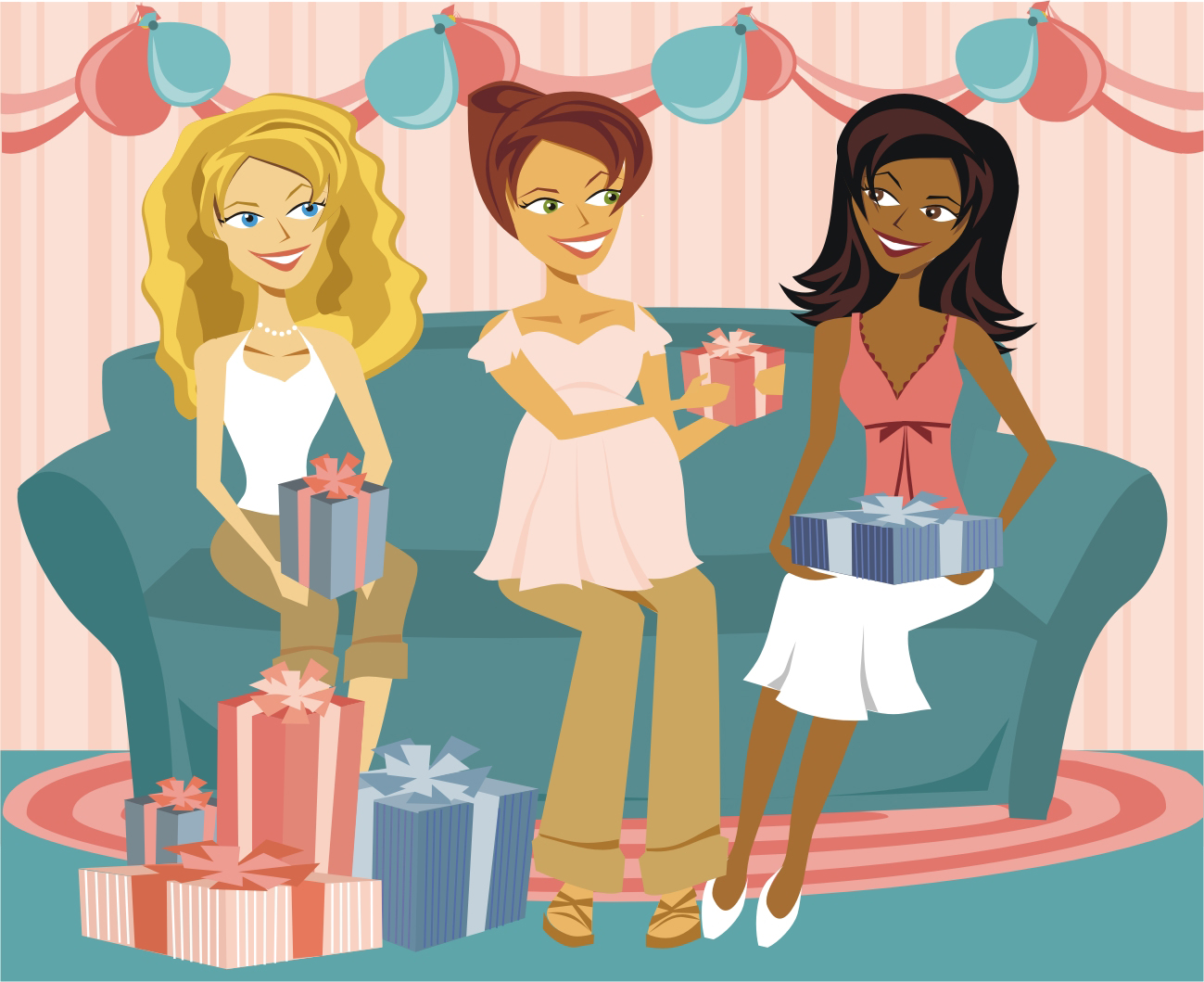 Reddit is a particularly special quagmire of geeks gone wild, so I am copying this in here so I can find it later.  You gotta wonder just how indispensable someone has to be, before they can get away with this sort of shit in the workplace… Seriously.
From /u/Mr_U_N_Owen:

In the fourteen years or so as a UNIX sysadmin:

1. Running your personal side business on production equipment or desktop workstations.

3. Wearing an animal skin to work as a spirit guide and assistance animal.

5. Replying to mail lists with the name field set to “Spanky the Monkey God”.

6. Keeping a bat with the words “Clue Bat” by the desk.

7. Putting a glass case with the phrase “Break in the event of stupid” enclosing a 9 foot bullwhip tagged with “Everything is better with Clue Whip” is not allowed.

8. Christening the latest newest high end piece of equipment received by having sex on it.

9. Keeping a filing cabinet solely to kick the snot out of it because sales or management did something resulting in stupid policy changes. Exposed metal edges became a safety hazard O_o.

10. Keeping firearms and ammo in the office for mid-day meetings at the shooting range.

11. Using QoS or other packet filtering to mess with competing player’s ping times on customer networks.

13. Shoulder surfing and blurting out destructive changes to things people are typing.

14. Proving that the Exchange admin did not properly filter a virus spread by email attachment by rewriting virus to email “Free Pizza in the Break Room!1!!” to all the developers. <–over-ridden by CTO, Exchange admin had to pay for pizza.

17. Failing to cease “certain personal night time activitities” when answering a call from the NOC at 3am.

18. Commenting to customers about the same behavior from them.

19. Telling customers that “underwear gnomes are stealing the packets” when they refuse to believe a rational explanation, isn’t acceptable.

20. Playing “Indiana Jones” on the data center floor with the Clue Whip causing a production outage.

21. Attempting to hire an African pygmy goat as a way of criticizing management on how low wages limit the hirable talent pool.

Totally wants to make you work in IT… 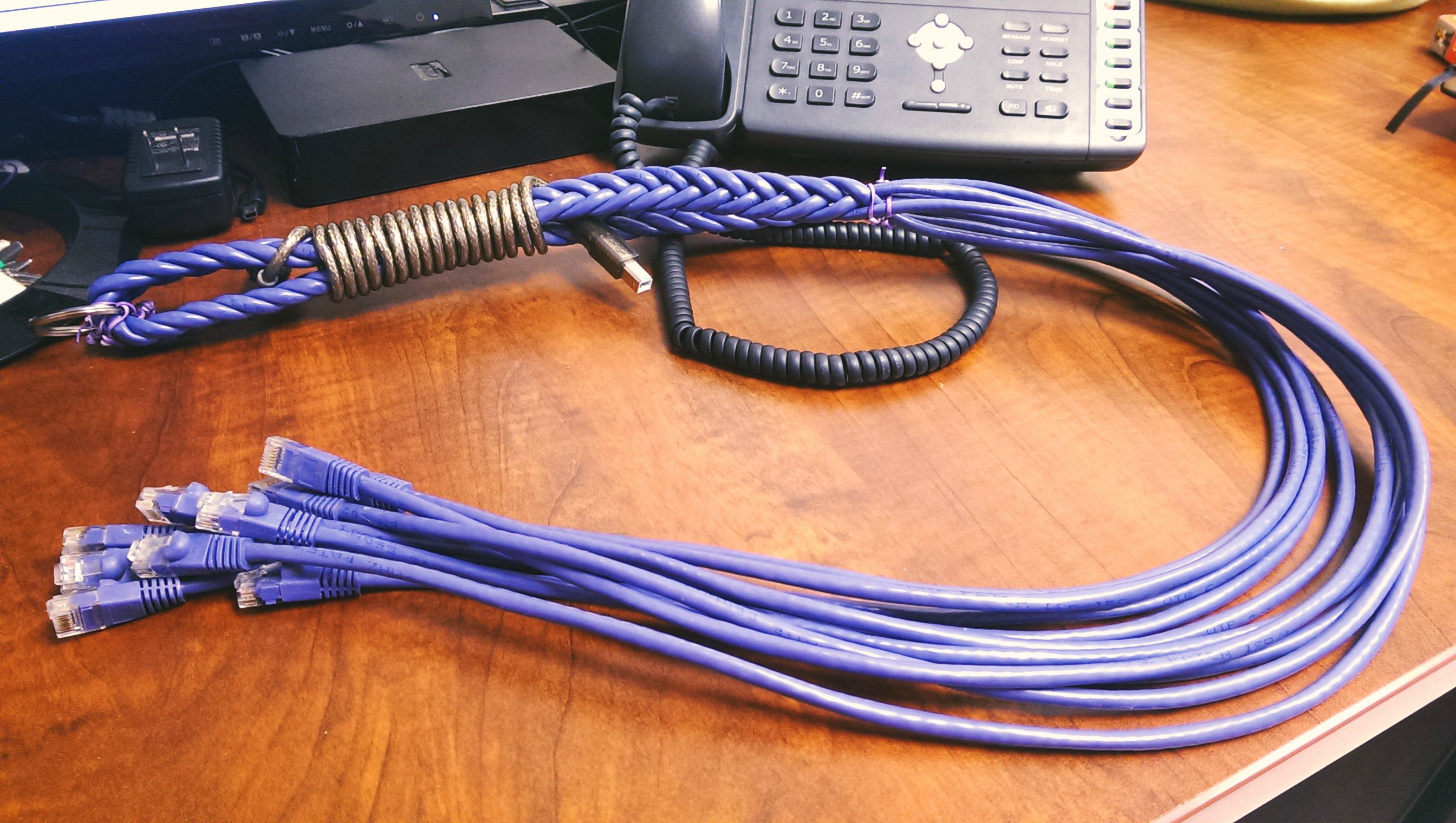 So we had a group counselling session today with Nicole, the TrickCyclist and our surrogate angel who is turning out to be someone who is so excessively generous and genuine that I can see us being life long friends… it is rare that I find a female friend that I just ‘click’ with, but I have felt that she is just our kind of people, if that makes any sense.

We had pretty much the same chats with Nicole that we had had in our individual counselling sessions and covered off an extensive checklist of ‘stuff’ that they need to review.  Basically the psych’s job in this situation is to make sure we have discussed a lot of the hard stuff up front and that there are no ‘red flags’ that would indicate that we shouldn’t go ahead.  If anyone is interested these are the sorts of areas that they are required to discuss:

Areas covered with Intending parents:
Relationship stability
Family and social support
Financial and work considerations
Relationship with the surrogate (current and future)
Disclosure of arrangement to others (including work and family/friends)
Considerations around informing the child
Intentions regarding continuing treatment in the case of failed attempts
Impact of the arrangement on their son
Implications of an unsuccessful outcome(s) on all parties (including their son)
Possibility of a multiple birth
Possibility of complications that may affect either or both parties (including loss of job, relationship breakdown, severe illness, injury, or death of partner, or death of both).
Control and complications during pregnancy (including activities/conduct/health of surrogate, prenatal screening, foetal abnormality, termination of pregnancy)
Possibility of a breakdown in the surrogacy agreement (particularly dealing with a disabled or seriously ill child issues around birth complications and decision making.

Areas covered with the Surrogate:
Motivation for entering into a surrogacy arrangement.
Current/ future relationship situation.
Family and social support.
Financial and work considerations.
Relationship with the intending parents (current and future).
Disclosure of arrangement to others (including work, family/friends).
Impact of the arrangement on her own son.
Future relationship with any potential child and the intending parents.
Intentions regarding continuing treatment in the case of failed attempts.
Implications of an unsuccessful outcome(s) on all parties.
Possibility of multiple birth.
Possibility of complications that may affect either or both parties including control and complications during pregnancy.
Possibility of a breakdown in the surrogacy agreement (particularly refusal of Intending Parents to accept the child).
Issues around birth complications and decision making (particularly the relinquishment of the child by the surrogate).
Possibility of loss of job, relationship breakdown, severe illness, injury, or death, including death of both intending parents).
Activities/conduct/health issues, prenatal screening, foetal abnormality, potential termination of pregnancy.

All good hard stuff to discuss I can assure you.  And while everyone is entering into this with the purest of intentions… the whole situation scares the living hell out of me.

I just can’t bring myself to be happy about this, let alone be actually excited at the prospect.  I have spent so many years managing my expectations regarding infertility, pregnancy, babies, children and all these things, that the idea of it actually working is such an anathema to me that I just can’t see it happening for us – and yet here I am going through all the processes anyway.  The psych says ‘You should allow yourself to be excited about it, there is plenty of time for disappointment down the track if it comes to that’… but it’s just not that easy to let go of a mentality that you’ve been carrying around for a decade.

I love Black Books (probably due an inappropriate self identification with Bernard and his misanthropic ways), such a shame they only had a couple of seasons.  I have copied these ‘motivational posters’ here, for ease of finding them down the track, and with a view to perhaps making a few more with some of my own favourite quotes. 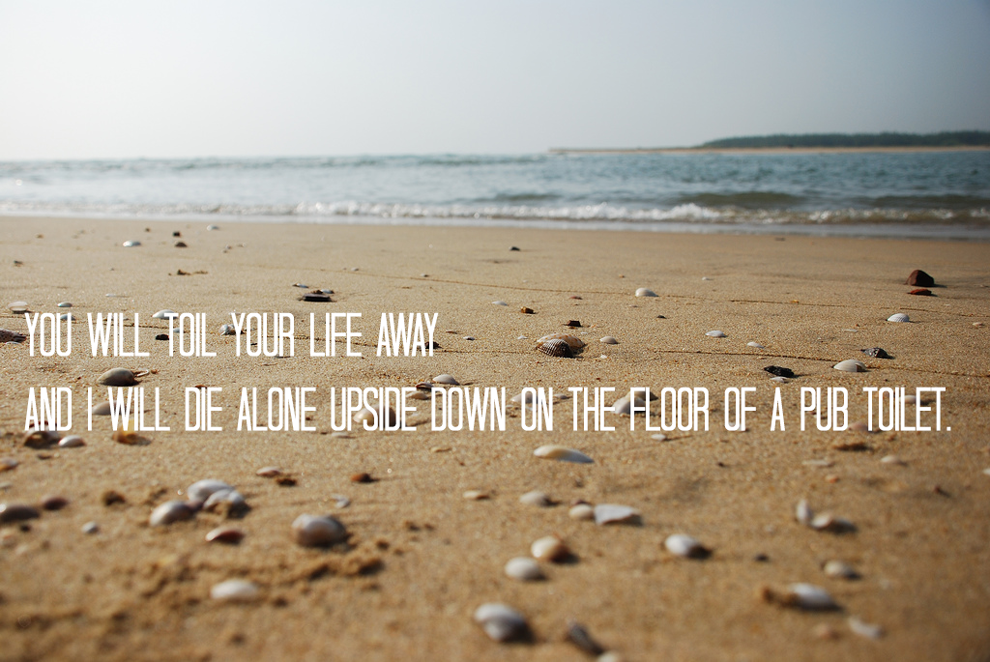 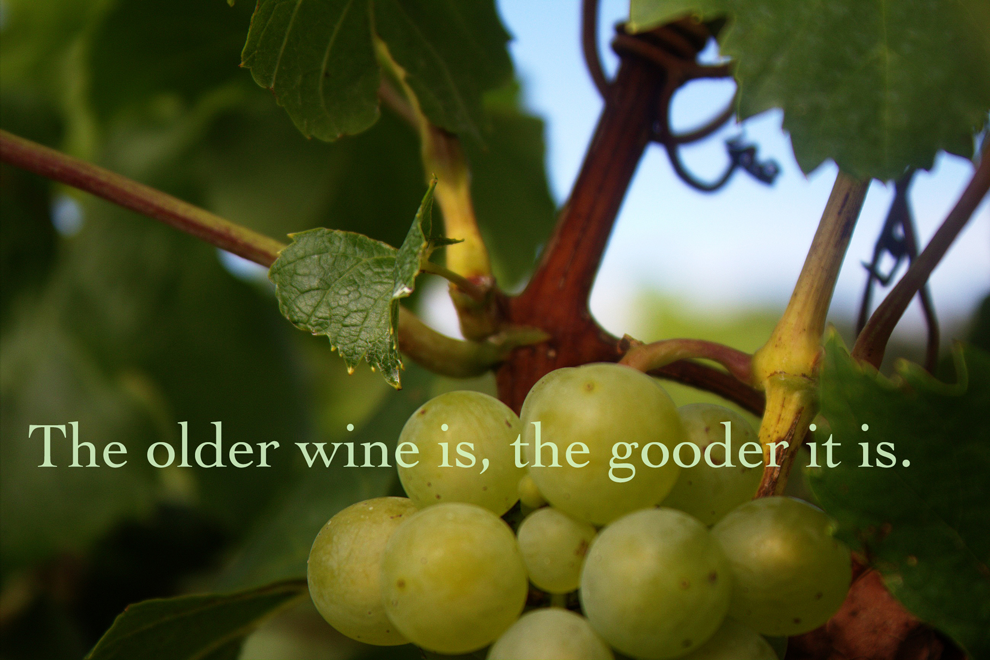 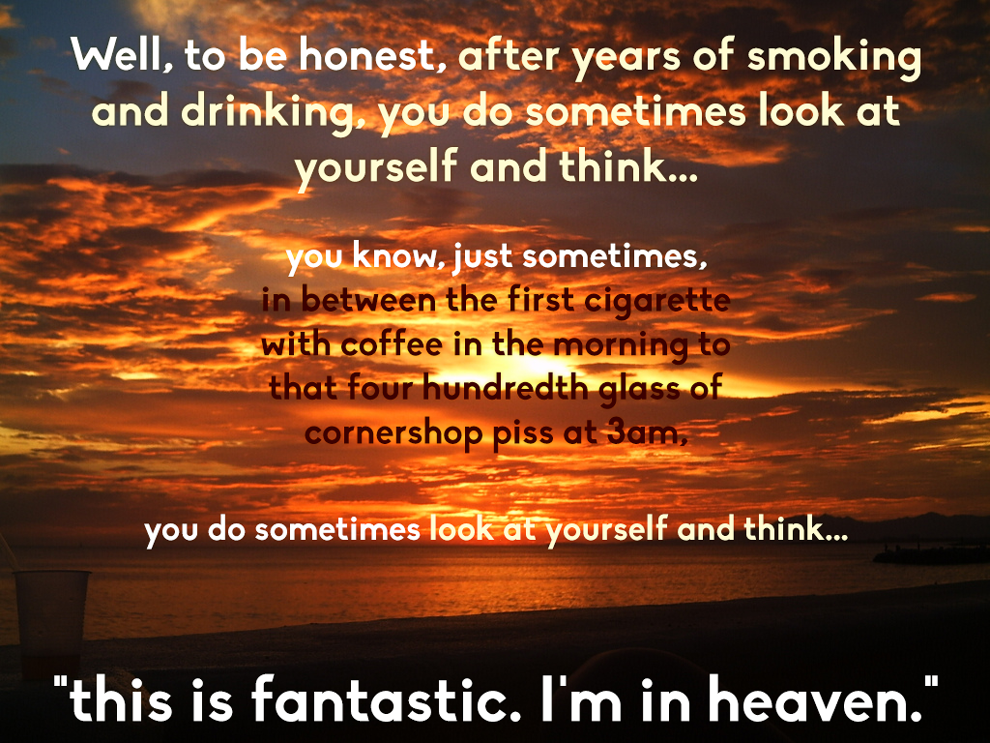 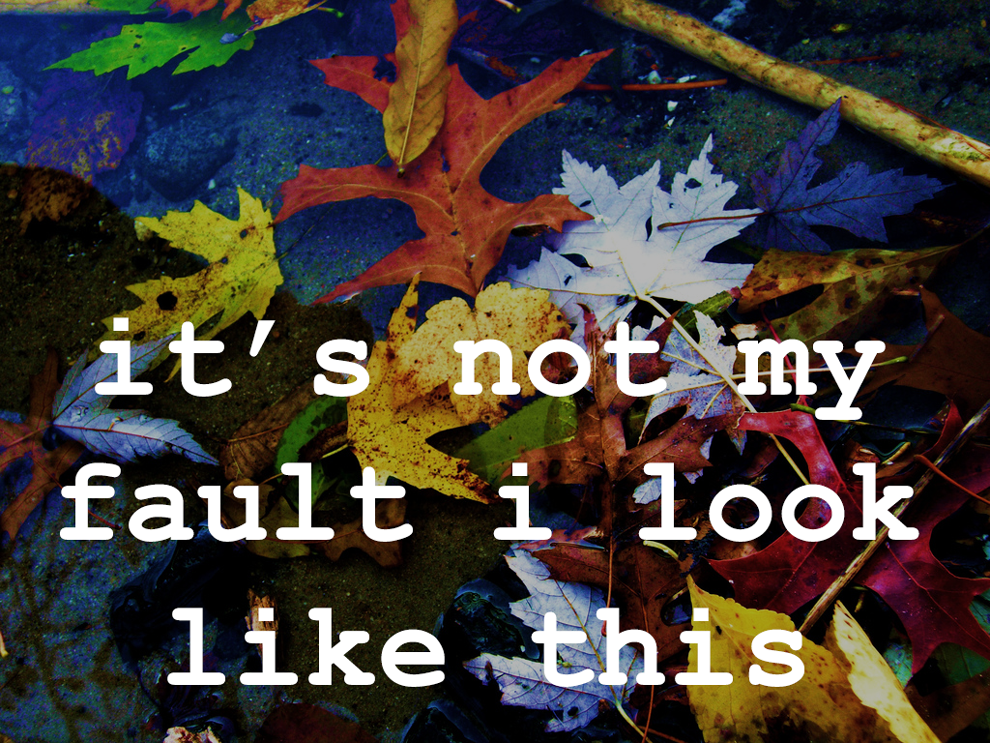 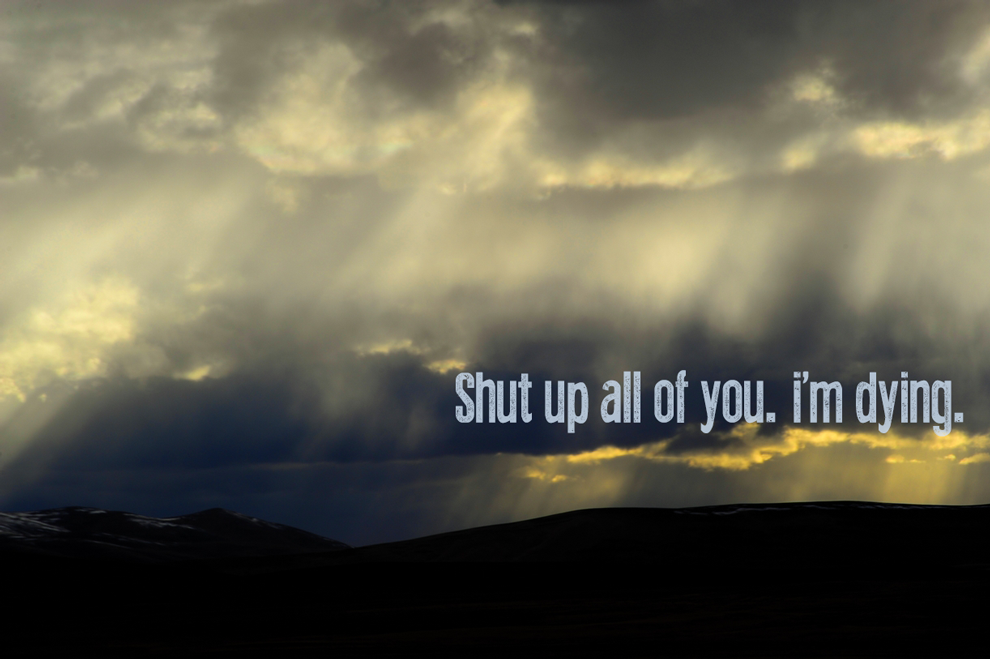 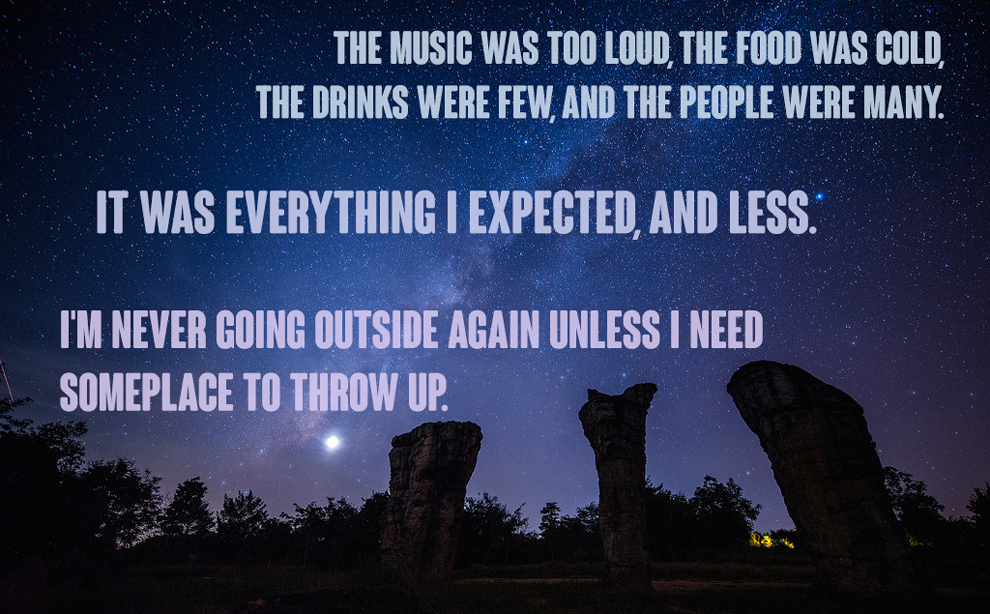 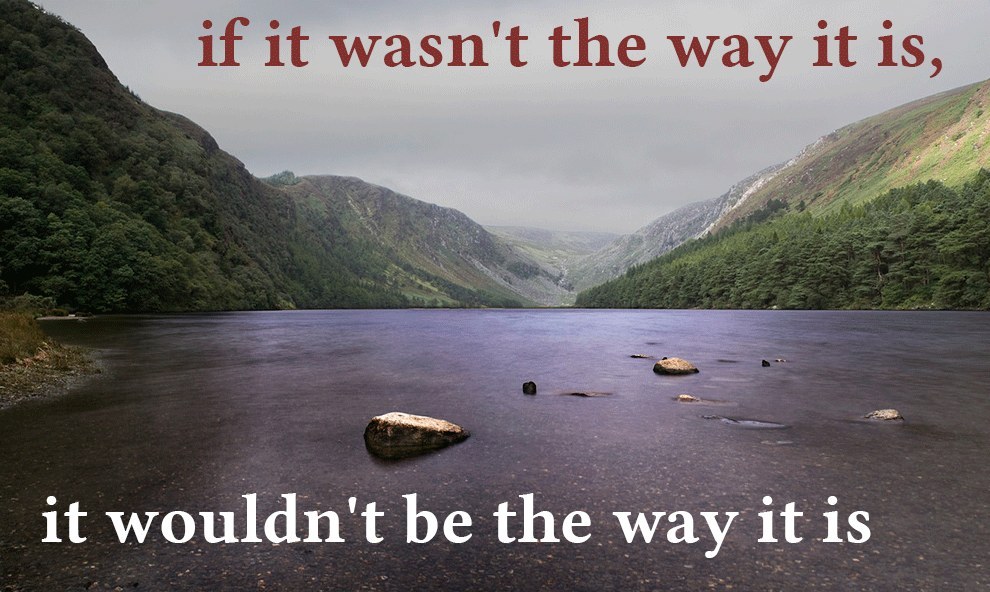 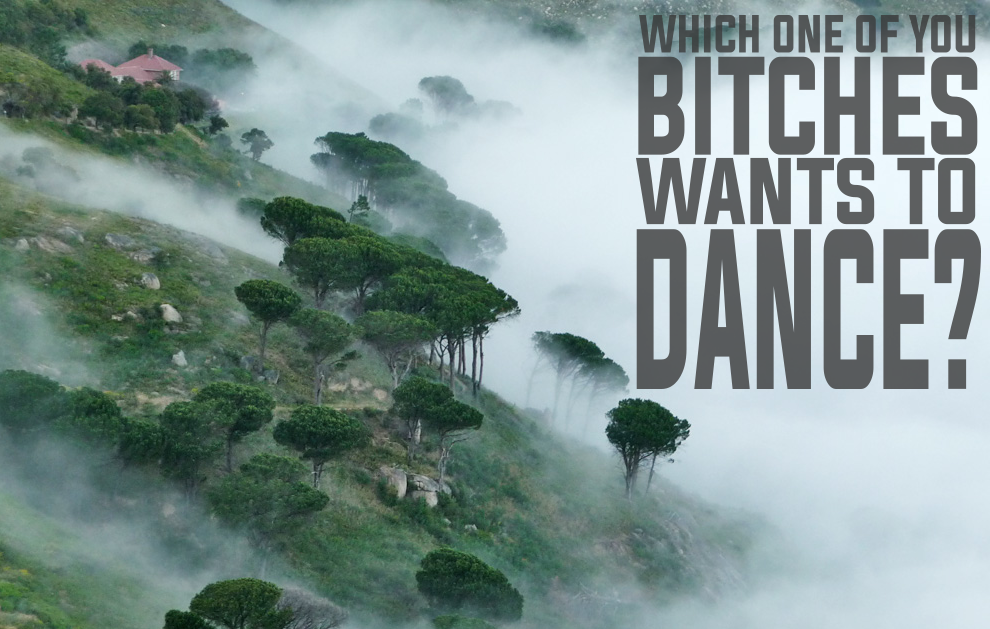 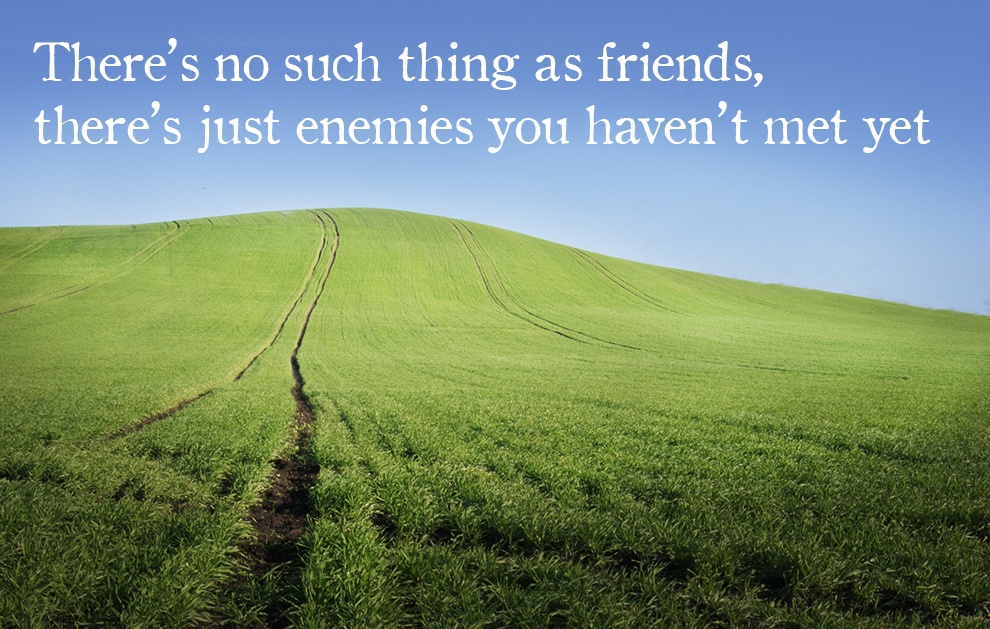 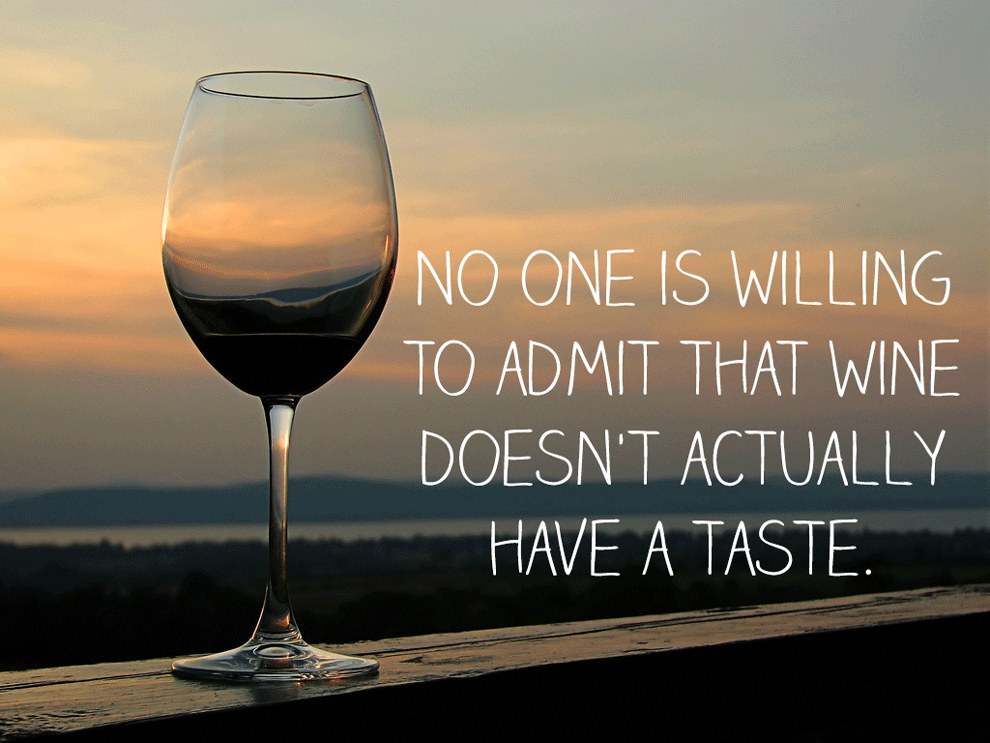 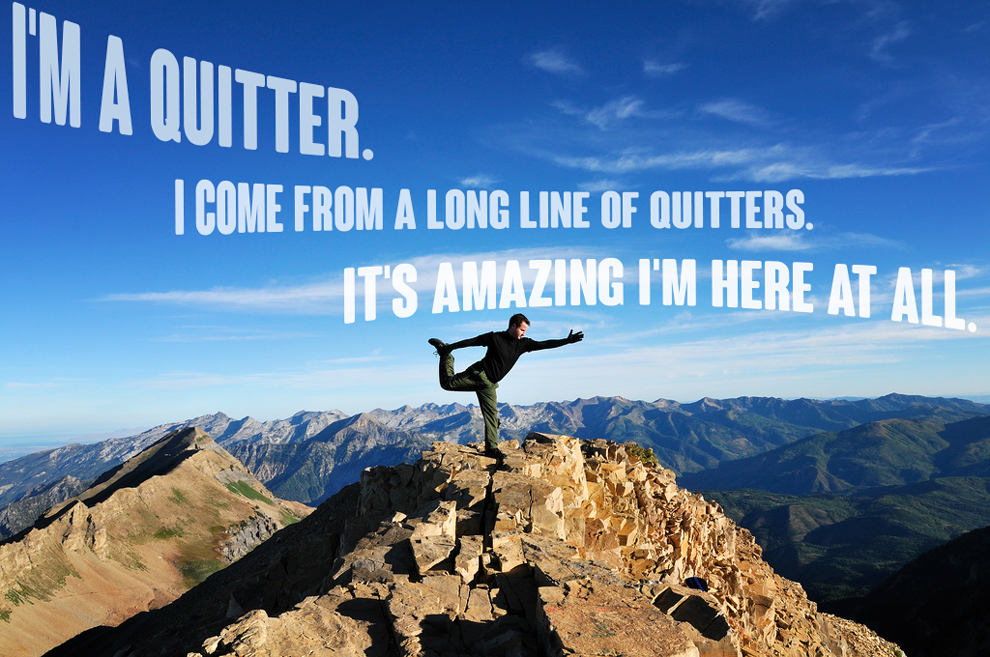 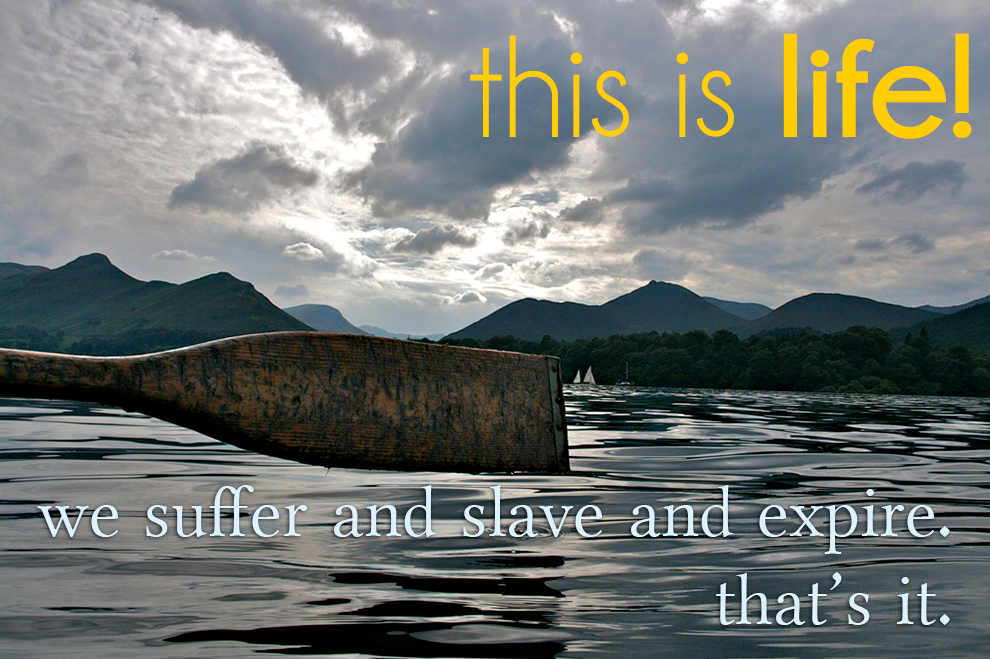 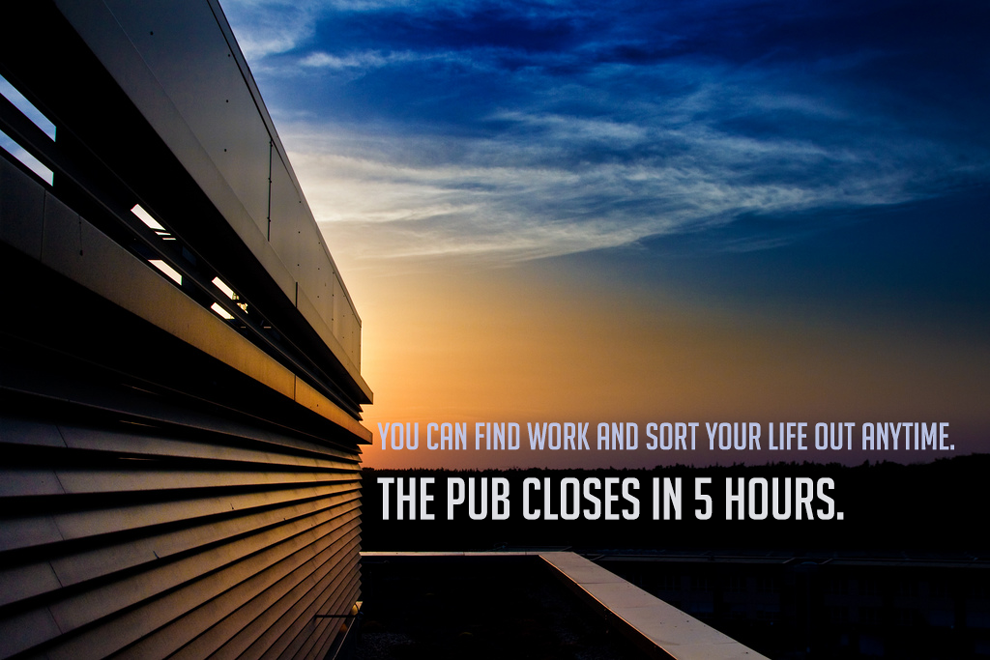 And once again we see that life is stranger than fiction… I mean seriously, who would even make this shit up!  Cocaine and cannabis haul hidden in Vatican car belonging to 91 year old Vatican librarian, seized by French police!  Booyah!    😀

We’ve hit new highs in the absurdity stakes and I loves it! 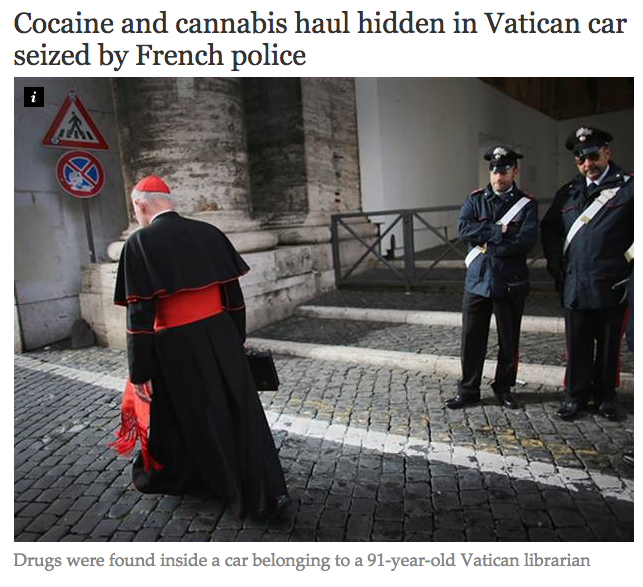