Since there was a flurry of activity leading up to GNW when it was all over there was a day or two of ‘hmmm … what do I do now?’ and for some strange reason that resulted in a rifling through my embroidery box to see what sort of UFOs (UnFinished Objects) I might have laying about as this would be the perfect time to finally get in and finish something.

At which point I picked up this – I started this little cross stitch in 1998 about a year or so after I met Mr K.  I remember working on it when I was in the RBH in about Jan 1999 and I remember being well into it at that stage.  It has been picked up off and on over the last decade (yes… decade! :S) or so and every time I return to it, I ask myself the same question – WHAT ON EARTH WAS I THINKING!?!?!?!!

It is worked from a commercial pattern (based on or inspired by one of the Lady and the Unicorn tapestries at the Musee de Moyen Age in Cluny Paris) on 32 count linen with a single thread of cotton floss over a single thread on the linen… now if you don’t know anything about embroidery then you won’t understand how ridiculously tiny and fine that is.  If you do know anything about embroidery… you’ll be laughing your arse off about now thinking Borys is a mad woman and deserves every little bit of hell that it’s giving her.  😐 And I think it’s literally making me go blind!  I am experiencing very tangible visual perception anomalies if I come to the PC and try and look at my monitors as I have just done now.  Stuff appears to be swimming in front of my vision… which I am sure isn’t good.  I’ve only got the background to finish and some fiddly finishing bits but now I’m in full ‘Grrr…must finish fucking project’ mode so I can’t put the damn thing down until it’s done. At which point I guess I’ll be saying – well that was a long drawn out and exhaustive exercise in futility… what am I going to do with it now?

1. Your Middle Name:
2. Age:
3. Single or Taken:
4. Favorite Movie:
5. Favorite Song or Album:
6. Favorite Band/Artist:
7. Dirty or Clean:
8. Tattoos and/or Piercings:
9. Do we know each other outside of LJ?
10. What’s your philosophy on life?
11. Is the bottle half-full or half-empty?
12. Would you keep a secret from me if you thought it was in my best interest?
13. What is your favorite memory of us?
14. What is your favorite guilty pleasure?
15. Tell me one odd/interesting fact about you:
16. You can have three wishes (for yourself, so forget all the “world peace, etc.” malarkey) – what are they:
17. Can we get together and make a cake?
18. Which country is your spiritual home?
19. What is your big weakness?
20. Do you think I’m a good person?
21. What was your best/favorite subject at school:
22. Describe your accent:
23. If you could change anything about me, would you?
24. What do you wear to sleep?
25. Trousers or skirts?
26. Cigarettes or alcohol?
27. If I only had one day to live, what would we do together?
28. Will you repost this so I can fill it out for you?

1. Your Middle Name:   Michelle…my belle.
2. Age:  Had my 30th BDay party last year
3. Single or Taken:  Yes and yes.
4. Favorite Movie:  Grosse Point Blank
5. Favorite Song or Album:  Two Shoes – Cat Empire
6. Favorite Band/Artist:  Rammstein, Cat Empire,
7. Dirty or Clean: Clean
8. Tattoos and/or Piercings: 3 and 3
9. Do we know each other outside of LJ?  Why yes
10. What’s your philosophy on life?  “Say what you mean and mean what you say.”
11. Is the bottle half-full or half-empty?  Don’t care obviously needs a top up.
12. Would you keep a secret from me if you thought it was in my best interest?  Nope
13. What is your favorite memory of us?  Thnking… thinking…
14. What is your favorite guilty pleasure?   Cheese – Jarlsberg, Brie, Stilton etc
15. Tell me one odd/interesting fact about you:  I’ve got very small feet and mostly wear kids shoes.
16. You can have three wishes (for yourself, so forget all the “world peace, etc.” malarkey) – what are they?
16a:  Pain free back
16b:  A decent metabolism/stable hormones
16c:  Another child
17. Can we get together and make a cake?  Sure, so long as it’s not chocolate.
18. Which country is your spiritual home?  Haven’t found it yet.
19. What is your big weakness?  Smart men
20. Do you think I’m a good person?  Yes I dont cultivate friendships with arseholes.
21. What was your best/favorite subject at school:  Best English… Favourite French.
22. Describe your accent:  Slightly English and decidedly not Aussie ocker.
23. If you could change anything about me, would you?  I don’t think people really change.
24. What do you wear to sleep?  Perfume and a smile
25. Trousers or skirts?   We all know I wears the pants!
26. Cigarettes or alcohol?  Alca-ma-hole every time.
27. If I only had one day to live, what would we do together?  Pick up some hookers and blow.
28. Will you repost this so I can fill it out for you?  Voila!

Picked up this meme from

. The list has some great books on it but where is Stendhal, Defoe, Disraeli, Pushkin, Gaskell, Lawrence, Swift, Trollope, Wilde???  And barely one Dostoyevsky?  Mumblefuck mumblefuck… I think we could make a better list (and yes I am aware that I sound like a right prat :S)

1) Look at the list and bold those you have read.
2) Italicise those you intend to read.
3) Underline the books you LOVE.
4) Reprint this list in your own LJ so we can try and track down these people who’ve read 6 and force books upon them
5) Put a star next to those you’ve only partially read.

Small Child had his 7th Birthday today.  I know parents the world over are fond of saying how quickly they grow up – but it’s true.  Feels like barely a couple of months ago that we bought him home from the hospital.  He was tiny 5lb7oz with a head hardly the size of a largish apple that fit in the palm of my (little though they are) hands and the little bugger wouldn’t breastfeed to boot… so, well… to be totally honest I was scared shitless.  I know we all expect the sickly sweet Johnston and Johnston version of instant mother-baby bonding bullshit and we’re not supposed to admit it if we don’t immediately love our babies… but my experience of early motherhood certainly didn’t resemble the brochure.

He went from being in a Special Care Unit for premature babies and being watched over 24/7 by well qualified midwife/nurse types to being handed over to me to take home.  Honestly?!?  What the fuck were they thinking?  I was in hospital for 9 days after a c-section delivery and most of that time Angel spent in the Prem Unit until the last two nights where they roomed him in with me and I was supposed to demonstrate that he was feeding okay and would be fine to go home.

I can’t remember why I was so frightened that they might send me home without him, but it was the last thing I wanted so I did what every terribly neurotic and hormonal post-natal woman with extremely bad judgment does in a situation like that … I lied my arse off.  I told them that he’d fed well and that he slept for about 2-4hours at a time.  The Truth™ was that he definitely wasn’t feeding properly and he was sleeping for barely 20-30mins at a time before waking up hungry again…. which means that I was waking up every 20-30mins and attempting to feed him each time.

At the end of the two sleepless nights where the Small Infant flatly refused to sleep the pediatrician came to see me to assess how things were going and decide whether or not we could all go home together.  So now we have a SLEEP DEPRIVED terribly neurotic, hormonal post-natal woman with extremely bad judgment lying her arse off to the good doctor so they’ll let her go home – all I remember of that particular interview was that I was trying hard to smile and make it seem like everything was okay while simultaneously fighting a concrete certainty that everyone around me was talking to me under water!  I struggled and I mean REALLY struggled to keep my mind on what the doctor was saying and I was convinced they would see right through me and would decide to keep the Small Infant in hospital.

The only other time I have ever felt even remotely that sleep deprived was on my way to London back in ’95 when our 28hr long haul flight turned into a 46hr long haul nightmare due to an overweight business man on the flight having a heart attack over Tehran which necessitated in our being unceremoniously re-routed to Bahrain for several hours before being eventually dumped in Heathrow feeling like rung out dishrags.  Ah.. but I digress.

Post-natally hormonal, more than usually paranoid, extremely stressed, totally inexperienced, positively exhausted new Mom who felt like she’d just come straight from a week in a ‘well lit room in Gitmo’ and thought people were talking to her underwater got handed one tiny underweight, 4 weeks premature Small Infant with no suck reflex, that refused to feed, slept only in 30min blocks and would go into infant shutdown on not infrequent occasions with an admonishment from the pediatrician that if same Small Infant didn’t put on weight over the next week he would be readmitted – a recipe for success if you ever heard one!    Ah… Good times people… good times.! 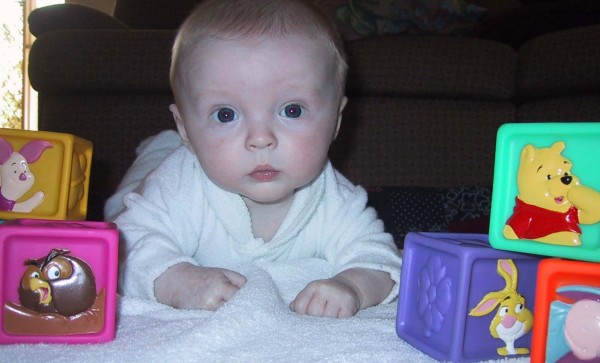 It must have been night on 4 months before I started to enjoying having him around and I like to think I’ve gotten better at all this since then.  🙂

My house which is a the bottom of my street backs onto the Gateway Motorway (one of the main bypass roads for the city).  As anyone who has come to visit us here knows that the traffic noise is really rather loud and off putting outside.  Normally you can’t hear much of it inside the house as the roof is insulated well and we don’t have any widows on the west side of the house that faces the highway.  At the moment they’re expanding the road out there which means they’re also in the middle of putting up massive new noise barriers which will probably make it nice and quiet in the yard too.

As per usual I’m getting off the point :S  Every now and then you’ll hear a truck tyre blow and it sounds like a gun shot or something or you occasionally hear the squeal of brakes and brace yourself for the crash which more often than not never happens.  You can often hear idiot truckies on their jake brake cos they’re lazy fuckers.  Anyway yesterday afternoon we were hanging about in the lounge room when we heard a god almighty crash out the back… probably the worst sound I’ve ever heard from out the back.  Seeing that it was nearly time to go get the Small Child from school we decided to head off a little early so we’d have a few minutes to have a sticky beak from the overpass to see what had happened.

And were greeted by this – It was only about 150m from my house.  So it happened around 2.40pm which of course then meant the traffic was shot until well after the peak hour.  I drove past on our way back from dinner out last night and at 8.45pm they still hadn’t even started the vehicle recovery.  I can’t believe that both the truck driver and the driver of the little mashed 4WD walked away from this mess.