Went back to the rug shop yesterday in between the tour and the Tacky Turk Tourist Trap.
And decided to buy that rug I fell in love with.  It is a carpet Sumuk blend of techniques in a vibrant red colour which I want to put in my entry way at home… hope it goes nicely with the other colours in the room!  😐 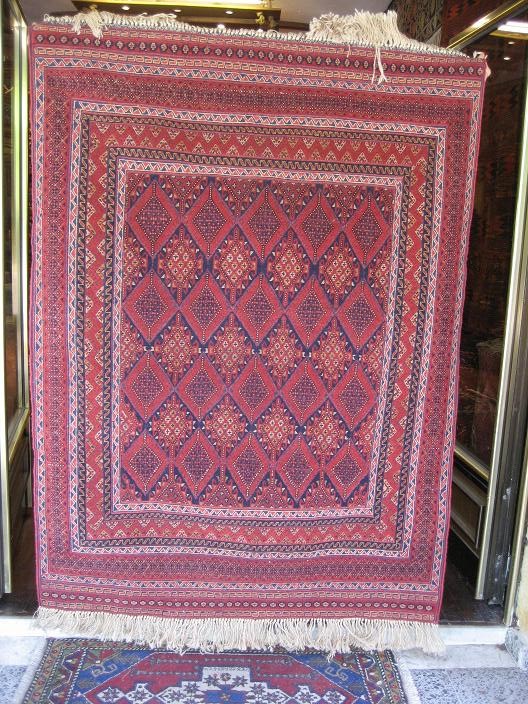 After I bought it I found out it came orginally from Balochistan which is where MD is living in Pakistan and where I am going right after this trip!  So maybe I could have found something just like it from Smahel after all!  Oh well… I loved it, and thought I would probably regret it if i left it behind!  🙂 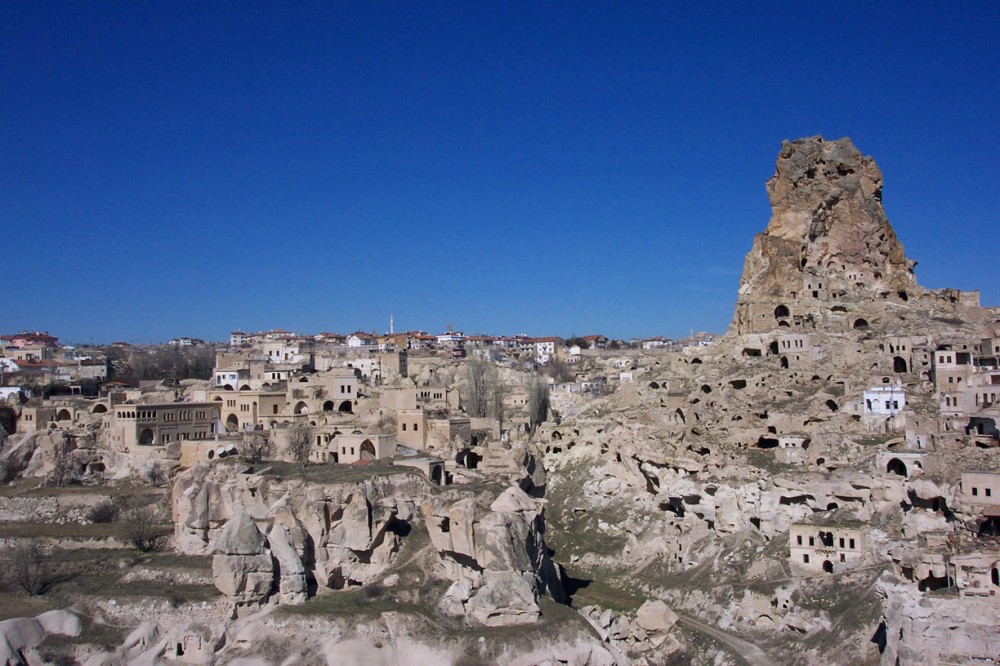 Most of our group hıked up here from Göreme but myself and one other happy camper – Ester (Ester ıs from NewZealand and ıs currently sportıng some massıve hıckeys from last nıghts Tacky Turk World Tourıst Trap 🙂 – opted to travel up wıth the luggage rather than break ourselves on the 12 km hıke that was advertısed ın the brochure as a gentle three hour walk  :S  Unfotunately my back ısnt holdıng up too good on these strange beds etc.  So we spent a quıet afternoon playıng wıth the kıds and hangıng out ın the cave… as you do!  🙂

We had a massive day today – absolutely massive.  I’ve desperately wanted to come to Cappadocia since I was in Turkey 12 years ago, and have finally gotten to see it!

We got up at sparrow’s fart to go hot air ballooning over Cappadocia.   We set off at about 4.45am, went to the launch site, a ridge on the eastern side of Goreme, and took off just as the sun was rising.  Our pilot, Mustafa… or Mustafasan as the rest of our (largely Japanese) co-ballooners were calling him, seemed particularly good at what he does.  He took us straight off the ridge and down into one of the valleys to get in close to the caves and the crazy volcanic landscape.  It really is a strange and almost surreal environment.  The people here have been cave dwellers for thousands of years, and as the valley has eroded, their caves have moved further and further down the valley, which is why there are homes way up the side of very steep mountainsides.  The result is these mountains dotted with holes like swiss cheese that people used to live in. 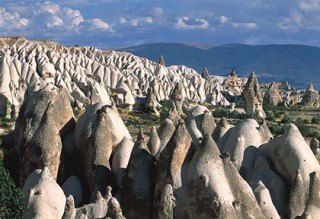 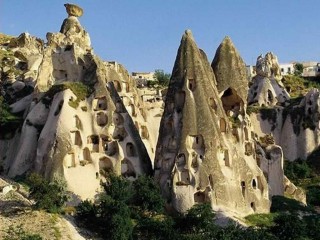 We floated around for about an hour, and the landscape was amazing, it was worth every cent of the very expensive 289YTL that it cost to go.  I took lots and lots of photos (which i have already had backed up to disc 😉 and when we landed, Mustafa did a great job of putting us down lightly onto the back of a trailer…. so they could drive the basket straight back to base!  Got to sit around admiring the view and drinking champagne mixed with sour cherry juice, which was surprisingly nice and went down really easy!   Several champagnes later (and all before breakfast) we trundled back to the pension to get on with the day.

After a quick breakfast, we went to the Goreme Open Air Museum, which was amazing…. and might have been even more amazing if we didn’t have to navigate around truckloads of Japanese tourists and their extremely pushy guides!  😐  The museum is a series of caves that has a number of churches built into them with these amazing early period frescos painted in the ceilings.  There were also a monastery and a nunnery sections built into the cliff sides. 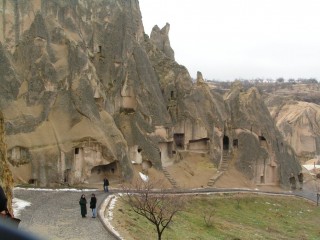 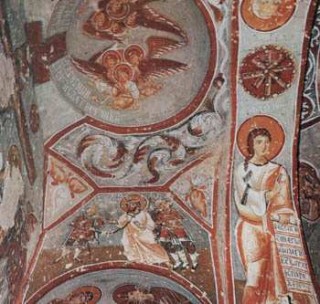 After the Open Air Museum we went for lunch…. kebaps again!  And after lunch we had a bus tour organised to try and get a better look at the Cappadocia region…. which covers about half a dozen townships.   First stop was Derinkuyu (which means Deep Well).  Derinkuyu is an underground city first started about 2000BC by the Hitites who used the underground caves to avoid their enemies.  The city goes down in 8 levels and ends up about 50 odd meters underground.  They had areas caved out for stables, sleeping quarters, kitchens, wine cellar, church and school … everything.  The whole thing is like a maze underground, and if it were not for the benefit of the signs, I think it would be very easy to get lost down there.  They used to drag their livestock and valuables underground when ever there was a threat of invasion, and then roll these massive millstones across the tunnels to block the entrance ways.  Most of the passageways and stairways are so small that even I, at barely 5’0″ had to crouch over almost doubled to go through them.   Yale – you’d never make it down here… the steps are so tiny too, I kept thinking of you having to crab walk your way down them!  🙂

I was really rather hoping both Turkey and Pakistan would stay out of trouble for a while while I was away…. but that was obviously too much to hope for/  there was a bombing in Ankara on 28th May.  Two bombings in Quetta over the last week – one at the train station and one at an office block where someone drove a truck full of explosives into the building and turned it into a car park!!!  Things are not looking good on the travel advisory service since these latest rounds of random violence.  News today on Turkey and on Pakistan as follows:

We left Istanbul last night and took the overnight train to Ankara.  The first thing I noticed about this trip is that we seem to have a REAL tour guide!  Last time I did an organised tour, and admittedly that was a good decade ago, our tour guide was a bit hit and miss.  She was an absolute darling and we all loved her dearly, but her general knowledge on where she was leading us was often full of glaring gaps  🙂  For example on an orientation drive through Paris, she gesticulated in the general direction of the Louvre and told us “That’s the Loov museum, where they have lots of famous stuff, like the Mona Lisa and that statue of the lady with no arms”  which you can imagine had us all in giggles.  But the tour guide who is showing us around Turkey is the exact opposite –

Annoying Pack:  Do you happen to know what that building is?

Tour Guide par Excellence:  Yes, that is the Gare de Haydarpasa which is Istanbuls main train station.  It was built in 1909 and underwent extensive restoration in the early 1980s… etc etc etc.

So yay for us having some one to show us around who has some local history and culture happily under their belt.  In addition to that, she seems to have a great grip of the Turkish language which is proving really helpful too.

Anyway back to the train, we got on about 10pm, and DrNick and I were (not surprisingly) assigned a sleeper carriage with the only other couple on the tour, Dandenong Dan and his wife, Gina.  Dandenong Dan likes to collect LED torches and seems to have a problem remember any sort of proper noun, perhaps due to a previously sustained head injury.  His wife Gina likes to highlight things in her guidebook, and dislikes unexpected bird strikes when riding her motorcycle.  :S  Both Dan and Gina like a smoke and a drink or two or three or four… which naturally meant they were in an out the door all night going to the truvalet (ie: toilet – the first Turkish word I learned!)  As travelling companions we could not have been less suited, but there you have it….. they remind me of Ipsnatch and Steady, which is a whole other story I dont have time for right now.

So after trying our luck with the dining car and eventually being driven out of there by the cigarettes, we turned in fairly early around 11pm.  Lets just say it was a long…. long…. long…. night  🙁  I didn’t sleep too well at all unfortunately, and can only imagine how worse off we would have been if we didn’t have the sleeper compartment.   Everytime we went through a tunnel this morning, I kept being reminded of the sleazy Italian man from Eurotip…. and half expected to see him appear in the compartment when we came back into the light!!!   Anyway we get to Ankara, have the briefest glimpse of solid ground and then hit a minibus for the trip to Goreme which is the middle of the Cappadocia region.  This whole area is stunning!!  But more about that tomorrow after we go hot air ballooning at dawn and get a really good look at the place.

This afternoon, we’ve done some pottering around Goreme, and went to a place called Tribal Collections, which is run by a lovely kiwi woman named Ruth who spent about 2 and a half hours teaching us all about Turkish carpets.  It was well worth while, and we learnt heaps.  I’ve fallen in love with two carpets both of which originate in Afghanistan,(which Ruth has kindly offered to put aside for me on hold so I can make up my mind if loving turns to buying!!!  :S) but not sure whether or not to buy as I am promised by MD that his carpet dealing friend Smahel will ‘look after me’ when I hit Quetta….. hmmm decisions decisions.  I guess i could always get one from each place!!!!   😀  Have two days to make up my mind!

Tonight, we’re trying something called Testi Kebap for dinner, which is apparently some sort of lamb or chicken casesrole in a clay pot that you have to break to get to the food…. local delicacy apparently… but sounds more like local gimmick! PS….something about trains makes you want to have sex….. dont know why?  Maybe something to do with an old Risky Business fantasty or something!!!  😀  Those of you who remember the 80s know what I’m talking about !!!

Some cool and uncool things about Istanbul  🙂

.    There are no bins in this city anywhere… and yet the streets are mostly quite clean!
.    I can’t bring myself to have a shower of more than 3-4 mins even though there’s no drought here!
.    Can’t stand haggling in the bazaar… am glad at home the price is just the goddamn price.
.    It’s strange to see women covering their heads in religious piety yet walking down the street hand in hand with their beaus.. wasn’t expecting that.
.    No one here seems to take Visa and no shopkeeper can ever break a YTL50 without theatrics.
.    Filletmignon with mushroom sauce does not translate and is actually some ghastly cheesey white sauce mushroomy thing on cardboard steak…..  :S
.    You can buy g-strings in the supermarket, yet 45% of Turkish men think it’s okay to beat your wife.
.    Stray cats here seem to travel in pairs – Toxo and his mate Plasmosis….
.    Those strange little tubs are not milk…. they’re watered down yoghurt!  Bleurk!!!  All yours Dr Nick.

I am sure there is more but the internets cost too much around here…. hopefully there will be a ready supply of internets around the countryside….
.