When will I ever learn that these long-haul flights just knock you around too much to expect to get anything useful done directly after one?  We arrived in London at 0700 on Friday morning and had been debating doing ‘something’ for the day.  But by the time we arrived, neither of us having had any real sleep to speak of en route, it was, ‘Oh dear God, please please please let them have a room ready for us super early because I’m not going to make it to nightfall’.  Plans to go see anything in the city were swiftly defenestrated and instead, all we achieved yesterday was running a few local errands and having a bit of a nap.

We did manage to catch up with Stephola for a wonderful Indian dinner though, at a place called Sipson Tandoori not far from Heathrow, rather fancy and lovely food.  We stayed at the Premier Inn Heathrow Terminal 4 – and I have to say, I was quite impressed with the place.  Just an airport hotel but thoroughly clean, modern, well appointed and totally soundproofed, right near the airport.  So we didn’t have to schlepp our stuff too far when we arrived or when we left the following morning… considering it was roughly the price of what we pay for a roadside country motel on the way to or from Festival, we were pleasantly surprised at how nice it was.

Next morning, I was planning on sleeping in a bit… but alas, my drugs and stupid body clock had other ideas and I was awake at 0430.  We had a quiet morning, breakfast at the hotel and squared everything away before heading back to the airport to check in with Icelandair for our flight to Reykjavik. As per usual, everything at the airport seemed to take longer than expected and next thing you know we’ve done a 3km dash to find our gate on time. 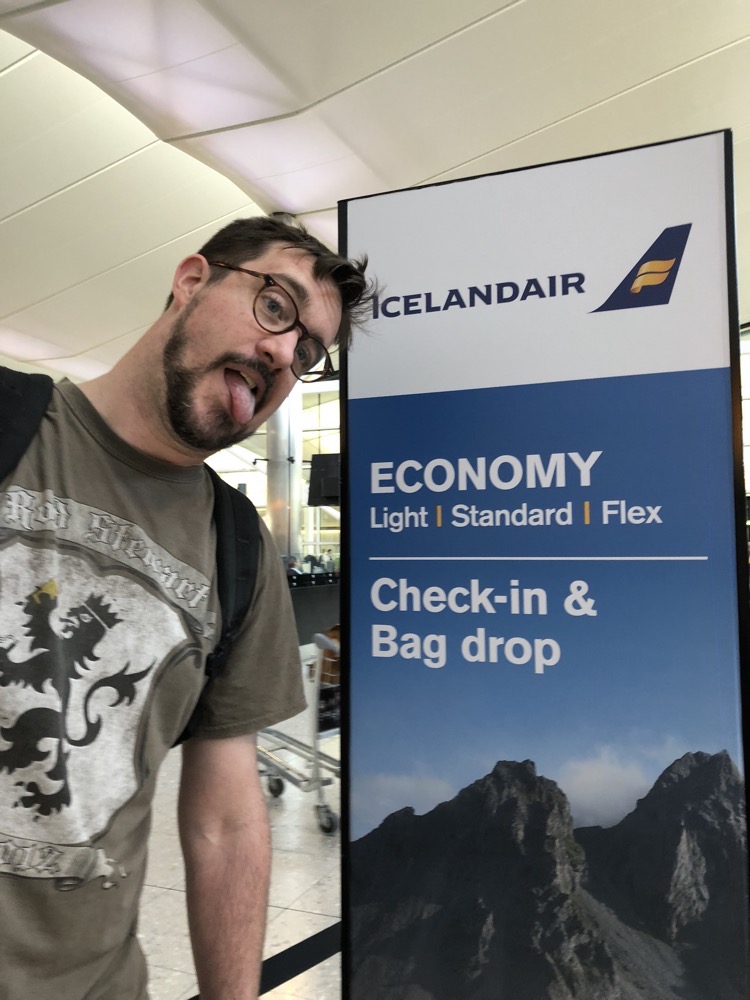 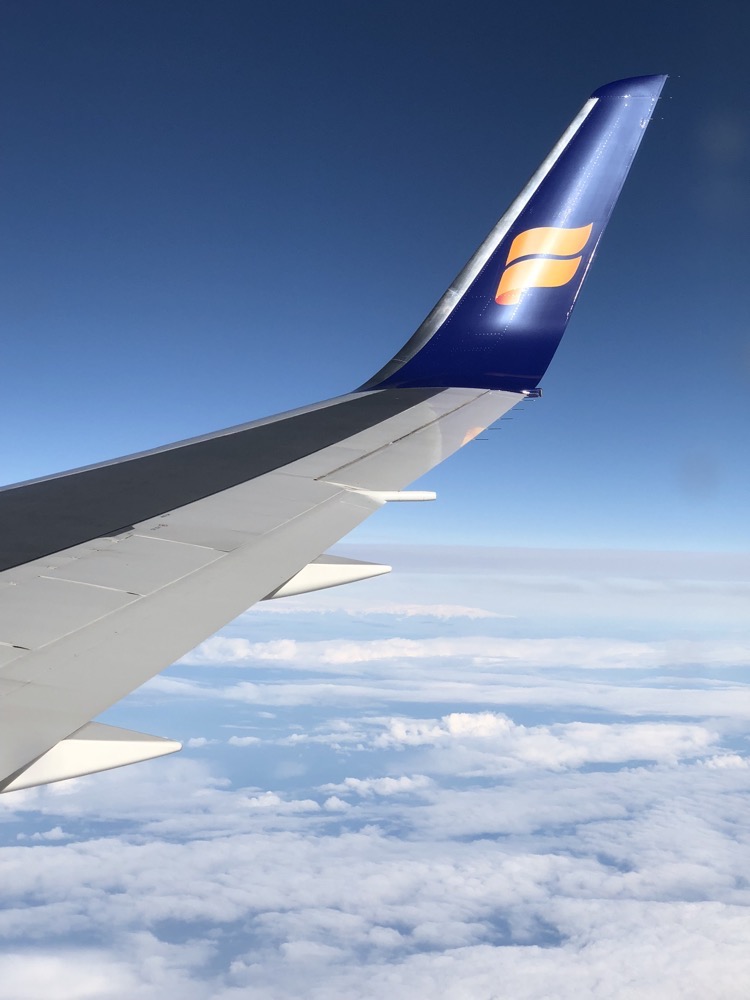 It was something like -30°C outside the plane and 96% humidity according to the little screen thingy… so we had all these tiny beautiful ice crystals forming on the window. 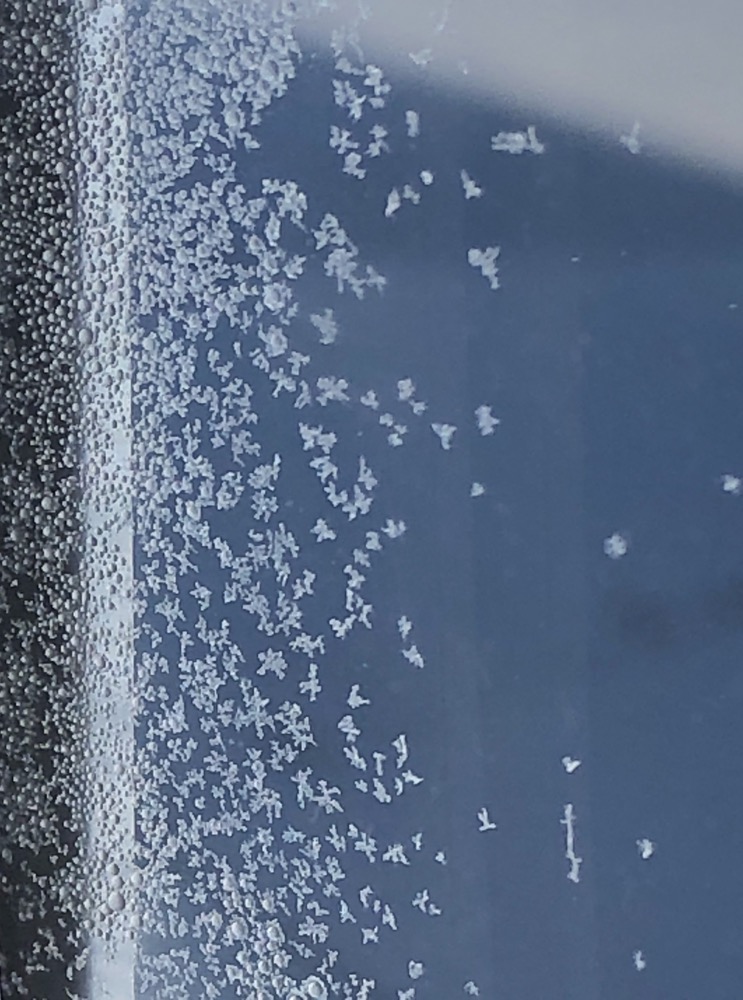 Flying in under the clouds over the lava fields. 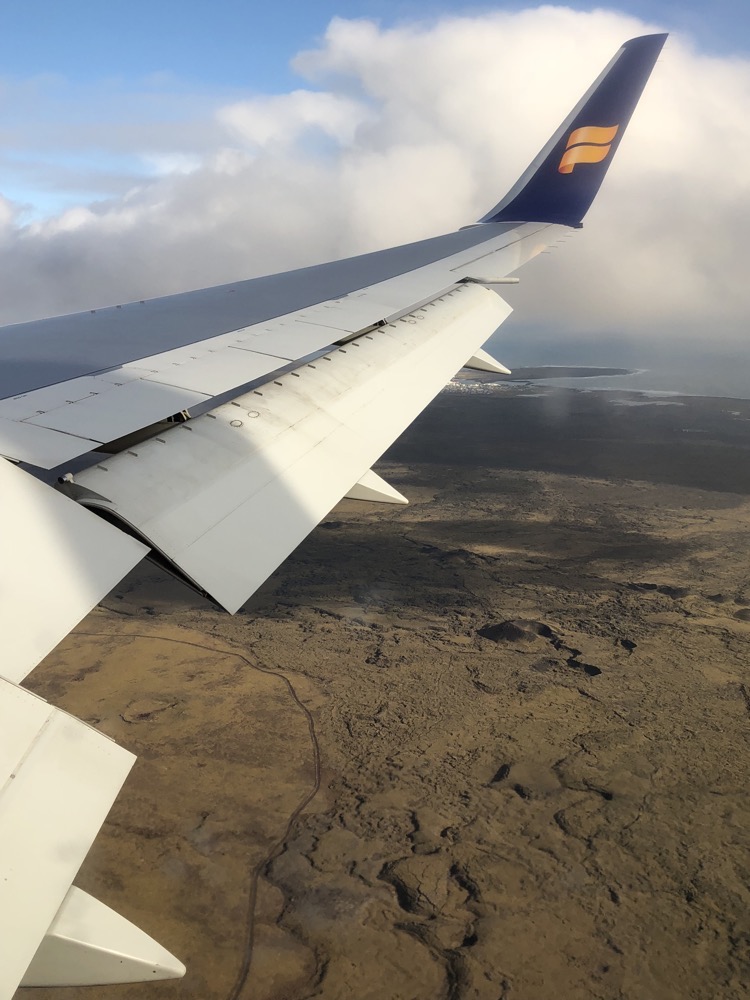 What looks to be some old settlement just outside of Reyjavik. 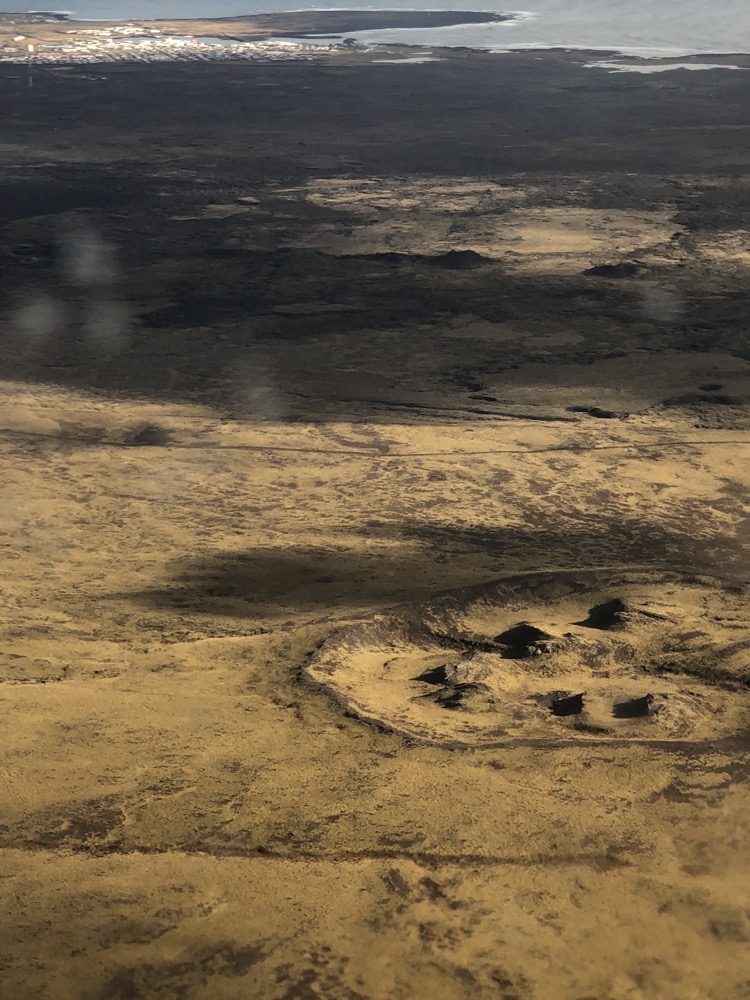 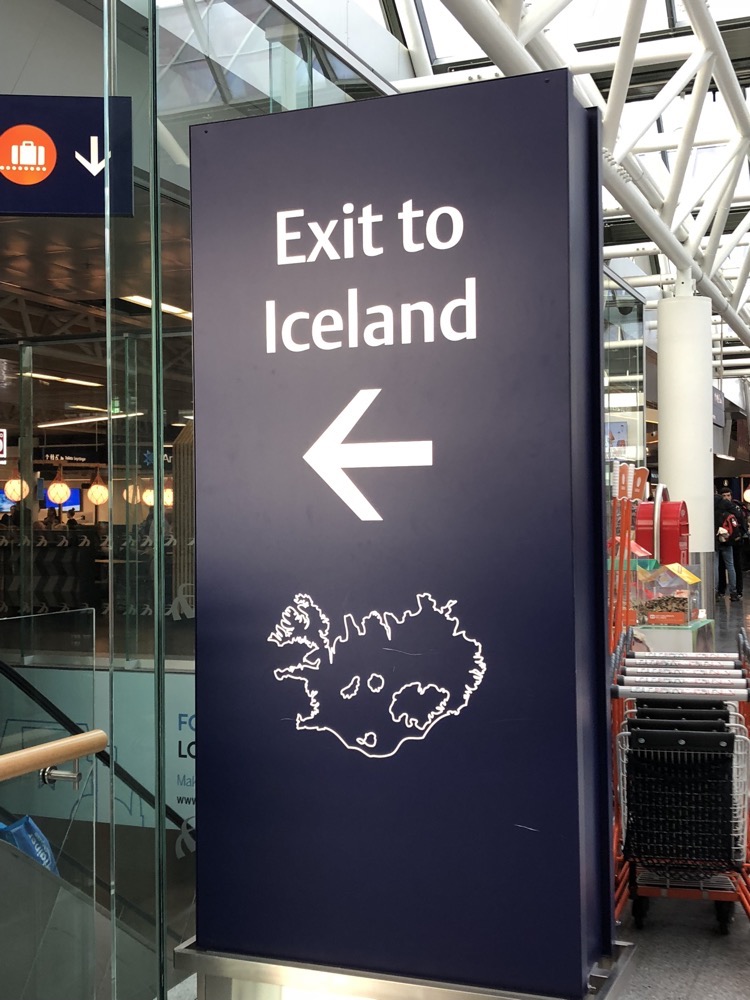 Duty free – sheep shit and ashtray flavoured!  Oh, someone please hold me back!  :/ 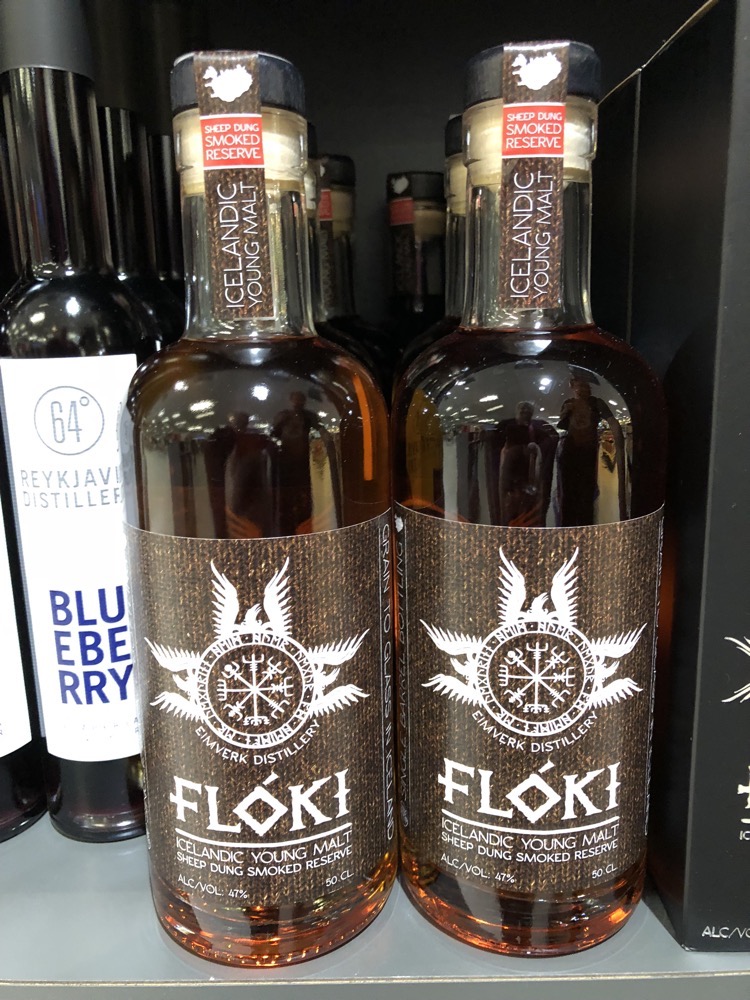 On the drive to our accomodation, we took a slight detour to see the Solfar Sun Voyager sculpture by Jón Gunnar Árnason.  It’s rare that I find a piece of civic art that I truly enjoy but this sculpture is beautiful, and so well located next to the Sæbraut Road on the harbour. It is intended to be a sort of dreamboat/ode to the sun that conveys a promise of hope, freedom, progress and undiscovered territory.  It’s beautiful and evocative and I hope to come back and take some more pictures in the different light after we do our lap of the country. 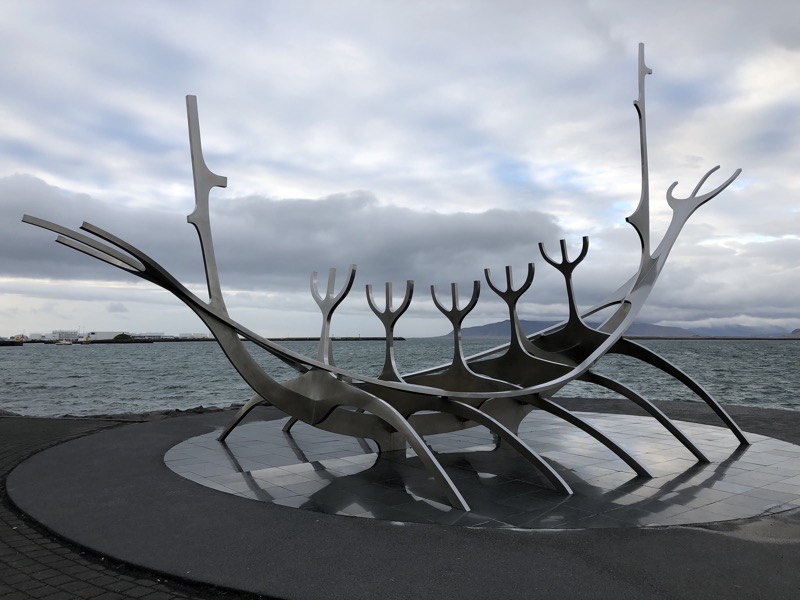 We then found our way to the Yellow Spirit House, also known as Gunnar’s Place which is a hop skip and a jump (two blocks) from the Ingolfur Square.  We checked in and made ourselves at home before heading out for a quick wander in the freezing cold – omg the wind is just biting right through my items of warmth – to find somewhere to go for dinner.

After a relatively modest breakfast at the hotel and then skipping lunch altogether, I had quite an appetite and was keen to try new things.  We ended up at the Saeta Svinid Gastropub which translates to either ‘Cutie Pig’ gastropub or ‘Cut The Pig’ Gastropub… still not entirely sure. 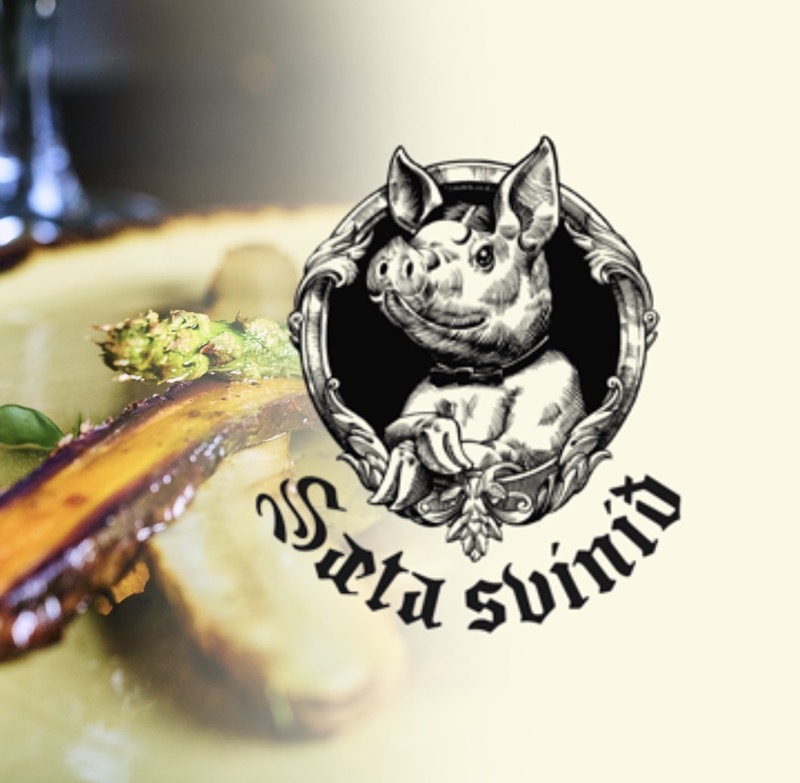 Tasting plates from foreground to background:
– Smoked puffin with a 64° Reykjavik Distillery cranberry liqueur sauce,
– Minke whale served on a smoky celeriac puree and malt sauce,
– Horse ‘carapaccio’ with rucola-mayo, crispy Jerusalem artichokes and parmesan.
Yes, you can get all judgy if you want – but when you go looking for local Icelandic food, these are the sorts of offerings, and as Mr K would say, “Travel is about experiencing something different and understanding other cultures.” 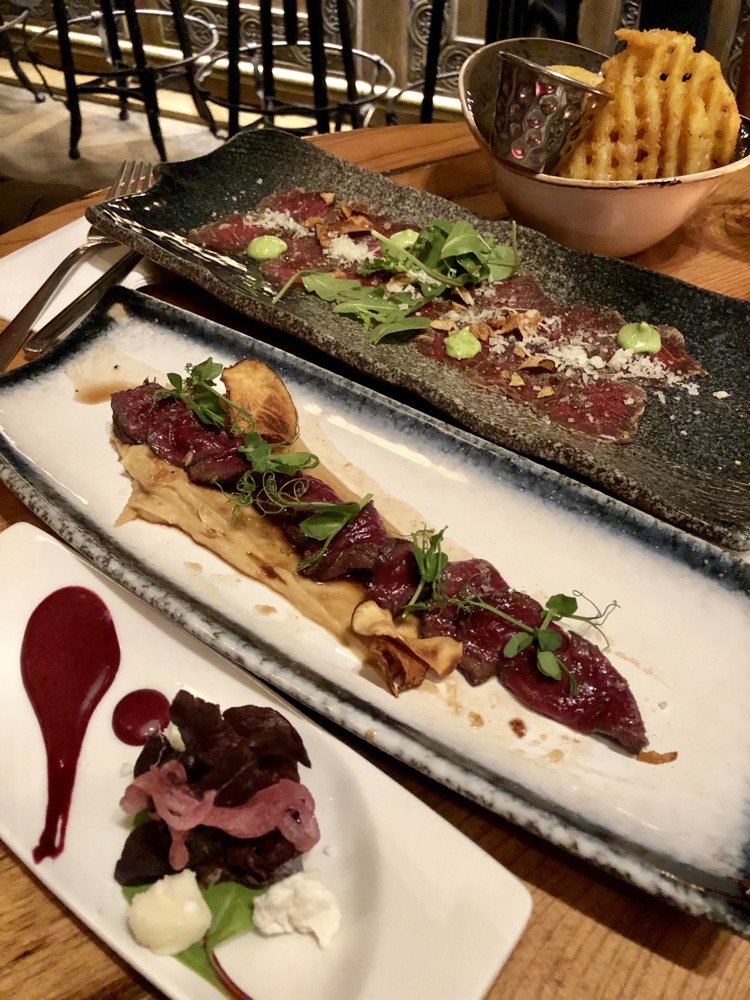 This is the first puffin I have seen in real life that wasn’t stuffed… even though I have been chasing them in my travels since 1995; without any luck (my timing sucks).  We spent quite a bit of time trying to decide what it tasted like, yaleman said it was like a ‘fishy chicken’, but to me, it looked like undehydrated jerky, but was sort of like soft and slightly buttery (like salmon) in texture – with smoky, meaty, and slightly gamy flavours.  Eventually, I decided it was similar to mutton bird with a smoky flavour (think, New Zealand hangi).  The minke whale was, as you might expect, somewhat tuna-like though a bit more meat-like in texture.  Like most people, I was a bit iffy about trying whale, but it was absolutely delicious – delicate flavours and just gently seared.  I am totally against mass Japanese style commercial whaling, but after seeing the whale meat at the markets in Greenland, in a place of subsistence living where traditionally they have to eat whatever they can get their hands on, my thoughts on whale are a little more complex than just, ‘fuck no’.  The horse carpaccio was also just fabulous and while beautiful prepared tasted just like horse that I’ve had in France and other places. 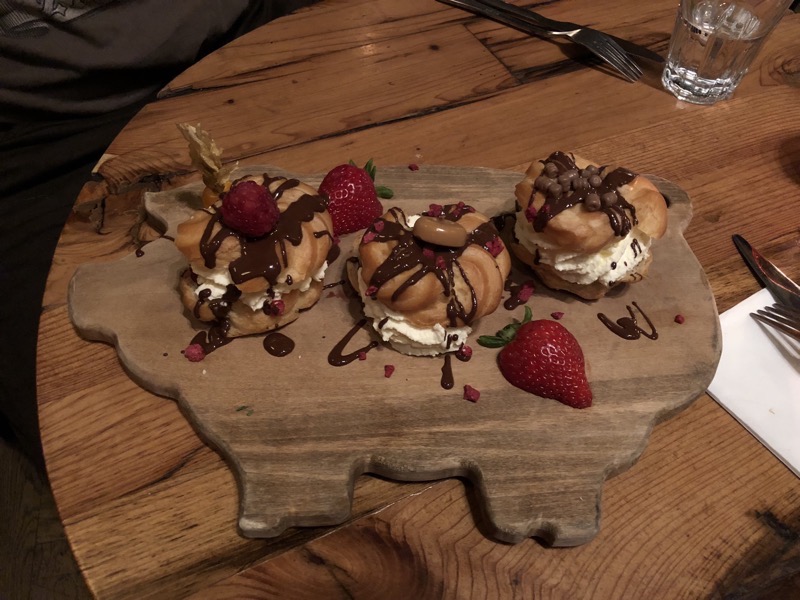 To finish off dinner we ordered the traditional Icelandic Trio of Cream Puffs (though I am not so sure how much Icelandic ‘tradition’ there is in choux pastry); on the right was some weird chocolate coated liquorice bullet flavoured thing, in the middle was a dulce de leche caramel flavoured pile of sugar, and on the left, well that was a full-on, ‘Where’s the diabetes warning’, super sweet raspberry and cream, ‘Erk, I’m totally leaving this for yale’ pile of sickly sweet ick all severed on a Cutie Pig timber platter.  🙂

Then it was time to rug back up to brave the elements – yep, feels like Canberra here at the moment and is rather windy which doesn’t help. Swung by a supermarket to collect a few grocery staples, freaked out over the $19.00 cost of a 500gm block of cheese, and the $6.00 cost of a cup of instant noodles (yale is so totally going on a diet here, we can’t afford to eat!  😉 ) before heading back to the BnB for a well deserved slightly sulphured shower and eventually bed.

Tomorrow – Gullfoss, Stokkur, and Thingvellir Take III before heading off into the countryside.  I can’t wait!