Woke up to the dulcet, (and somewhat familiar), tones of construction site reversing beepers… huh?  Aren’t we supposed to be at some remote tropical island this morning?  *looks out window*

Why yes, yes we are – I see rainforest and palm trees aplenty, however this remote tropical island is in the middle of refurbishing/reconstructing their docks, and there are men in high vis vests, pumps, digging equipment, water pipes, small backhoes and and rollers and things going everywhere.  C’est la vie! 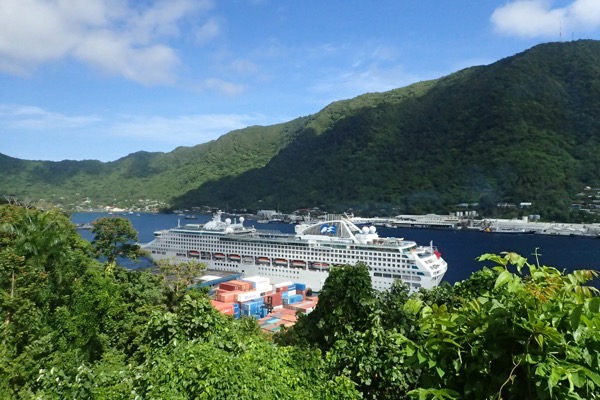 Located in American Samoa, and pronounced, ‘Pahngo Pahngo’, the town of Pago Pago lies on the island of Tutuila, which rises seemingly out of the middle of nowhere from the deep, deep blue waters of the South Pacific.  The town itself is in a magnificent horseshoe shaped harbour with glorious views to be found in every direction – seriously, look in any direction and be greeted with another beautiful vista.  From the upper decks of our home, the Sea Princess, we could see beautiful mountains and the gorgeous blues of the harbour and the sky, in ever direction of the compass.

We got off the ship fairly early hoping to find another local-run, dockside tour and we were not disappointed.  Ship tours can often be a bit overpriced and overcrowded for my liking, and thankfully these islands often have plenty of small operators willing to pick up pax and take them on a tour of the island.  We found ourselves with about 20 other ship passengers, on a rickety old bus that looked like it was from the 1960s and was was as comfy as you would expect a 50 year old vehicle to be!  No air conditioning, hard bench seats and limited to non-existent suspension seems to be part of the island experience.  🙂 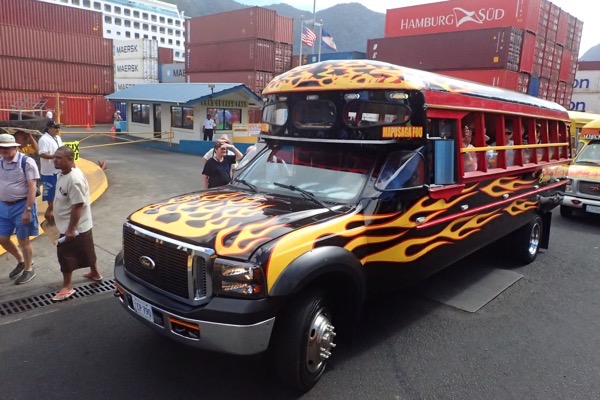 We set off for some scenic lookouts, the first of which was the location of an old cable car that used to go across the harbour to access a tv antennas used by the local station.  The cable car was in use up until a tragic accident on Flag Day about 20 years ago (Flag Day is April 17th, and commemorates the original raising of the US flag on Samoa), when saw a plane doing a ceremonial fly by, accidentally collected the cable car cables that stretched across the harbour and subsequently crashed, killing over a dozen people.  The noise and the smoke from the explosion could be seen from across the island, and the cable car was never rebuilt for some reason… 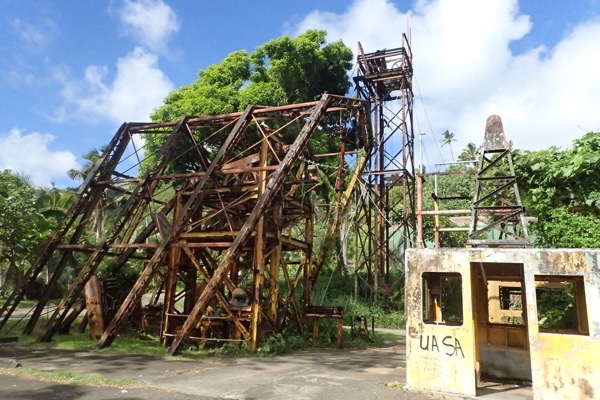 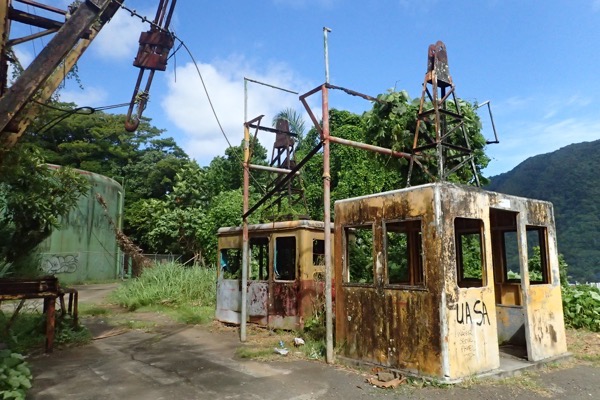 After this we head off in our trusty bus, with low gears grinding and engine complaining, driving over the steep mountain to the village on the other side of the American Samoa National Park.  The drive over offered views that leave you feeling like you can see forever, as we wound our way back and forth through such an amazingly thick and lush rainforest – full of many, many palm trees, thick undergrowth and a wide variety of beautiful plants and stunningly bright and attractive flowers. Just beautiful. 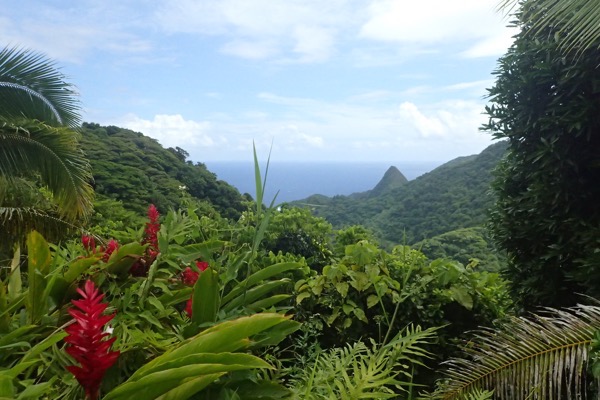 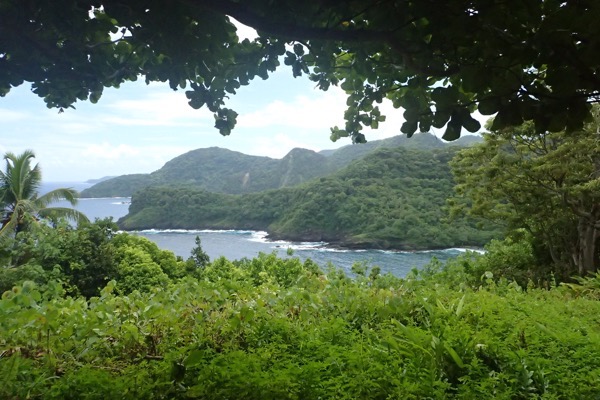 People have lived in Samoa for at least 3,000 years and according to our new friend, Mike the tour guide, the Samoan are the original Polynesian people who then spread to Hawaii, New Zealand, Fiji etc… I think this point is probably debated somewhat by other island nations though. 🙂  The Samoans share that uniquely Polynesian culture – the influences of which, are evident throughout the region despite the hundreds, or even thousands, of kilometres separating the various geographically disparate islands.  The islands have similar oral traditions, wood carving styles, ava (/kava) ceremonies, and weaving and painting techniques that share similarities from Hawaii to Papua New Guinea to New Zealand. 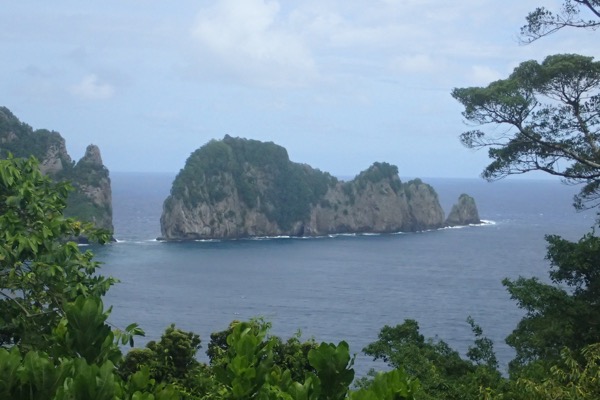 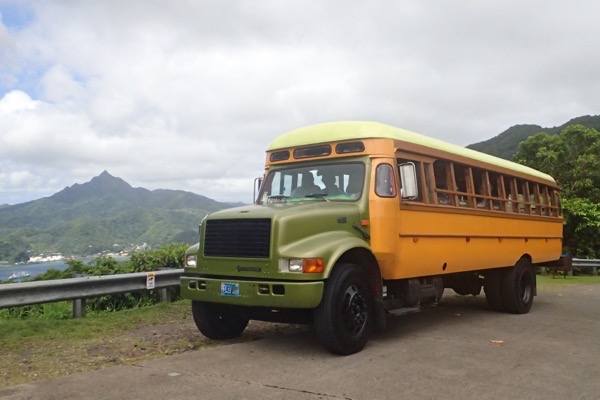 Samoa apparently only came to the attention of the rest of the world, (i.e.: Europe, during the Age of Discovery), around the 1700s by which time, Samoa became a critical stop for European merchants heading west.  Samoa, like many other Pacific island nations, rapidly adapted to Christianity within just a few decades, until now, when many Samoans themselves are missionaries throughout Polynesia.  Their well kept churches stand out proudly in every village we passed through. 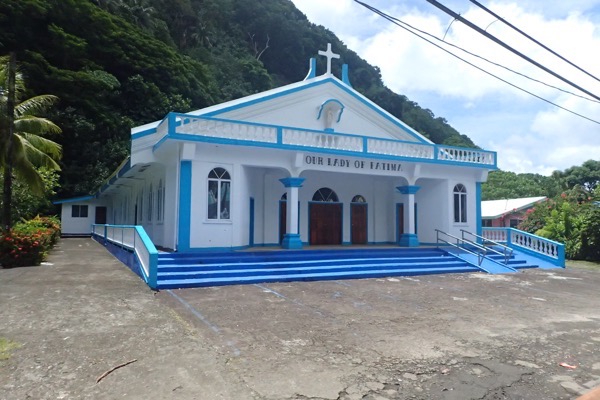 Samoans seems to have struggled to maintain their sovereignty as the British, the Germans and the Americans all competed for dominance in the Pacific in the 1800s.  Various Samoan factions, preferring one European influence over another, rose and fell and even landed the islands in civil war on more than one occasion. 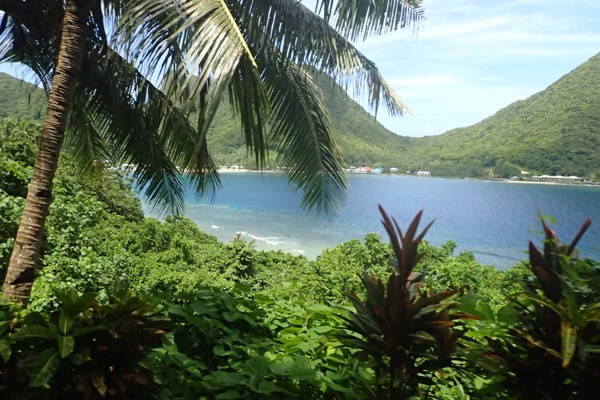 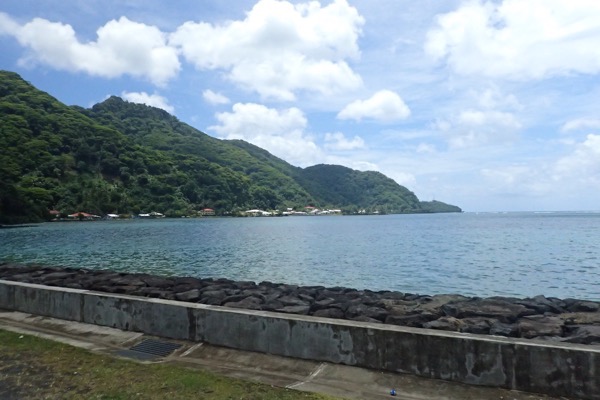 America Samoa’s chiefs then formally ceded the island of Tutuila to the United States in 1900, some of Samoa’s other islands, such as the Manu’a Islands followed suit in 1904.  There are lots of western influences here, but you can still feel the Samoan, islander way of life.  Though the Island’s offical status is somewhat ambiguous at times – they are a Unincorporated Territory of the United States of America (and this Aussie has no idea whatever that legally entails) – their relationship with the US solidified during WWII as the US military made good use of the location as a preparation point for imminent Japanese invasions in the Pacific.

More recent history has seen American Samoa begin moving towards more self government – they have a house of representatives led by the recently re-elected Governor Lolo, and an upper house consisting of traditional village chiefs since the American Samoan Constitution came into effect in 1967.  The relationship with the US is a weird one (imho).  The US continues to fund a lot of American Samoa’s infrastructure, and this is really obvious when compared to other Pacific islands that do not have that financial support, and the people here are US citizens, and are able to move freely in/to the US… but they can’t vote for President?  So they’re citizens but not full ones or something.  I dunno, need to research it a bit.  Doesn’t make a lot of sense to me. 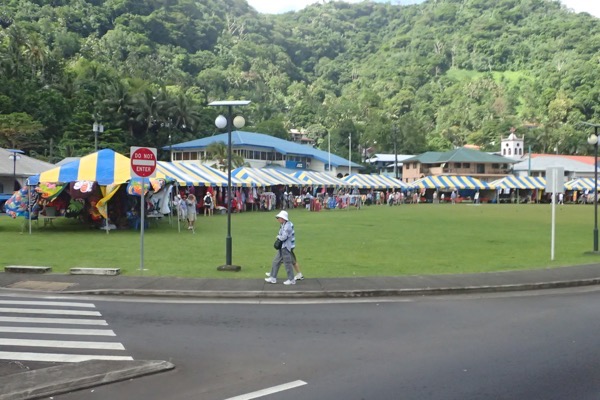 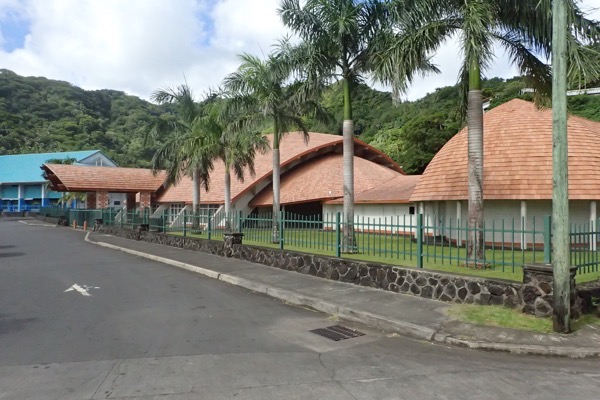 One of Mike’s anecdotes illustrated why American Samoa is constantly striving to become more self regulatory, whilst maintaining their unique status as a part of the US.  Mike tells us that the minimum wage here is USD$5.50 per hour. Which is kinda great – the people are guaranteed to make decent wages, however the more that companies are required to pay their workers, the higher the likelihood that those same companies will move their entire production facilities to somewhere much cheaper, like Indonesia.  For example, the minimum wage is putting an ever increasing pressure on Samoa’s tuna canning factories, which is the biggest industry here… bigger than tourism.  Samoa has the single biggest tuna canning factory in the southern hemisphere in fact, and as such, they employ a large amount of local people. However if (as Mike asserts) the companies are continually pressured to pay their workers the same as someone who lives in a high cost environment, like San Diego or Sacramento, then the likelihood that the tuna companies will eventually relocate to somewhere cheaper increases.  So they want to be able to regulate their own minimum wages, and other government regulated functions, for similar reasons.  American Samoa has been constantly trying to refine and balance their hugely important relationship with the US to try and allow them to make concessions that they feel are necessary for their unique location and requirements. 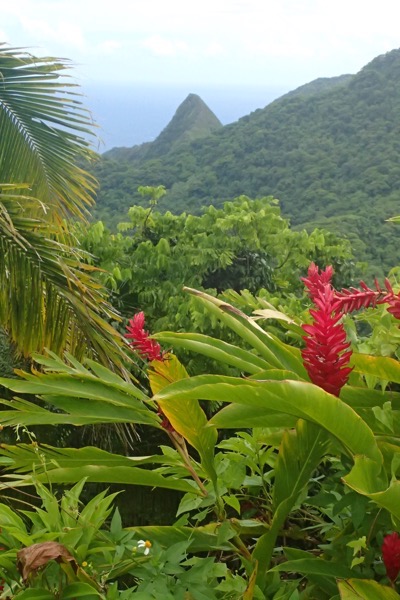 Anyway, all that geopolitical stuff aside, this place is like paradise!  No, I mean it – it looks just like paradise always looks in the movies!  It’s so beautiful; thick luscious rainforest, rugged mountains plunging down to the jagged coastline, with little inlets of white sandy beaches… the people are happy and welcoming and full of that lovely Polynesian cultural charm that makes you warm to them so easily.  I could come back here for a couple of weeks with a small car (not sure they have those though, plenty of big yank tanks getting around!), and just explore the tiny villages, snorkel the coral reefs and adventure out to the smaller islands by boat.  The hot and humid aside, this place could easily become my favourite Pacific island (everyone has one of those, right?)  Though perhaps I shouldn’t speak too soon, we are off to Tahiti next! 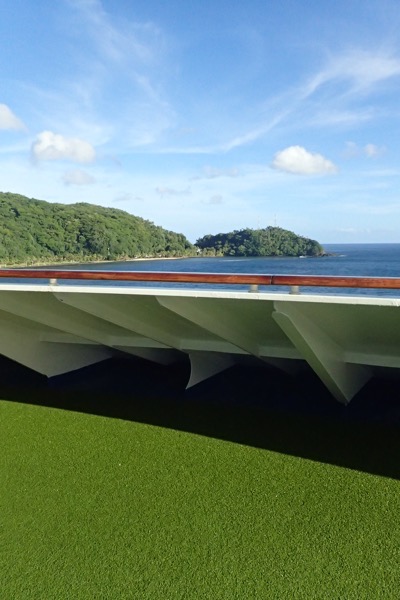 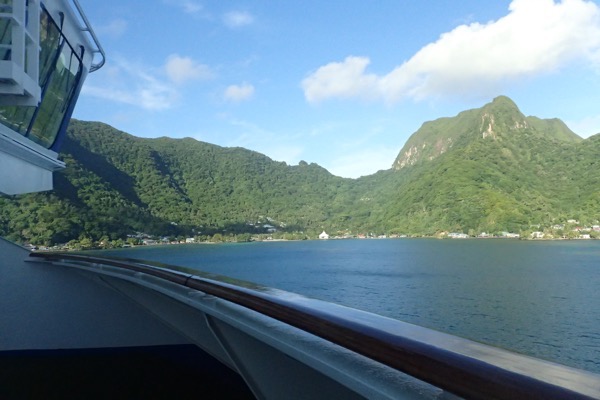 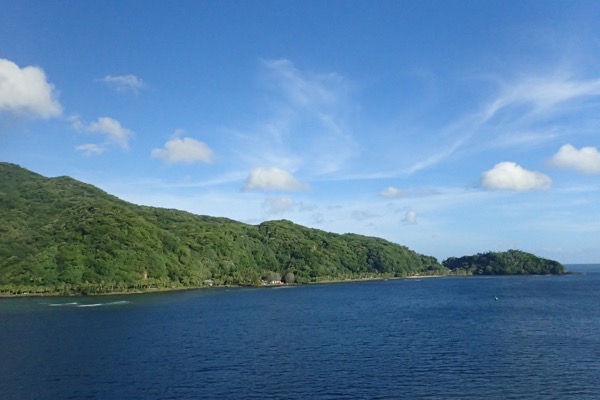