Our day was kinda highjacked today, we were going to go into town to do some shopping, find a sake brewery, and hunt for fresh sashimi, but half our day was shanghaied dealing with insurance companies and stuff like that so we didn’t get off the ship until nearly 11am and all plans went out the window… that’s okay, these things happen.  A lot of the main attractions in the Iwate prefecture are up to an hour out of Miyako (like the amazing caves I intend to visit if I ever make it back here) so we knew we didn’t have time to do much at all.  As it happens we debarked just in time to see an unusual amount of official brou-haha because today, the Diamond Princess was visiting the town of Miyako for the very first time.

Miyako is a town that was devastated by the tsunami on March 11, 2011 and is still in the middle of rebuilding.  The township was ecstatic to welcome the ship (and her 3,000 well monied tourists) and they turned out in colourful display to welcome the ships company and formally present the traditional Maiden Voyage plaques that ships receive when they visit new ports. 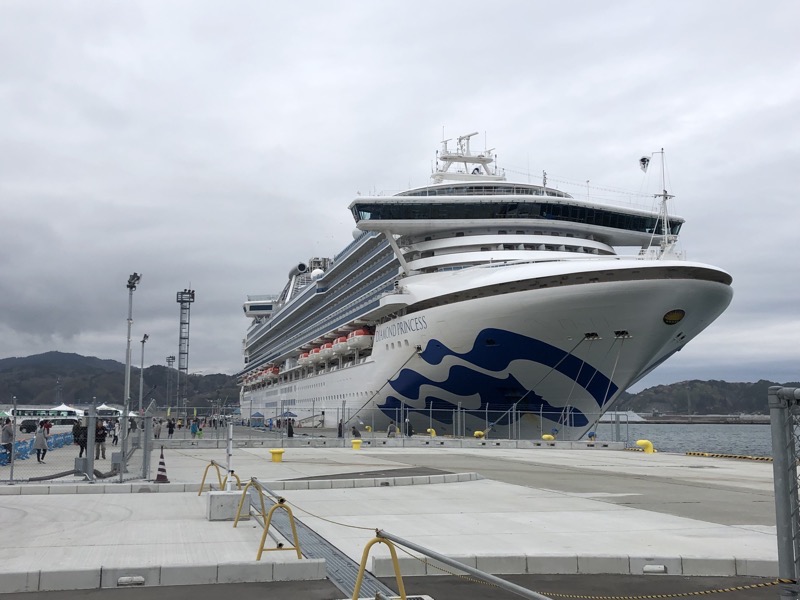 The town’s dignitaries, including the governor of Iwate, the Mayor of Miyako and a host of other important looking middle aged men waiting for the ceremony to commence… 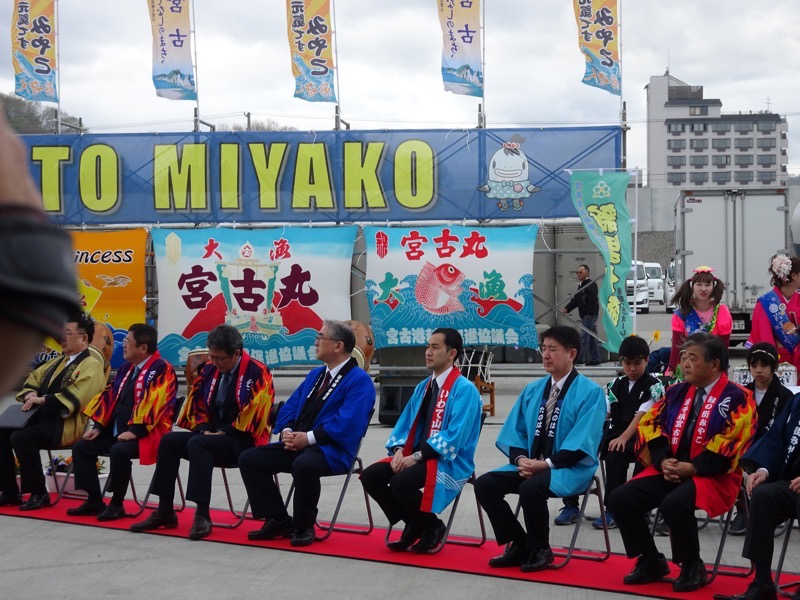 The governor and the mayor listening to the ships captain giving a speech. 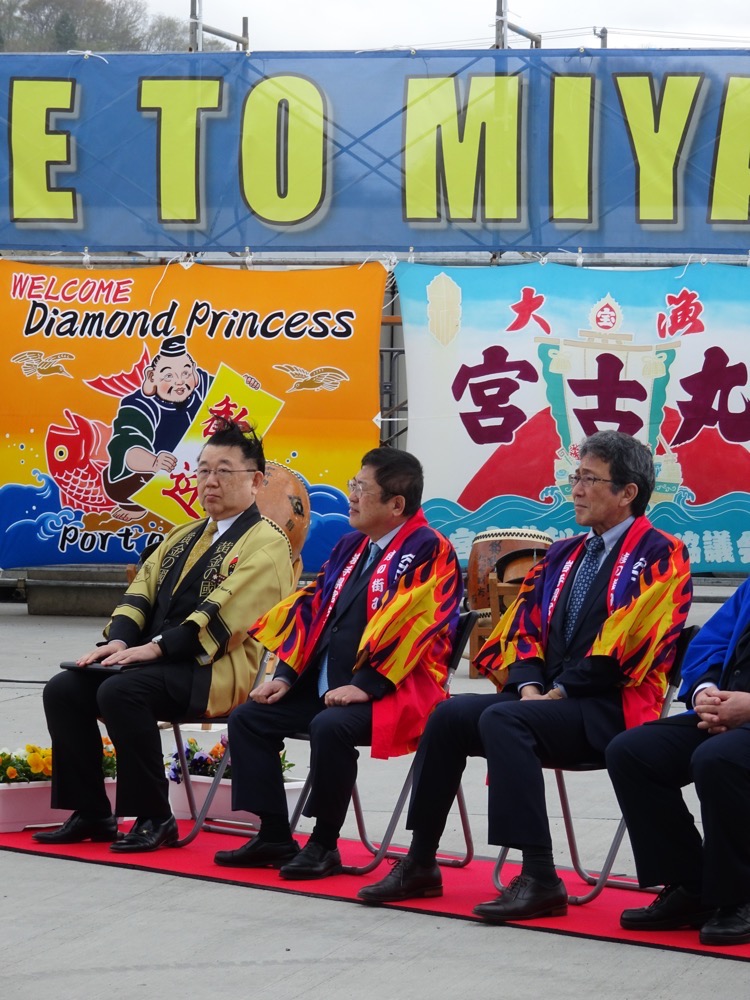 The Mayor of Miyako who made a point of greeting us personally – I mean, I think he greeted nearly everyone who came off the ship by shaking hands and asking where we came from.  He was very friendly and had pretty good English. 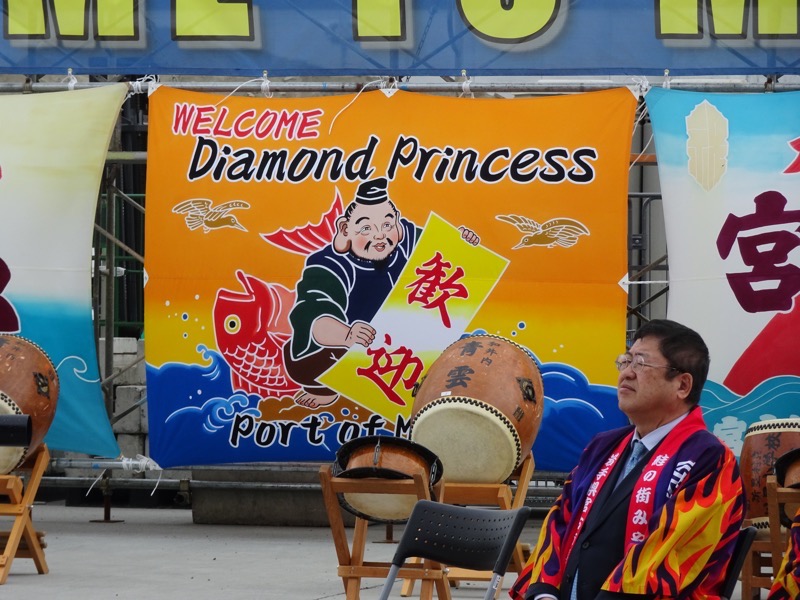 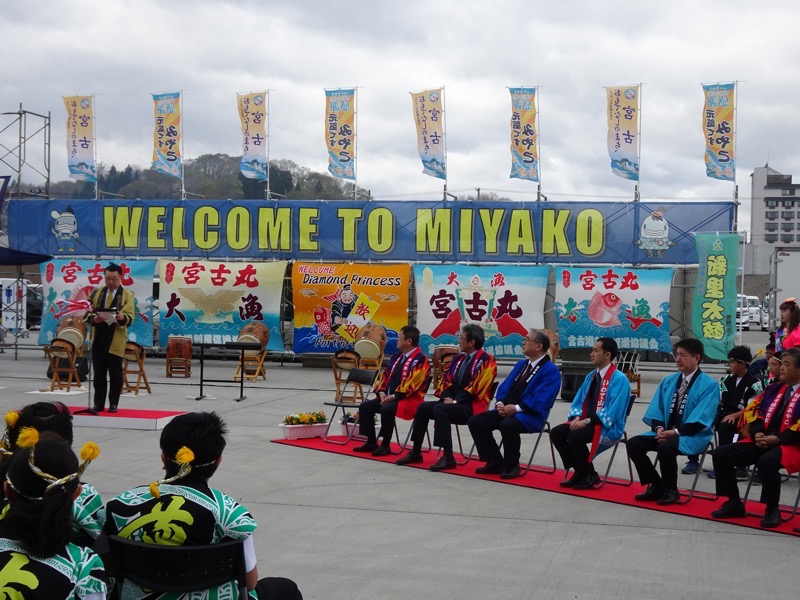 The town has a bunch of cute mascots… not quite sure what they are?  A salmon, a dolphin and a couple of dragons? 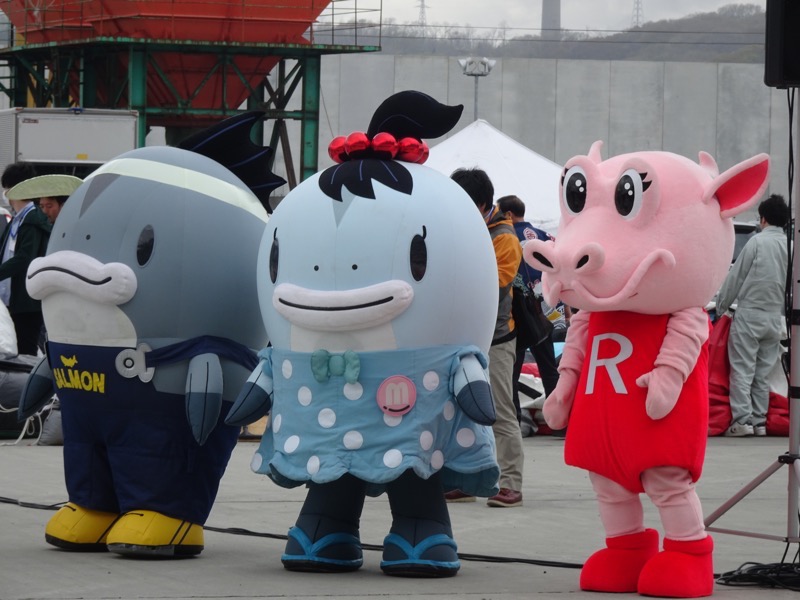 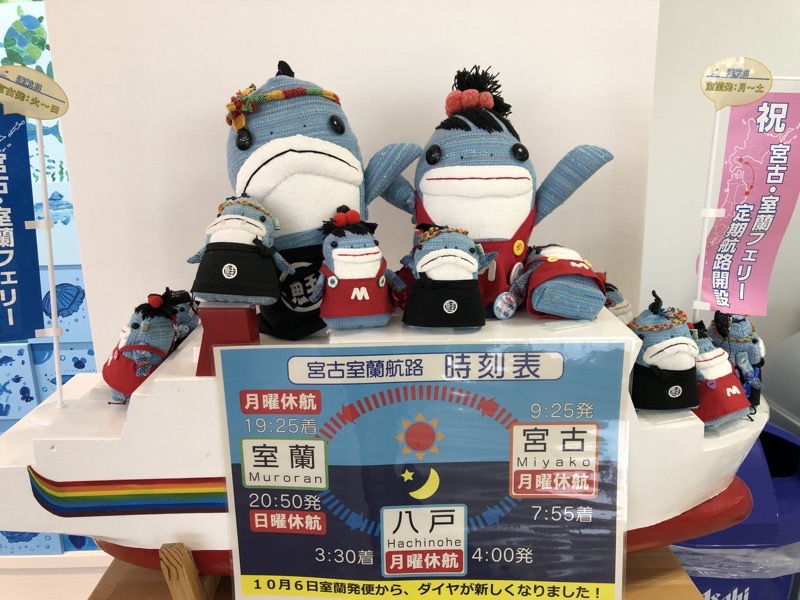 It was not just the local dignitaries, but the local merchants were really happy to see the ship in port as well, and turned out with food trucks, market stalls, sake vendors, school children doing caligraphy and all sorts of cool stuff.

I particularly loved this little sign near a Takoyaki food truck promising a ‘small octopus friend in every ball’.  🙂  Fresh Takoyaki from food trucks is delicious by the way – much better than the frozen versins they serve us at the sushi trains at home, that have hardly any seafood in them. 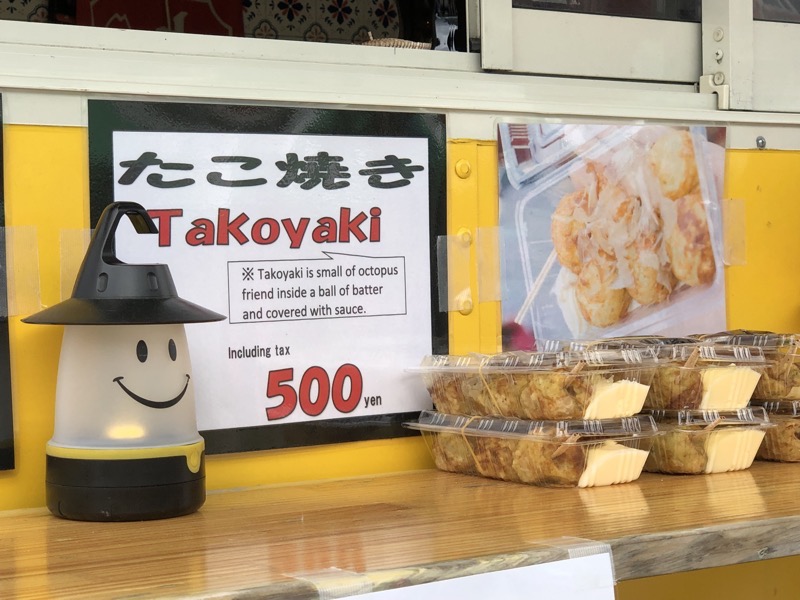 Today is also ANZAC Day, and the ship had a dawn service at 4:28am, which oddly enough we didn’t make it to.  Last time I was on a ship for ANZAC Day (a cruise out of Australia though) they did a dawn service and another service at 11am… this time they didn’t have the second service and I didn’t notice in the schedule that it wasn’t going to be happening.  This cruise seems to be made up of about 800 Australians so I can understand them not doing two – but I was sad to miss it. 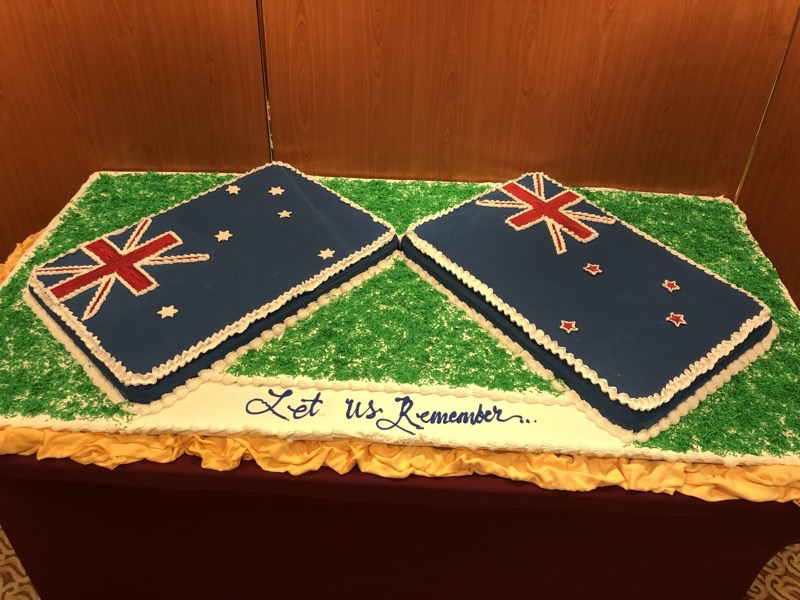 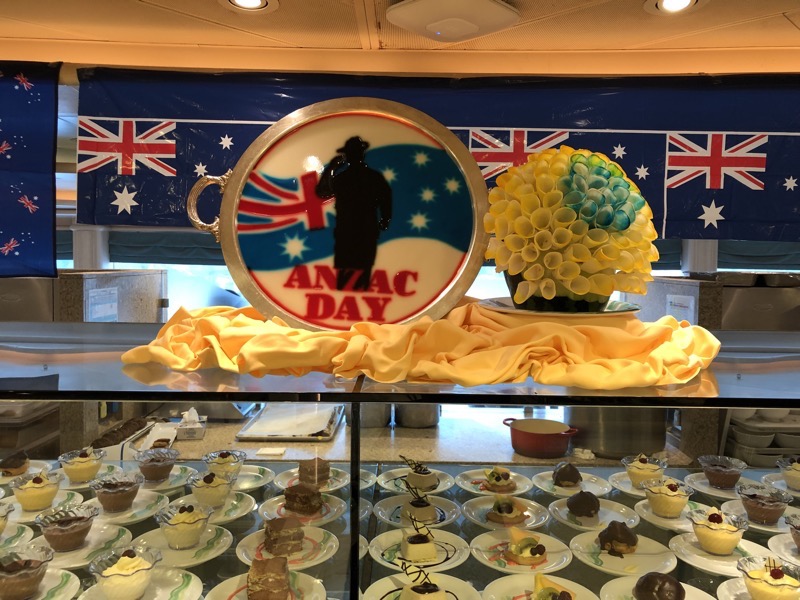 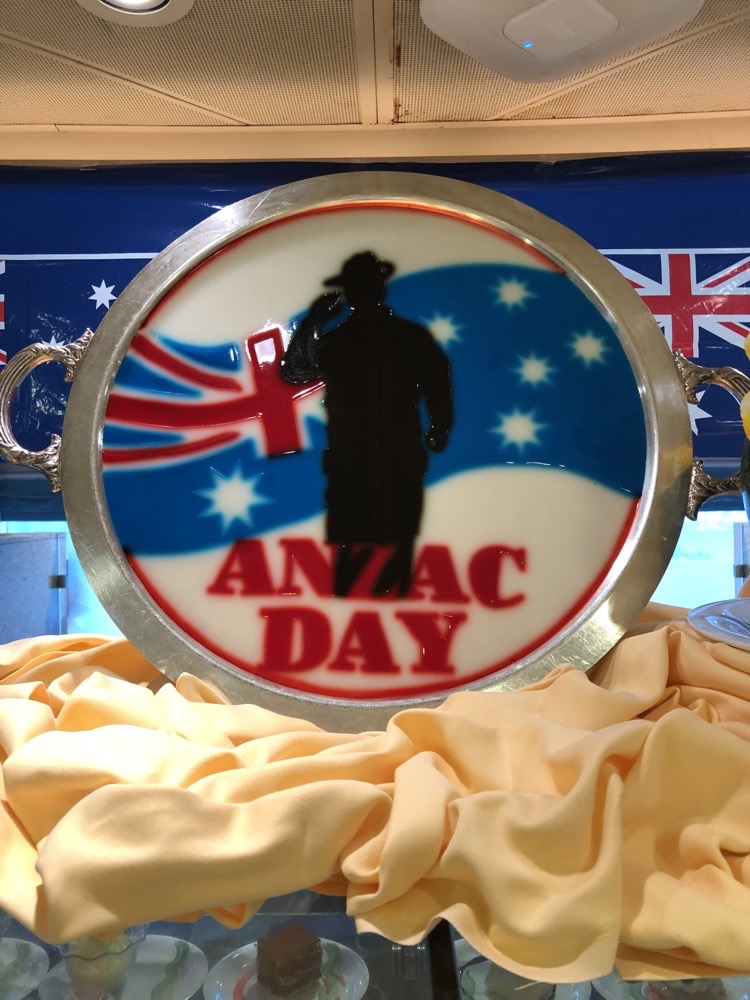 We had planned to go to Sabbatini’s for dinner last night to celebrate our anniversary, but after a few hiccoughs and some stuff to sort out back home when we got back from Hirosaki Castle, we didn’t really feel up to it anymore, so we had postponed until tonight instead.

The food at the specialty restaurant is lovely, but I think when you have cruised as often as we have, you do start to find the whole thing a bit too predictable.  The menu rarely changes and if you’re going for a ‘special’ night out, you kinda want to try something new. 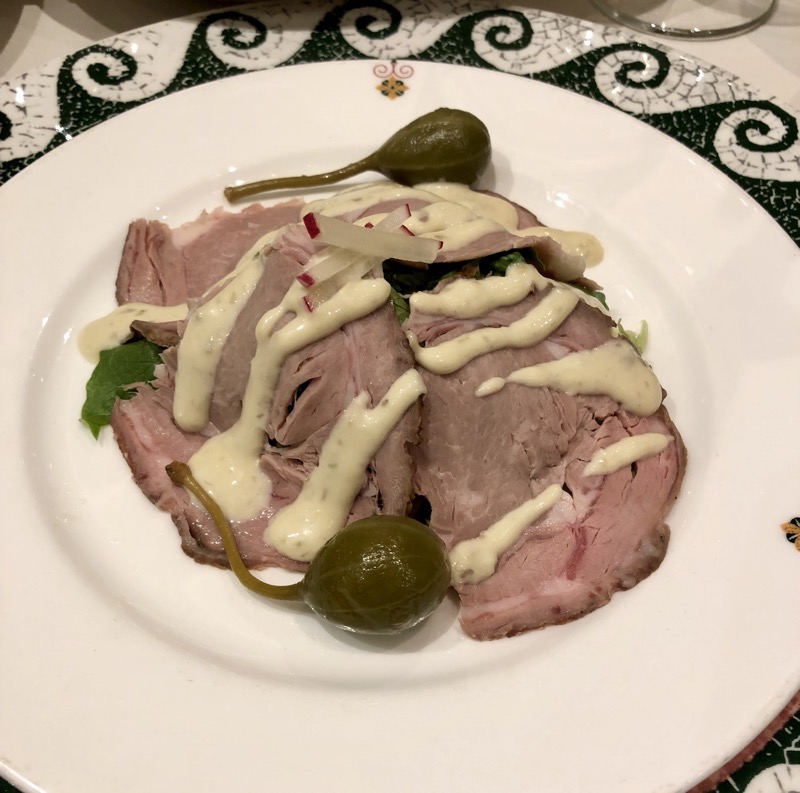 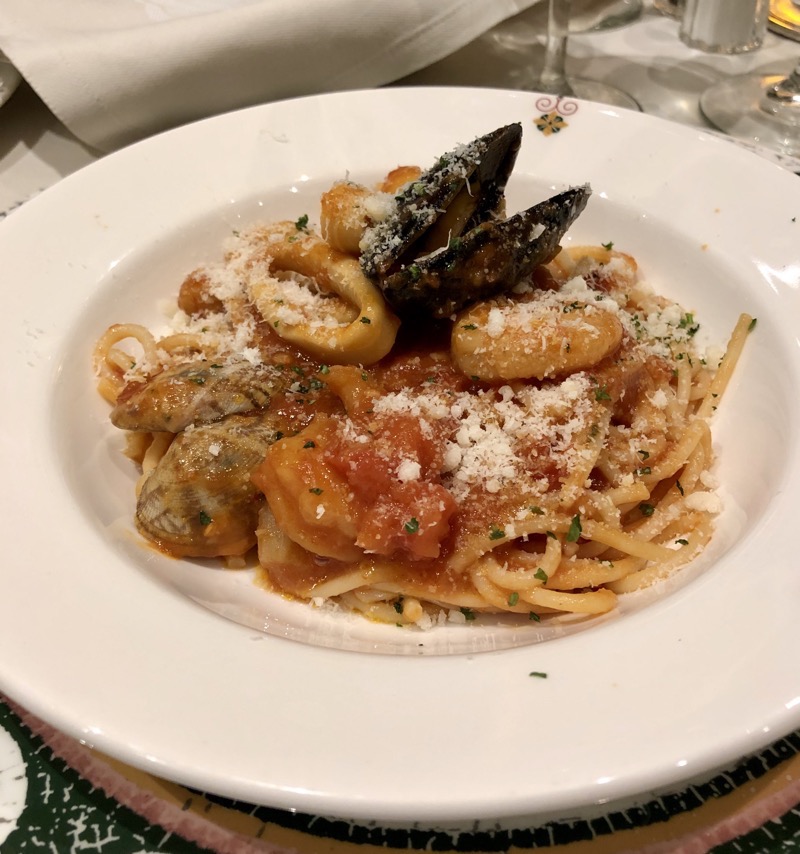 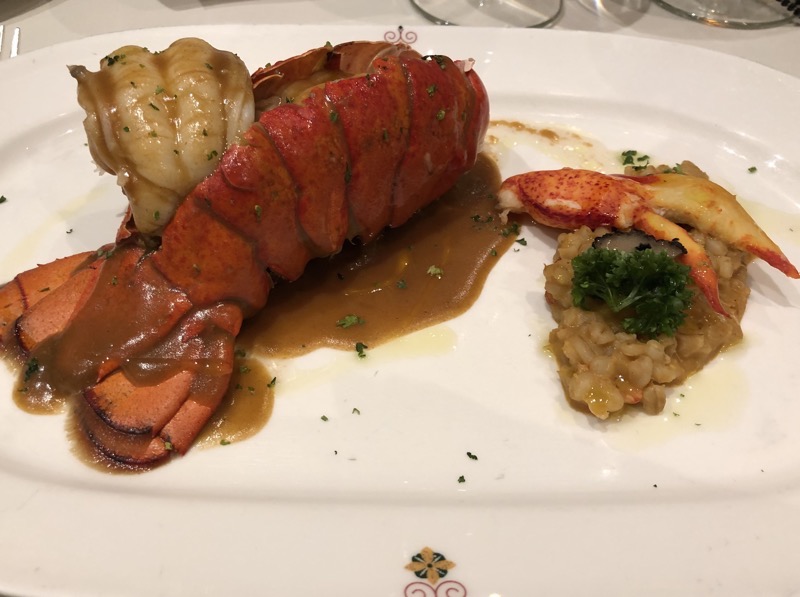 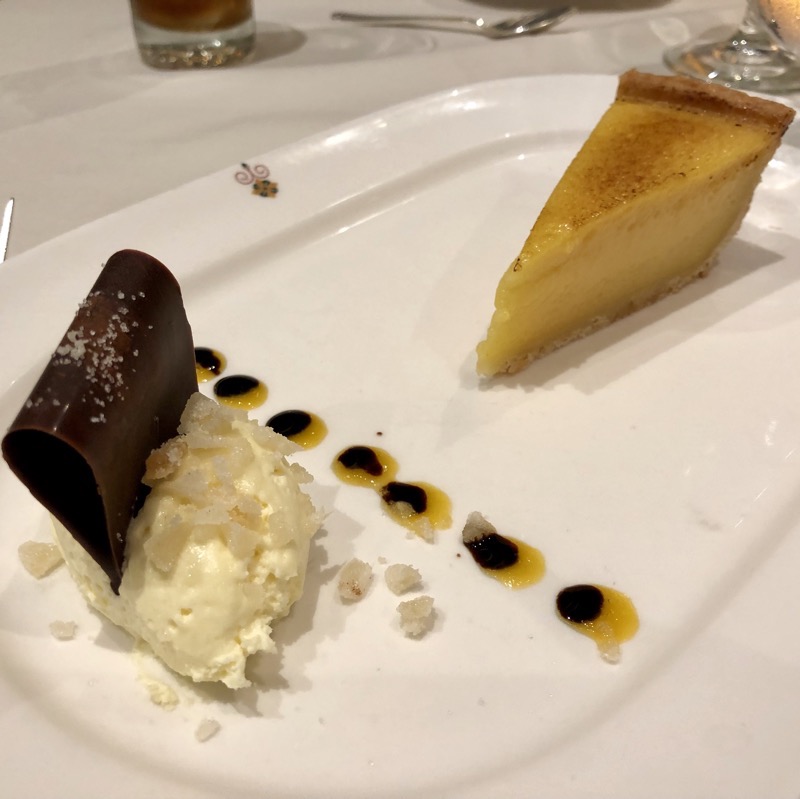 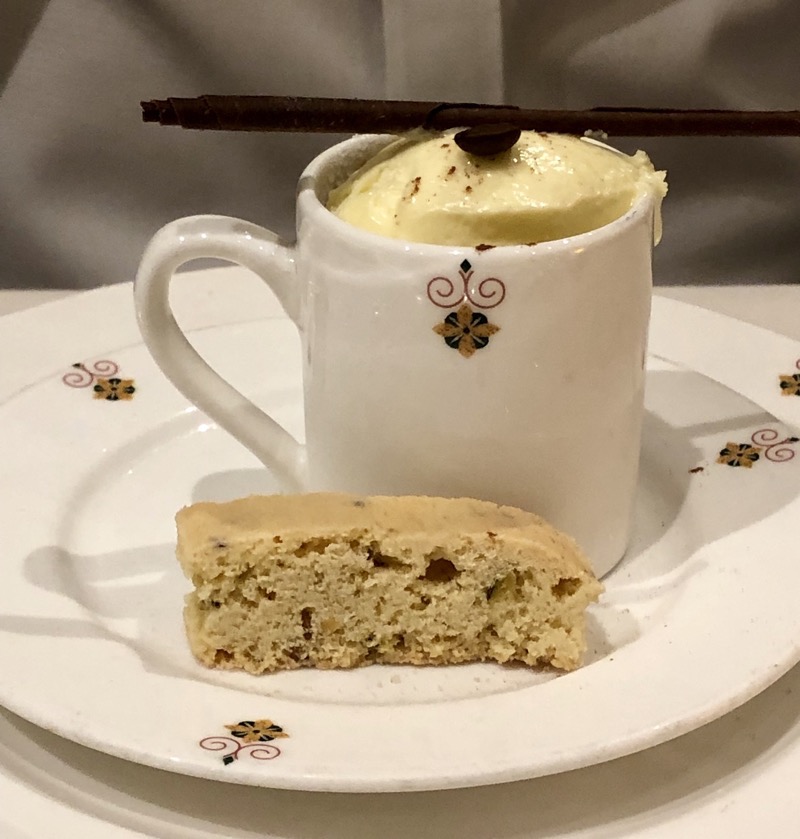 After dinner we went to check out a new show that Princess has created especially for its Asian cruises called ‘The Secret Silk’ that was created by Stephen Schwartz – the award-winning composer of Wicked, Godspell and Pippin, in conjunction with John Tartaglia, who has starred in Broadway hits like Avenue Q and Beauty and the Beast. We had pretty high expectations given the talent involved, but it felt like a swing and a miss as far as we could see… it was a Japanese inspired story with an Asian style costumes, dance choreography and set design, all set to Western music which really ruined it… the whole thing felt like the producers didn’t ‘trust’ Western audiences to be able to connect with and understand music that was congruous with the themes they were attempting to work with.  So it was weird and disjointed.  Which is a shame because it looked great. 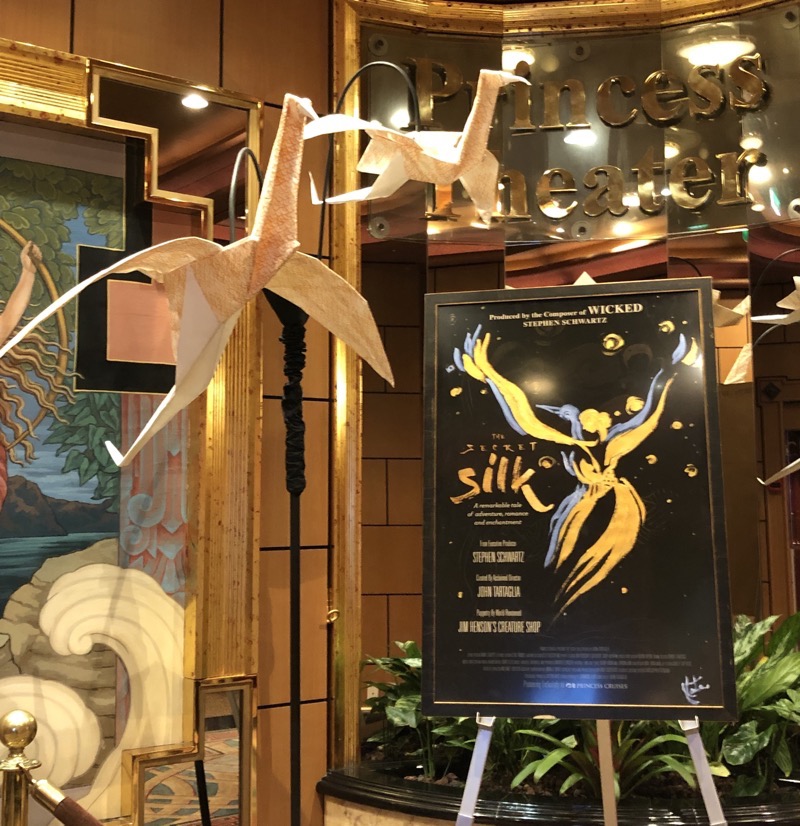 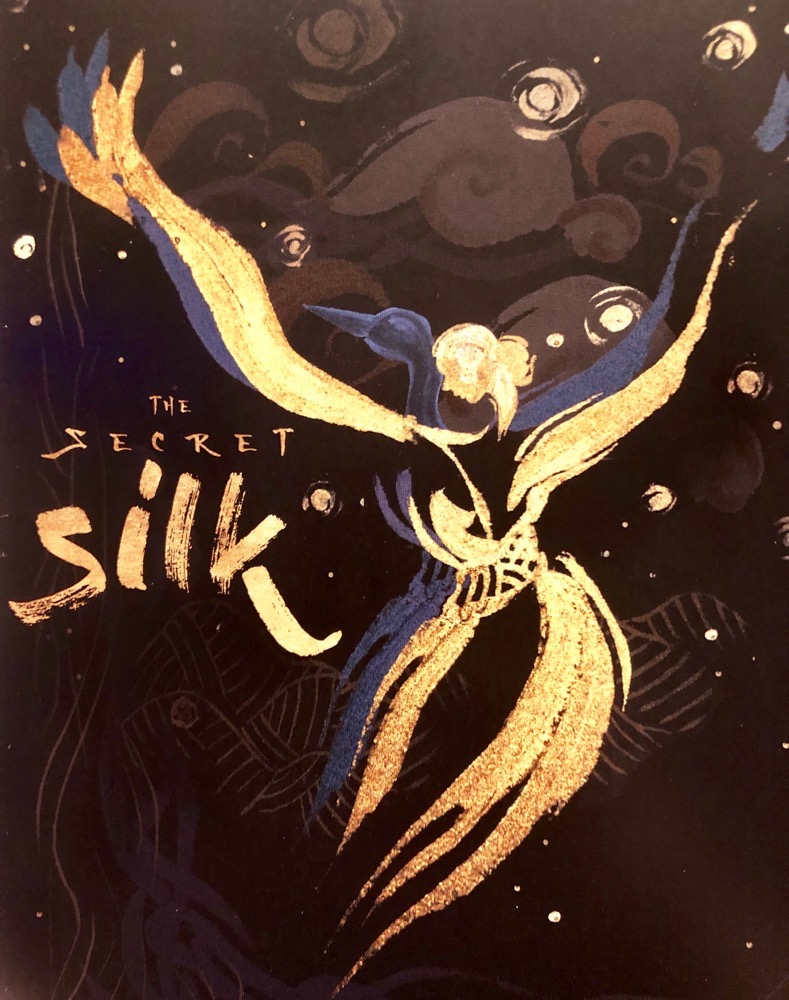 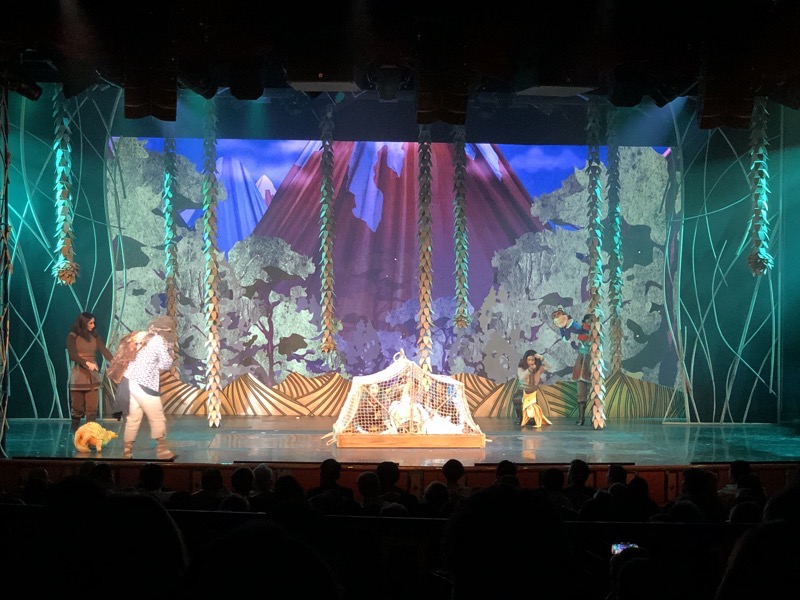 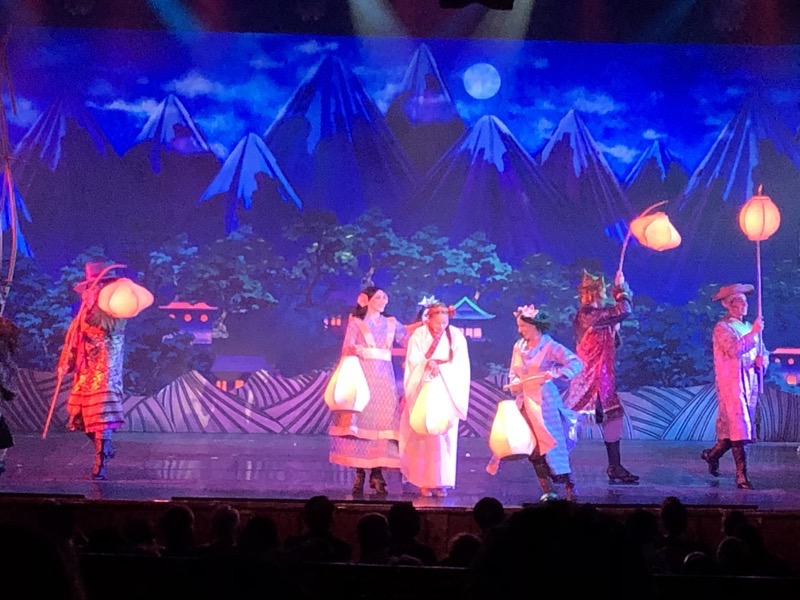 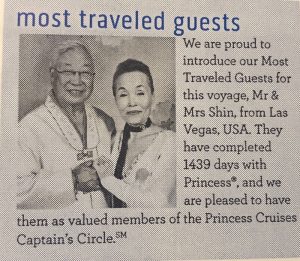 As a little weirdness that I probably shouldn’t be putting in here but which gave me quite the giggle – we were in a lift well today and saw this lovely and very elegant couple who have been swanning around the ship (and I do mean swanning, they have been ballroom dancing in the middle of the atrium at every opportunity) getting ready to go down to dinner.  Mrs Shin was shaking a shawl around her shoulders and some very practical white knickers fell out of her shawl and onto the floor, which Mr Shin tried to hastily retrieve and then rush back to their room.  🙂  They have been walking about the ship like they were at home – but perhaps that is taking the ‘home away from home’ concept a little too far.  She was so embarrassed, it was adorable.