People often ask me if I am excited about my upcoming trip and I always find myself replying, “Not really.”  Which is both true and untrue at the same time.  ‘Yes’, I am always anticipating the adventures to come, but ‘No’, I don’t usually allow myself to get excited about anything until the long haul flights are done and dusted.  They wreak havoc with my back pain, meaning that a flight to London is more likely to be preceded by anxiety rather than excitement.  C’est la vie… it is what it is.

Our flight this trip was no worse nor any better than ones we have taken in the past.  We flew Cathay Pacific and had a stop over in Hong Kong.  The first leg to Hong Kong was pretty much an empty plane – I swear nearly every passenger was laying down asleep for the 9 hr flight. Oddly, with so many passengers laying down it was interesting to see how many chose to lay down with their feet towards the window and their heads towards the aisle, where you’d think there’s a greater risk of being knocked about… weirdos. The second,12 hr, leg from Hong Kong to London was the complete opposite and packed to the gills – YUK!  Never mind, I got through it thanks to modern pharmaceuticals and a determination not to think on the pain too much.

Arrived in London safe and sound, but did have a massive delay coming through border processing – we must have stood in line for little over an hour, which in itself would still be problematic for my stupid back, but after 20+ hours in transit was my very own private customs hell for the duration.  Honestly, the Disneyesque rope system does nothing to encourage the orderly movement of the hordes of Chinese tourists that filed off about four plans that landed when ours did.  It was barely controlled chaos with border guards using GOOGLE TRANSLATE to ask people questions.  FFS, it shouldn’t be that hard. 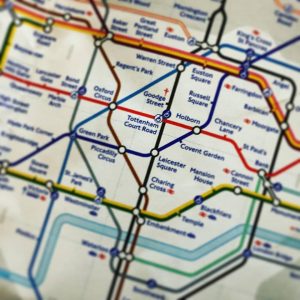 Then it was onto the tube and heading into town to find out hotel all of which landed us here and getting cleaned up about 2 hours later than anticipated.  We have chosen to stay at the St Giles Hotel just off Tottenham Court Road in Camden this trip, seemed like a nice central spot and they have plenty of business facilities (which is going to come in handy as the week progresses).  There’s heaps and heaps of construction going on around here – footpaths being repaved, parts of the tube being renovated and some buildings appear to be being replaced, so the area doesn’t have its usual charm and instead seems a over busy space of too many people navigating too many obstacles to get anywhere.

Finally showered up and changed we head out to find a pub for a quick bite for dinner and found ourselves at the Jack Horner tucking into fish and chips and bangers and mash with a pint before coming back to the hotel and doing everything we could to stay awake until after 10pm.

Not a bad first day, all the plans executed, all the transfers achieved, nothing of any note experienced but we made it safe and sound.