We left Buenos Aires this morning – early. Too bloody early. Our flight wasn’t until 0920 and even though it was a domestic flight, we have been advised to get to the airport two hours beforehand – like you would for an international flight, on top of which it was going to take up to an hour to get to the airport… So our transfer was booked for 0630 with Jorge… Jorge was recommended to us by Ceri as a reliable driver with a vehicle large enough to take the four of us and our four largish suitcases. So yeah, we were up stupid early after being up drinking until 0130 or so. Clever, huh?

We made it to the airport in plenty of time – Jorge sped us safely through the early morning traffic while we watched the most startling pink sunrise come up over the shanty town areas of Buenos Aires. Again with the speed landscape photography, only the blurred mess I shot out the window of Jorge’s flying Mercedes minivan matched my foggy mental state perfectly on this occasion. 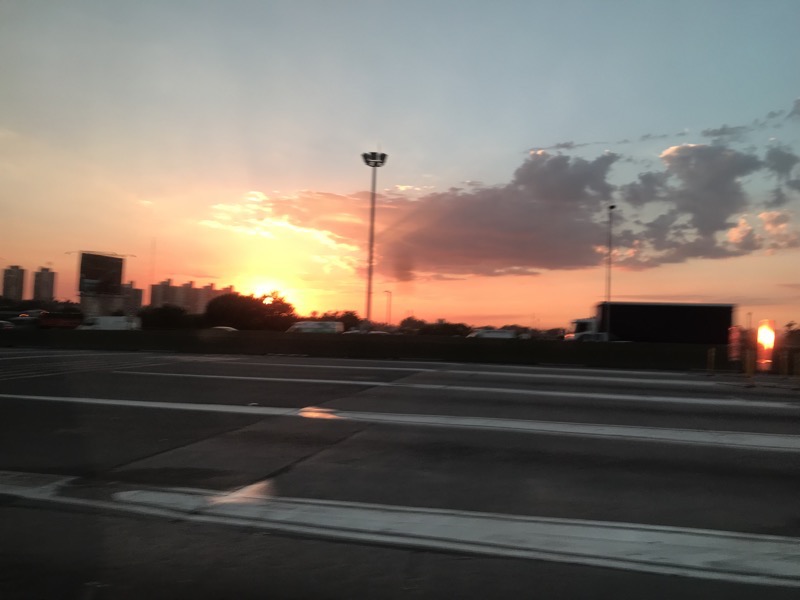 Have I ever mentioned how much I dislike ‘slum tourism’? By that I mean tours that take obviously financially comfortable/wealthy tourists into the favelas or shanty towns (which our tour yesterday did briefly) so they can gawk at how the people are living in poverty? I hate that shit. I can’t imagine how it would feel to be living in a run-down shack with a piece of corrugated tin for a roof and watch a $300,000+ bus roll through your neighbourhood with 50 or more wide-eyed, Sketcher wearing, fanny-pack wielding, (largely white) tourists staring at you from behind UV tinted windows. Fuck that. These people are living their lives and doing their best to get by – it’s not a spectacle, it’s survival.   🙁

But I’m off topic – we flew from Buenos Aires to Ushuaia with Aerolingus Argentina, a local airline who, unbeknownst to us had a 15kg luggage limit. Great, my bag with all its bulky warm stuff in it was nearly 20kg when we left home – the heaviest my suitcase has ever been when leaving the country (it’s routinely over 20kgs on the way home but never over about 16kgs when I leave). I got it down to 18.5kg but I still got slugged with a 590ARS (about $40) excess luggage fee anyway.  (*Ed: I just met a woman named Shirley at dinner who flew with the same provider and her baggage was 6kgs over but her husband’s was right on 15kgs and she didn’t get charged. I was the only one of the four of us who was over, but I got charged. Bastards!). Any-hoo… in for a penny in for a pound, I say. So if I’m going to get slugged on the way home, I may as well go the full hog and head home with 25kgs – they’re just going to hit me with the fee anyway!

We also had a ‘hidden stopover’ on our flight – which meant we made a scheduled stop somewhere to refuel and to dump some passengers and pick up a few extras, only 95% of us just stayed in our seat during this roughly 45min process. I still have no idea where we were stopped, as most of the in-cabin announcements were in Spanish and English versions were so thickly accented I couldn’t understand them anyway.   So a hidden stop-over and then onto Ushuaia.

Ed:  I did find out from Jorge where this ‘hidden stop’ was – a place called, El Calafate in Patagonia which is famous for its Peiro Moreno Glacier which, just a week after we were there, had an enormous ice bridge calving…

Anyway, we arrived in Ushuaia and the first thing that happened was Aunty Mary left her backpack on the plane thinking one of us had grabbed it for her – which of course we didn’t as we had our hands full with overweight hand luggage that was supposedly keeping our checked bag weight down. So she had to go back to try on to the plane to try to find it – the staff had apparently moved it on her, but thankfully she managed to reclaim it.  I was so relieved the missing backpack didn’t become a ‘thing’. 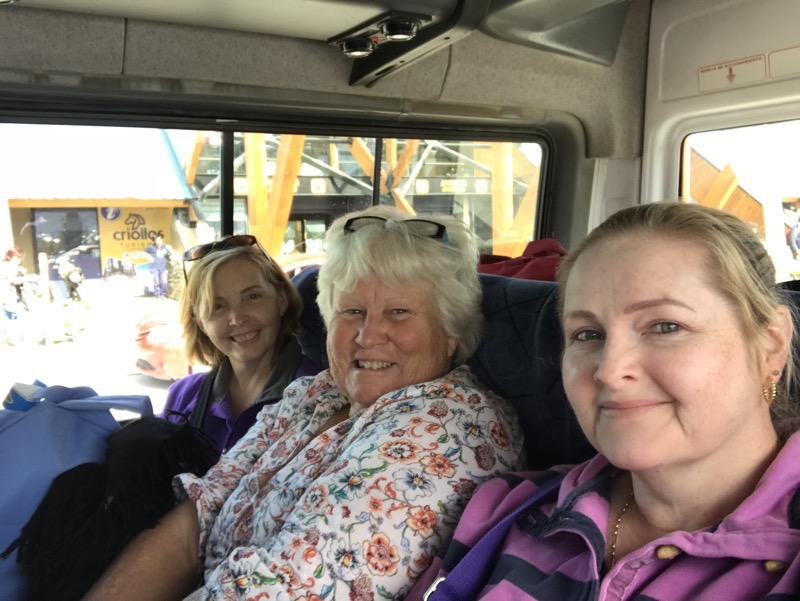 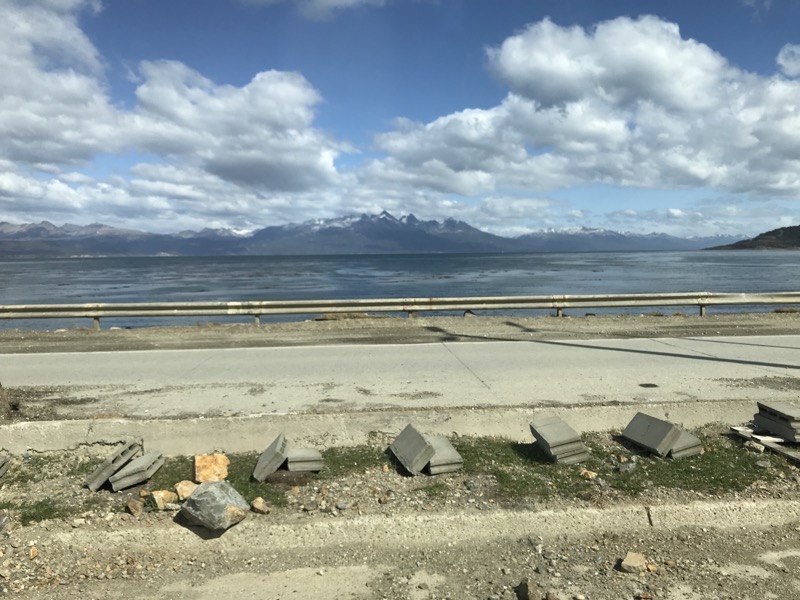 On the drive from the airport into town… I’m back in Ushuaia!  Unbelievable.

We exited the airport (funky building it is too) where we were greeted by Quark Expedition staff, they helped us with our luggage and transferred us to our hotel… only it turned out they were transferring us to our hotels – plural.

For some reason, Aunty Mary and Lyn were staying at a different hotel, we had no idea why because neither of them had brought paper copies of their booking with them, and they were (initially) none too pleased. Then Aunty Mary went around the back of the van to get her suitcase and it just wasn’t there either – whereupon a small panic ensued before it turned out they had already offloaded her bag while she was trying to ascertain why she was at a different hotel…   A misplaced backpack and now a misplaced suitcase = not fun.  Did I mention that we were all really rather tired?!  :/

The view at their hotel apparently ameliorated the inconvenience of being in a hotel somewhat out of town it seems… and we received this pic fron them shortly after they checked in.

Trish and I were ferried to a different hotel, the Canal Beagle, right in downtown Ushuaia which was decidedly older and less flash and had a view much more like this – complete with construction, smashed windows, stray dogs and all good things. 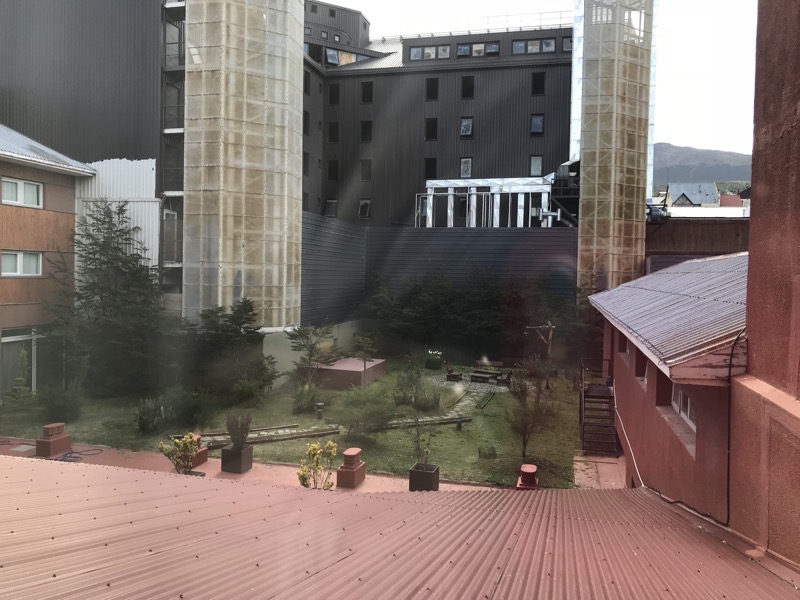 Didn’t matter we were only going to be there for one night.

At 1830 we had a Quark Expeditions briefing where we found out that we wouldn’t actually be embarking until 1600 the following day. So this pick up day in Ushuaia was officially Day 1 of our trip, and we thought we were embarking first thing the following morning, but not so – we just had to have all our luggage at reception by 1000 so it could be transferred to the ship but we wouldn’t actually be embarking until 1600.

Which meant we had zero plans for an unexpected day in Ushuaia. Lyn and Aunty Mary decided they would book a helicopter tour over the area, and Trish and I decided to go to the Tierra del Fuego National Park – I went there on my last trip and it was positively spectacular, so I was happy to journey into the park again. I figured I would decide in the morning if I wanted to do the prisoner train again, but at least we roughly had a plan.

Next things next.  Dinner.  I found us a choice of two restaurants after a bit of Googling – the Restaurant Villaggio for seafood and Italian style dishes, or the Estancia Parilla for Argentinian BBQ. Well, we thought nothing was going to top our Desnivel steaks from the night before so we opted to go to Villaggio. Chosen for the enormous king crab options on the menu – not disappointed! 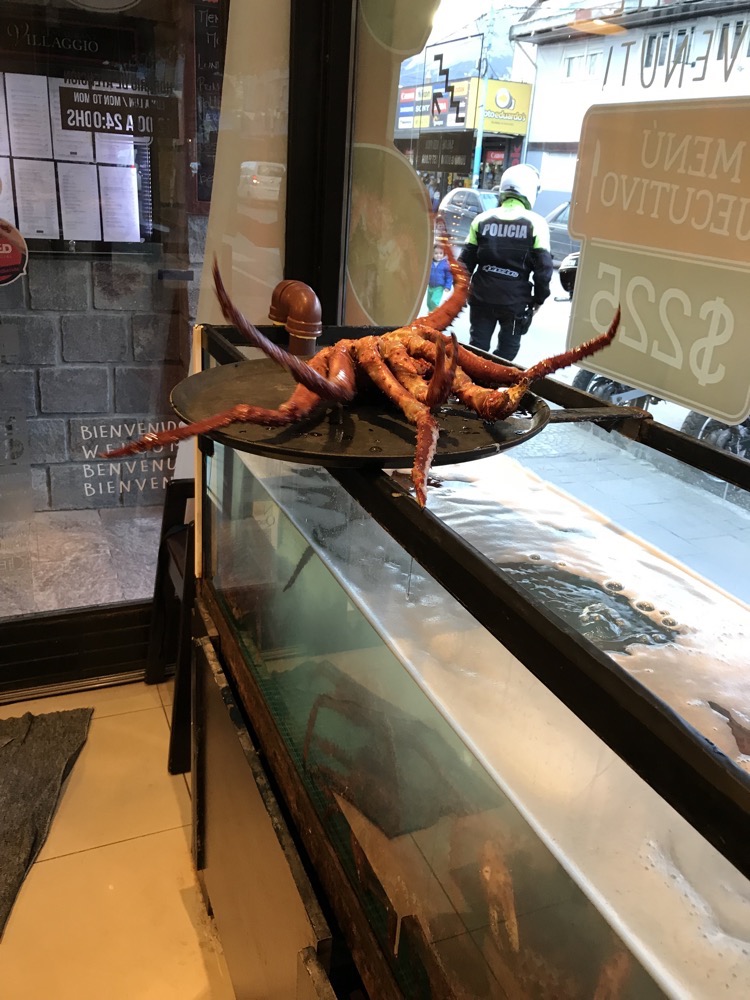 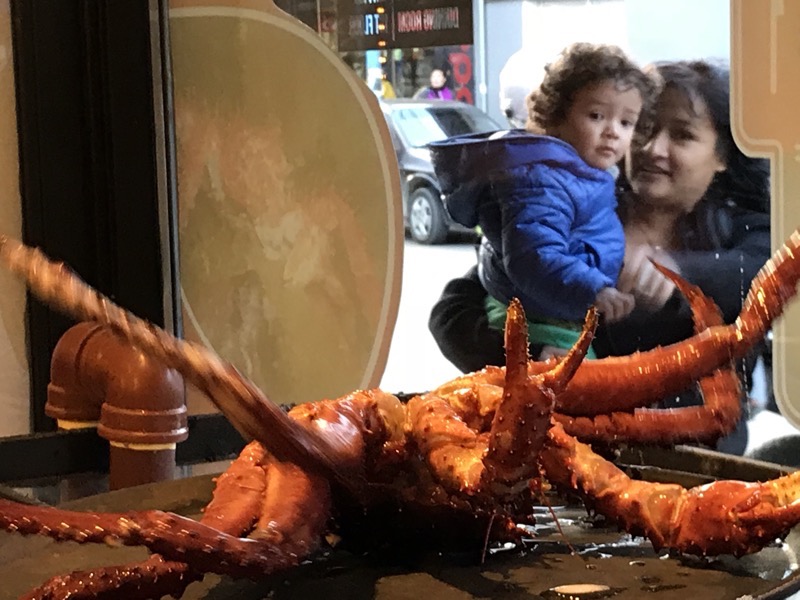 It was a lovely restaurant with delicious foods – we had a beautiful meal and then headed back to our hotel/s.  King Crab Casserole with Roquefort cheese, Grilled Atlantic Salmon and fries, Tenderloin Steak (fillet) with Potatoes au Gratin and that whole crab platter photo was snapped at a nearby table.  🙂

After dinner, we went for a quick wander through town back towards our hotel, but of course, most places were closed for the evening so we will have to double back and explore more tomorrow. 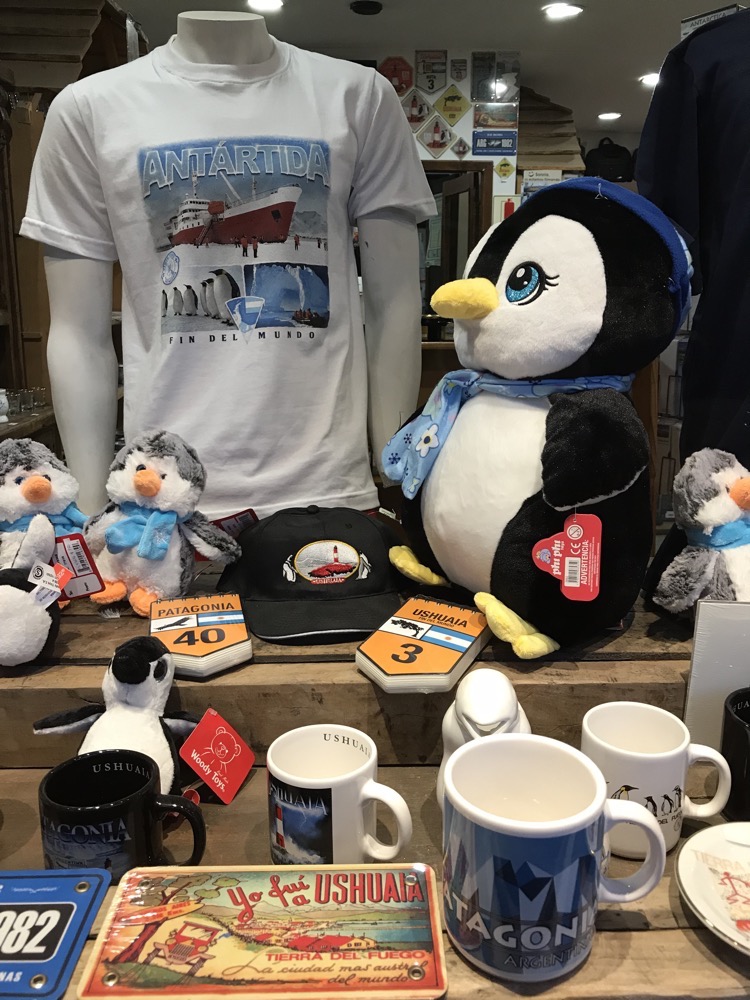 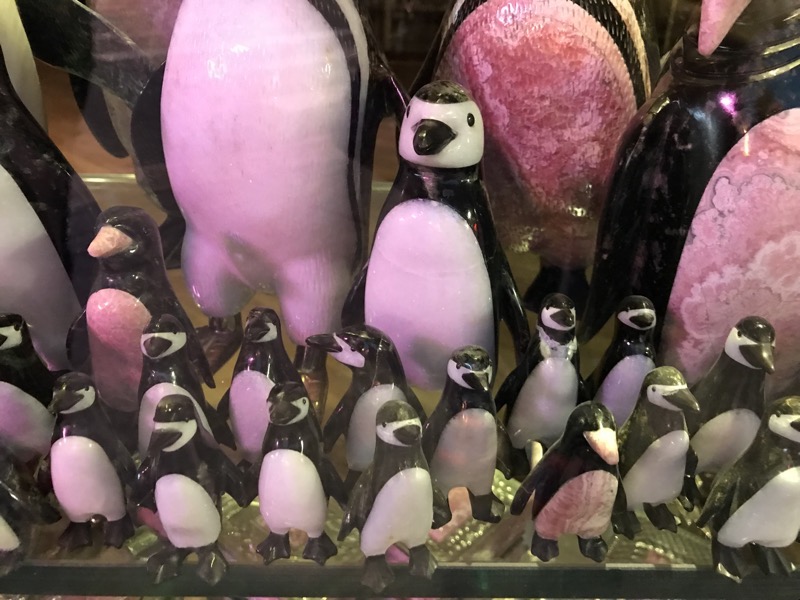 Gifts made from Rhodocrosite also known as Rosa del Inca or Inca Rose stone.  It is the national stone of Argentina and is particualrly stunning for it’s beautfiul red and pink hues. 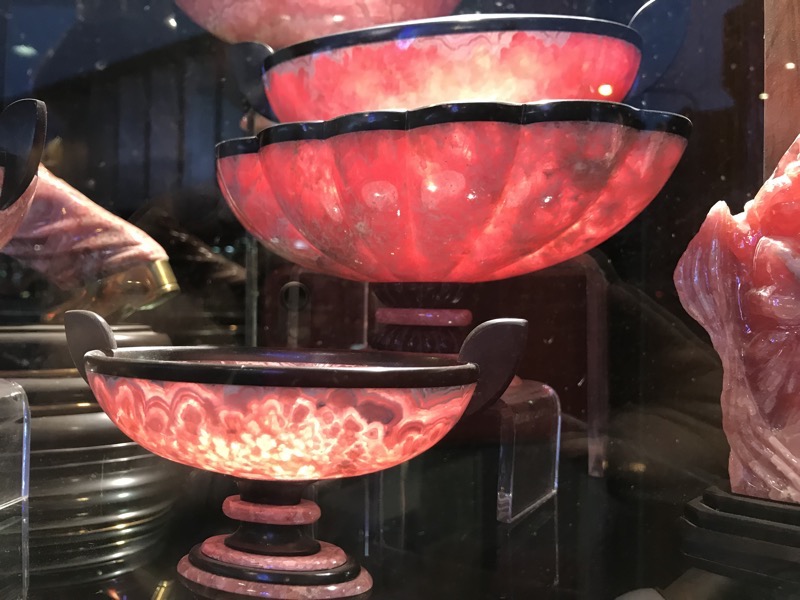 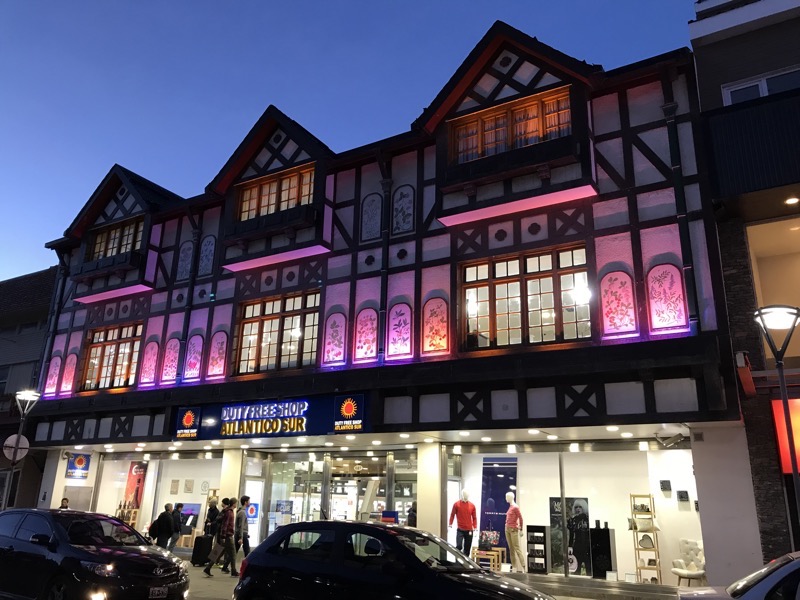 And thus endeth our uneventful transit day… all things being relative.