What sort of crazy arse people offer a free gun with purchase?  I guess the rest of we should take solace in the fact that the dealer appears to be taking the sensible measure of ensuring that the relevant background checks are being carried out before handing over free handguns to lord only knows who.   What’s next?  Collect ten pizza tokens for free hand grenades?

A car dealership in the United States is offering a free handgun with every vehicle sold.

Max Motors in Butler, Missouri, says sales have quadrupled since the start of the offer. Customers can choose between a gun or a $250 (£125) gas card, but most so far have chosen the gun. Owner Mark Muller said: “We’re just damn glad to live in a free country where you can have a gun if you want to.”   The dealership sells new and old vehicles, including General Motors and Ford cars and trucks, and its logo shows a cowboy holding a pistol. It has sold more than 30 cars and trucks in the past three days, an increase which the owners put down to their promotional offer. 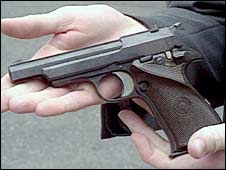 The offer is proving popular – sales have quadrupled so far

Mr Muller said that every buyer so far “except one guy from Canada and one old guy” chose the gun, rather than the gas card. He recommends a Kel-Tec .380 pistol, which he describes as “a nice little handgun that fits in your pocket”.   He added that the promotion was inspired by recent comments from one of the Democratic nominees for the presidential election, saying: “We did it because of Barack Obama.

“He said all those people in the Midwest, you’ve got to have compassion for them because they’re clinging to their guns and their Bibles. I found that quite offensive. We all go to church on Sunday and we all carry guns.”

The website advertisement for the offer, which continues until the end of the month, mentions that an approved background check on gun ownership is required.

Haven’t had much time to scribble in here of late.  Not because I’ve nothing to write about (cos lets face it there’s always something pissing me off)…. but I am having difficulty remembering what they hell I’ve been doing during the day by the time I sit down at the PC at night.

Short term memory thing is shot to shit.  I can not believe it is May… I want to know where Feb, March and April went?  🙁
.

Or at least they would if I substitute ‘pretzels’ for ‘drugs’ and ‘thirsty’ for ‘dopey’.  Because dopey I certainly am nowadays (is nowadays a ‘real’ word?  If it is.. it certainly seems like a lazy sort of stupid’ word.  Hmmm… Oh, yeah so it is – nowadays – adverb 1.at the present day; in these times – blargh so much for that.)   Ummm.. Mr K walked in and now I have forgotten what I was going to say.

But I do mind very much when I’m cooking curry for dinner and absent mindedly put 3 TABLESPOONS of curry paste into the curry instead of the 3 TEASPOONS that the label recommends.   😐 And other than that… what else have I done?  Memory failure again… happening far too much.

Think I went to the movies…. yep have just been reliably informed that I went to see Iron Man yesterday… all I remember is that it was interminably long and sitting still so long absolutely killed  my back and the guy had a cool suit or something like that. I had a dream (why did that just resonate through my head like Martin Luther King) last night or rather in the early hours this morning that was rather… unusual to say the least.

I was trying to scramble up a cargo net like you do on a confidence course, and I kept falling down.  Not because I couldn’t do it physically but rather because the ‘Aristocracy’ or the ‘Bureaucracy’ were at the top of the cargo net and they kept pulling my fingers off the net and stamping on my hands and pushing my head down to stop me climbing the damn cargo net.  And the reason they were trying to kick me off the cargo net?

I’m not 100% sure but I think it had something to do with global economics and impending global grain and food shortages.