After the trauma of dealing with the Parking Nazi yesterday, I decided I couldn’t face the world and called in sick.  Okay, in truth it had more to do with my stomach doing God awful things to me since I returned from the backwaters of Pakistan (read Quetta) than the Parking Nazi…. but I think I’d rather blame the NAPMDB  for my lack of motivation to overcome the flip-flopping, cramping stomach of doom and soldier on in tireless dedication to the job from which I have been operationally disengaged!

So what’s a girl to do while stuck at home feeling sick as the proverbial dog.  Why… chat on the MSN annoying your friends whose bosses are stupid enough to let them have IM access at work….update your resume and draft up some job applications now that I’ve been sacked for the first time ever….and try desperately not to buy any cool stuff on line!!!  (I want one!)  Cos shopping really helps when you’re not feeling well…. ask anyone!

So I spent a quiet day avoiding throwing my credit card at the Met gift shop (which I really shouldn’t do until I clean up the mess my holiday made on it), and hanging with Angel who spent most of his day demanding food (God that kid can put it away).  Equinom came over this evening to catch up and hang out.. .we haven’t seen each other for a couple of months, so after the pleasantries were exchanged, naturally the conversation turned to average international penis sizes and we found this interesting (but likely unreliable) survey graph, which I just had to put here for everyone’s edification….. 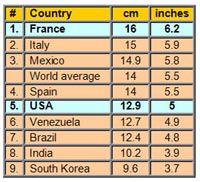 And that’s about it really… my day in a nutshell.