“I find the greatest thing in this world is not so much where we stand, as is which direction we are moving. To reach the port of heaven, we must sail sometimes with the wind and sometimes against it, but we must sail, and not drift, nor lie at anchor.” ~ Oliver Wendell Holmes

The fantastic movement of the ship meant I slept in until 0730. What a simple pleasure after being on someone else’s schedule for the last couple of weeks. We had some respectably rough seas overnight causing the ship to rock and roll a bit and it was awesome. I love it when it gets a bit rough 😉 so I slept like a dead thing and if it weren’t for the fact that I’m still having trouble breathing from this flu, I might even have been able to say I felt ‘rested’ for the first time in years. I need a bed that moves like this at home; keeping your body moving all night and no particular pressure on any one point on your spine.

For a change, we went down to breakfast to get some tea and a bit of Vegemite on toast… (yes, second last day and I found out they had Vegemite on the ship) whereupon we ran into a young American couple wearing seasickness wristbands who claimed they hadn’t slept at all because the weather was so rough and their cupboard doors and coat hangers in the closet had been clattering about all night, and they did not like the motion of the ship at all. I think perhaps that they might not have travelled by ship before or they would have taken the coat hangers out of the closet and put them on the floor or in a drawer, or tied them together with a bathrobe belt. Before we went to bed last night, I had taken nearly everything off the desk and secured stuff in drawers, bound the coathangers in the closet together with thick rubber bands, that I always bring on ships for this purpose, and basically secured anything that could slide around. We have two heavy chairs in our room, which they could have been placed in front of cupboard doors that wouldn’t stay closed, but apparently, they were trying to just line up their Muck Boots in front of the closet…? You live and learn I guess.

The program for the day consisted of a few lectures – “Life of Plastic’ with Liliana the ornithologist on board. She is currently working on a project where she is collecting plastics from every single zodiac cruise she goes on. She has a 1m wide net that she drags behind her zodiac and it sieves the water for plastic particles which are then funneled into a tiny collection bottle at the end of the net. These are then sent back to a university she is working with to study the presence of micro-plastics (beads and plastic fibres) in Antarctica. She was telling us about a story of a shipping container that had 90,000 plastic rubber ducks that fell off a Chinese cargo ship 17 years ago, and how these had been washing up all over the world. Ocean plastic is not becoming a huge problem, it already is a HUGE problem – there is now an estimated 80,000 tonnes of plastic floating in the Pacific Garbage Patch. 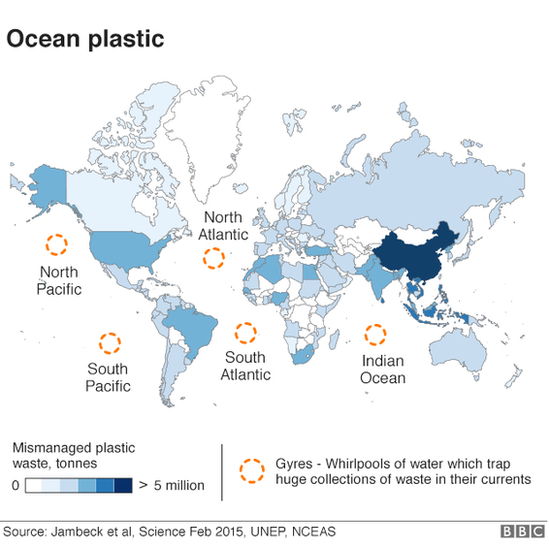 She also talked about an Albatross colony in North America where all the baby chicks were inexplicably dying, confusing scientists and creating a terrible smell of rotting chicks in the colony. Scientists removed the dying chicks and lay them out away from the colony to decompose. After a few weeks, they returned to find that most of the chicks had their little guts full of plastic – plastic bottle tops, plastic pen lids, even a plastic toothbrush. The chicks, with their guts full of plastic, were unable to fit enough real food into their little tummies and they effectively started – and the poor unwitting parent birds were bringing them back more and more plastic contaminated food. 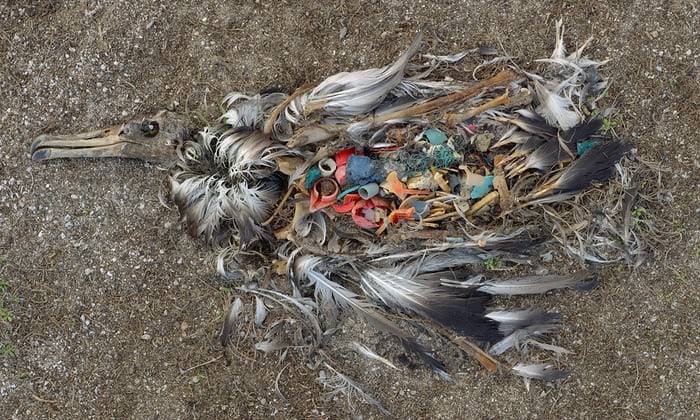 This is happening throughout the marine food chain from seabirds and fish, to seals, dolphins, sharks and whales… all of them have masses amounts of plastic in their guts. Microplastics are just as bad and even harder to eliminate.  Did you know that a single washing of a polyester polar fleece jumper/jacket can put up to 19,000 microplastic fibres into the waterways? They are too tiny to be filtered by any water treatment plant and will end up straight in the oceans.  The biggest culprits are plastic drink bottles, single-use plastic straws, styrofoam cups, and plastic bags.  We all have to work harder to keep this shit out of our ecosystems.  :/

Later there was another presentation on “The Antarctic Food Web” which focused on what is feeding on what in the Antarctic environment – a lot of which boils down to ‘everything eats krill’ – poor krill – then the higher order animals eat the krill-eating animals.  🙂 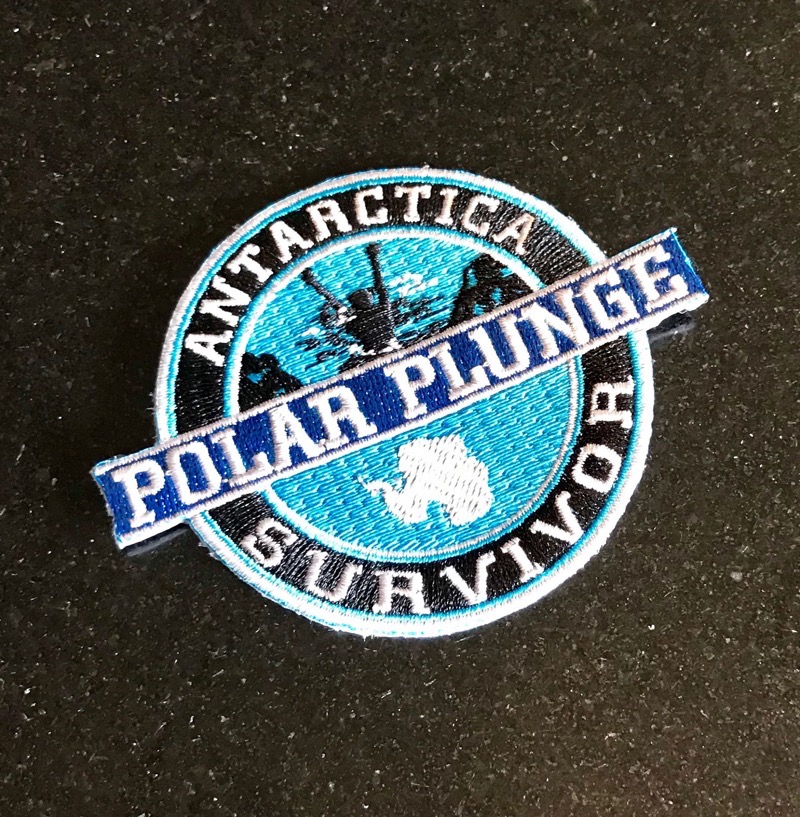 After our lectures, we returned to our room to find a certificate for us saying that we had completed an Antarctic voyage below the Antarctic Circle. Approximately 35,000 people each year travel to Antarctic but barely any travel below the Circle. For example, this was only one of two Quark Expeditions to go below the Circle this season – and they have been running two-week trips on this ship from last November to March. Most Antarctic voyages spend a fair bit of time in the South Shetland Islands or the South Georgia Islands or even going as far north as the Falklands before heading briefly towards the tip of the Peninsula. So it’s quite rare for tourists to come as far as 68° south. We were also presented with a sew-on cloth patch commemorating our Polar Plunge!

This afternoon there were some more presentations – a screening of Jacque Cousteau’s, ‘Voyage to the Edge of the World’ which showed some very old school irresponsible ecotourism practices from the world famous oceanographer, including doing dangerous stuff like climbing through tunnels in icebergs that could roll?! ☺

As well as another history lecture – “From British Imperial Expeditions to International Polar Science’ which was talking about the geopolitical status of Antarctica over the years.

Before we knew it, it was time for the evening recap where we got a weather update from Woody – we were making good time across the Drake Passage, and the South American storm cell that had been of considerable concern had fortuitously moved off to the west while the other storm cell was losing steam, so it looked like we were going to be lucky and not get caught up in either. So much so that the Captain has set course to take us to sail around Cape Horn in the morning, if we can get permission from the Chilean government to approach – ordinarily you are required to keep 12 nautical miles clear of the Horn, but if we get permission to enter their waters, we may get up to 3 miles off the Horn. Aunty Mary, Lyn and myself sailed around the Horn on the Sea Princess last year – twice even, as our at the time, Captain Genaro Arma was so excited to be finally (after over 20 years at sea) be able to be sailing around the Horn for the first time, that he turned the ship around and circled it clockwise and counter-clockwise. It’s kinda cool and not a little bit crazy that we are going to get to sail around the Horn for a third time considering none of us works at sea. 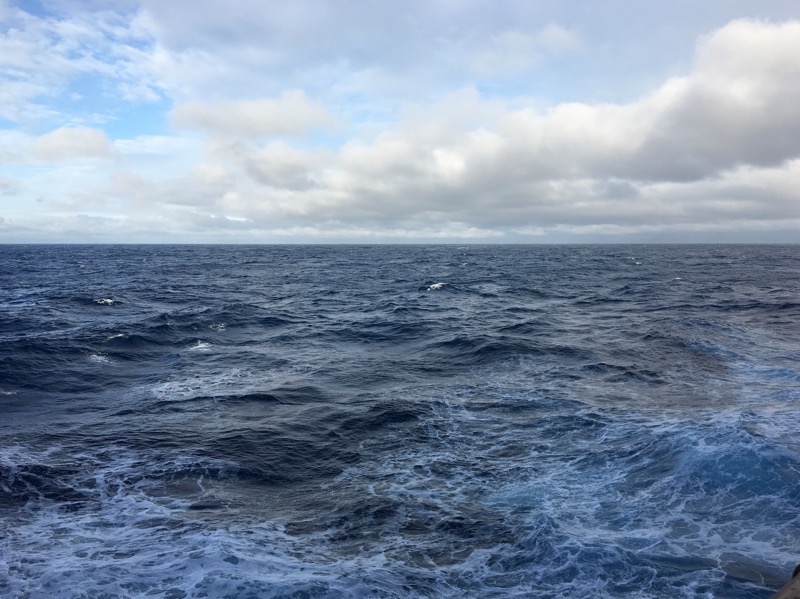 Scotty was busy out on decks photographing seabirds still, and overall we had a lovely quite day at sea. 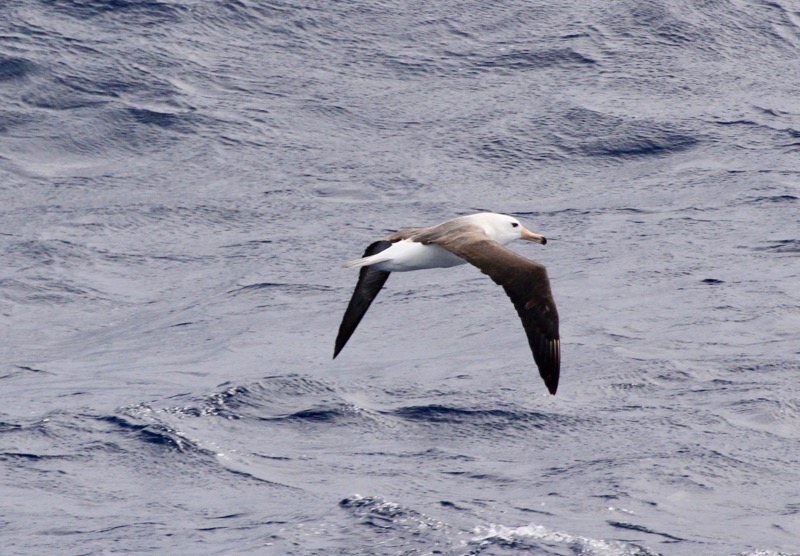 After the recap, we had a Toast to Antarctica in the Main Lounge with the Captain and a Charity Auction in Support of an organization called Penguin Watch. Penguin Watch counts the numbers of breeding pairs of penguins in the Southern Antarctic Ocean and on the Peninsula. So we had our wonderful Expedition Team walking around filling us up with champagne while they auctioned off some wonderful and exclusive Antarctic souvenirs – including the Antarctica flag off the front of the ship, a charted map of our journey complemented by hand-drawn wildlife, a unique Antarctic Heritage woolen blanket and a backpack covered in Antarctica patches. (I didn’t have my camera on me, but Acacia shared some photos:) 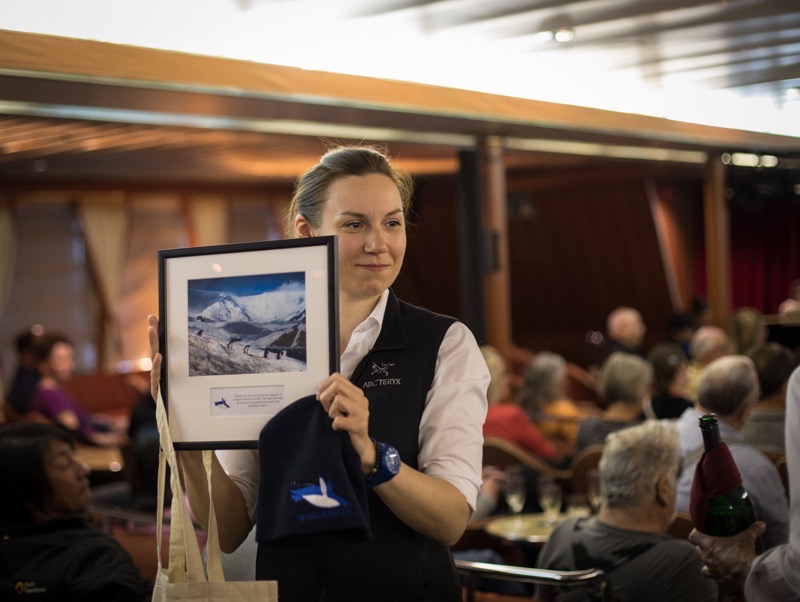 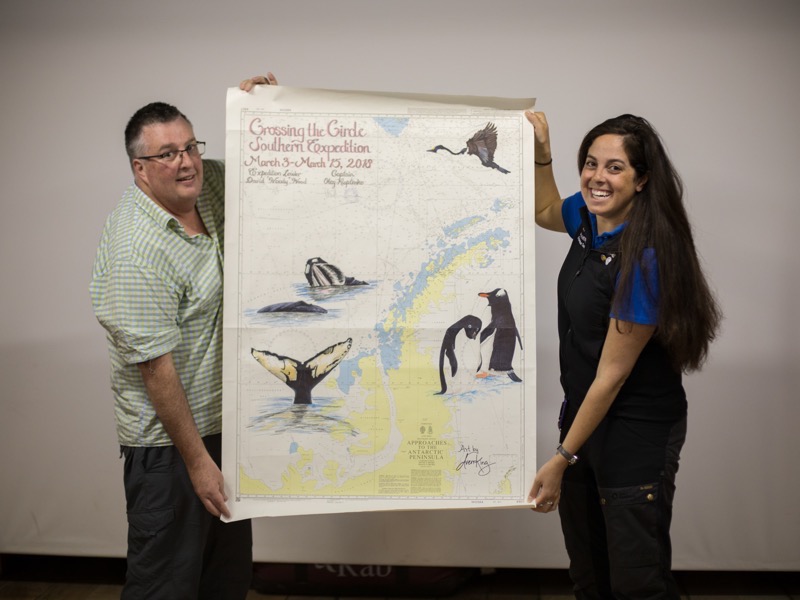 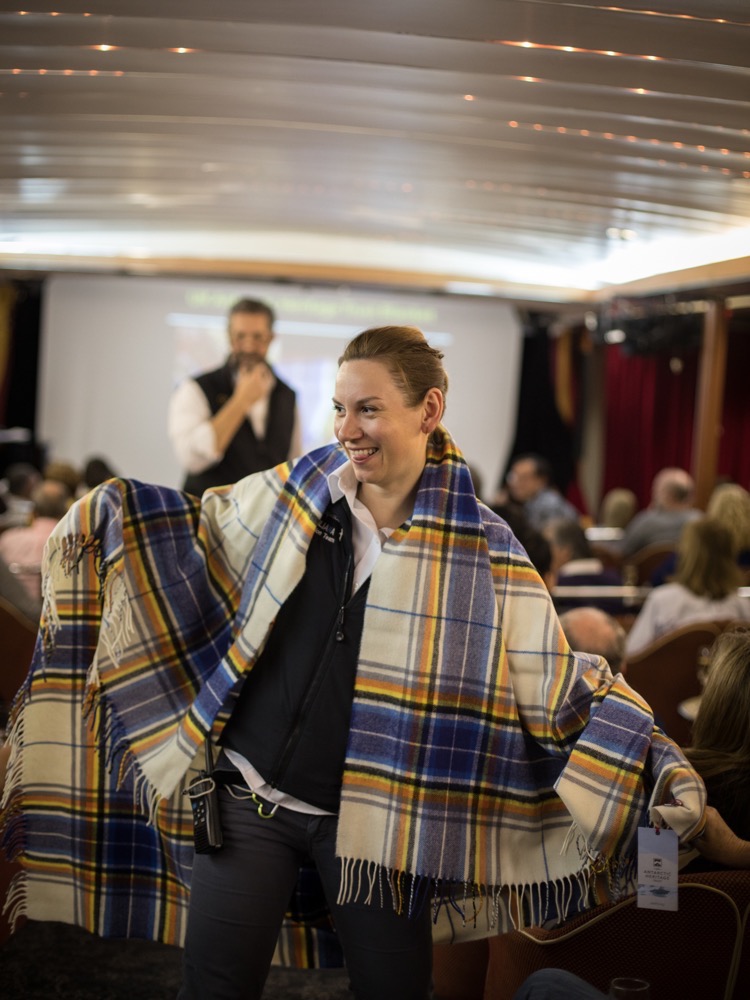 After this, it was time for dinner – and we had Ema our onboard microbiologist and her friend Rachel from Switzerland joining us for dinner. Ema and Rachel met on an Arctic trip last year and have kept in touch, so when Rachel decided that she wanted to visit the Antarctic, she found out which ship Ema would be on. Most every meal we have been sitting with lovely people from all over the world*. Travellers, every single one of them – people who have been to some amazing places, and are happy to share their tips and favourite sites, and people who have plans to visit even more amazing places.

Many of them want to visit Australia ‘one day’ but for a change, they seem to know that they can’t just come for two weeks and expect to be able to ‘see Australia’ – believe it or not this is quite unusual. Many people we have met in our travels, (particularly Americans… who, I know I am generalising, but I have to say have a dreadful grasp of geography in general) expect that they can come to Australia for a 10-14 day holiday and will think that they have ‘seen Australia’. I have spent collectively roughly 3 months in the US, and haven’t even scratched the surface.  The travellers on this trip all seem to have plans for a minimum of 6-8 weeks to come see Australia and are full of questions on where they should go as they feel it is such a big undertaking.

We had a wonderful dinner (ooh, I should find some photos of the farewell dinner…) and exchanged details with Ema – I do hope if she ever comes to Australia that she looks us up. 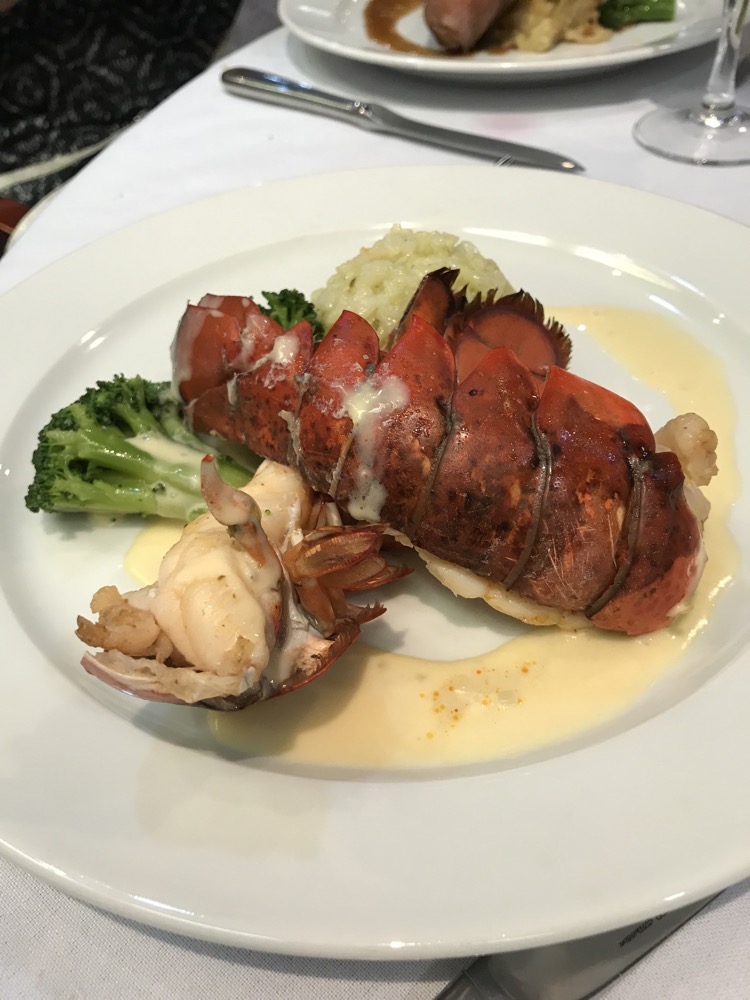 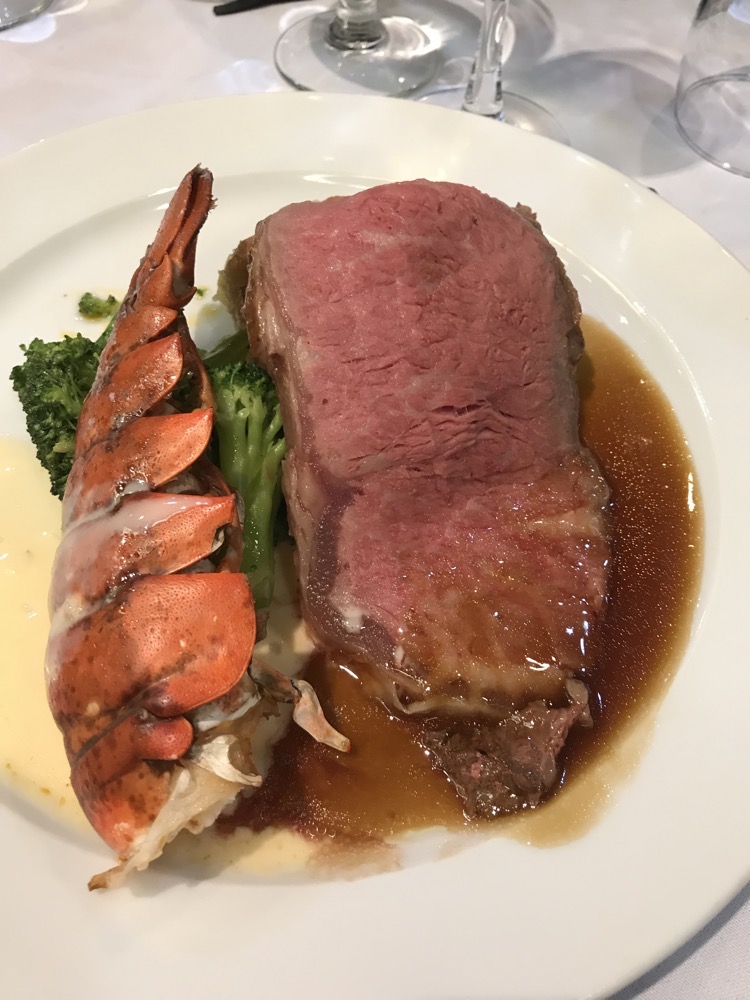 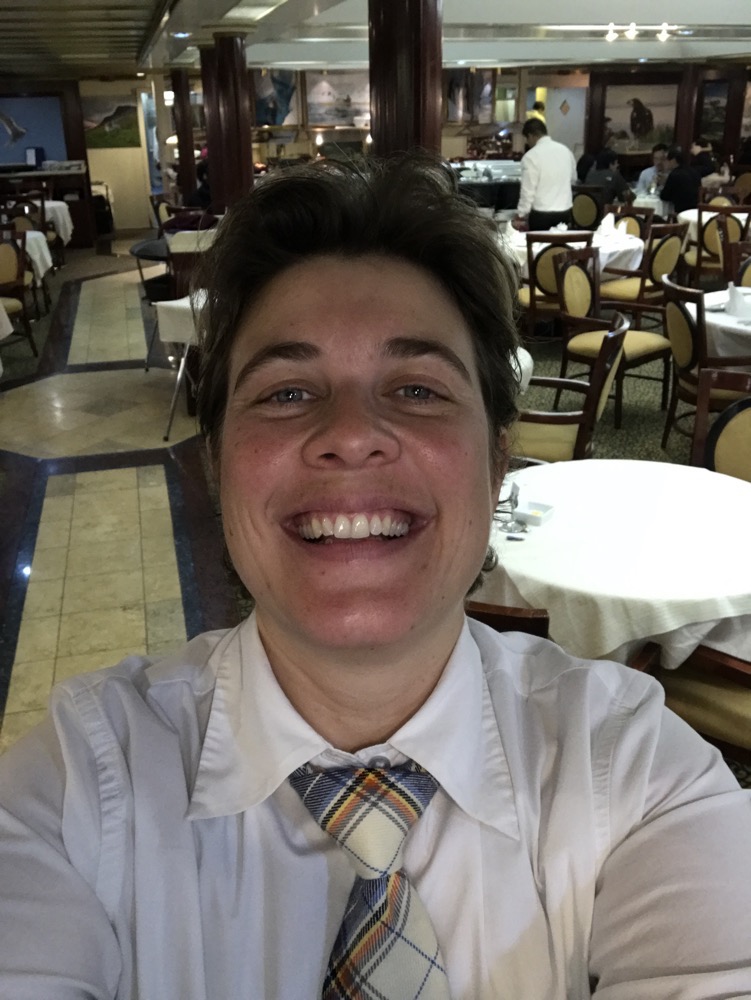 * a couple of exceptions – the very odd man from Sydney with the carb-on-carb-with-a-carb motif, full-sugar diet. And a particularly odious man from South Africa. This bloke, John, sits down at a table of women and started immediately telling us stories of how he always travels first class, and how his grandchildren keep telling him to buy a Ferrari so they can drive it and blah blah blah… If you can’t hear my eyes rolling at his bragging, well, let me insert them for you: *ROLLS EYES VERY LOUDLY*. He told us about flying Emirates (first class of course), and how the flight attendants were asking him when would he like to have his shower – there are showers in first class you know, and how he started asking the ‘little Indonesian hosties’ (Indonesian? Really? On an Emirates flight?) which one of them was going to come in and scrub his back because first class should come with someone to scrub his back… I wanted to tell him that sexually harassing airline staff in their workplace was hideously inappropriate, but he was such a dinosaur it didn’t seem worth the effort. He too, also only went ashore on the first day and has now ‘seen Antarctica’!  Perhaps the two of them spent the entire trip hanging out together at the Club Bar!  The second time we had the misfortune to have him join our table he told us that his roommate was busy packing and that ‘he’d make someone a good wife one day’… to which, yet again, a table of five women, collectively sighed.  Am thinking about avoiding the entire country of South Africa to make sure I never run into him either.  😛