“A sense of the future is that the present generation is morally responsible to future generations.”

Woke up – still have the lurgy – but after another decent nights sleep thanks to the rocking of the ship, not feeling too bad.  Today we had another light schedule to look forward to and then the saddest bit of any trip, the packing that signalled the end of our adventure. *sniff sniff*  I can’t believe our trip is coming to an end so soon.

We had a light breakfast and then a mid-morning presentation called “Looking North”, that I had really been looking forward.  The Expedition Staff were going to tell us all about their northern hemisphere summer jobs – most of them work the other half of the year in the Arctic!  We had already heard tales from some of the staff over dinner, or just while chatting when hanging out around the ship or on shore; this morning’s presentation was effectively a ‘Where else can Quark take you?’ which told through the experiences of their expedition staff.

Franny:  “Well, golly gosh we are nearly at the end of our trip friends and no doubt you are feeling sad about having to leave Antarctica and our beautiful Ocean Diamond.  Well, friends, fret not! We have the Expedition Team in the Main Lounge with a presentation of exciting Arctic adventures!”  We are going to miss Franny and her “golly goshes” and her “fret nots”.  🙂

Woody our Expedition Leader was up first, he works out of Svalbard, Spitsbergen, Greenland and Iceland, taking people on trips deep into the Arctic region searching for polar bears and walruses and other crazy wildlife.  He also spoke about how unexpectedly green and flush with wildflowers some of these areas can be.  These voyages start in the very north of Norway and then go further north from there.  I didn’t have any of the materials they showed us in their presentations, they were mostly personal photos and such, but I found some content on the Quark website, and Woody is in this promotional video I found basically explaining what a typical day is like on a trip like this in the Arctic.

Next to speak was Naomi, and she spends her northern hemisphere summer working in the high Canadian Arctic.  These trips are often photography land stays where visitors can explore the high tundra regions looking for musk ox, polar bears, arctic fox, beluga whales and other unusual wildlife. Visitors get to explore in Unimogs (all-terrain vehicles) or go hiking as you choose to get in amongst the ‘Badlands’.  These trips start from Yellowknife in northern Canada and then go to a static camp called the Arctic Wilderness Lodge.  It looks very remote and very interesting as well.

But the presentation I was really looking forward to was Pato’s.  He had mentioned to us over dinner, how he was working next season on the ’50 Years of Victory’ – the Russian nuclear-powered icebreaker that Quark does expeditions to the North Pole on… and when they get there, his main job is taking people on hot-air balloon flights.  This trip looks simply amazing… I mean who would even think that hot-air ballooning at the North Pole should be a thing?!   The expeditions start from Helsinki where you then fly to Murmansk in northern Russia to board the icebreaker and head to 90° north.  Pato said being on the icebreaker is like ‘living through a mild earthquake for a week or so’.  Sounds like a truly unique journey.

We left the ‘Where to next?’ presentation feeling inspired… with so many travellers on this ship having a wide variety of interests and experiences, we had already gathered a huge list of cool places to add to our respective ‘Bucket Lists’ – but now that the expedition team has shared some of their favourite polar expedition experiences in the north, we have even more places we would love to see.

Just after the presentation, we had an announcement on the PA that we were coming up on Cape Horn.  The weather was a bit overcast but we had been given permission by the Chilean government to approach the Horn. It looks pretty much how I remembered it from last year… a remote little rocky island with a solitary statue/monument of an albatross on it.  Only last year we had bluer skies and nicer weather. 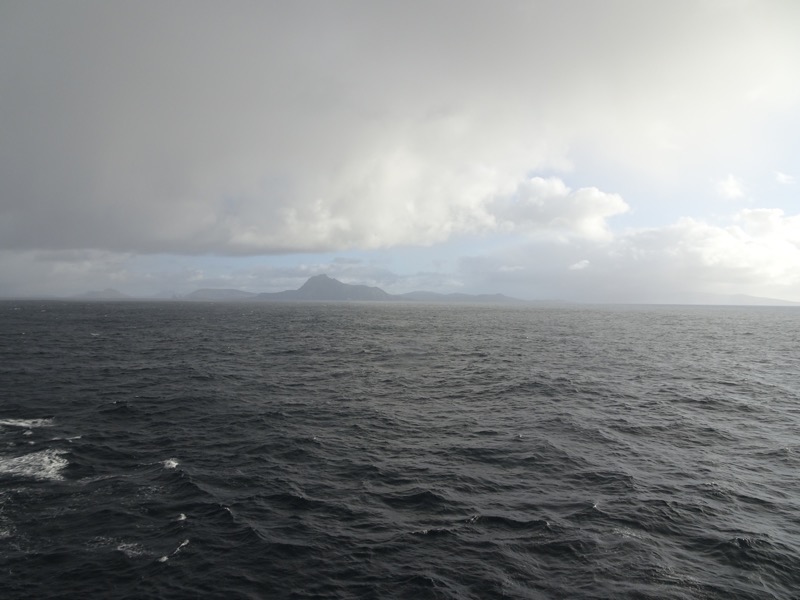 It was raining and most of the rain was definitely frozen… 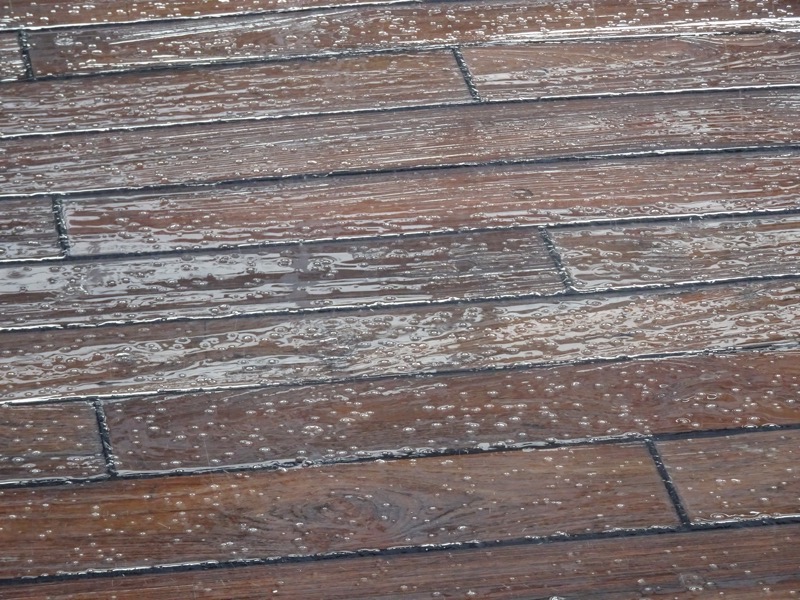 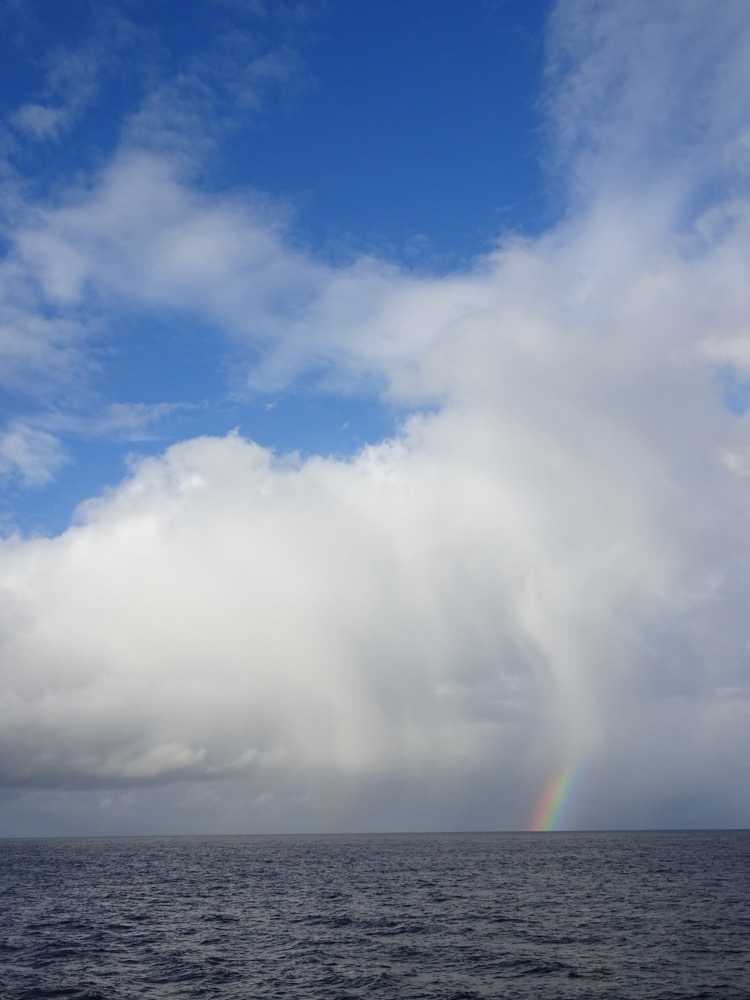 We did see a remarkable ocean to ocean rainbow though – that was very cool and I haven’t seen that phenomenon before. 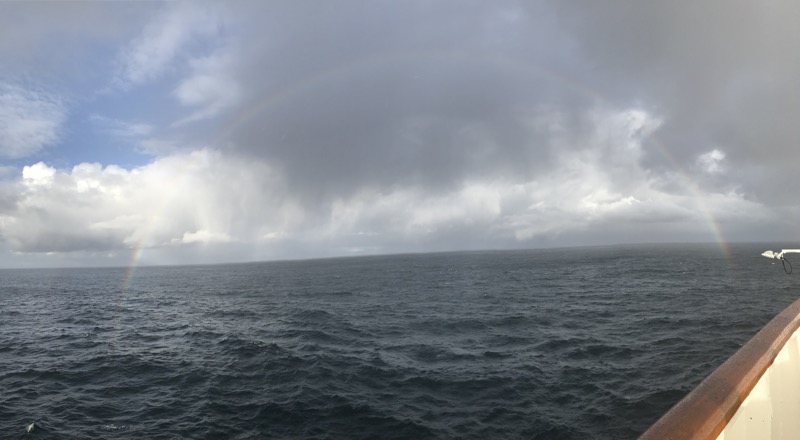 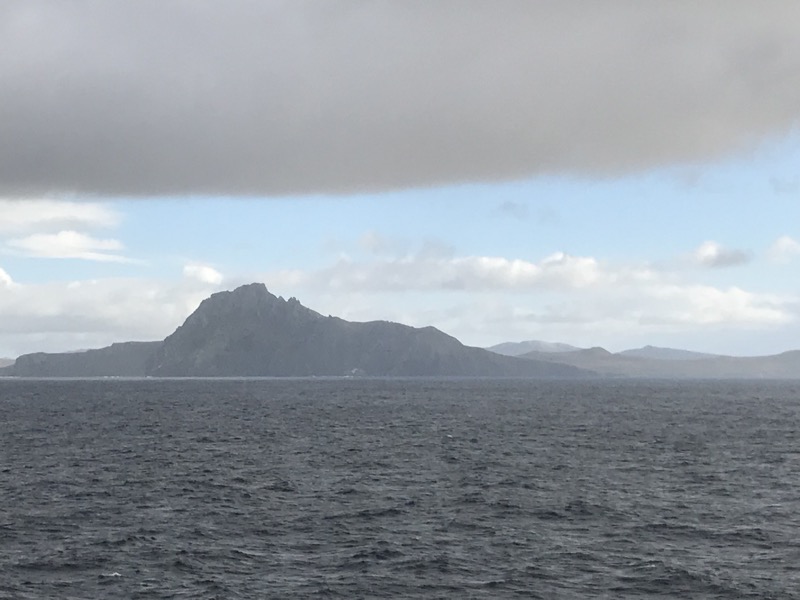 Back to moody, ‘romantic’ weather! 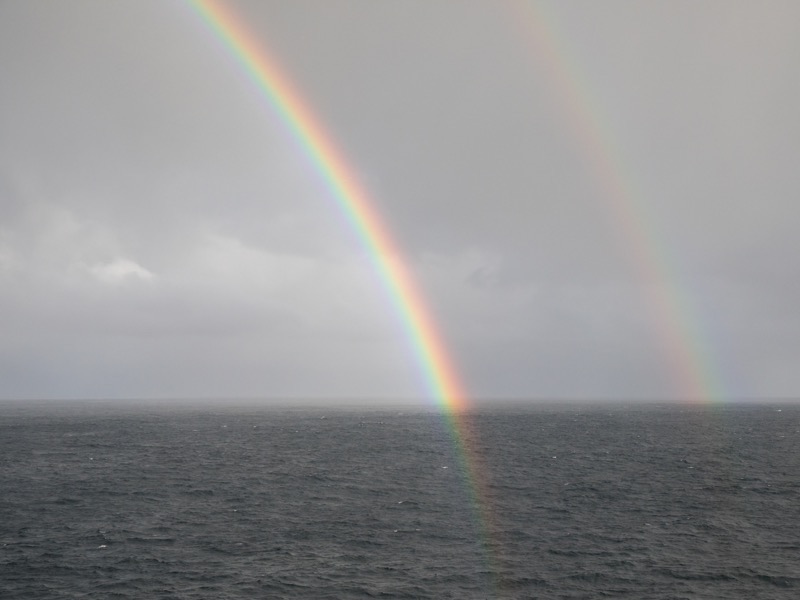 After this, we had a bit of lunch and then there was a ‘Global Warming and Climate Change’ lecture with Norm, the geologist.  I chose not to attend the climate change lecture in favour of getting a headstart on my packing.  By all accounts later, it was as doomy and as gloomy as I would have anticipated and all I can say when I think about the polar regions melting and sea levels rising is – what are we going to do about Venice?  Build a bio-dome over it and only visit it by submarine?  The environment is going to hell in a corporate handbasket of greed, and globally our governments – all of them – are not doing enough to halt the destruction.  It’s sad, and it’s depressing and it’s going to be a mess our children end up having to clean up.

After Norm’s lecture, we got to hand back our delightful clown shoes and PFDs (Personal Floatation Devices).  Goodbye clown shoes – I won’t miss you even though I will miss the amazing places we went together. 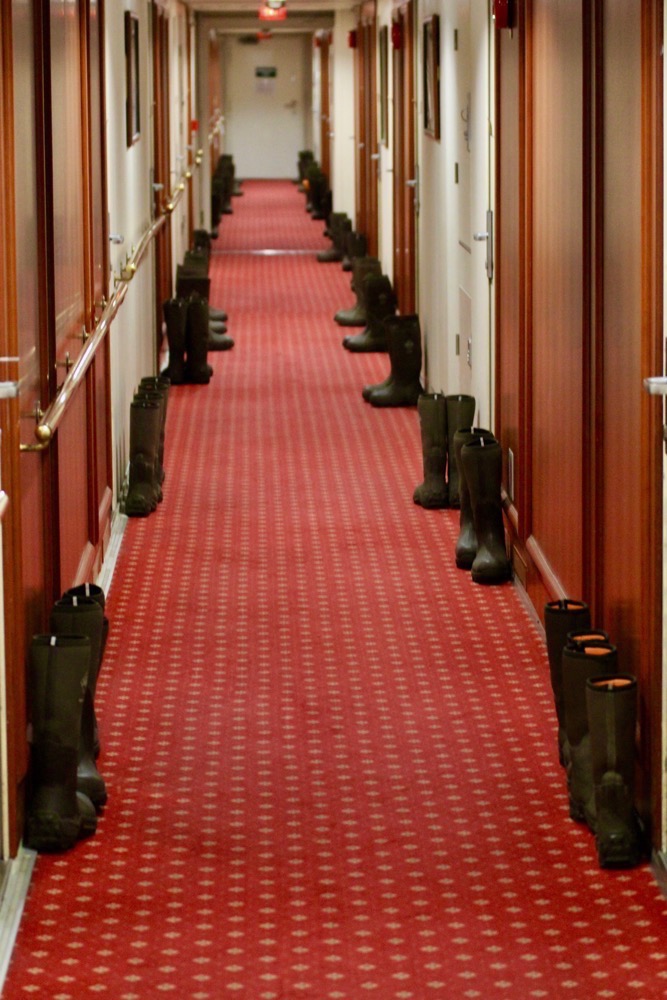 Then we had a disembarkation briefing which was basically to let us know what to expect in the morning and that people who had booked to fly home the same morning that the ship was due to return to Ushuaia were to mark their luggage differently and were to disembark first so they could go by bus directly from the ship to the airport to make their flights.  We met people who had flights booked to leave Ushuaia at 10am, which I have to admit just had me baffled.  Travel by ship is oftentimes unpredictable, so booking a flight home barely two hours after your scheduled disembarkation seem to me, to be almost inviting trouble… What if we had bad weather and were held up?  What if we had technical problems and ended up completely off schedule?  It happens all the time with sea travel, so I’m not sure why people would court disaster by allowing themselves so little time to make connections.  *shrug*  With people from all over the world on the ship – many of us had long transits ahead to get home.  I’d say the average transit home was ranging in the 24 to 30-hour bracket.  A LOT of people were finding themselves in the same situation as us, a 3 hour flight from Ushuaia, followed by an annoying 8-10 hour layover in Buenos Aires, followed by long-haul flights.  Yuk.

After this, we had our Final Expedition Recap, on the way to which I went out on decks and could see land – it was probably Chile that I could see, but it meant that we weren’t far off from heading into the Beagle Channel, and from there only hours to Ushuaia. The whole Expedition Team were at the Recap to briefly talk about how their area of the expedition went. Woody had been updating the laminated maps that were kept near Reception, but he put up a more detailed map now that gave a better idea of where we went. 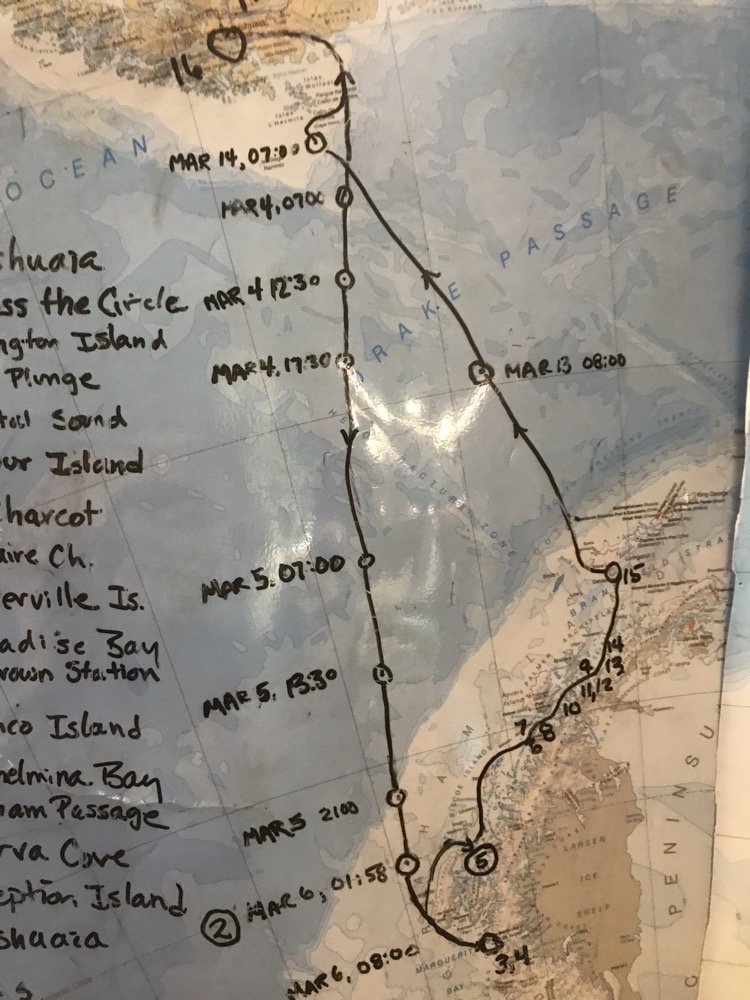 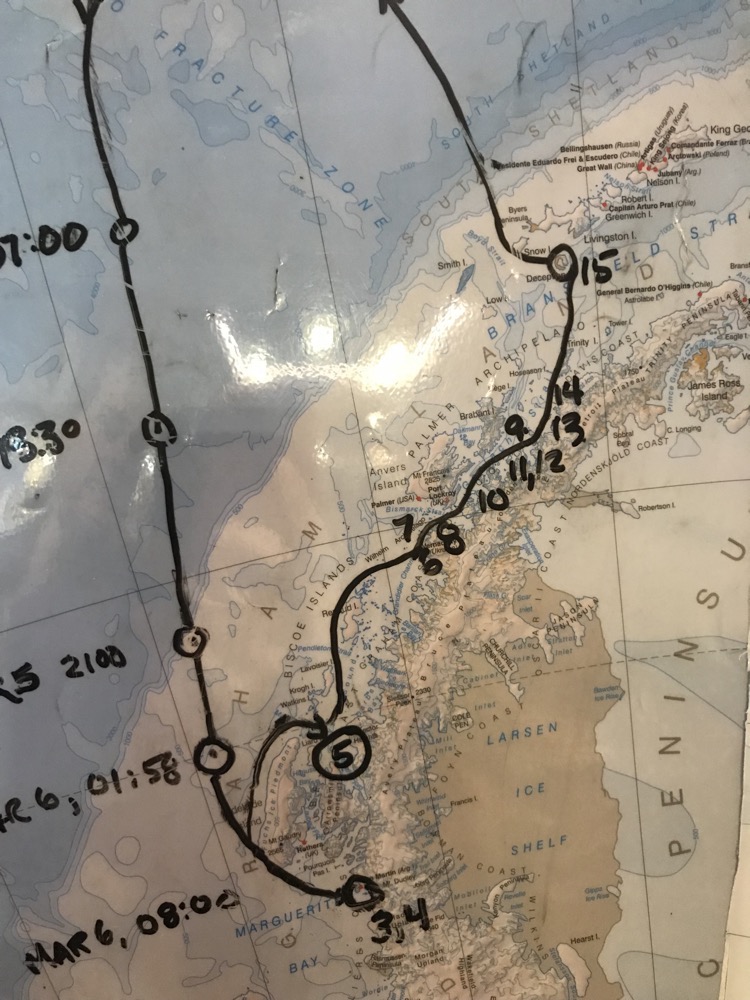 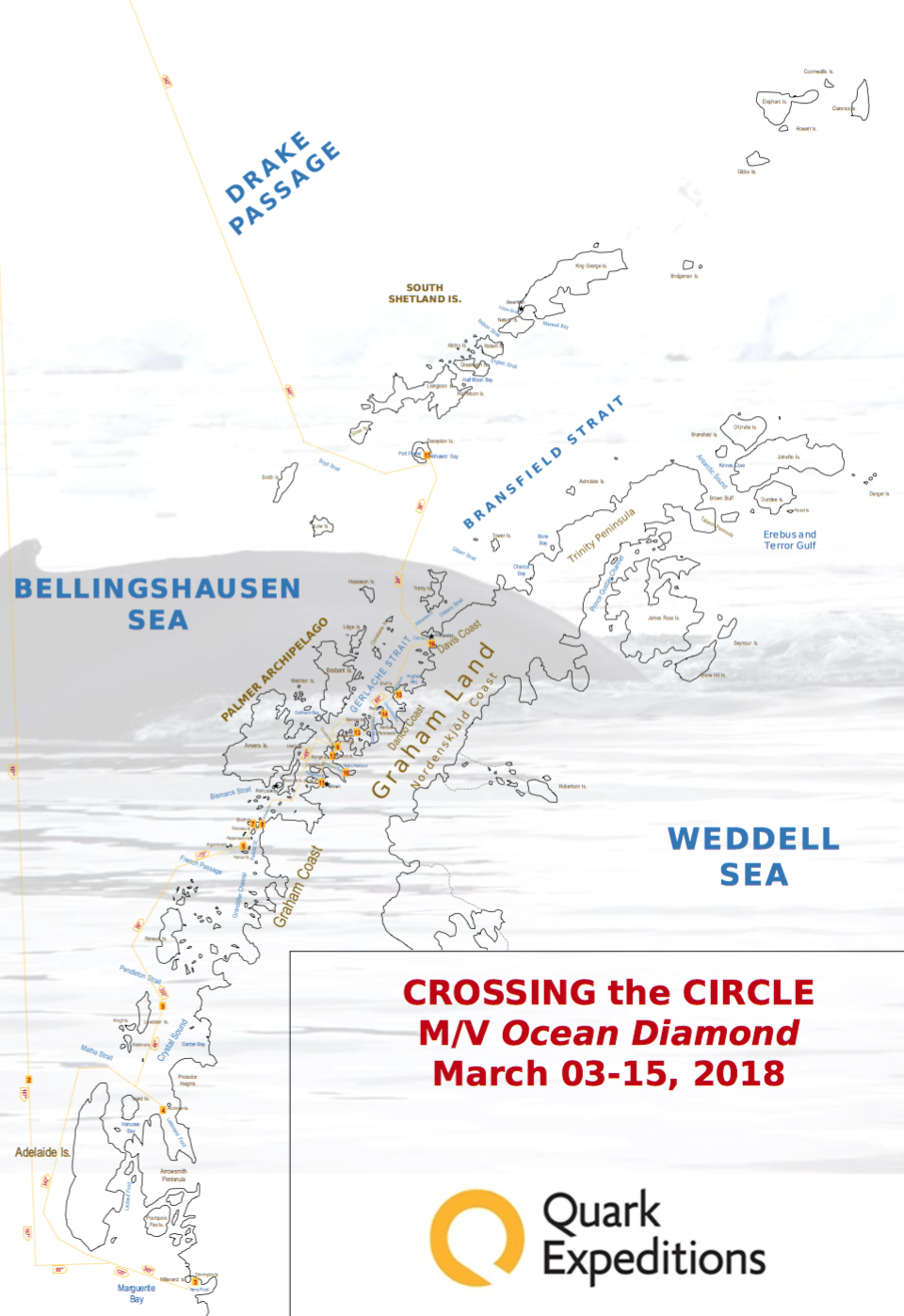 We also had a look at the Bridge Reports and abstracts from the Expedition Log which shows exactly where we were each day: 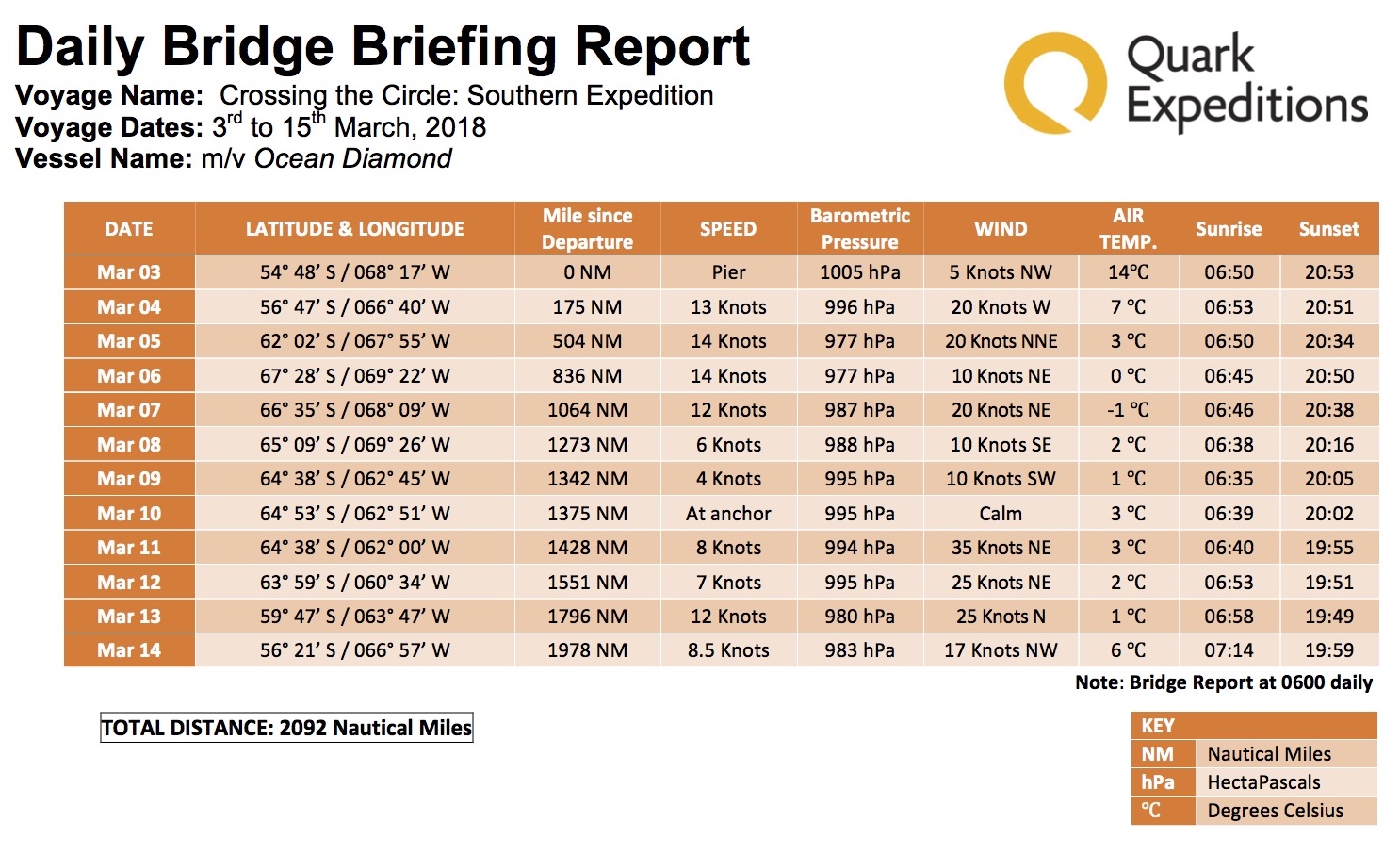 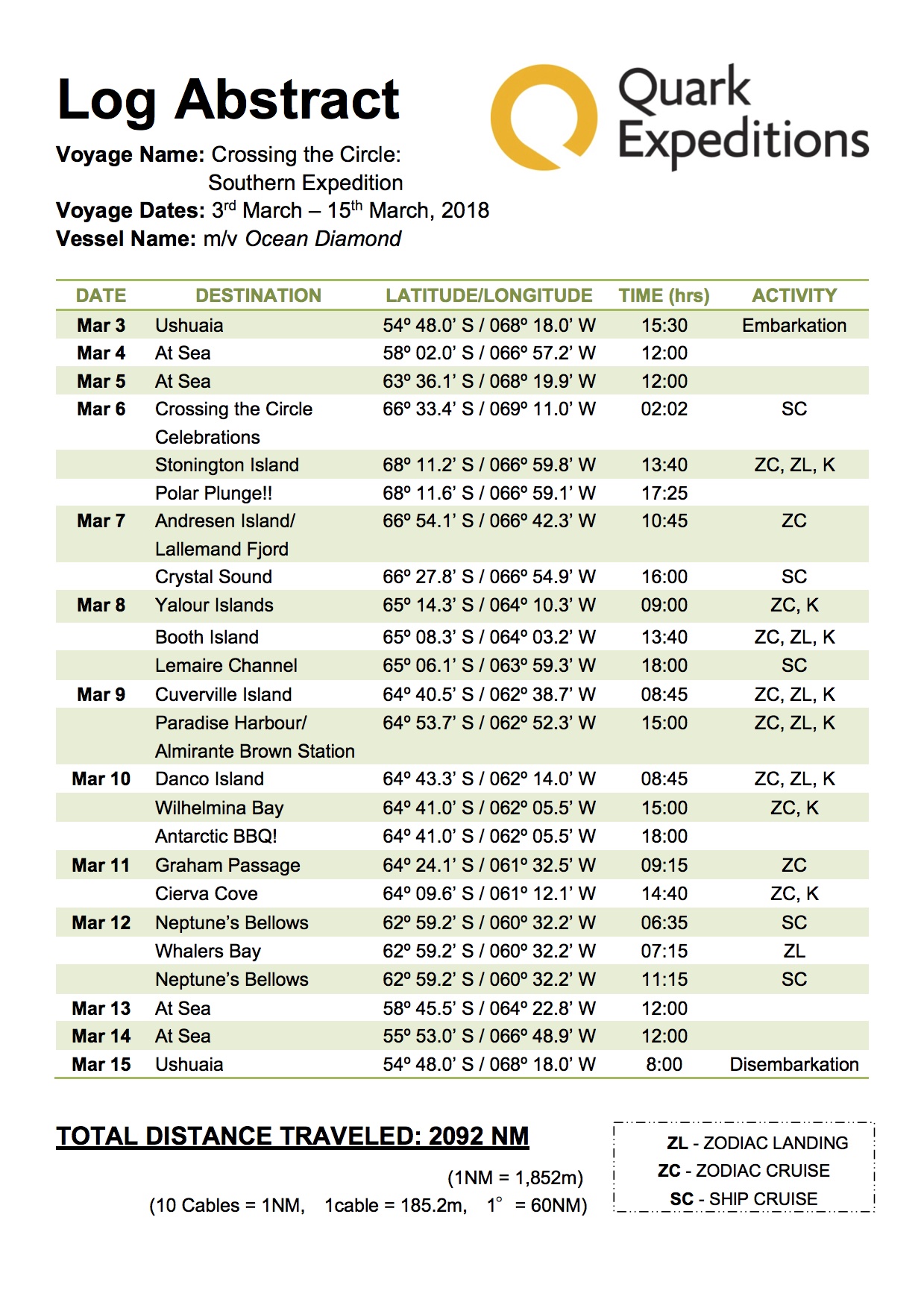 Annie shared some information on the vast array of wildlife that we had seen throughout the duration of our voyage – there had been a running tally of sightings that was kept at the Expedition Counter near Reception which staff and passengers were able to update and it was an impressive variety of wildlife by the end of the trip. 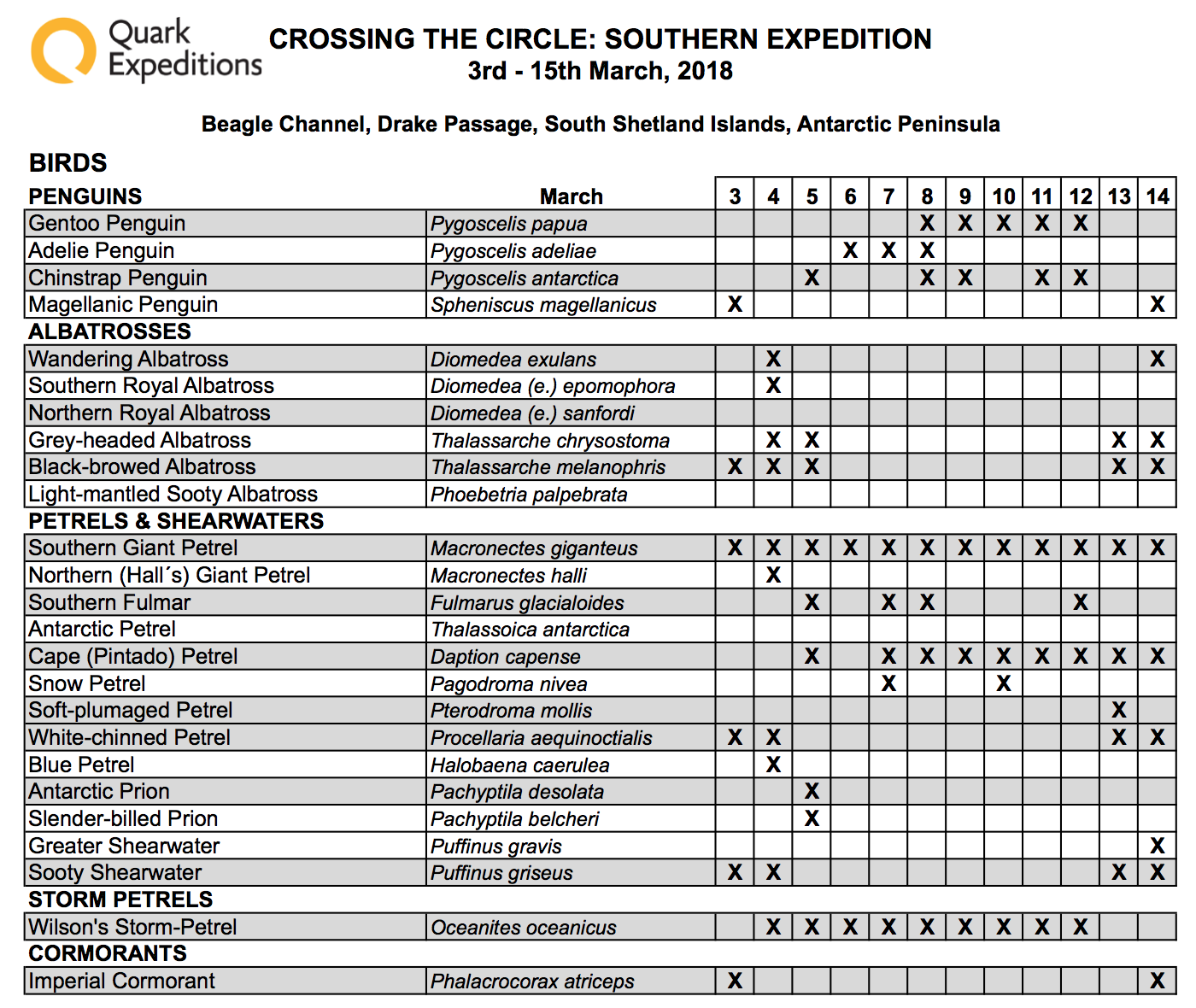 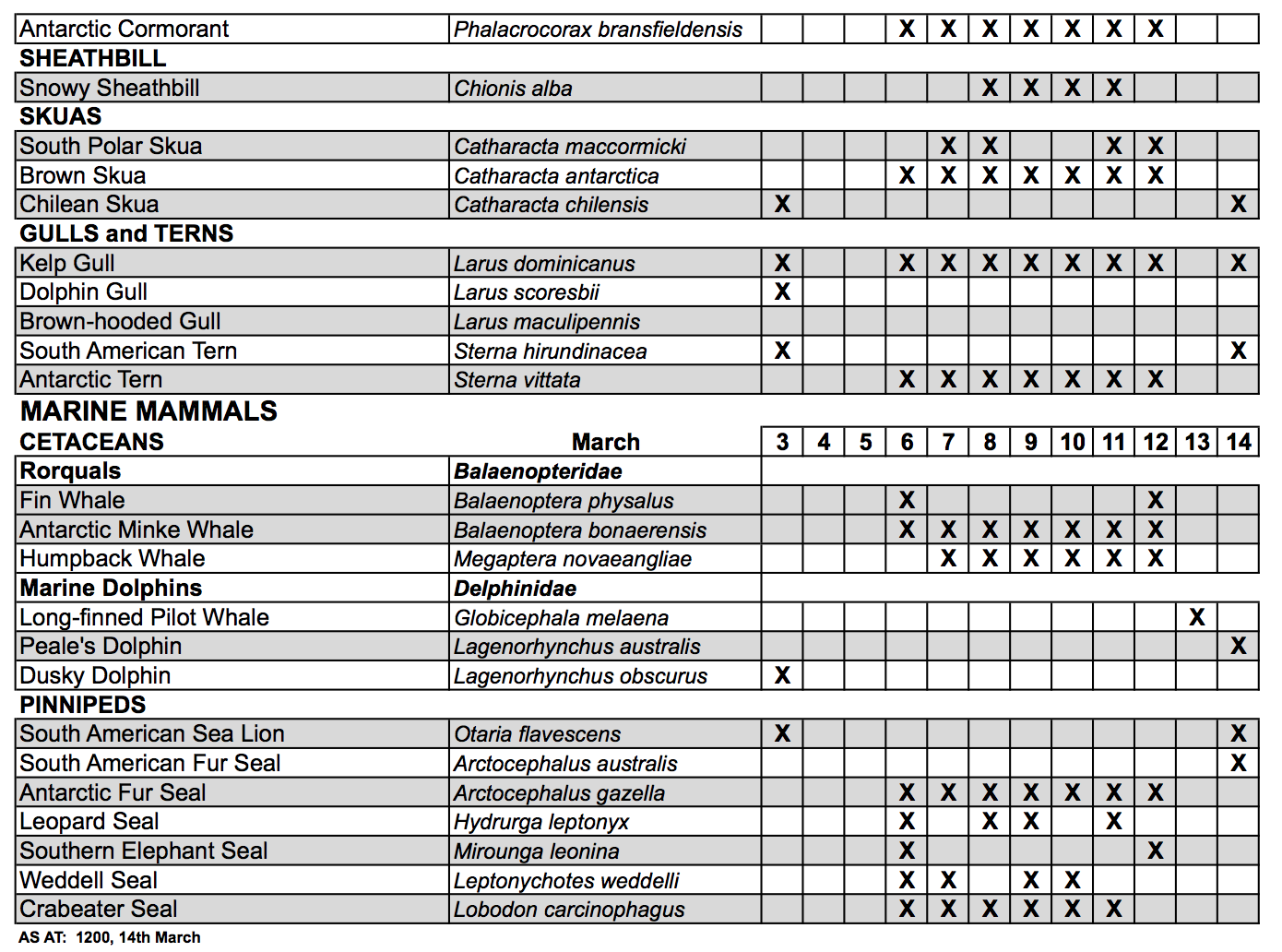 We also got an opportunity to see some of the photos that passengers had been sharing in the Photo Journal.  Some of my photos made it into the slideshow which was nice. Acacia showed us a video she put together of our entire trip, which was very cool – that first landing at Stonington Island seemed like ages ago now! 🙂

Jean announced the winners of our poetry competitions – this entry from Bill (a paediatrician from Boston):

The penguin is a concept absurd,
in behaviour, more fish than bird.
And its pectoral fins are just vestigial wings
Which only makes the distinction more blurred!

And this entry from Paul from Houston:

Ode to the Humble Krill
I watch in wonder as humpbacks breach,
while all around seabirds wheel and screech.
I walk with Gentoos on the shore
while high above, cold mountains crack and roar.
I gaze in rapture as leopard seals stalk and glide
while swimming penguins baulk and hide.
And as I close my eyes tonight
I have a clear and sharp insight
All this beauty would be for nil
Were it not but for the humble krill!

Then Pato showed us a video he had put together of our crazy Polar Plunge swim!  Trish is in here, seen jumping into the water, and the photo of me coming up out of the water makes an appearance towards the end too.  🙂

This is the last voyage for these guys this season and they too will scatter all over the world tomorrow after we disembark.  Our guides are from Australia, Canada, the US, Switzerland, Germany, Russia, Brazil, Argentina, and basically as diverse as the passengers. So they were getting a little sentimental with their farewell speeches as they don’t know when or if they will be working together again… so there were some choked up staff and a few sad faces among the passengers too. 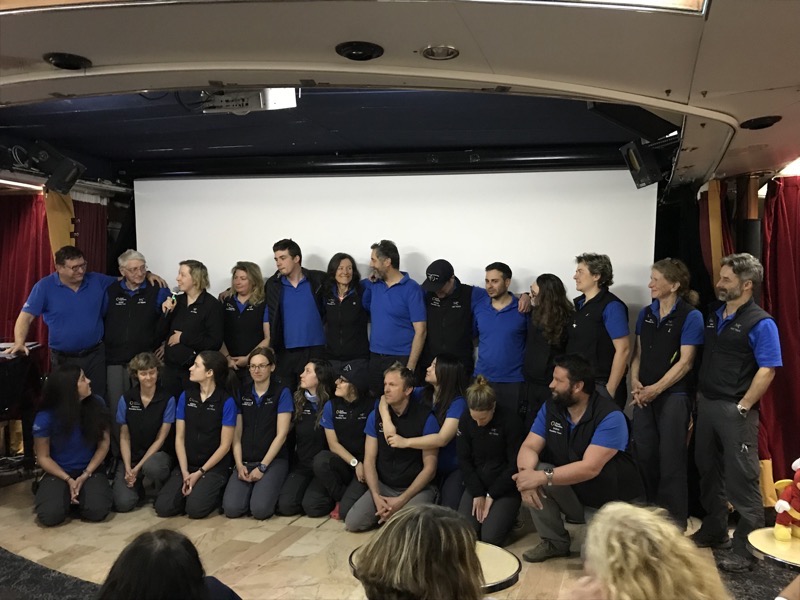 Then it was time for cocktails before dinner.  We had another amazing dinner, and an opportunity to thank Gunter and his wonderful kitchen and Dining Room teams.  The food service on the ship was exceptional – it far exceeded our expectations. 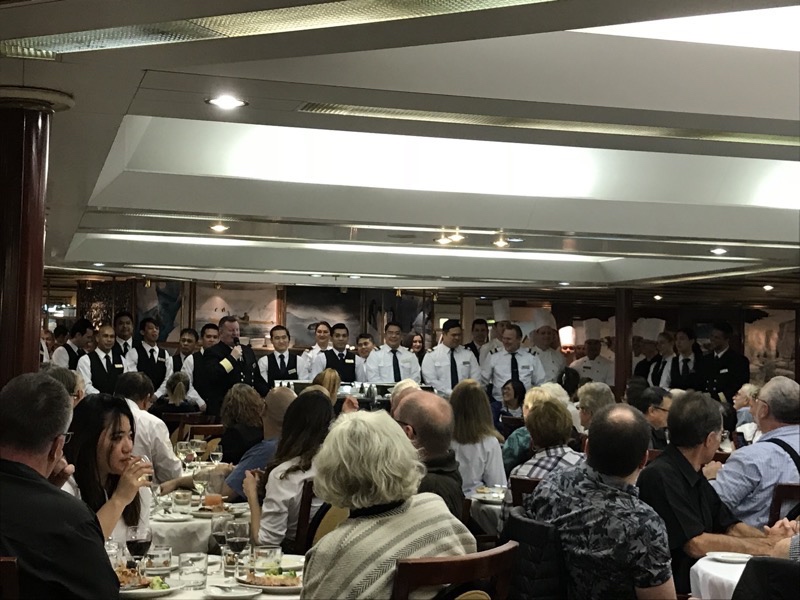 This was followed by drinks and fun in the Club.  But being still in recovery mode, I had decided on a fairly early night instead.  Well, that was the plan anyway…

My early night involved having a shower and going to bed and of course, updating this.  And by the time I had written most of the above it was just after midnight.  I thought we must be getting close to Ushuaia by now – I knew we were ahead of schedule thanks to missing the storms, so I drew back the curtains and what greeted me, but we were not only close but through my salt-grimed window, I could see we were docked at the Ushuaia pier!  I mustn’t have heard the thrusters positioning the ship because I was listening to music as I was writing.  I was immediately excited that I would be able to call the family in the morning when I found some wifi, and I put the laptop away, brushed my teeth and tried to go to sleep. 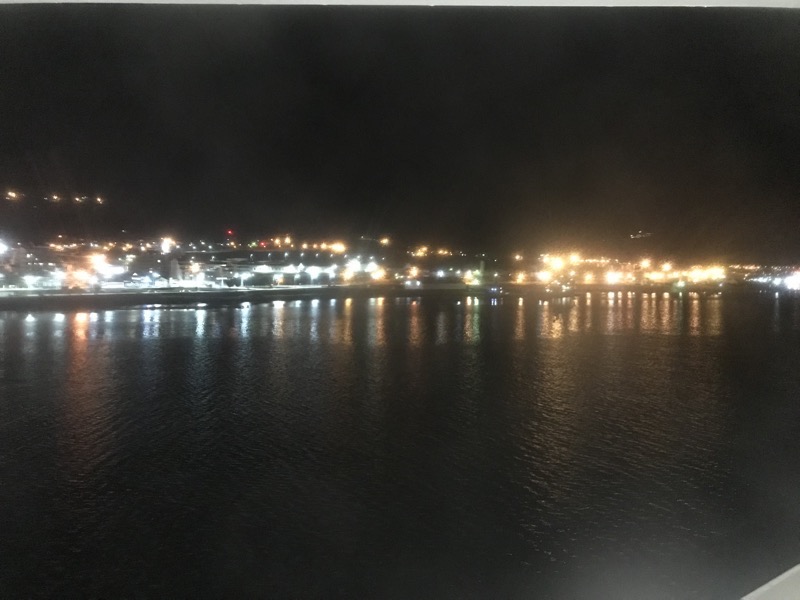 That lasted all of about five minutes before I was up, out of bed, and quickly rugged up and out on deck making ridiculously expensive phone calls back home to let everyone know that we were back safe!  I just knew I wasn’t going to be able to sleep until I had called home.