“If you plan to pay your shipboard account by credit card, please register your card at Reception”

Last night we were told that were going to be outrunning a storm on the way back to Ushuaia. Can’t be too bad or we’d be hightailing it back already, but it has pushed up our schedule by a few hours at least. We have excursions planned for Deception Island this morning and instead of our usual 0715 wake-up call for a leisurely 0730-0830 breakfast, we were being given a 0615 wake up call in preparation for immediate pre-breakfast zodiac cruising and landing excursions.

As we entered through Neptune’s Bellows and passed Neptune’s window – the narrow passage that allows entrance to Deception Island (one of the South Shetland Islands), we had conditions of 2°C and 35-knot winds. The passage is very narrow and very shallow with apparently some areas with only two meters in depth – the ship has a four meter draft so seriously windy conditions are not ideal. Once passing through the Bellows passage area we entered the bay to find less windy (25 knots) conditions but unexpected gusts of up to 40 knots, leading to zodiac cruising and kayaking being cancelled for this stop.

Instead we would be doing land tours only and that meant half of us would go ashore early and the other half could go back to bed for a couple of hours – thankfully our group, Amundsen (I think I mentioned our zodiac groups were named for explorers – Amundsen, Wild, Shackleton and Scott) was in the latter group and we were able to lay in a bit and not rush straight out into the cold.

I’m not feeling any better than yesterday, and have spent most of the night awake coughing. I went to sleep around 2300 and unfortunately was awake about 0135 and 0250 and 0420 and about this time I pretty much gave up. Between the coughing fits and the pain that coughing causes my back, and worrying that I was going to wake my cabin mate, I’ve had a pretty shit night’s sleep when I really need some rest.  So be it.  Today is our last excursion and I’m not missing it no matter how crap I feel. It’s 0820 now and we are going to be loading up and heading out in our zodiac group at 0915. It’s cold, windy and rather dreary looking outside and I have no idea what there is to see on Deception Island – we were told there is a walk to a lookout point atop a sheer cliff (not a clear shift), but with so much low cloud and fog about, lookouts may be a waste of time and energy. Let’s hope it lifts a little over the next hour or two.

Deception Island lies in Whaler’s Bay which was named by the French explorer Jean-Baptiste Charcot, due to the heavy whaling activities undertaken here in the 1900s. There are many old buildings on the island including the dilapidated remains of the Norwegian Aktieselskabet Hektor Whaling Station and a British Antarctic Survey base, which was evacuated during a volcanic eruption which occurred in 1967. The BAS Base, Station ‘B’, had been a centre for aircraft operations in 1955-1957 and again from 1959-1969. It was from this base that in 1928, the Australian Hubert Wilkins, and American Carl Eielson, made the first powered flight over the Antarctic Peninsula, a hazardous 10-hour exploration.

Meteorological and geological research has also been conducted at this site. The beach is covered in ash and cinder, which also covers large barrels, whalebones, water boats and artefacts from the whaling and research groups that once operated here. 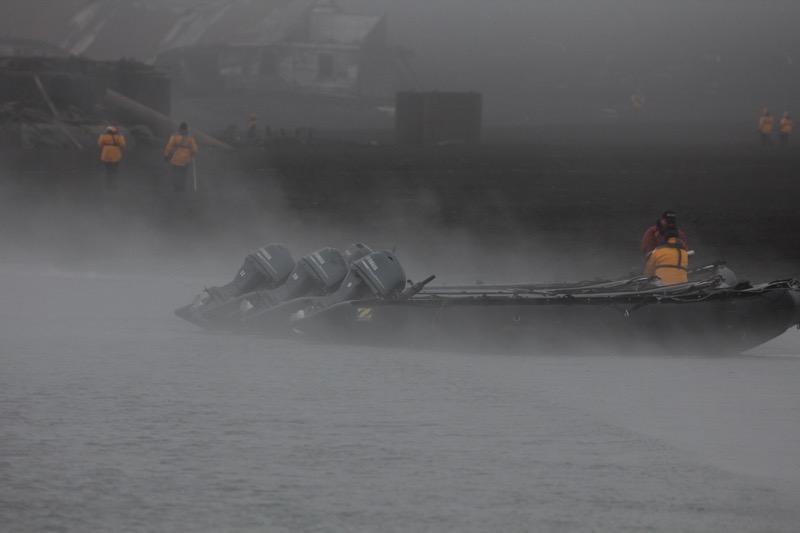 The weather was quite cold today and with the winds gusting up to 40 knots, we were having a bit of difficulty remaining upright at some points. The long black lonely looking beach offers no protection from the biting winds. Today was the first time I found myself wondering what sort of person would want to spend a winter in Antarctica. I also for the first time was wondering what sort of ‘emergency supplies’ the Expedition Team was taking ashore with them at every zodiac landing site… not that I thought we were going to need them, but today was the first day that I would say the environment was less than ‘hospitable’. 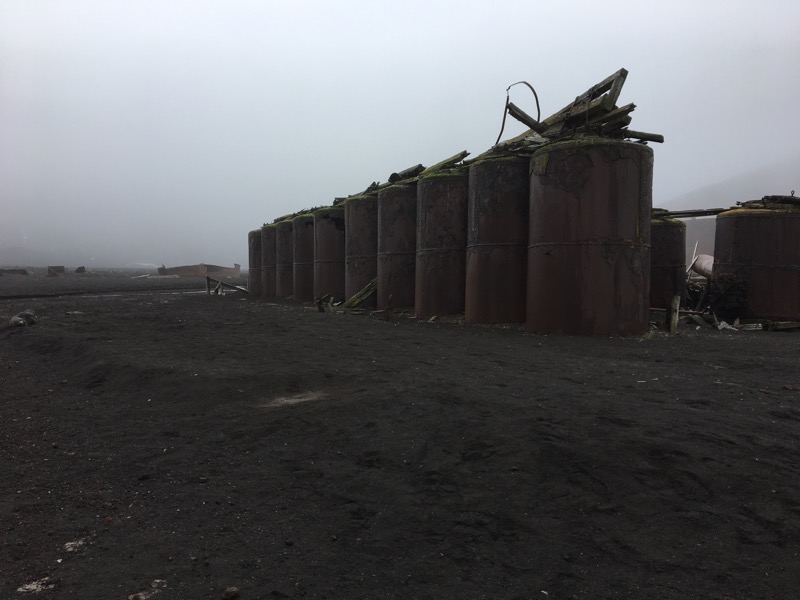 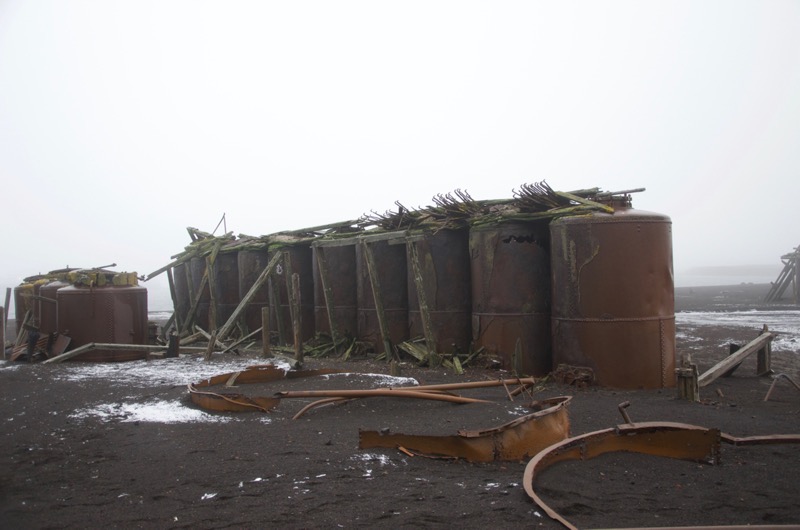 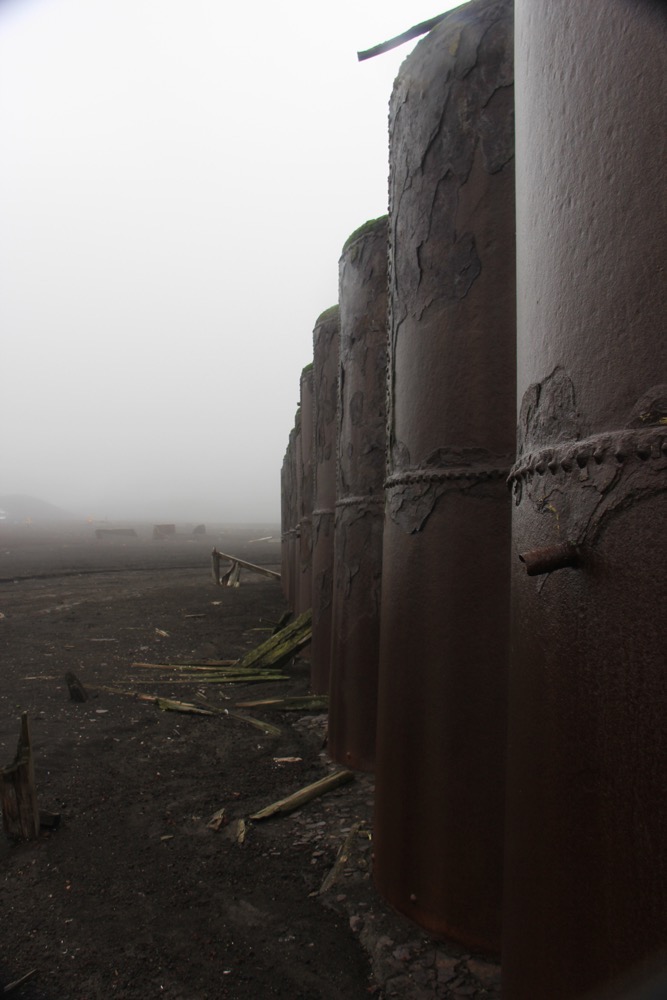 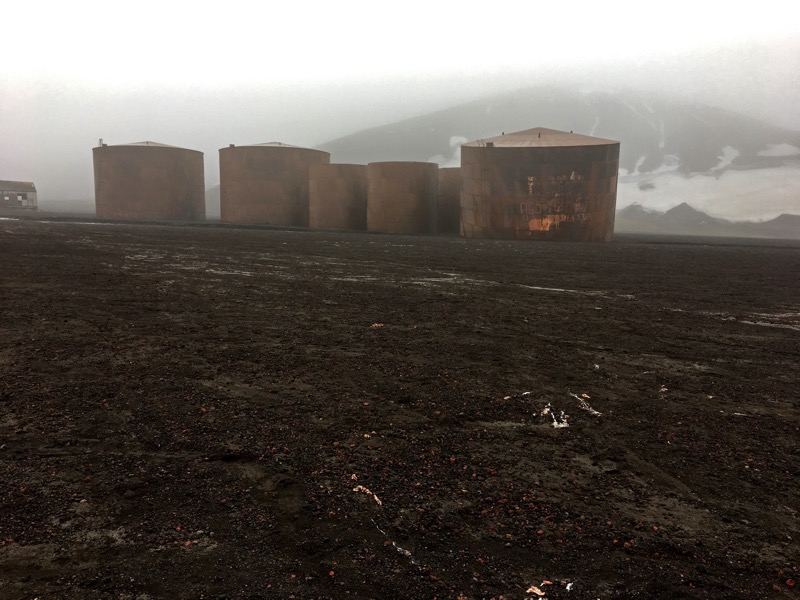 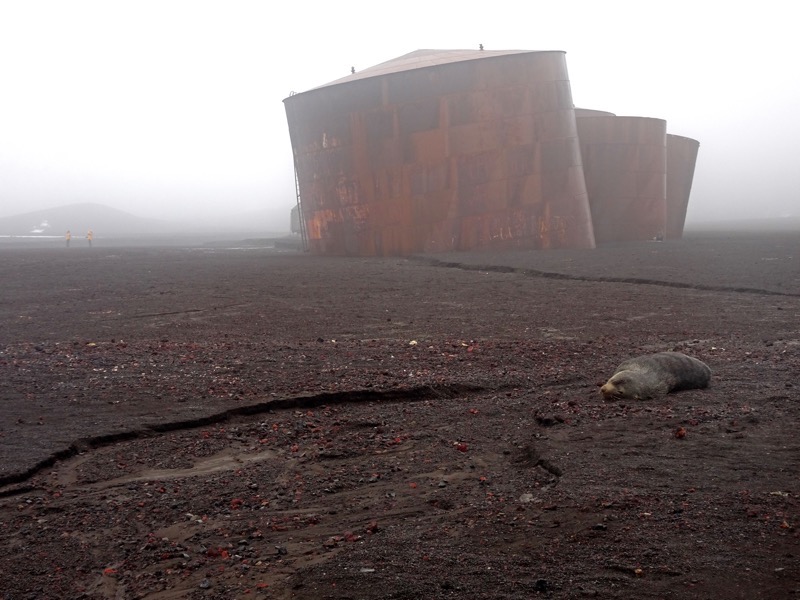 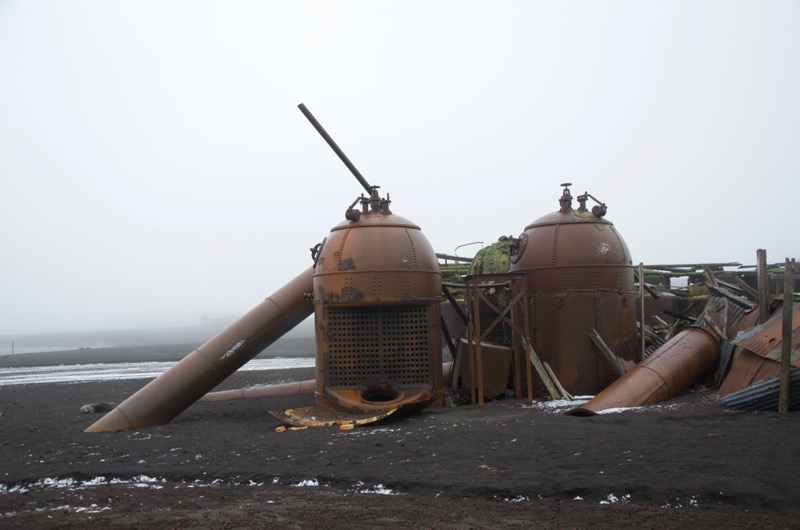 All these old tank structures were used to boil down or store whale oil. 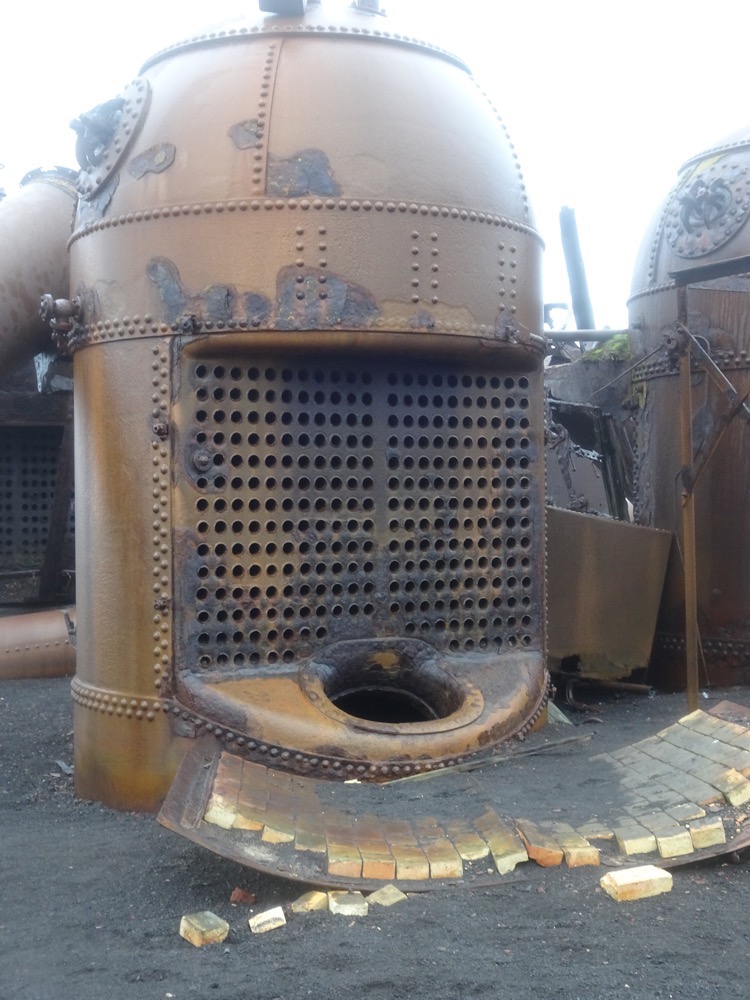 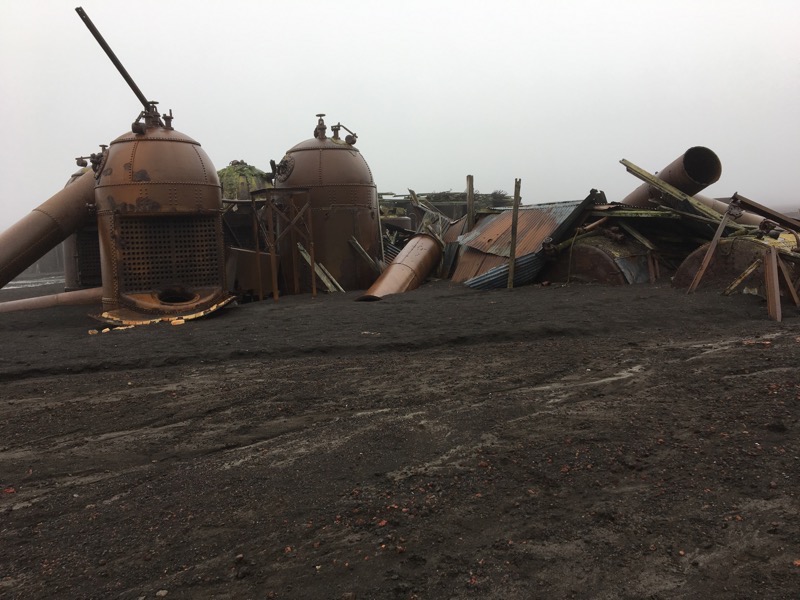 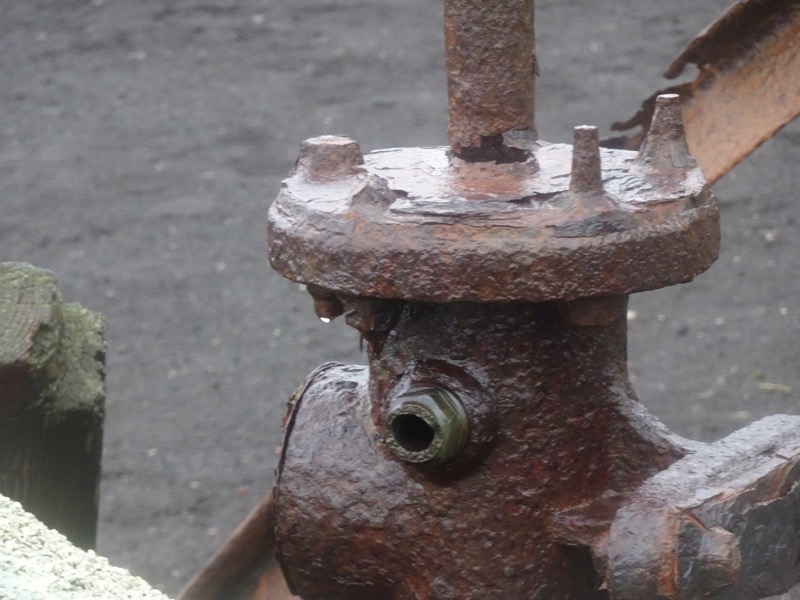 Woody tells me they bring food, water, blankets, temporary shelters, and some items to use for building/securing said shelters. Usually we have around 80 people ashore at a time (IAATO agreements state that no more than 100 should be ashore at any one time for sustainable tourism in the sensitive Antarctic environment and our ship is a good number to allow for the sensible management of visitors), and no, there is not enough food and water for 80 people brought ashore at every landing – but there are enough supplies that they could hold up for a time if needs be, given the very changeable conditions. Today Deception Bay is cold, extremely windy and almost haunting with its ramshackle run-down buildings and tanks strewn about. It’s hard to imagine this place looking like a bustling and active community of whalers and researchers when today it looks so deserted and run down. The cold air was playing havoc with my already labouring lungs and I was out of breath the whole time we were ashore.

We saw plenty of fur seals – but kept our distance, they have been known to bite. 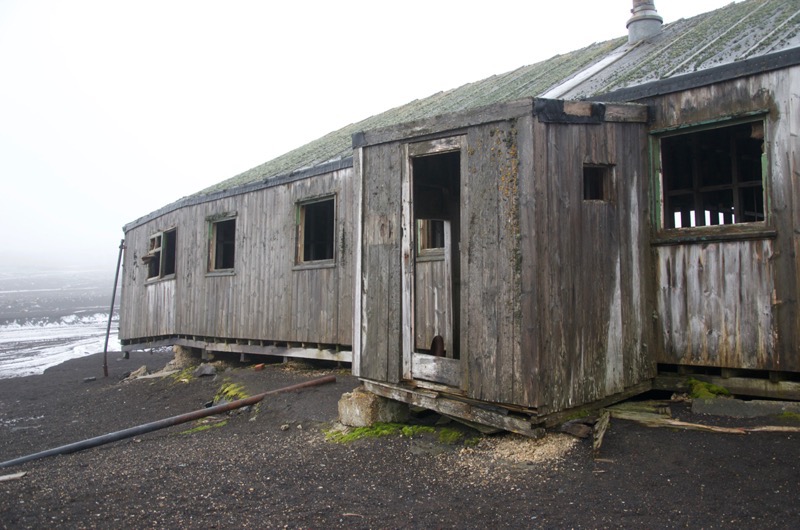 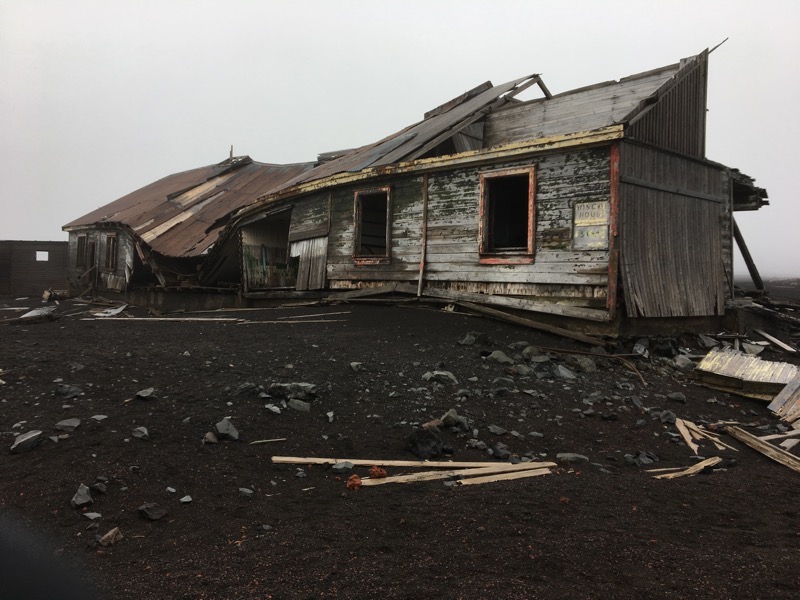 I took some videos of these seals playing? fighting?  They didn’t seem very aggressive but given they are known to bite, I wasn’t getting any closer to find out.  There is a LOT of wind noise on this video so turn the volume down if you are going to click ‘play’. I was going to dump the audio track, but it sort of captures the harsh conditions – it was so windy, we were having trouble walking into it, and I was certainly having trouble holding the camera still in the high winds we were experiencing. 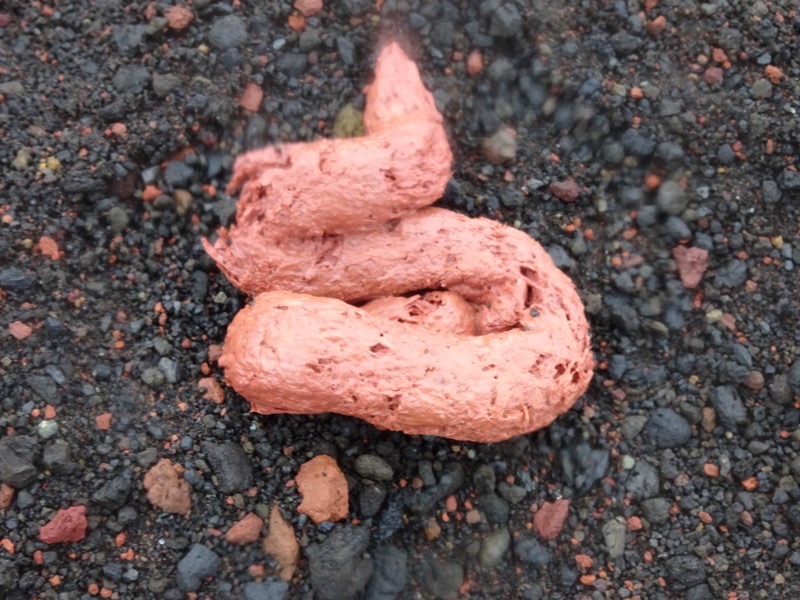 Eventually, my desire to breathe overcame my desire to take more photographs of the hauntingly surreal landscape and we head back to the ship.

Later in the afternoon, we had another lecture “Whales in Depth: Going Deep” with Dany, one of the marine biologists discussing the biological mechanisms that allow these gentle giants to dive to such depths. One of the cutest little jibes I heard out in the zodiacs while we were all marvelling at the enormous humpback whales, was from Dany (marine biologist) – we were all staring in wonder at the whales and he threw Ema (microbiologist) a gentle ribbing: “Yah, why would you study marine biology; microbiology is where it’s at.”

I can’t get over how passionate the crew are about everything in this environment. We have been very fortunate with the weather and have just seen record numbers of whales. The staff are either queued up to say to us, ‘Wow, you have had such luck with the whales, so many whales!’ or we have actually had a very special trip. At various points surrounded by easily more than a dozen of these gigantic graceful creatures – and all of the staff have told us that they have had trips where the passengers were lucky to see even one whale in the distance from the ship. I have seen Naomi with tears in her eyes looking at the whales so close to our zodiac, and Jean saying ‘You saw four whales this outing? That’s amazing, we are lucky to see even one.’  This whole trip has been amazing and today’s foul weather has been the only sign of how inhospitable and harsh conditions must have been here – particularly for sparsely equipped early explorers.

So today is our last excursion and while I won’t be sad to see the back of those clown-sized Muck Boots that I’ve been wearing.  But I am sad to realize that I will probably never be back in these beautiful icy areas ever again.

The rest of the day was spent sailing north as we started to race for a gap between two storm cells – one off the bottom of South America and the other forming over the Southern Antarctic Islands. They had been watching these lows form for a couple of days and knew that we could be forced to make our way back to Ushuaia by going through one of them, but had pushed as fast up the Peninsula as they could so we wouldn’t have to miss our stop at Deception Island. Now the weather radar looked as though we might end up being buffeted around by the edges of both storm cells.

While the Captain and our Expedition Leader worried about the best way to sail back, the passengers were treated to the second half of ‘Penguins: Spy in the Huddle’ in the Main Lounge mid-afternoon while Dr Shannon handed out seasickness medication in readiness for the Drake.

I made it to Dany’s whale lecture, and down to dinner in the Dining Room, but passed on a social ‘Liar’s Club’ in the Club tonight in favour for trying to get an early night.  Have to kick this cold over the next few days before we fly home.