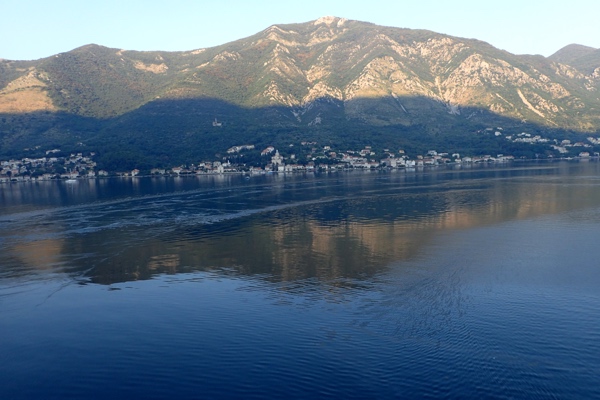 Kotor was first settled by the Ancient romans as early at the 5th century BC, and apparently was later turned into a fortified city but the Emperor Justinian in the 6th AD.  It’s a big tri-angular fortress right on the port of the city, nestled in among the Montenegrin mountains and a picturesque inlet of the Adriatic sea.  Since I was investigating this itinerary this time last year, I have been a bit puzzled as to why the ship calls at Kotor in Montenegro, rather than Dubrovnik in Croatia which is just an hour or so north by car… but after visiting today, I think we can happily say it is a very beautiful town with lots to offer than hardly anyone has ever heard of.  Kotor is a maze of cobblestone streets, and simple buildings with terracotta toned roofs.  There are a number of Romanesque churches and well preserved and restored buildings in the Old Town.   I’m sure I’ll be back in the region again one day and will get to see Dubrovnik, but until today I had been lamenting that we weren’t going to Dubrovnik instead. 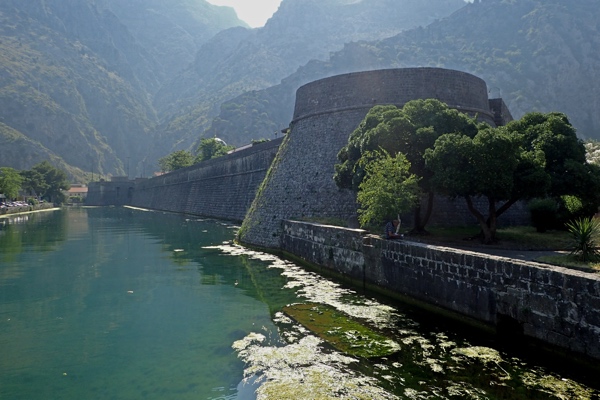 Right off the ship, the medieval Old Town is a just a short walk from the port.  Passing through the enormous fortress walls is quite impressive in itself, and entering the square, visitors are greeted by a beautiful square with a beautiful clocktower. 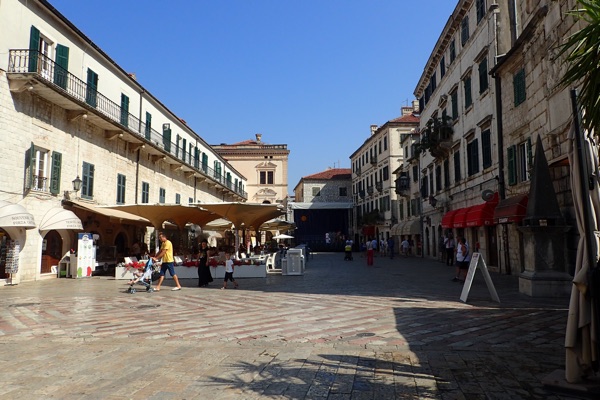 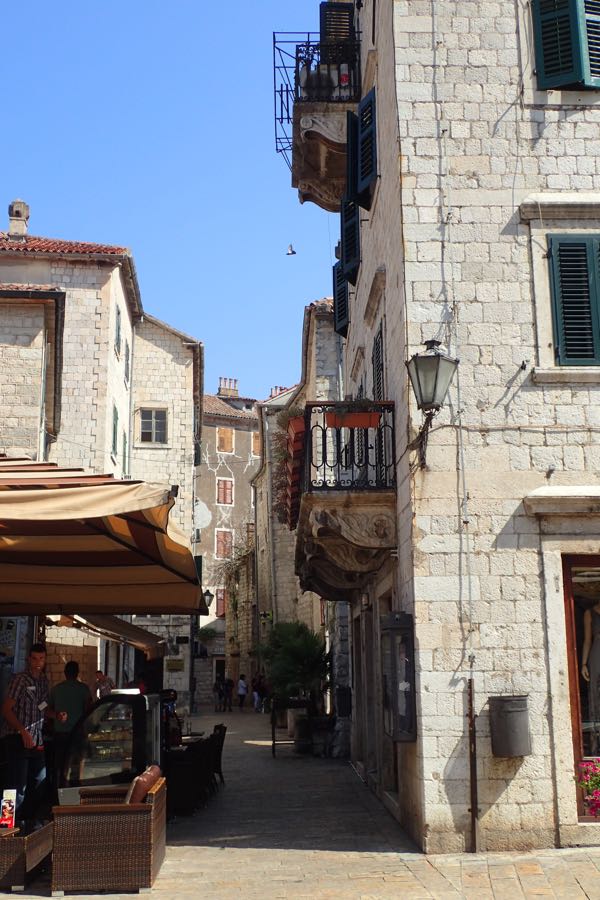 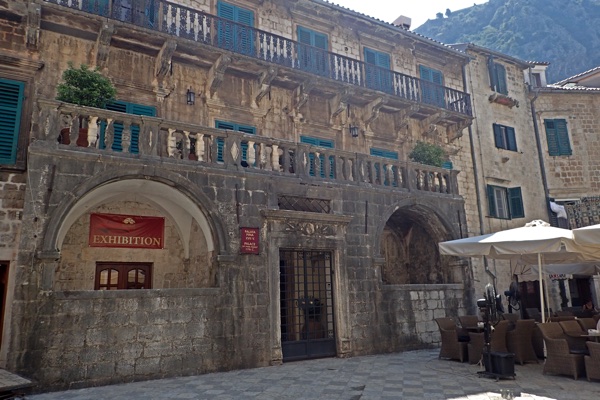 Kotor was another Mediterranean kingdom that was conquered and conquered and conquered again – originally founded by Greeks in the 10th century BC, then the Illyrians, and then the Romans who ruled for 650 years,.  After that the Visigoths stroke on in from Germania and demolished Kotor in the 5th century and then it became of part of the Byzantine Emptier in 476AD until c.800AD.  Then when the Venetians were expanding their dynastic trade routes into the Adriatic, Kotor became and important artistic centre through the Middle Ages.  There is plenty of evidence of medieval handiwork in the Old Town, in particular, in the massive defensive walls that protect the city, and in the medieval architecture inside the town.  Kotor’s modern history is just as convoluted, but well… I’m less interested in all that.  And if you think I remembered all this, you’re mad.  I had to look it all up! 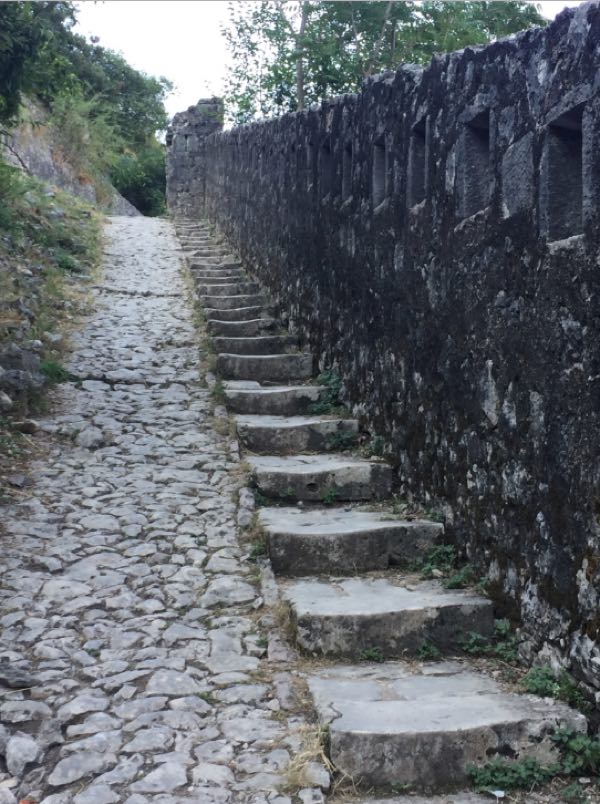 Some of our group decided to walk the fortress walls – got up there early before the heat (wise move it was seriously hot today), and they took the 1200 uneven cobbled steps involved to do the 4.5km walk around the fortress walls.  More power to them, I would have loved to do it, but even take 800 steps off that and I’d have to have re-thought that plan the way my back is feeling at the moment.  The views from the fortress are impressive… 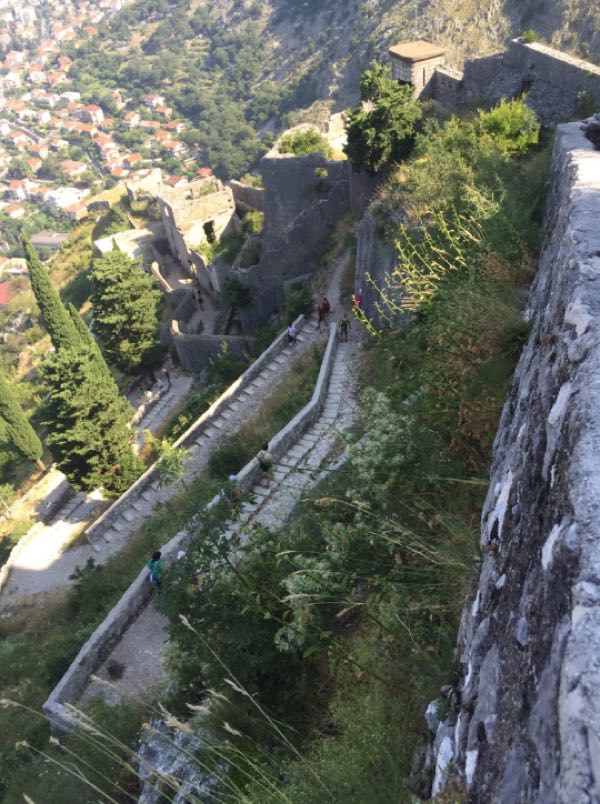 Kotor Inlet… the entire inlet is surrounded by the Montenegrian mountain range which rings the bay.  It very effectively stifles any sea breezes from making it into the town.  Add to that, the fact that the town is entirely walled, and you have one big hot box.  The place if gorgeous, but it was almost unanimously agreed, that it would be twice as beautiful in shoulder season when you weren’t walking around in 35C heat without so much as a whiff of breeze to refresh you. 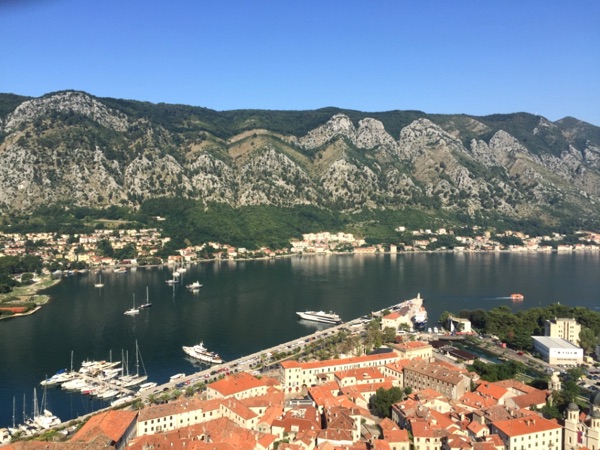 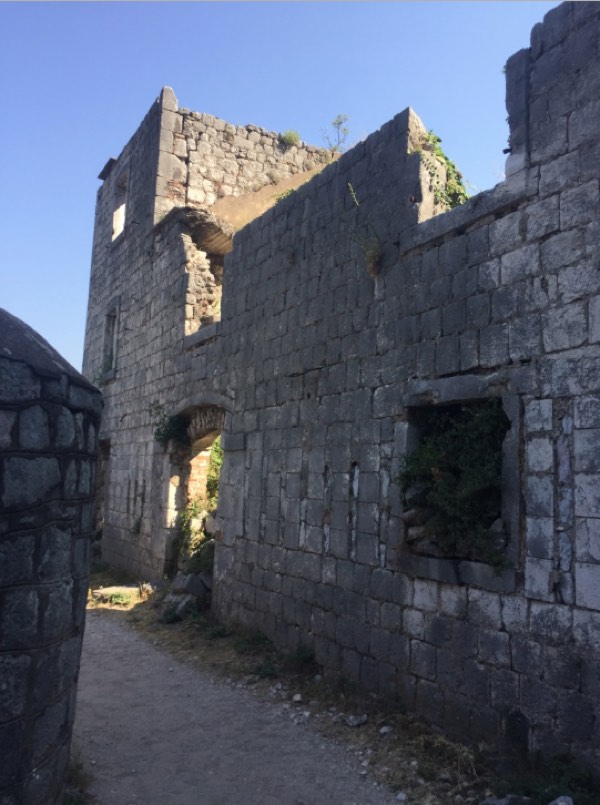 View over the rooftops from the top of the fortress. 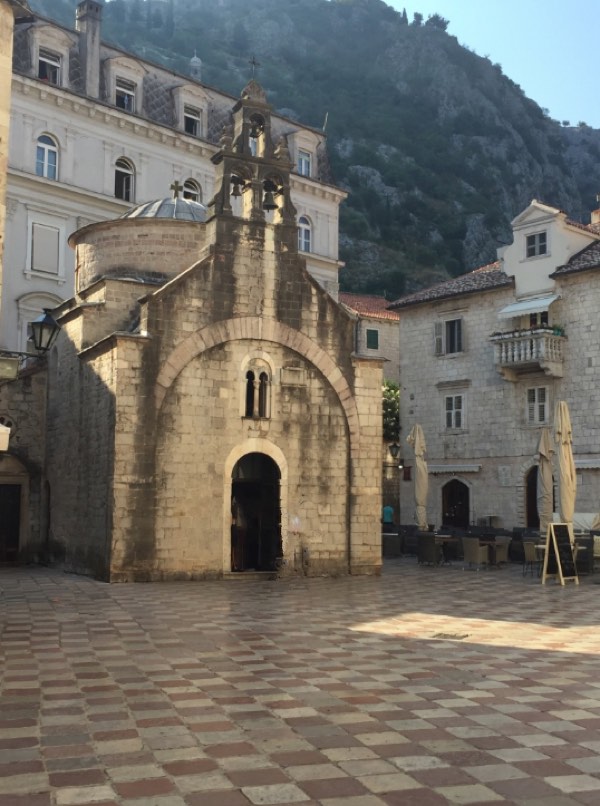 The St Tryphon Cathedral – dedicated to the city’s patron saint and protector; built in 1166, the interior has a lavish gilded altar, some medieval frescoes, and a museum collection of Venetian art, as well as many interesting and unusual medieval reliquaries. 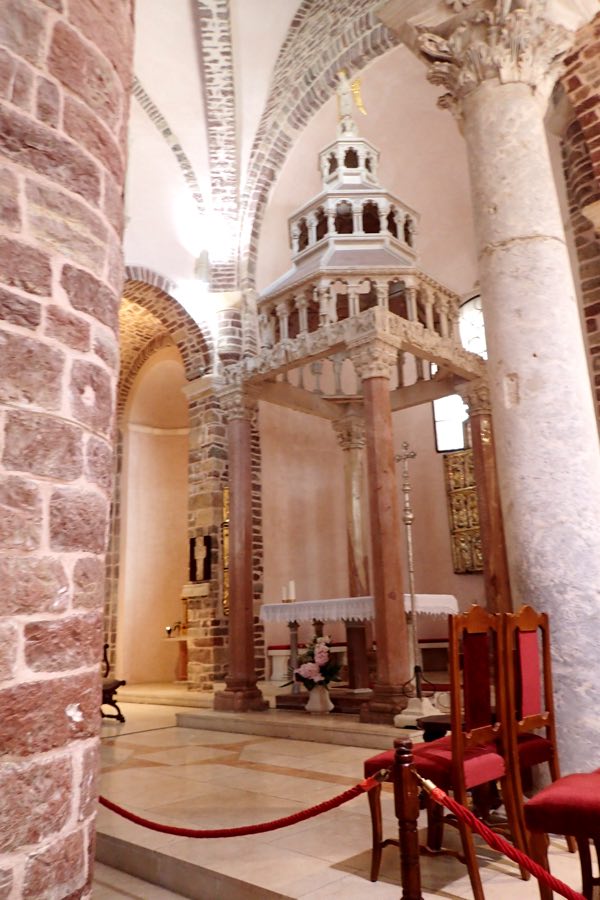 There was no English guide or plaques telling us what we were looking at, but most of the artefacts are 12th-16th century… so we had to wing it a little. Very cool plaque belt/girdle? Loved the work in it so photographed the lot.  Rough guess 1300s-1500s… though my jeweller friends might have a better stab at that. Enormous chunky crown – though no idea whose it was or what time period we are talking here.  Frustrating! View from the top of the Cathedral down to the Square. Lots of meandering little back alleys. We found ourselves delayed leaving port due to a medical emergency, which we later found out was the result of a passenger falling between the ship and a tender boat when embarking the ship.  Apparently the poor guy fell and was crushed, resulting in a broken leg and possibly some broken ribs.  I hope he’s okay, and I hope Princess look after him and his family.

From the ship as we left port.