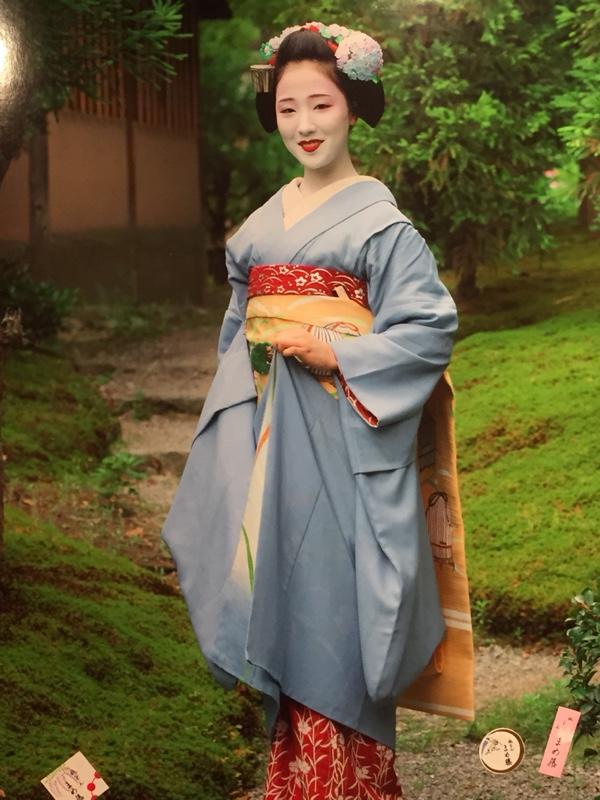 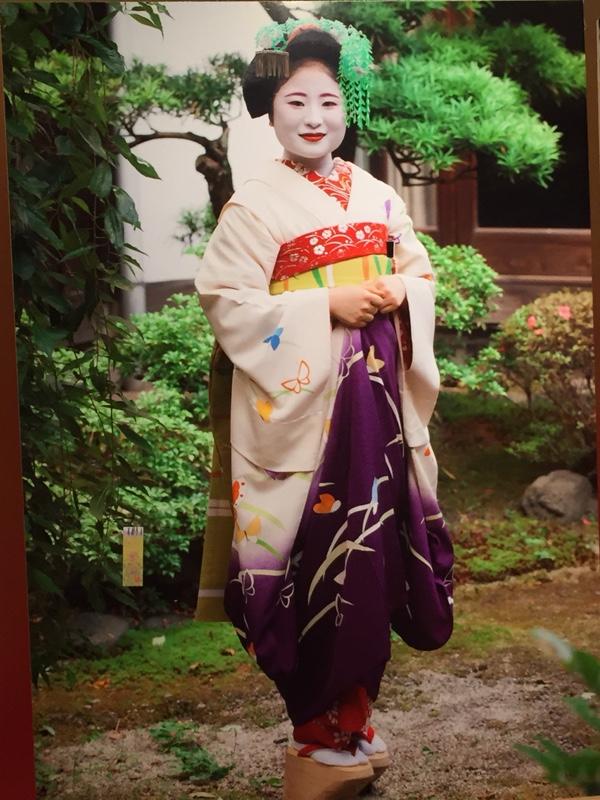 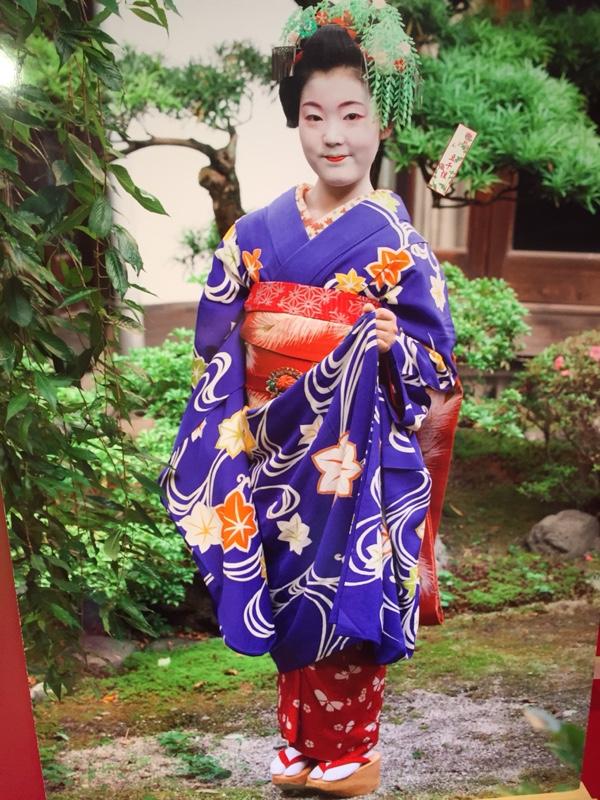 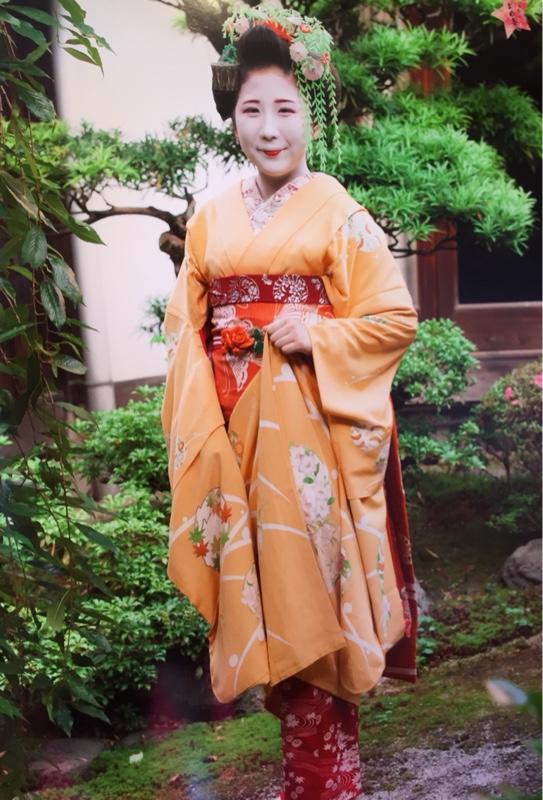 Fans
Hanamachi is a Japanese geisha district. The word’s literal meaning is “flower town”. Such districts contain various okiya (geisha houses) and ochaya (teahouses).  A summer tradition around the time of the Gion Festival for the Kyoto hanimachi is to distribute personalized uchiwa (flat fans) to favoured stores the maiko and geiko frequent.  These feature a crest of the okiya on the front and the geiko’s name on the back (house name, then personal name).  Establishments in the hanamachis that have many geiko and maiko clients often accumulate many of these fans, and proudly display their fans as a sign of quality. 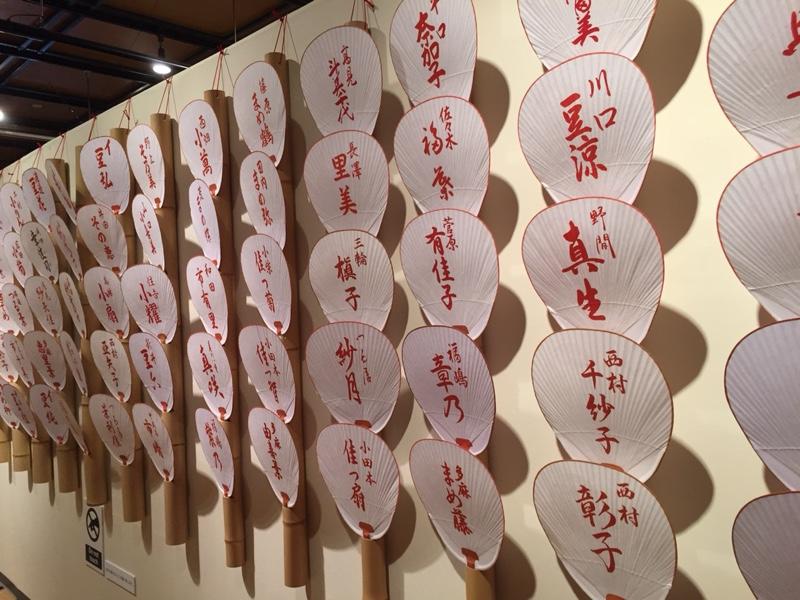 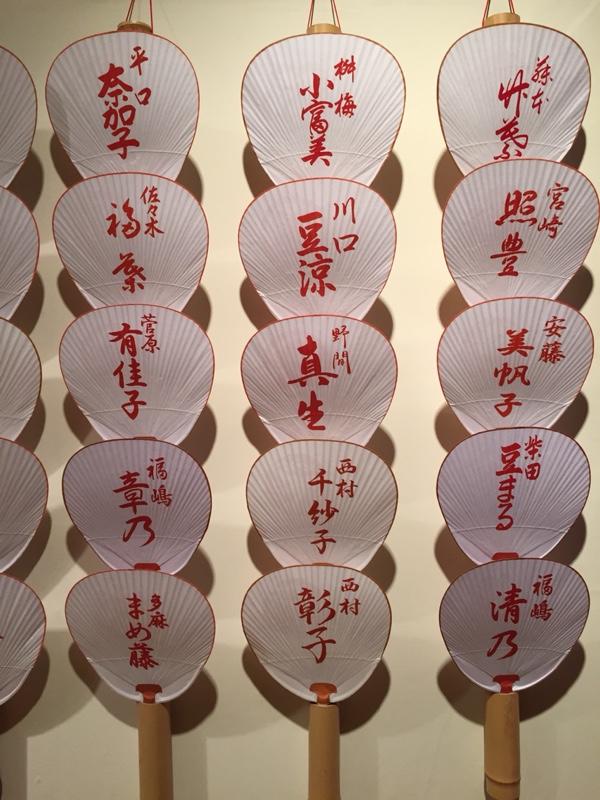 The Mikyako Odori – Ushering in the Spring
When we begin to feel the first breath of April air, the Gion area is suddenly abuzz.
This is become the Gion, Miyako Odori, which is now intimately associated with springtime in Kyoto will soon begin. When ‘setsubun’ ends in February, the geiko (full geisha) and maiko (apprentice geisha) begin training in earnest in preparation for the four daily performances of the Miyako Odore which will be held for capacity audiences for a month from April 1 at the Gion Kubu Kaburenjo Theatre.  The annual dance performances are called the Miyako Odori and this year represented the 143rd presentations of the spring dances.

The Miyako Odori has its origins in performances held for the first Kyoto Exposition in 1872. These gorgeous and stately performances are organized around a different theme every year, and involved a huge cast of geiko and maiko and jikata (???), there will be 139 performances over the season.

As April approaches, the geiko and maiko have o-chaya send programs called ‘bangumi’ to their clients. These programs are addressed to “Mr…, danna-sama,” The more popular the client, the ore bangumi that he receives, or so it is said. The client studies the bangumi that he receives, checking for appearances by his favorite Geiko and Maiko, fretting over issues such as what he should send as a congratulatory gift, and how he should approach the question of gratuities.
The geiko and maiko who will be presiding over the tea ceremony for each session are also decided in advance, and so he will also need to think about sending an elegant boxed lunch or temptin gsweets when his favourites will be appearing. You can be sure that popular restaurants and confectioners will be busy with arrangements.

And exactly like hanami, the parties held to enjoy cherry blossoms in spring, the partons will come with guests to admire Gion’s ‘o-hana’, or “flowers”.  In the hanamachi, when we speak of the o-hana, of course we are speaking of the geiko and maiko. Mokuroku – Adding colour to celebrations in the hanamachi
Even if you are a regular visitor to the hanamachi , mokuroku are something that you won’t often have the chance to see.
On days of celebration, such as omisedashi, when a girl debuts as a maiko, and ‘erikae’, the ceremony in which a maiko becomes a geiko, poster-size sheets of noshi, or wrapping paper, brilliantly decorated with hand-painted pictures, are hung at the entrance of okiya (geisha houses) and o-chaya (tea houses) in the hanamachi. These sheets are called mokuroku.

Let’s consider the day of a maiko’s omisedahi (debut). On this day, the okami of her okiya visits the o-chaya at which the girl used to entertain customers as a minarai (an apprentice maiko). The okami offers each o-chaya a set of gifts to celebrate the minarai’s transformation into a maiko. These gifts include noshi, suehiro, matsuuo ryo, a pair of cups called shimadai, and the collar of a kimono, all of which are presented on a traditional tray called a hirobuta and wrapped in a yellow-green wrapping cloth.

In return for these gifts, the o-chaya sends gift money to the okiya, wrapping the money in noshi paper.  On the day of the celebration, patrons and geiko also send the okiya gift money, together with mokuroku.  For the patrons, the sending of mokuroku is a very stylish thing.

Each mokuroku is adorned with beautifully painted pictures in gorgeous colours which symbolize the celebration and add colour and decoration to the event. Pictures of auspicious motifs including treasure ships, red sea bream, bells (which serve as lucky charms), sake cups for toasting, otafuku, and uchide-no-kkozuchi, or lucky mallets, add colour to the entrance of the okiya and o-chaya, setting the mood for the celebration.

Tradition is highly valued in the hanamachi, and the use of mokuroku has therefore been passed down over the years as a traditional way of expressing congratulations.

Unfortunately, today Gion’s okami are apparently worried about the decline in the number of craftsmen who can paint mokuroku, putting this tradition in danger.

Omisedash – Debut as a maiko.
There was a time when Gion faced a shortage of maiko, causing concern for the future. More recently however, the number of maiko has been increasing year by year probably refelcting the influence of movies and novels.

A girl who comes to Gion seeking to become a maiko will enter a house called an ‘okiya’, where she will live and be taken care of in every aspect of her life.

These okiya may differ from each other in aspects such as their specific traditions and conventions but they all become the homes of the girls who enter them.

A prospective maiko, is initially called a ‘shikomi-san’. As a shikomi-san, she will begin by following the senior geiko, geiko and maiko around. She will also do the household chores for her okiya, and at the same time attend dance lessons and learn how to powder her face and how to put on a kimono. In this way, she will gradually familiarise herself with the hanamachi.

After spending about a year as a shikomi-san, she will finally begin wearing a special costume, and will be allowed to entertain customers at a zashiki as a minarai-san. After completing a period as a minarai-san, she arrives at her omisedashi – the day when she makes her debut as a makio.
On the day of her omisedashi, the new makio wears a black formal kimono and attends a ceremony at which she and her seniors drink a cup of sake in turn as a way of giving thanks and congratulations. This ceremony is characterized by a a sense of both tension and celebration that is difficult to describe.

Colourful hand painted posters, mokuroku, are hung up at the entrance to the okiya, adding vibrant decorations to the celebration. These posters are offered by o-chaya, patrons and others to congratulation the maiko on her omisedashi.
The new makio’s very frist job on her first day is to make courtesy visits to o-chaya. Looking exquisite, she makes her way around the hanamachi, visiting the -chaya in turn and offering graceful greetings at each one.

The tension she feels on her first day, combined with the traditional etiquette which her training has made an essential part of her, adds a sense of dignified elegance to her freshness and innocence. 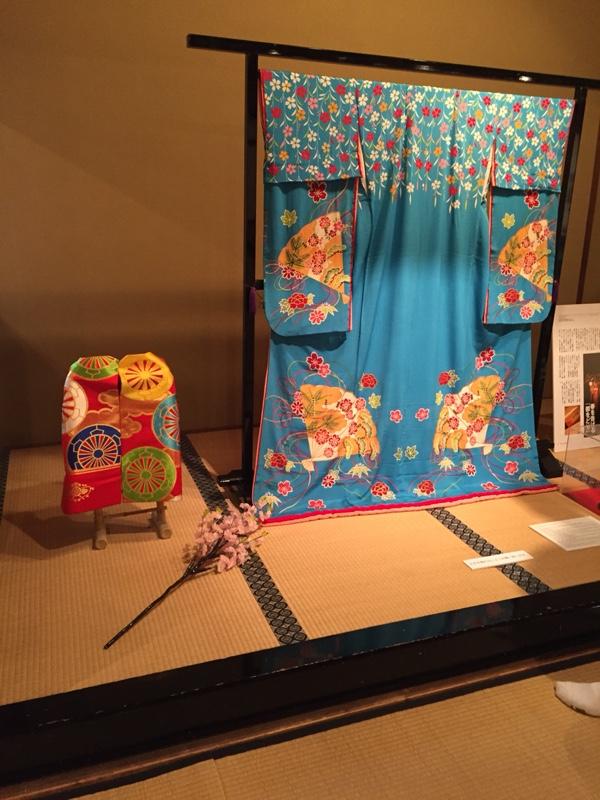 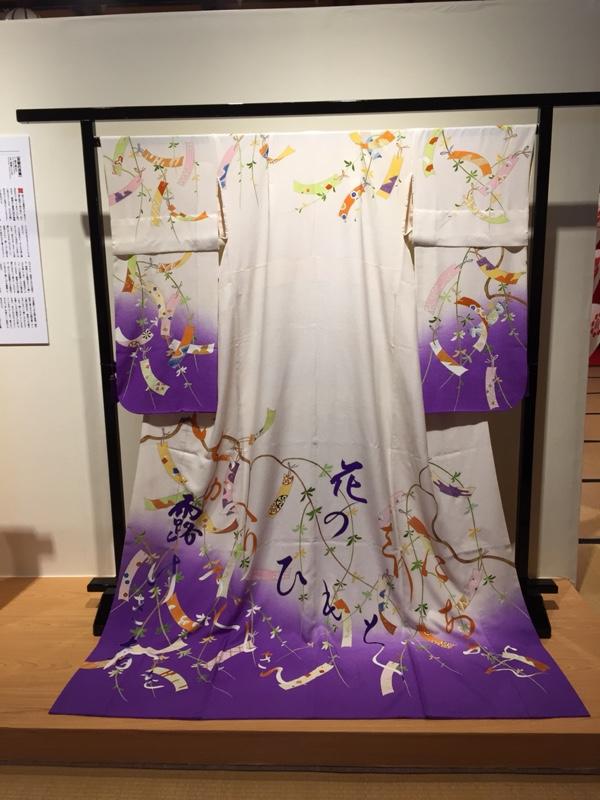 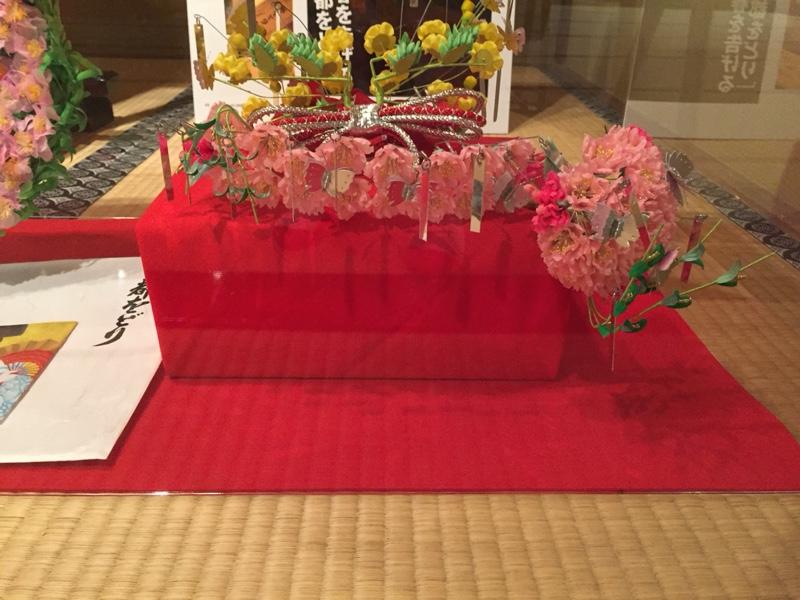 Erikae – Graduation to full Geiko.
The transition from maiko to geiko is called erikae, which literally means ‘replacement of the collar’.
Although there are a number of theories as to the origin of this term, it seems most likely that the advancement to geiko states is called erikae becaue the maiko repaces her red collar with a white one make of Chinese brocade when she becomes a geiko.

Having spent the latter half o her teens as a makio, when a girl passes the ago of 20, it is time for her erikae.
When she has her erikae, the young girl is transformed from a cute maiko into an adult, fully-fledged geiko with all the changes in style and appearance that this implies. But these changes do not take place in a single day. The day of a maiko’s erikae is scheduled in advance and in her remaining days as a maiko, she will wear a special hairstyle called ‘sakkou’, and appear at zashiki in a black kimono. Maiko from some okiya also paint their teeth black, a custome called o-haguro. The maiko usually performs a dance entitled ‘Kurokami” (Black Hair) in this period.

When the maiko finally becomes a geiko, her own hair will be covered by a traditional Shimada wig. She will wear kimono with sleeves of normal length, shorter than the sleeves of a maiko’s kimono, and will no longer wear the darari no obi, the long obi belt which is unique to maiko. She will no longer use the obi clips called pocchiri which will be replaced by decorative cord for holding her obi belt in place. She will also stop wearing the tall sandals called okobo.

In the evening of her last day as a maiko, she returns to her yakata and performs ‘Kurokami’ for her regular customers and other people in the house, saying goodbye to her days as a mako. In her very last moments as a maiko, her chignon is cut with a blade in order to let down her hair. The okami of the yakata where she has been taken care of, as well as her seniors and juniors from the same okiya, join in this ritual giving her thanks for all the efforts she has made. In some cases her regular customers will be invited to witness the ritual, but this is rare.

The new geiko has endured hard training which began in her mid-teens and she is now finally becoming an adult. She sheds tears of happiness, but tempered with a certain feeling of sadness. In her last moments as a maiko she is lovely, but the sight is also a moving one because her days as a maiko are gone forever.

To be a geiko is to be judged as a moving work of art. 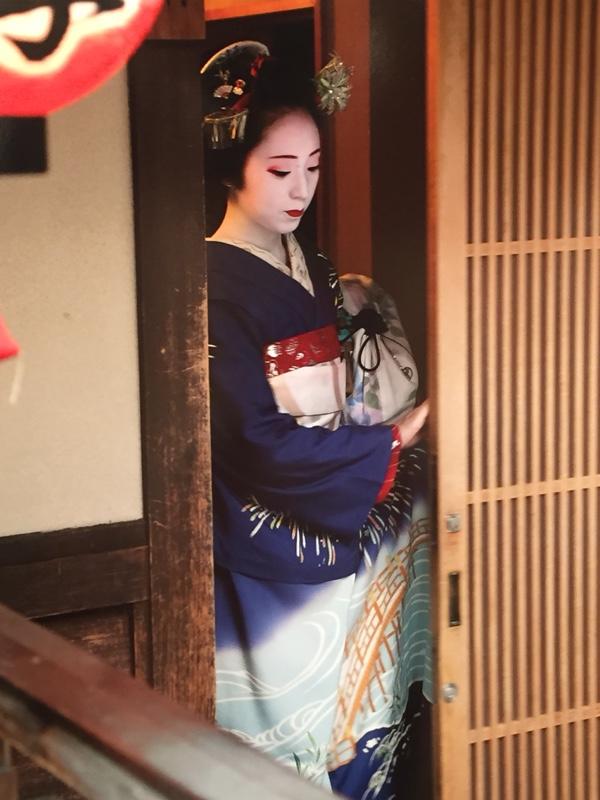 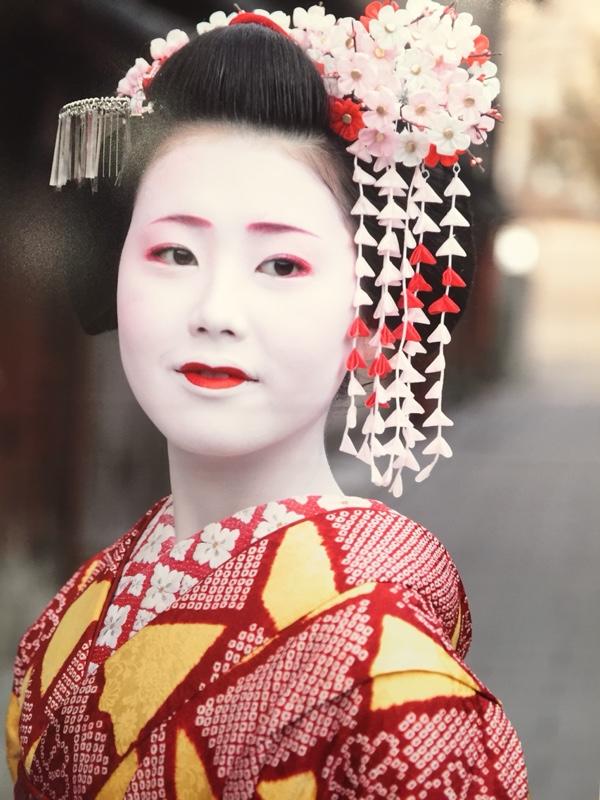 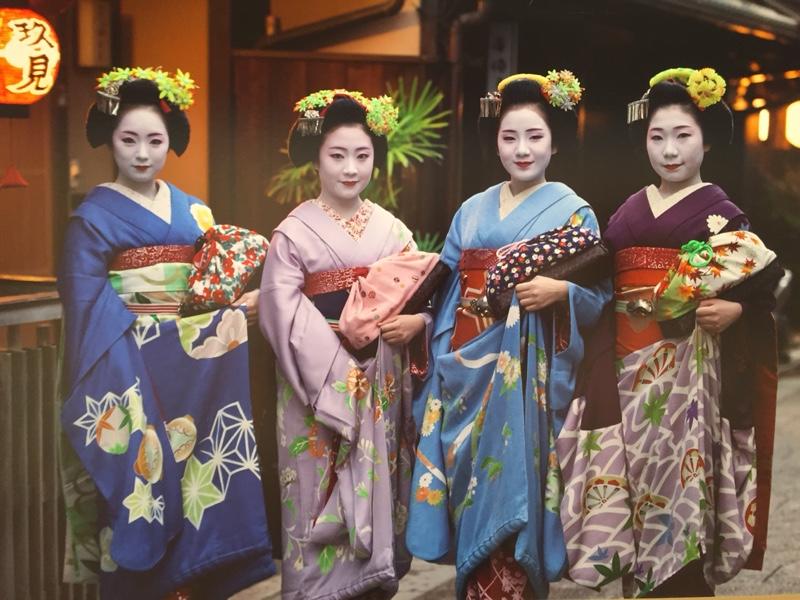 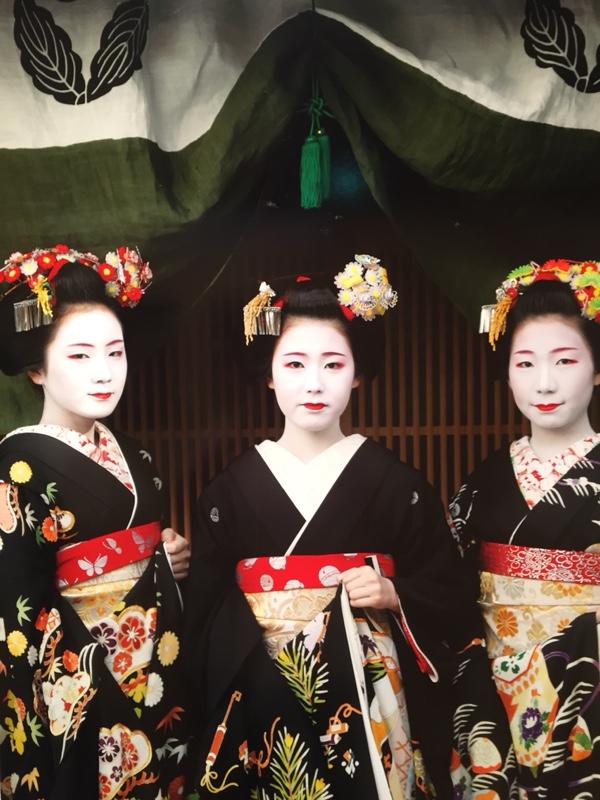