Aunty Mary and I set off this morning looking for the Kyoto Museum of Traditional Handicrafts… and decided to go via taxi seeing that it wasn’t far away and it was going to be ¥630 by taxi and about ¥480 by bus but with a walk in the god awful heat we are experiencing.  I did my due diligence and copied the address of the !centre into a note on my phone (in both English and in Japanese characters) and showed it to the little taxi driver. ‘Hai!  Hai!’ and off we went.  All was well and he let us off at two large buildings marked the Kyoto Handicrafts Centre.  Cool.  We go in and discover we are actually at a different place all of 400m away from the Kyoto Handicrafts Museum!  Oh well, they have a roster of craftsman working in their studios and today was showing up traditional Damascene work, so we went in and had a look around. 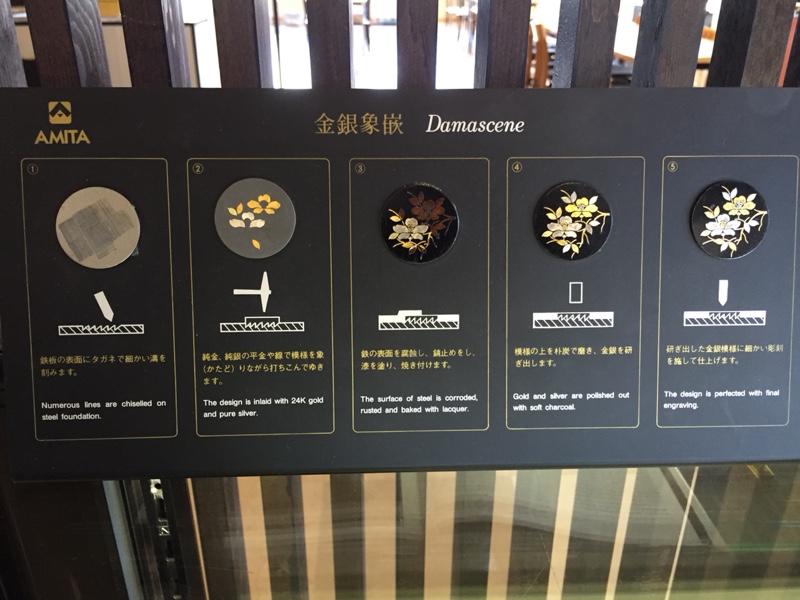 I had never really heard of Damascene work before, being more interested in Japanese woodblock printing and in Japanese tattooing, but this was really interesting. They use a series of intricate chisel tools to make marks on a steel foundation and then apply a design with gold and silver leaf.  The surface is then oxidised and then baked with a lacquer.  After which the gold and silver are polished out with charcoal.  Detail is added by using engraving techniques and the end result is extremely delicate metalwork done in precious metals. 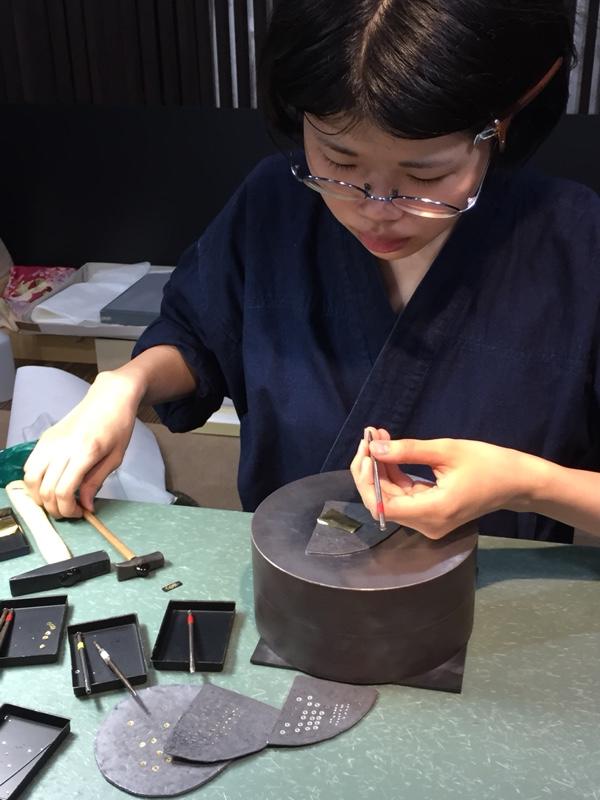 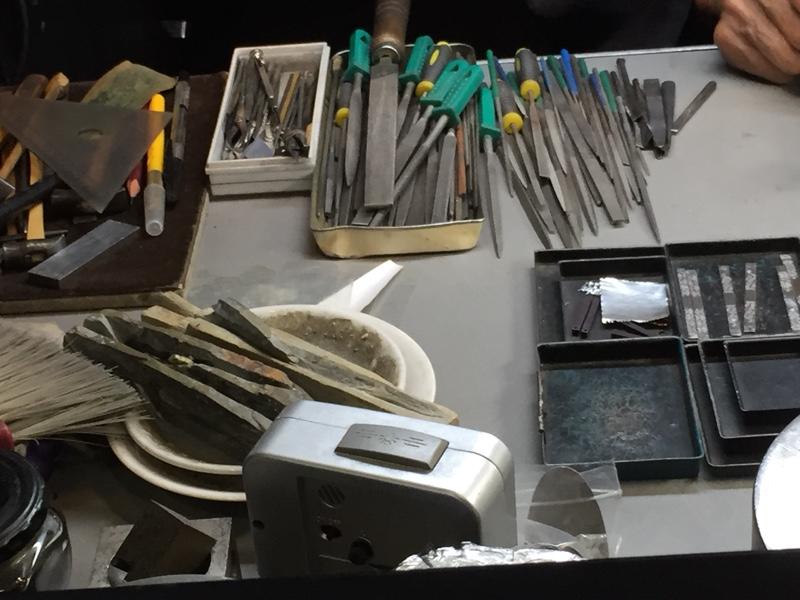 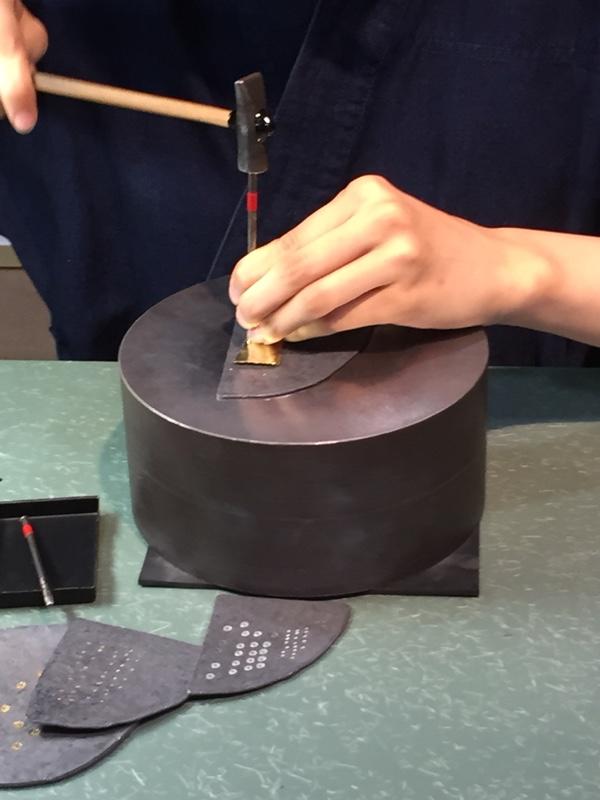 These pieces are the results of hundreds of hours of very careful and delicate work… hence the AU$2,000.00 price tag for this piece which measured about 6cm square. 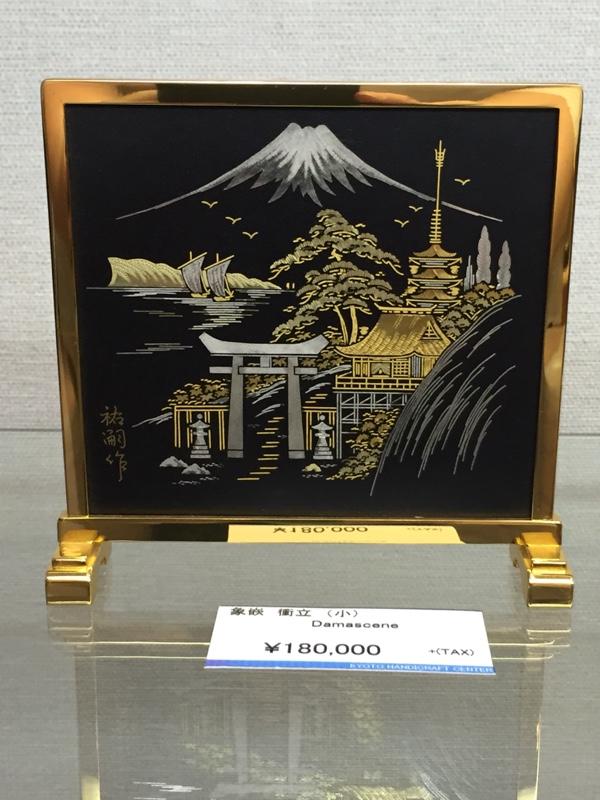 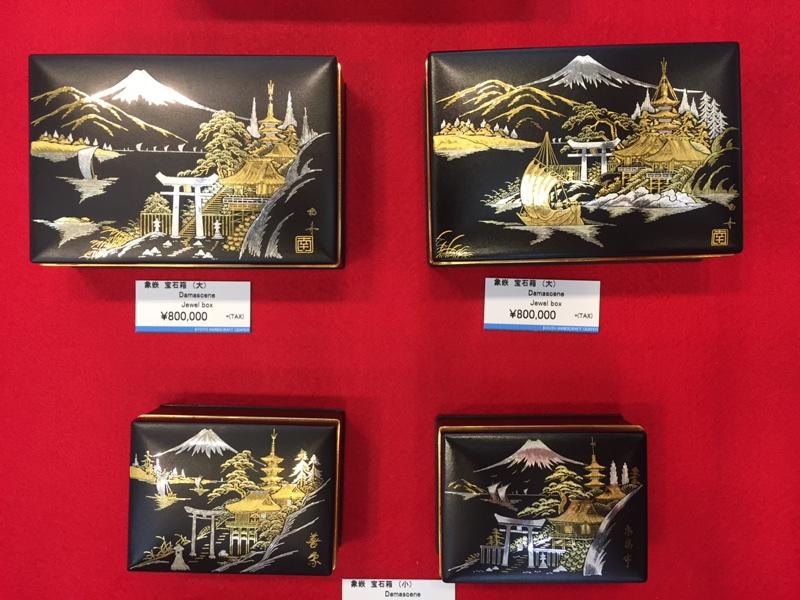 The Kyoto Handicraft Centre also had one of the most remarkable gift shops attached to it, full of work that is created on site when the different craftsmen are scheduled in to demonstrate their skills.  There was doll making, which was considered an art for the nobility.  The delicate ceramic work, embroidery and extremely fine painting that goes into these dolls is evident in the entirety of the piece. The doll maker is a bit of a jack of all trades working with textiles, ceramics, hair and paper. These dolls are about 35cm in height and so ridiculously detailed. 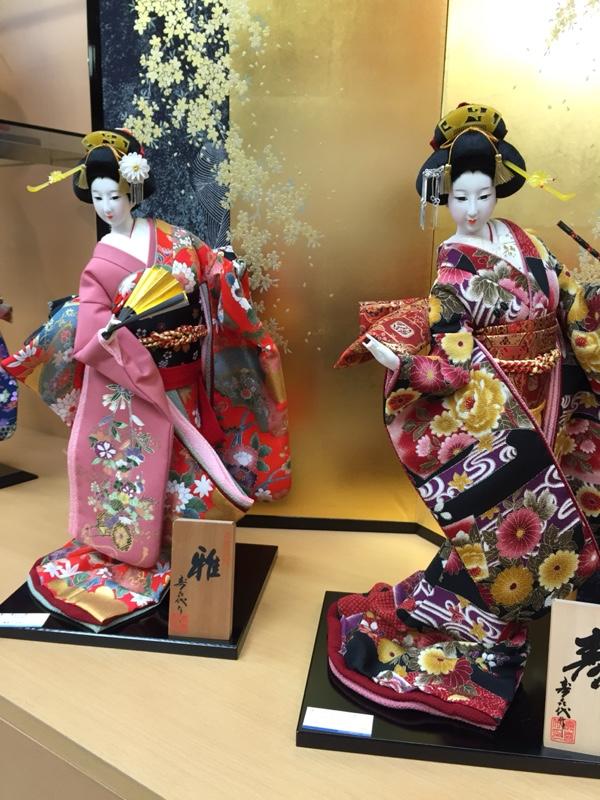 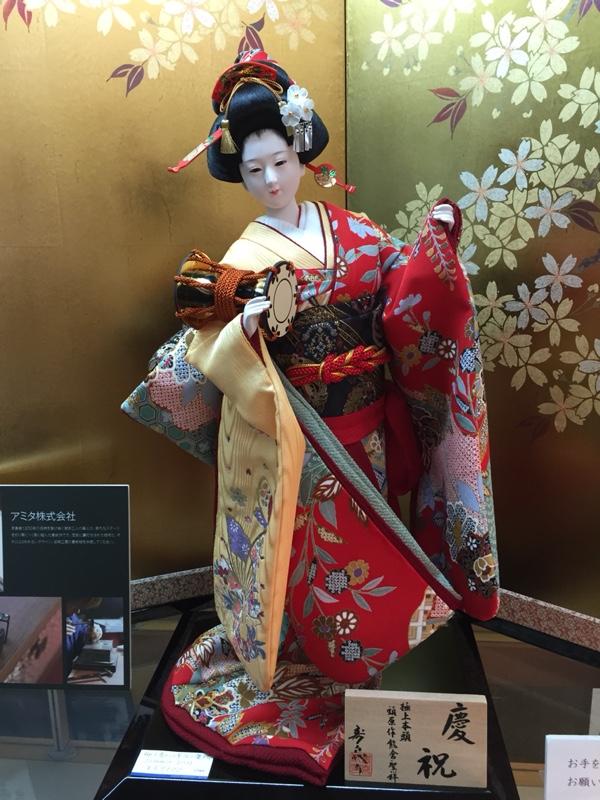 Such beautiful tiny embroidery on this maiko’s dress, she had a price tag of AU$800, and I can see why.  We saw lots of dolls similar to this style, in the tourist stores down the main street in Gion and through various Tokyo outlets, but nothing to the quality or standard.
I haven’t seen anything quite like this doll (below) anywhere else we have been so far – so much work and so much detail.  He has a AU$500 price tag and stands only about 25cm high, but you can see how much work has gone into making each and every piece of his costume. 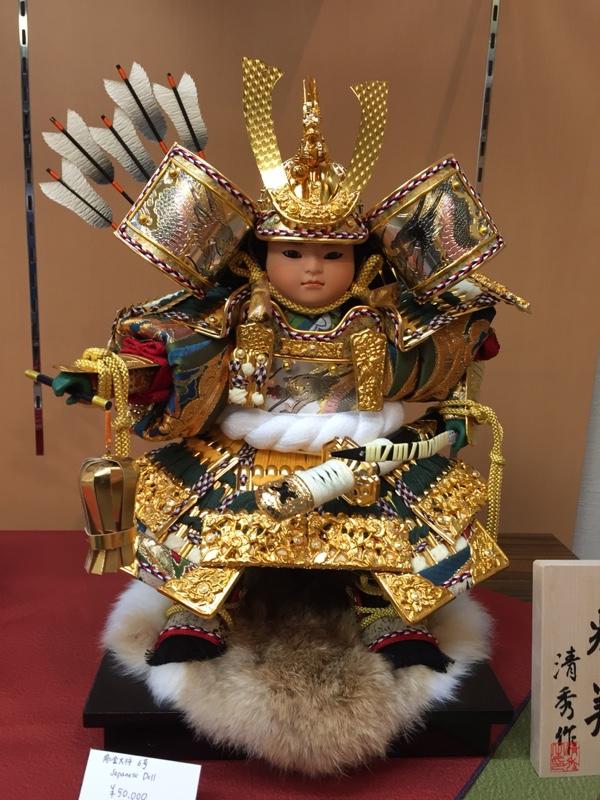 I absolutely adored this suit of armour – and thought it would look very well in my living room.  😉  I also thought it would appeal to my friend Nathaniel – and if I had the spare AU$70,000.00 on the price tag I would have found some way to get it home! 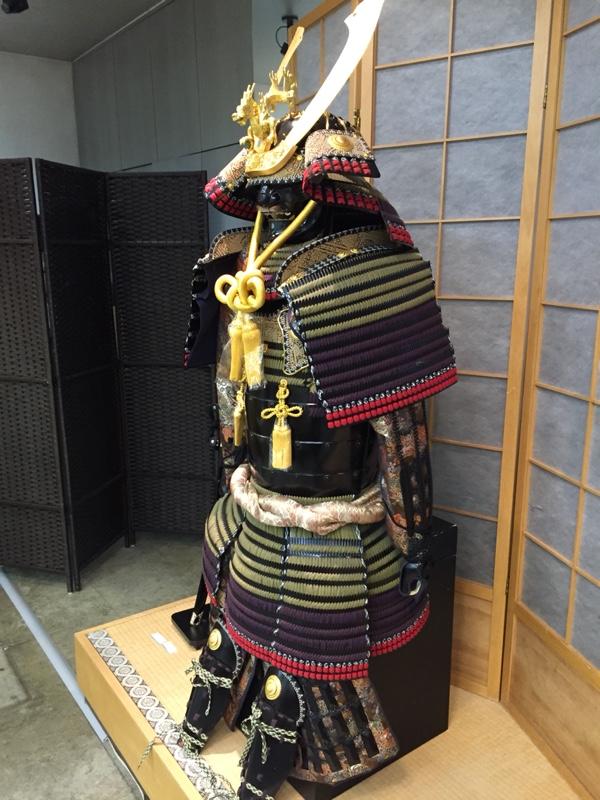 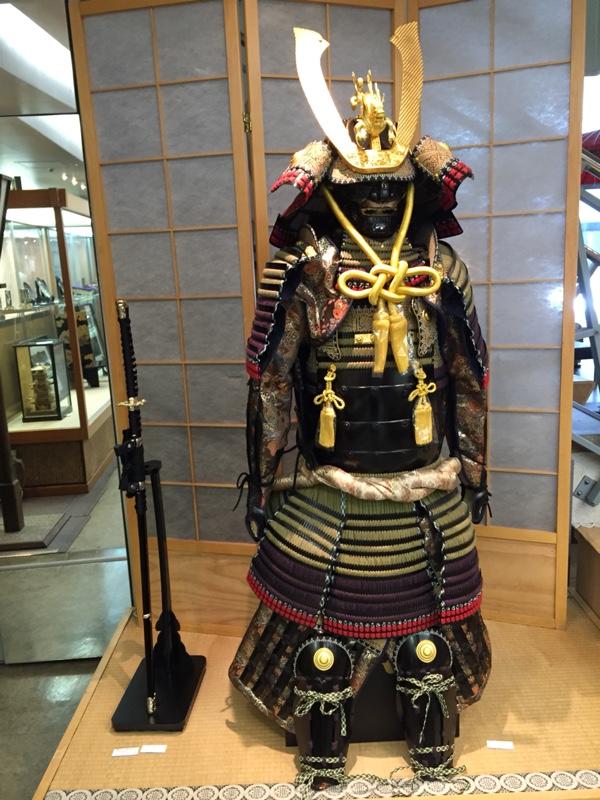 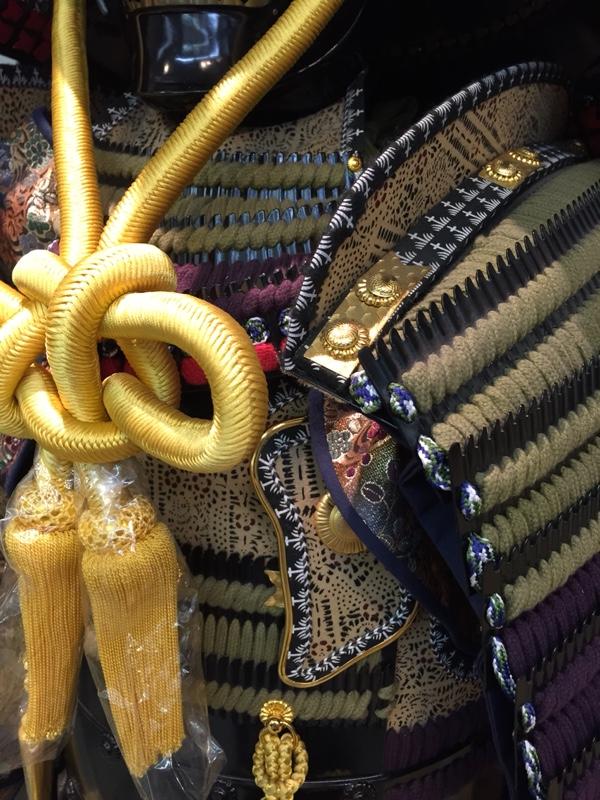 There was also a range of swords for sale – though unfortunately I was unable to read the information on the tags other than the AU$10-15,000 price tags.  I would love to know a bit more about them but, compared to Tokyo, the customer service staff seem to have very little English so we have to just suffer in our ignorance.
*another self recrimination for not having spent the last six months learning conversational Japanese* 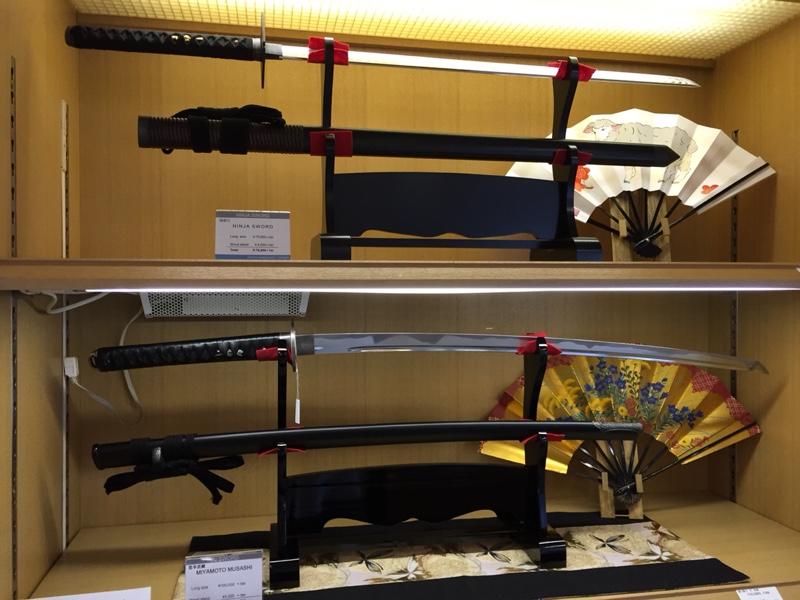 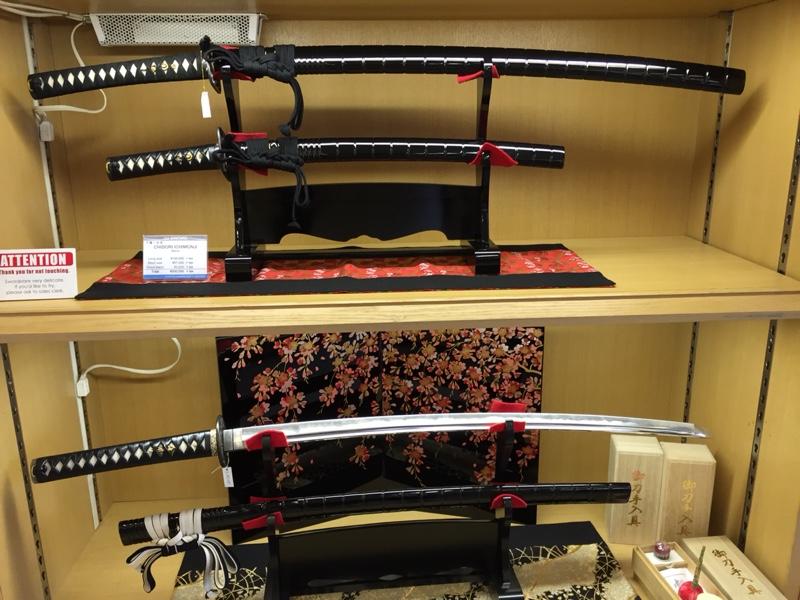 The Handicrafts centre also had a great deal of lacquerware on sale – mostly bowls, boxes, sake sets, various  serving dishes and these rather shiny and beautiful little dust gatherers… at about AU$100 each they were probably one of the only things I could afford in the store!  😀  But I really don’t need little lacquerware dolls.
I found out in the lacquerware actually came to Japan from China with the adoption of Zen culture during the Kamakur period (1185-1333AD) and these items were treasured as ‘karamono’ (objects from China) and were displayed in major temples and homes. 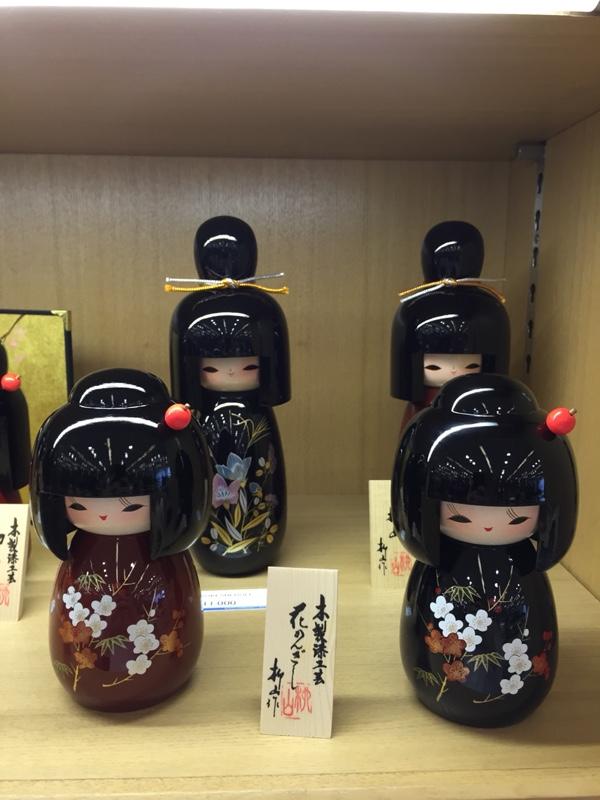 Also loads of ceramic ware including this lovely little tea set, and many small sake cups.  The sake cups with intricate designs on them started around AU$75 each and this tea set which is quite plain was about AU$400.  I love this sort of thing, but faced the same dilemma in Turkey – buying breakables is always a quandary… you have to nurse it all the way home or if you put it in your luggage risk opening your bags to smashed treasures. 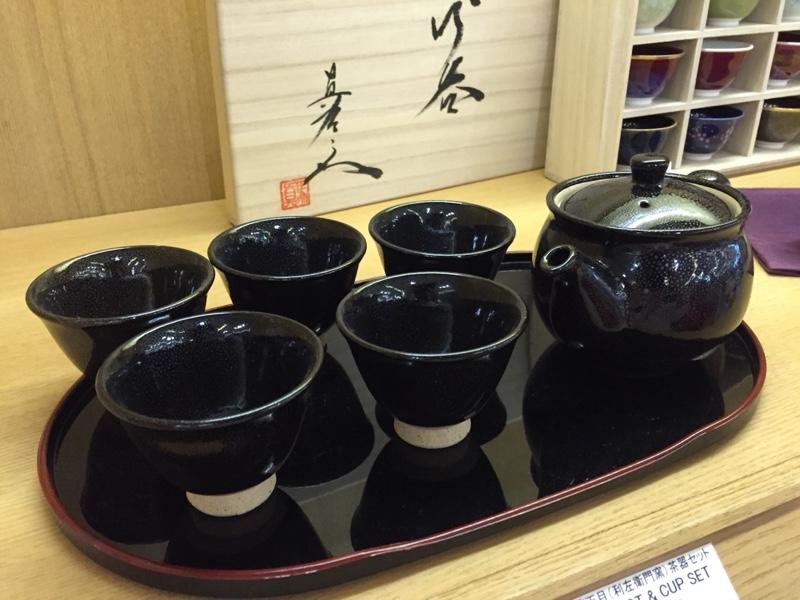 Kimono are the real treasures of Japan and they have been worn since ancient times.  They are made from several techniques – dying, weaving, painting with dye, stencilling and embroidery.  They have traditionally been made to ingeniously adjust to suit the hot, humid Japanese summers.  Different garments were worn in early summer, midsummer and late summer marking the fleeting seasons with specific forms of dress.  Summer kimono are either hitoe (unlined silk) or katabira (unlined ramie), with the former worn during early and late summer and the later worn in midsummer.  Japanese culture’s profound appreciation of the seasons can be seen in their kimono which employ colours, and designs that are evocative of the season for which the kimono was designed to be worn. 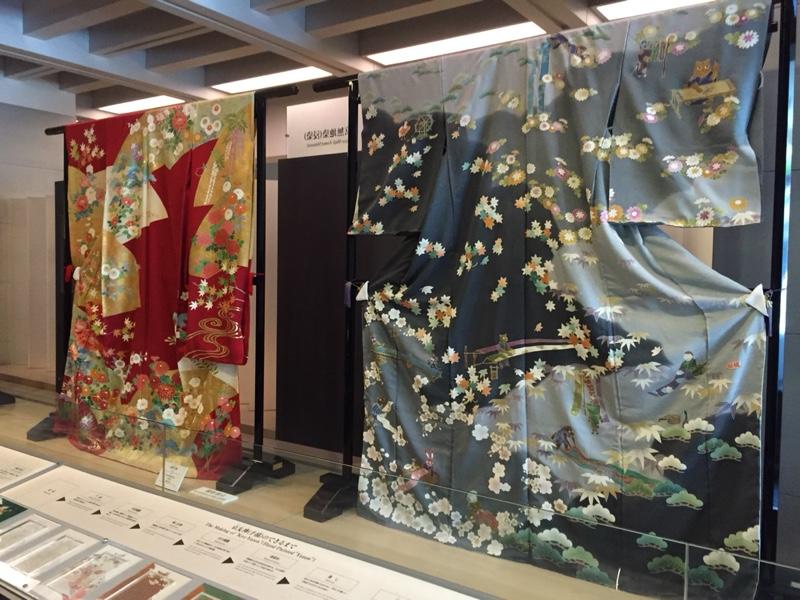 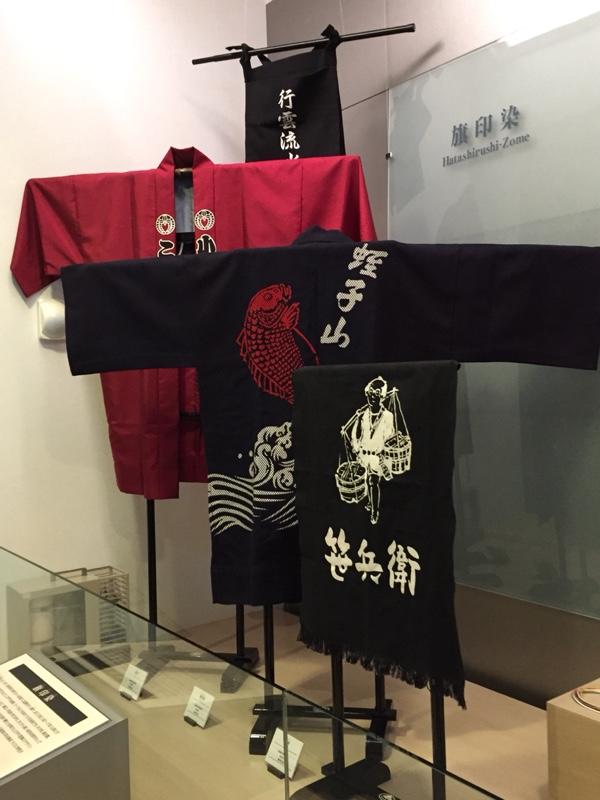 The paper lanterns that we have been seeing everywhere are called ‘chochin’.  They were first used during the Muromachi period (14thC – 18thC) to light the way when walking at night.  The Chochin did not become common in Kyoto until the Edo period (17thC – 19thC) when they were starting to be produced en masse for the Shinto Shrines and Buddhist Temples in the regions as religious adornments.  Today they are used as decorations and religious adornments and are made using a method called ‘ipponkake-shiki’ in which individual pieces of bamboo are connected in a circle to serve as the lantern’s frame. 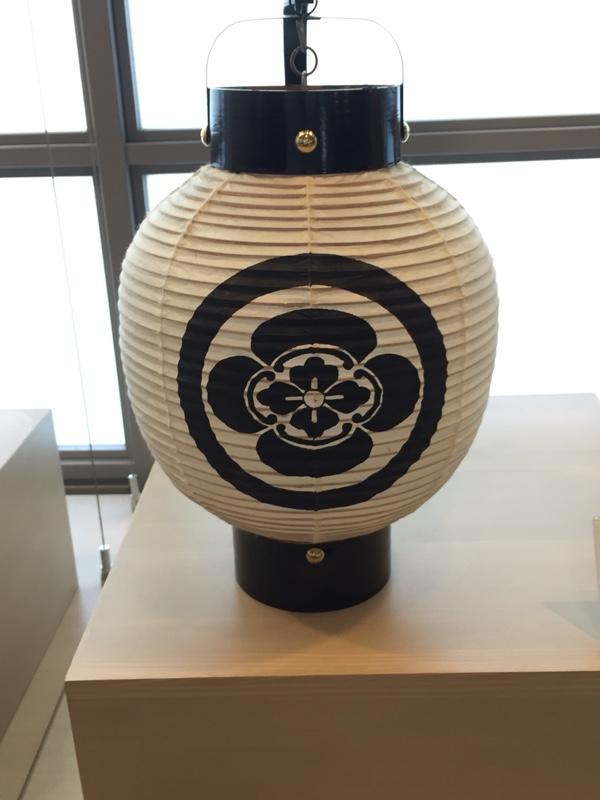 Nihonshu – Japanese sake!  Blessed with good quality water and a climate ideal for making sake, Kyoto has a long and distinguished history as a major sake producer.  A sake producing bureau – the ‘Mikino-tsukasa’ – was created within the Imperial Court during the Heian period (8thC-12thC) and produced sake using the most advanced technology of that era.  The skill and knowledge of sake production eventually spread to Kyoto’s outlying areas and Fushimi also became a well known leading sake producing area.  After the Meiji Period, theopening of the Tokaido Line railway allowed for Kyoto and Fushimi to produce and distribute sake all over Japan, and they reamin the two most prominent areas for sake. 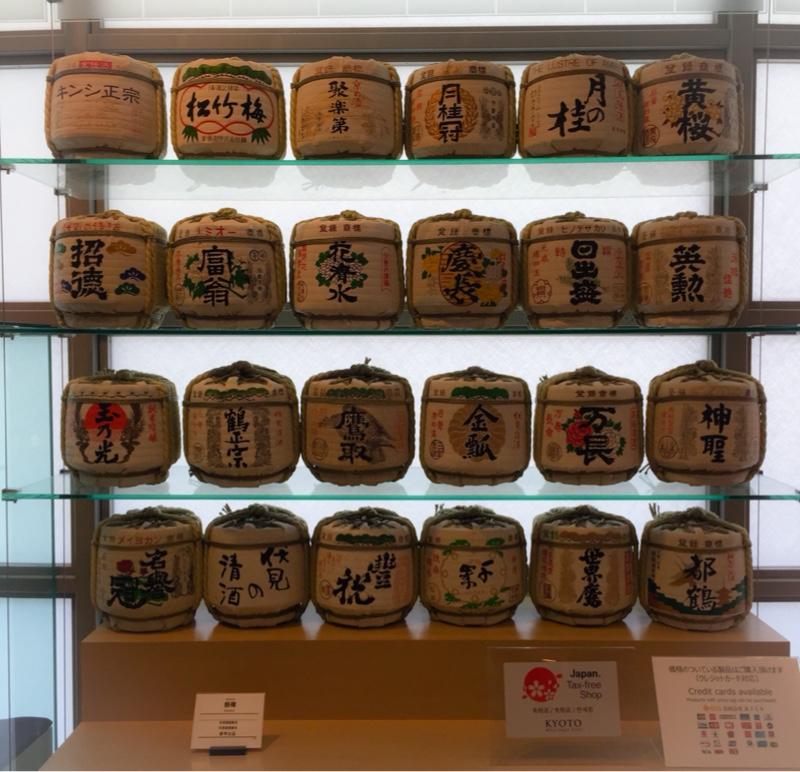 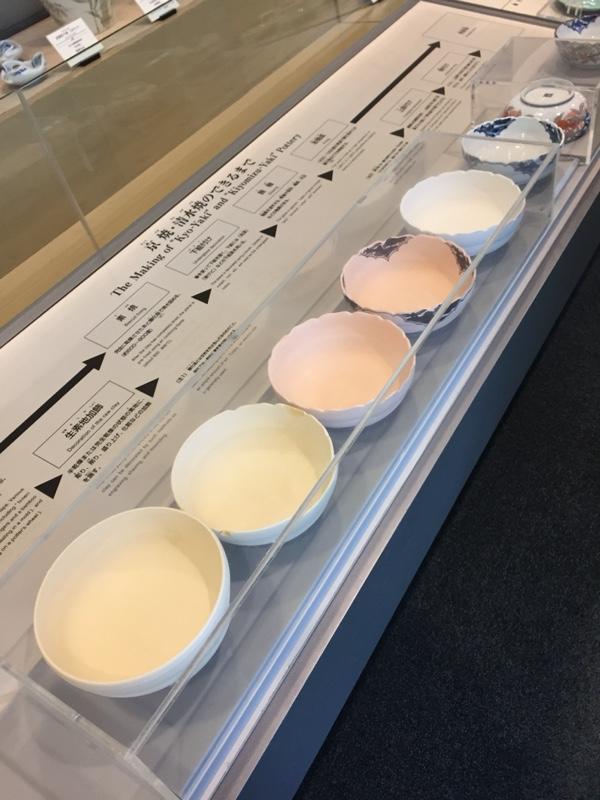 Woodcarving, gilding and painting… this is the technique used on a lot of the temples, gates, shrines and other significant buildings done in traditional architectural styles.  You can see how a flat piece of wood is carved, then lacquered, then gilded, then painted for dimension and effect.  I’ll come back and add a picture of this in situ somewhere when I hunt down a good example.  It was used in buildings and on furniture. 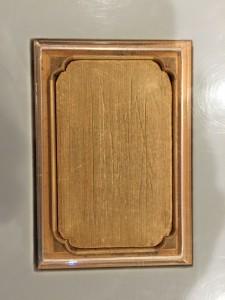 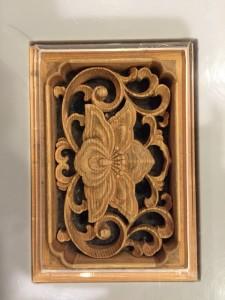 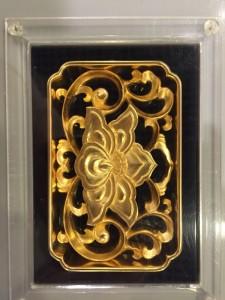 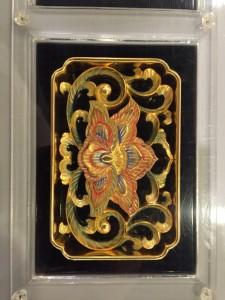 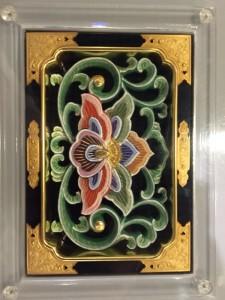 Like this piece… the coloured paintwork is hard to see with the sheer amount of gilded wood and plated metal work added to it, but this home shrine demonstrates these woodworking/lacquering/gilding and painting techniques. 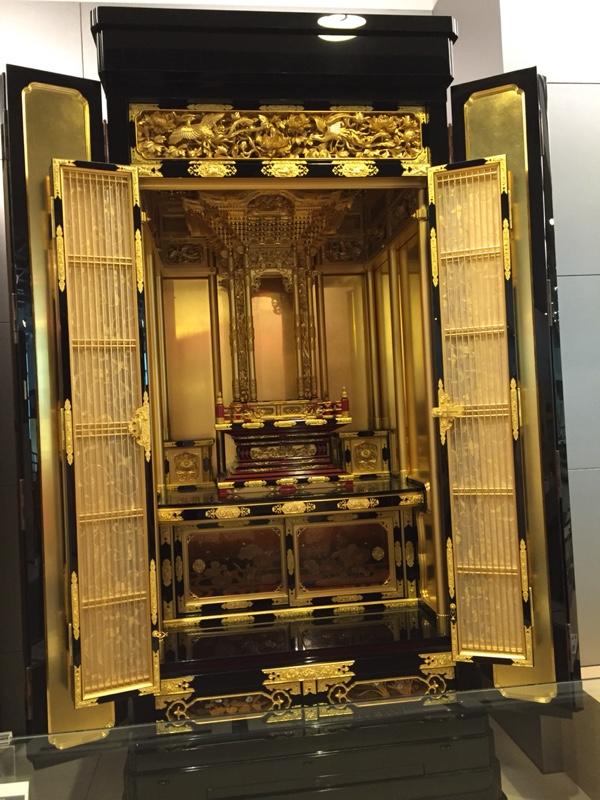 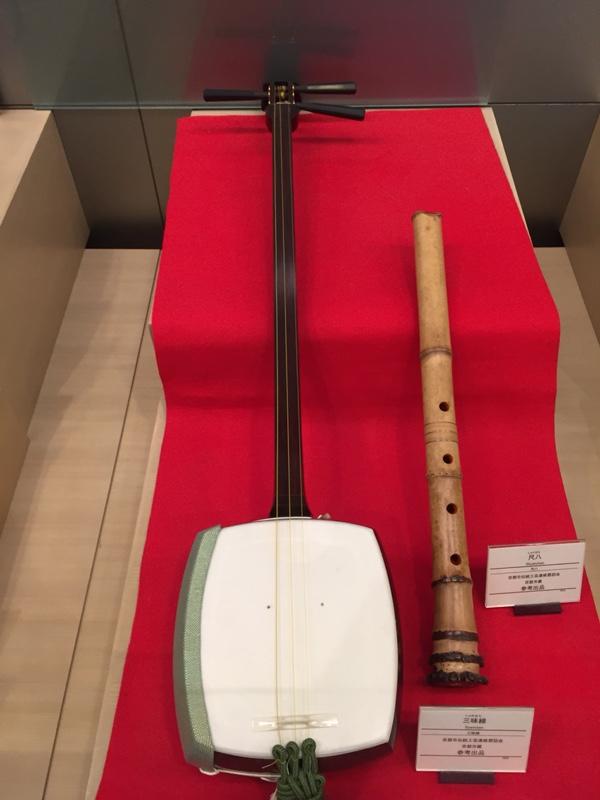 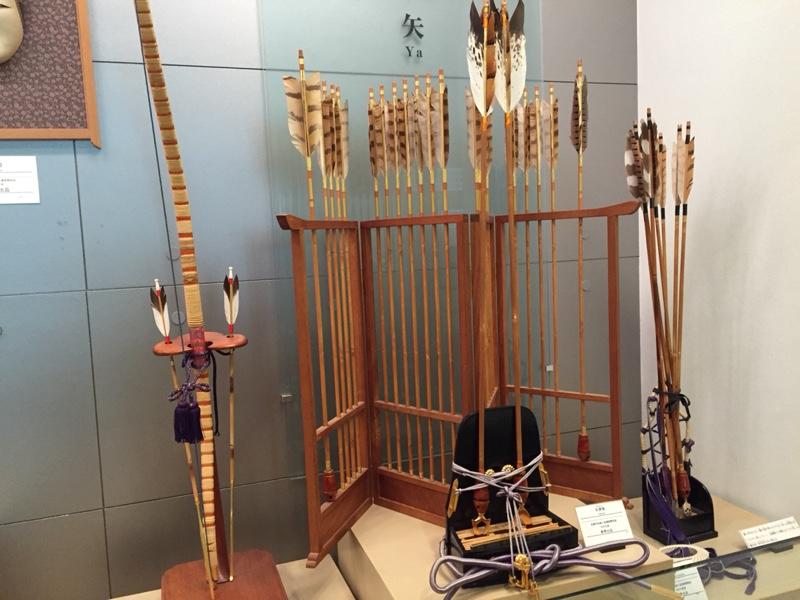