I don’t usually shoot the Pig and Plate competition and when I got there I realised I had forgotten what the rules and course of fire were for this particular comp.  Unfortunately, our local website doesn’t contain info that would let me know what to expect before I turned up.  So I am writing it up here in case it is another two years before I turn up!

The Pig and Plate is a metallic silhouette competition with targets set at 15 meters, 25 meters and 50 meters.  It is shot with the shooters choice of centre fire handgun.  The competition is clearly designed with revolver shooters in mind, as each row of targets is designed to be shot in a series of six.

Upon approaching the line, each competitor will have a spotter to perform safety cross checks, ensure the course of fire is completed correctly, and tally your score.   The range will be called open and shooters will be instructed to load their first six rounds (either directly into the chambers of their revolver or by feeding in the first magazine).  A siren will sound and the shooter will have ONE MINUTE (which is actually a really long time!) to shoot the follow sequence:

The first sequence must be shot left to right with one shot at each target – first the five plates in the front row, and the sixth plate which is set to the right of the second row of silhouettes.  Each competitor shoots once only at each plate, and must move onto the next target if a target is missed. 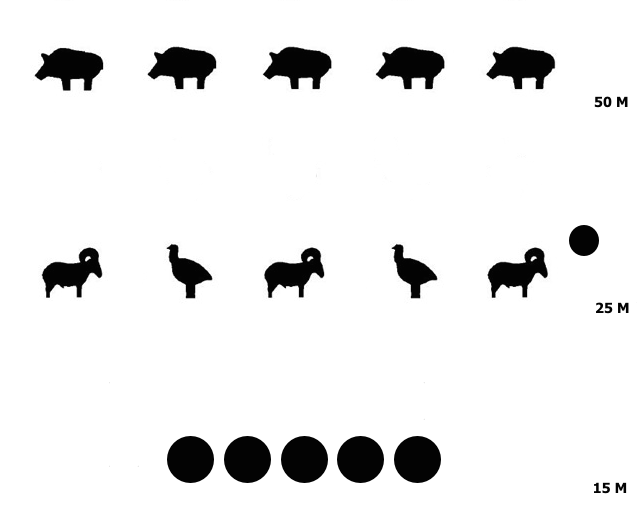 *Note that the plate at 25 meters has been drawn smaller – it is not, it’s just further away!

Scoring is as follows, 10 points for each plate knocked over, 30 points for the ‘bonus’ plate at 25 meters.  10 points for each ram, turkey or pig target that is knocked over.  A perfect score for a shooter on completing the first round would be 180.
Each shooter has three opportunities to shoot the course of fire, and scores from each round are combined to give an aggregate total.  A perfect score of three perfect rounds would yield a maximum score of 540.

It is a great fun shoot.  Will be there again soon, I hope.