So, after asking my friends for suggestions of what I could load up on my iPad to watch on the stupid long haul flight from Australia to Los Angeles, (and after ignoring their suggestions of Idiocracy and Scott Pilgrim type crap), I have compiled the perfect list of in flight movies.

Firstly we have this little pearler of a plane crash film that sees Dennis Quaid, as Capt. Frank Towns in Flight of the Pheonix.  A quaint little story about a band of misfit oil rig workers whose C-119 cargo plane goes down in the middle of the fucking Mongolian, Gobi Desert.  They face brutal conditions, sandstorms, violent winds, survive an attack by desert bandito types, eke out their survival with limited resources and end up deciding they have everything they need in their wreck of a plane to build a new one (totally plausible).  Frank and the navigator guy whose name I’ve forgotten, end up also struggling to maintain order with these over-pumped wrench jockeys who all turn out to be bloody useless and cowards to boot, while those potentially most likely to be ‘voted off the island’ display surprising skills and strength.  For the record – not a great film, but the plane went down and “they’ll all be ‘rooned”, said Hanrahan, so I’m including it. 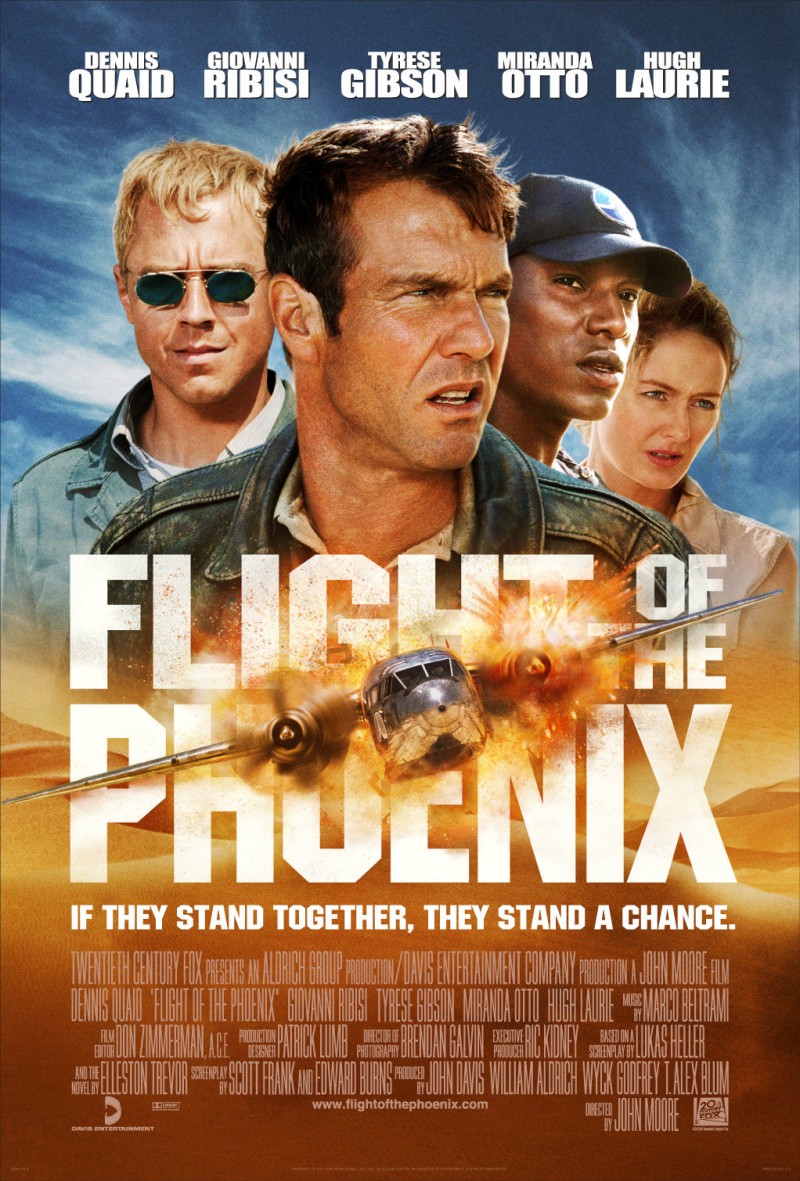 Next we have Alive, the incredible TRUE story of the Ugandan football team whose plane crashes in the Andes Mountain range in 1972, and of their intense will to survive and the unbelievable lengths they will go to sustain themselves on their meagre rations through freezing cold, extremely harsh conditions.  Starring Ethan Hawke as everyone’s little ray of sunshine, Nando Parado, (‘What’s so good about hope?’) they are eventually forced to cannibalism in order to survive months of isolation.  Alive is a rather harrowing and somewhat disconcerting look at what people are prepared to go through when push comes to shove, and their own survival is on the line.  It’s one of those films that claims to stereotypically be a ‘triumph of the human spirit’, but basically all you end up thinking about is the fact that they fucking ate their friends.  Ewww! 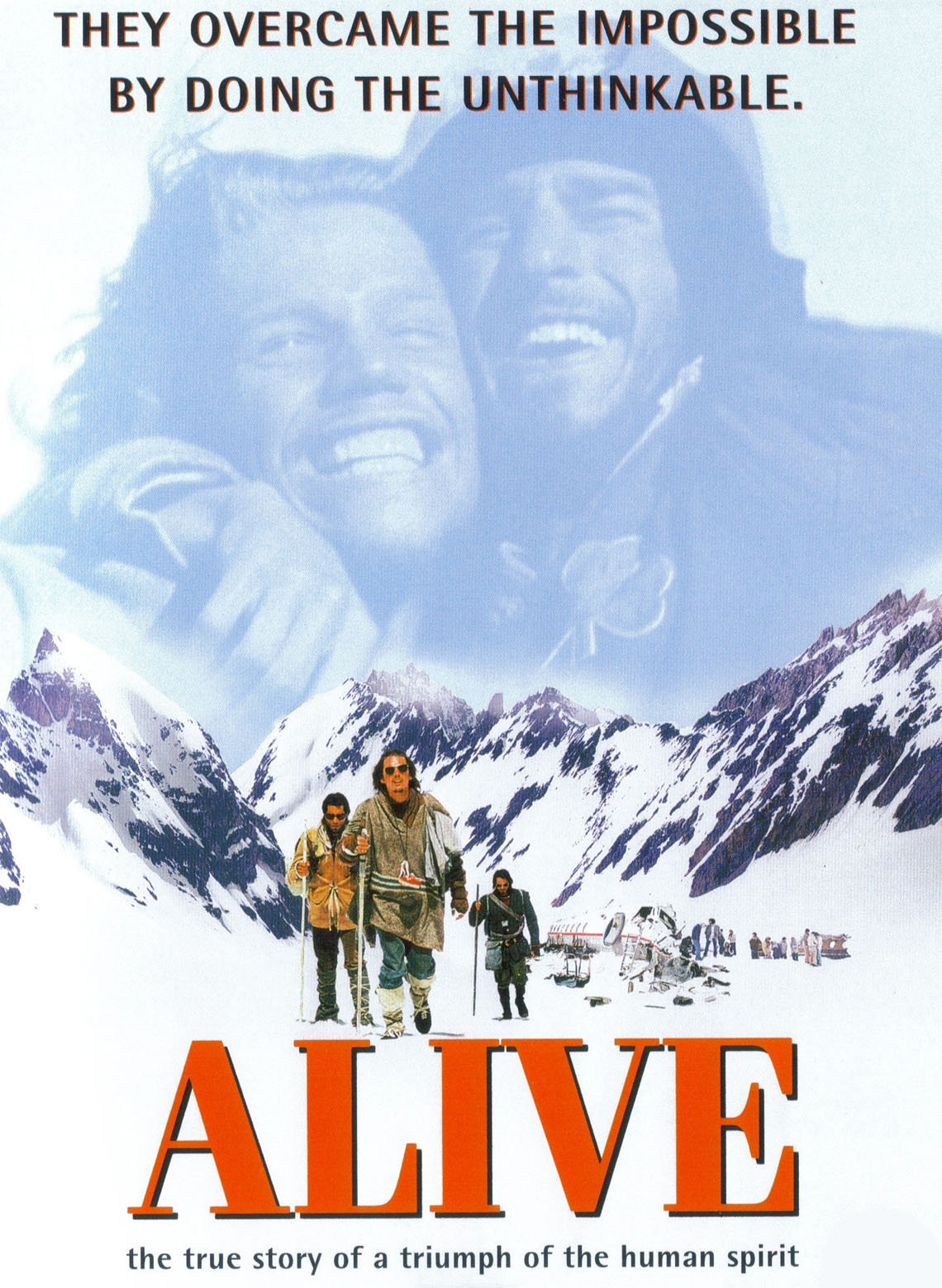 So, we’ve had the dry, scorching desert and we’ve had freezing mountain peaks… next of course we get the deserted tropical island with Cast Away.  Starring your favourite character and mine – Wilson the volleyball, who as we all know was the star of the show.  Oh, okay, the cast also contains Tom Hanks and Helen Hunt.  Chuck Noland (Hanks) is a Fed Ex executive who finds himself trying to survive after (yet another!) plane crash which leaves him marooned on a desert island.  He finds himself ‘physically and emotionally tested to survive’… dum! dum! dum!  Physically he seems to hold up okay, give or take a few minor injuries, (we’ll just ignore that whole DIY dentistry bit), but mentally?  Well a man who engages in a war of wits with himself is eventually going to lose the plot at some point, which is right about where Wilson comes in handy… get it?  Handy?  *slap*  I kill me.
Meanwhile, back at the ranch his GF (Hunt) thinks he’s dead (if wishing were to make it so) but he eventually turns up alive, and – awkward! 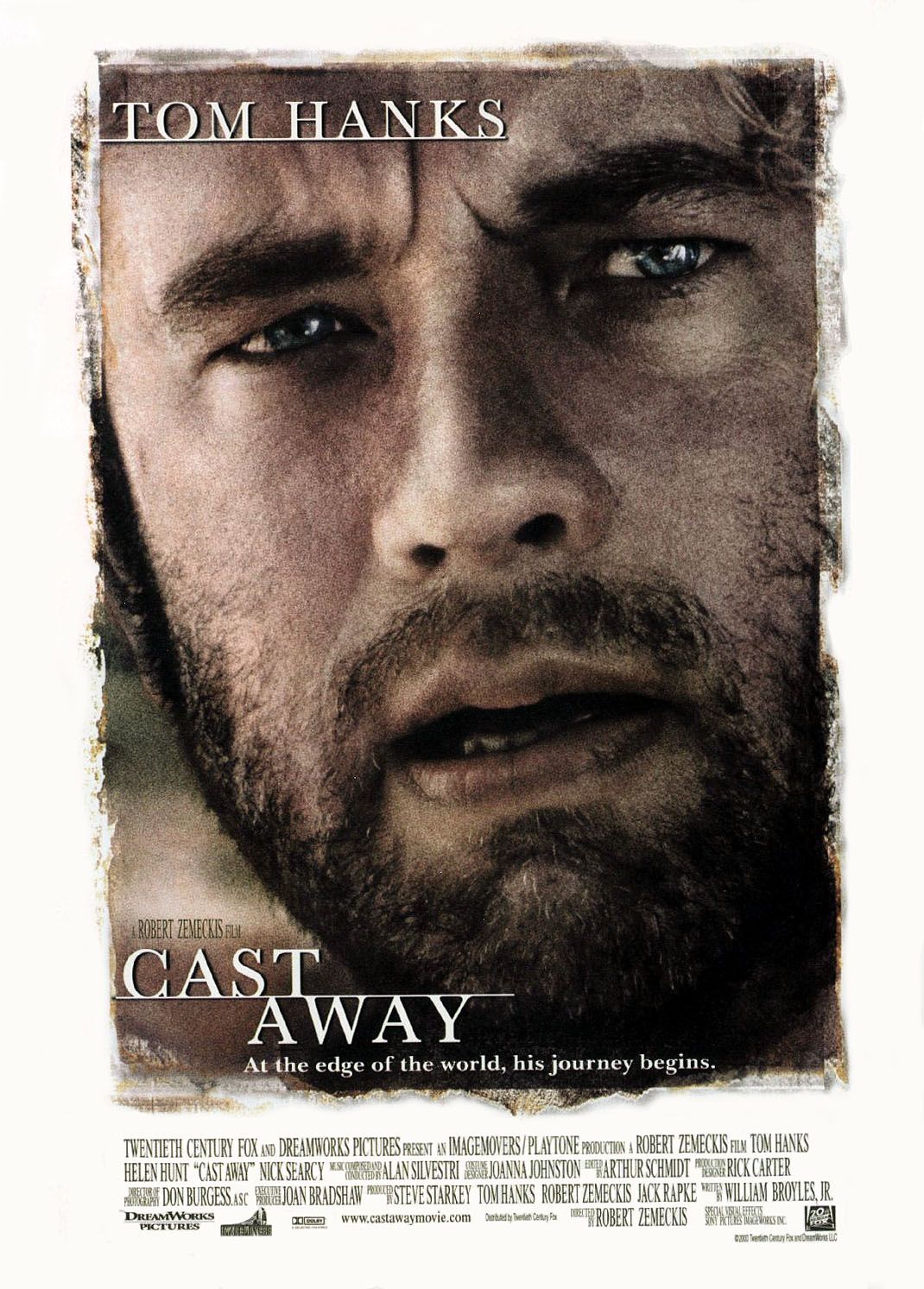 After that we have what appears to be the most obvious choice, as nominated by my friends, Snakes on a Plane starring Samuel L Jackson.  The only thing I know about this film is that Jackson utters the eminently quotable line: “I have had it with these motherfucking snakes on this motherfucking plane!”  And that is literally all I know about this film… because I saw the trailer, immediately thought the plot was fucking ridiculous, the characters looked like pathetic cardboard cutouts and promptly decided that there was no way, no how that I was ever going to watch this B-grade piece of shite.  And I’m still not going to see it.  But, meh.  It’s on the list because several persons (who shall remain nameless) seemed to think it would make excellent in flight viewing.  A-huh, yeah right.  It’s all yours. 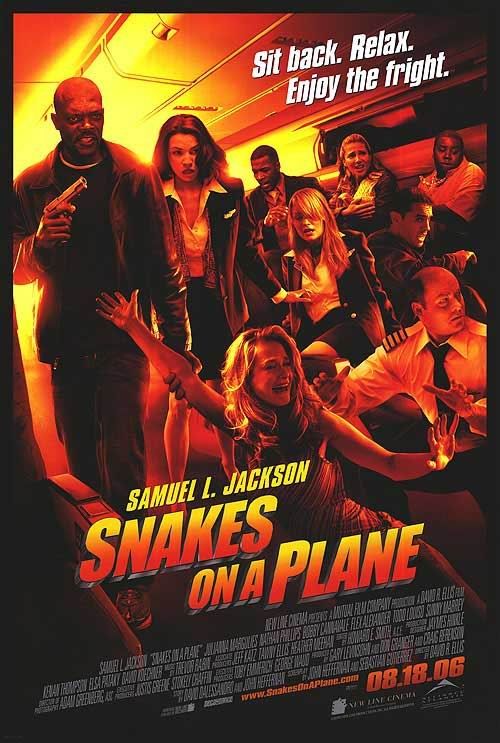 And who could forget, Nicholas Cage, as Cameron Poe, the recently paroled ex-Ranger (who accidentally killed a guy while defending his wife from violent thugs), and John Cusack as the fast talking, US Marshall Vincent Larrkin, as the unlikeliest of allies in Con Air?  Poe is on a prison transport flight on his way to freedom (and to see his cute daughter for the first time) when the plane gets taken over by some very savvy and slightly psychotic criminal types, including the awesome John Malkovich as Cyrus the Virus and an extremely creepy Steve Buscemi as Garland Green (remember that scene where he is playing dolls with the little girl and you’re sitting there freaking out that she’s going to end up dead in a ditch?  Argh!).  The prison plane, being controlled by prisoners, ends up as ill-fated as you expect, plenty of death destruction and mayhem.  Add in a flying car and you have fun for the whole family.  If for no other reason we love this film for the dialogue lines Cusack gets, as he explains the word, ‘garrulous’ to a somewhat confused, Colm Meaney.  There ain’t nothing sexier than John Cusack with a massive… vocabulary! 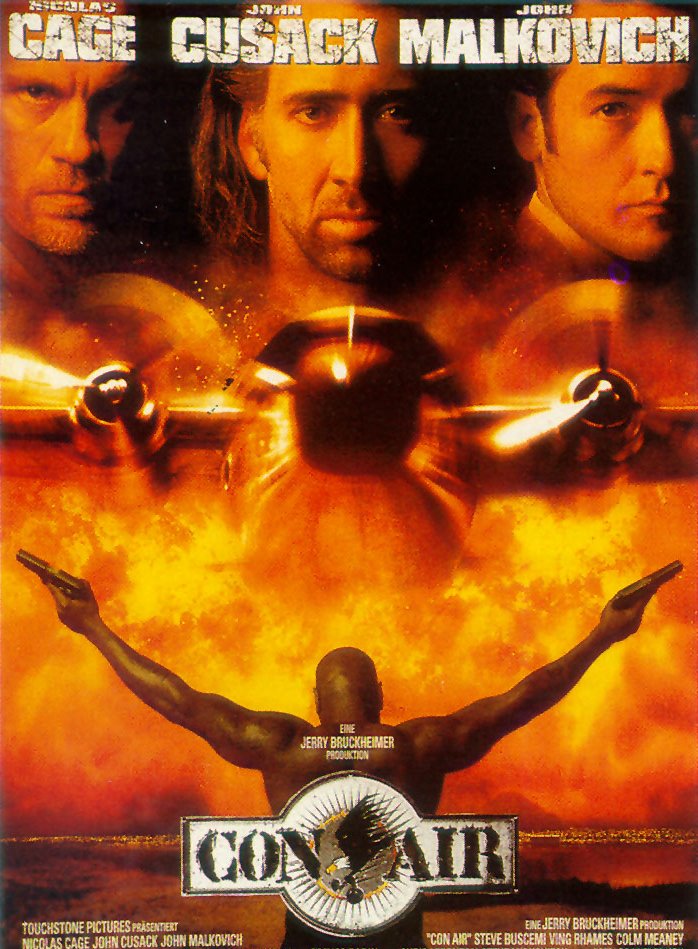 Then there’s TOP GUN!  One of the ‘greatest aviation movies of all time’ according to the much lauded movie critic, Ms Kahlia.  And she’s 100% right – who doesn’t love an aviation movie full of fast motorcycles, boozing up, shagging the boss lady, Great Balls of Fire, and some half naked Maverick (Tom Cruise) and IceMan (Val Kilmer) playing volley ball on the beach…. *thousand yard stare*  What were we talking about again?  Oh yeah.  Top Gun.  Planes.  There were some.  Maverick and IceMan (plus offsiders, Goose and ) are duking it out to be the ‘best of the best’ at Miramar.  Unfortunately things don’t always go to plan and Maverick and his offsider Goose (Anthony Edwards) have a bad training run – ‘Goose! Goose! Goose! We’re in a flat spin, we’re going down! – and Goose dies (awww 🙁 ) crashing a $30million dollar jet, but everything works out in the end… 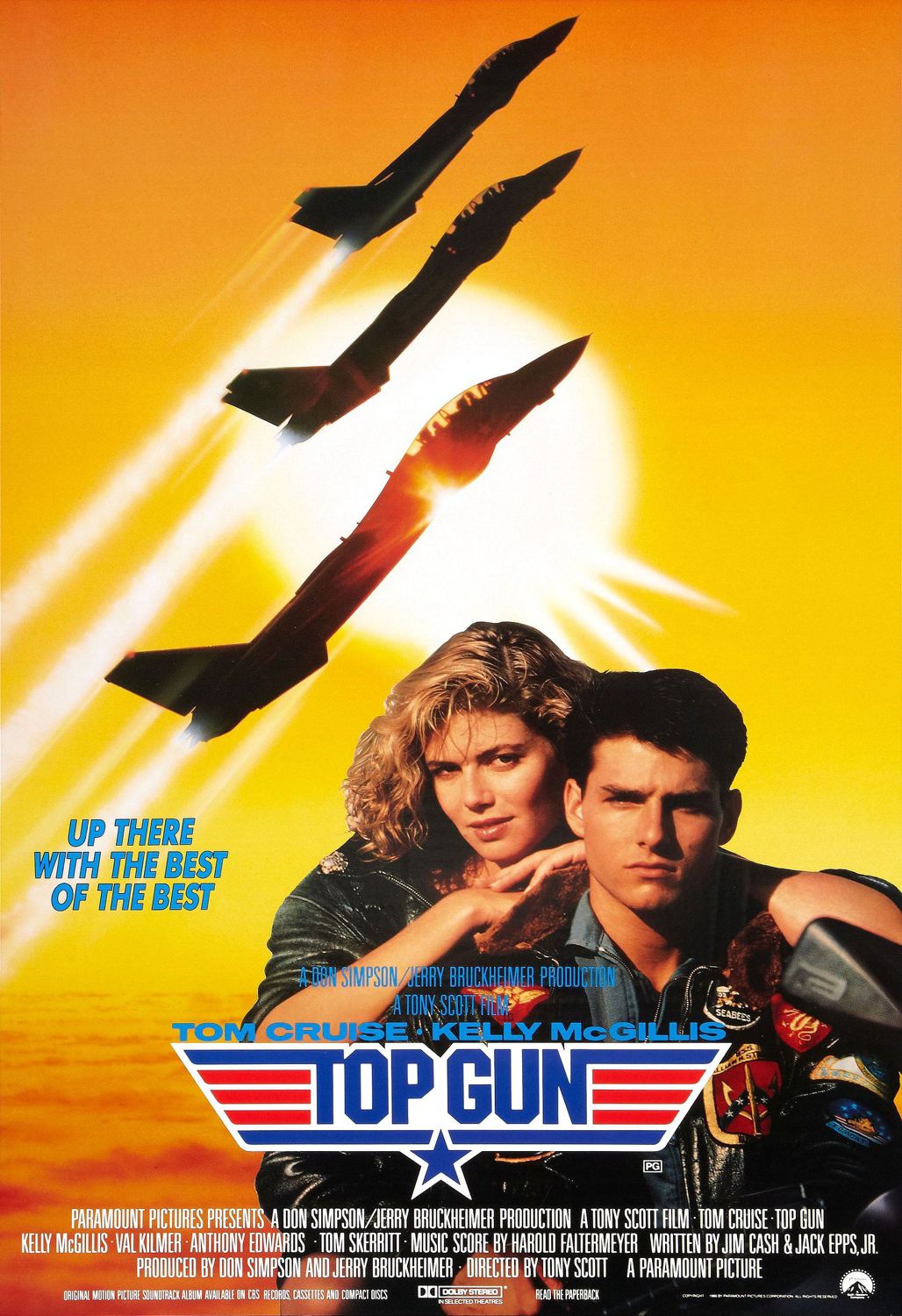 Another absolute corker for pre-flight or in-flight viewing would have to be one of my favourite movies ever – Pushing Tin.  Now, none of the planes in this film actually crash, (most of them are just little green blips on a screen), but there’s nothing quite like this film for ramping up the pteromerhanophobia!  John Cusack and Billy Bob Thornton are Nick Falzone and Russell Bell, a pair of chalk and cheese air traffic controllers, with an out of control obsessive compulsive, self destructive career rivalry going on.  Falzone is totally wired and edgy, whereas Bell is so laid back he’s damn near narcoleptic, yet they are both completely dysfunctional, testosterone fuelled, adrenaline junkies playing chicken with 100’s of 1000’s of tonnes of air borne steel, and for added shits and giggles – shagging each other’s wives! Just the sort of morally flexible psychopaths you do NOT want to think of as being in control of your flight! 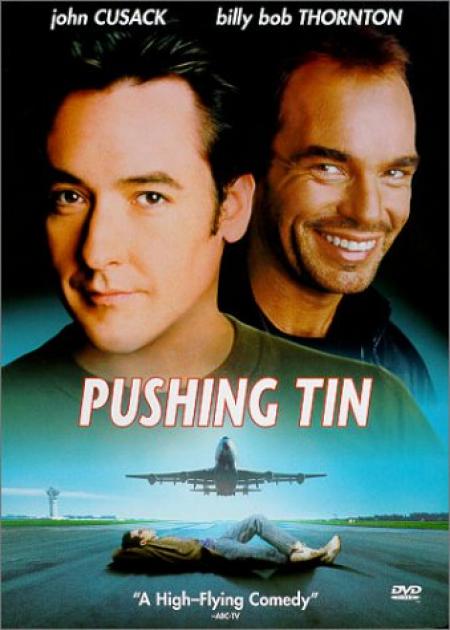 Coming in at the Number 37 in the list of Most Desirable In-Flight Films of All Time is The Grey, starring Liam Neeson as the extremely skilled, extremely gruff, and extremely deadly survivalist professional hunter dude, Ottway, whose plane crashes in the Alaskan wilderness leaving him to defend himself and a group of (wouldn’t you know it!) useless, ingrate, oil rig workers (again!) from a pack of ravenous wolves.  The Grey sees this unlikely band battling extreme weather, extreme stress, extreme sleep deprivation and extremely scary fucking wolves.  Let’s just face it – this movie is just extreme all round, man!  Highly recommend not letting kids watch this or they’ll be pissing themselves the next time they see some piercingly pale eyes staring at them from a big fluffy Husky at the dog park.  Other than that, the movie has a surprisingly philosophical bent and of course does contain some scary crashing airplane shit, making it eligible for inclusion on this list! 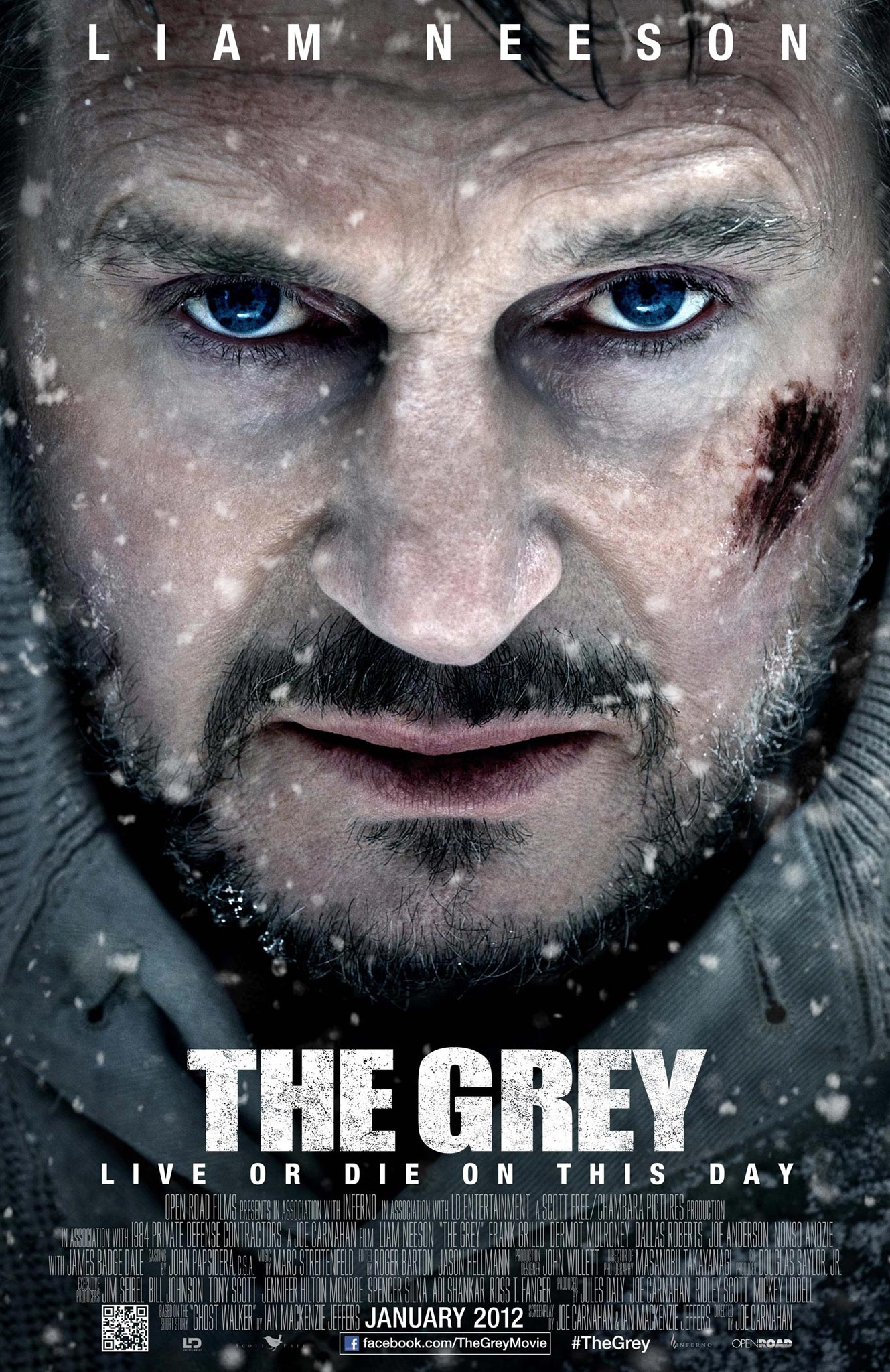 And finally, the Number One, Shit Your Pants, In-Flight Film as got to be Flight, starring Denzel Washington as the doped up, washed out, Capt. Whip Whittaker who manages to keep a busted ass aircraft from crashing into a civilian population, by keeping his head together and pulling out some crazy ass flying stunts to prevent all 108 souls on board from plummeting to their death, all to a kick ass soundtrack.  Hero status ensues, rapidly followed by corporate buck passing as all involved attempt to place blame for the incident.  Everything about this movie screams ‘Don’t watch this before you fly!’, it’s tantamount to watching the Poseidon Adventure before going on a cruise holiday, but if you think you can stomach the potential anxiety, it’s probably better than watching twenty aircraft safety announcements for convincing punters that they really should keep their seat belts on at all times when not moving about the cabin! 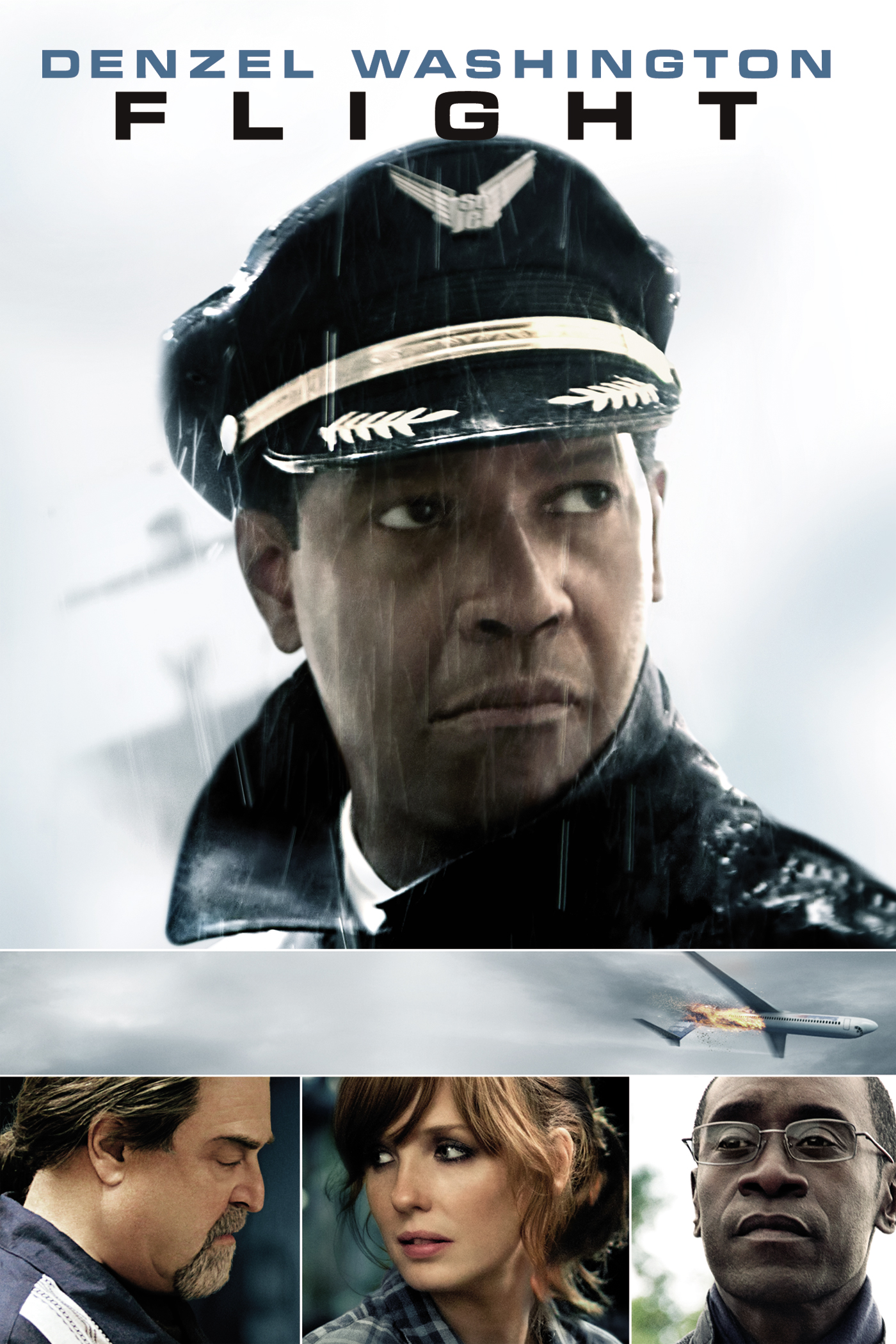 Well, Flight is my Number One for now at least… until we get a chance to see Non-Stop staring the wild eyed, would-be-patsy air marshal, Bill Marks, played by Liam Neeson again (Love you Liam, but you gotta stop with these desperate, devil may care, kickin’ arse and takin’ names action hero roles)… This one looks pretty terrifying as air disasters go, and seeing I am flying on Saturday, I reckon the only sensible thing to do is go see it Friday!

One thought on “In Flight Entertainment”