Many, many, many moons ago, way back before the days of Youtube movie trailers at your fingertips, that takes some of the hit and miss out of movie going…  Myself Mr K, Eduardo, and my little sister went to see a movie called Breaking the Waves that was getting great reviews in the newspapers.  We could only find it playing at a strange little independent theatre in East Brisbane (that place is some sort of martial arts dojo now) as it wasn’t showing in any mainstream theatres in the area.  My elder sister, BigSal and her boyfriend at the time, Woliver, were supposed to have joined us but had cancelled at the last minute… lucky them! 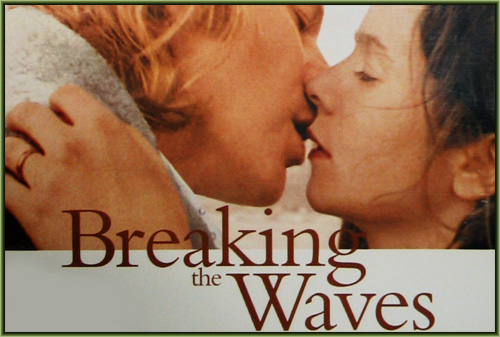 We bought our cokes and popcorn and found some uncomfy chairs and then sat through THE most tedious three hours of cinema of our entire lives!  Well, some of us did, Eduardo had the good sense to fall asleep by about the third ‘chapter’ learning on my shoulder and occasionally snoring.  It was, and remains, one of the most bizarre films I have ever seen.  My recollections were of a disjointed and jarring narrative featuring an extremely annoying and naive quais-bipolar girl who was fond of talking to herself, that marries an indifferent, crude sort of man who works on oil rigs in the North Atlantic somewhere and is gone for long periods of time.  Readers Digest version of the plot is – he ends up paralysed and starts making unusual sexual demands of her to satisfy his lack of ability to perform for his young bride.  She in turn being very malleable and well, stupid, goes about looking for random men to fuck so she can come back to his beside and report her antics.

Being such a hideously tedious film and seeing that a misery shared, is a misery halved; we, four of us made, a pact to tell BigSal and Wolliver that the film lived up to it’s critical acclaim and was ‘amazing and unbelievable’ and that they ‘simply had to go see it’… largely because we could see no reason why we should have been tortured thus and that they had fortuitously managed to escape the horrid experience!  The following week they went to see it in due course, and apparently spent the entire duration thinking, ‘Hmmm, it’s okay… but we don’t quite understand why the others were raving about how good it was’.

Yes, it was a bit of a cruel joke but, it simply had to be done!  When we finally caught up after they had seen the film, their thoughts were roughly, ‘Well, we thought it was good… but we didn’t enjoy it as much as you guys obviously did’.  At which point we blurted out how much we hated it!  And oh my God, how tedious were the ‘chapter’ breaks that broke up the segments of the film with oddly quaint static landscape views set to ’70s rock anthems that all seemed to play just a little bit too long?!

Some fan (read: weirdo) has put the ‘chapter’ breaks together in a compilation on Youtube… that, even taken by itself, is kinda window-lickin’ special.

Ever since, Breaking the Waves has become the common benchmark around here for being THE WORST FILM EVER in our collective memory!  A film to compare all other crap films to, and an in-joke that has been periodically trolled out when occasion warrants.  Anyway, a few months ago we thought that maybe we should give it another chance (yes, this may have been an alcohol fuelled decision!).  We are all 16 years older, and hopefully wiser, so perhaps we’ll have a greater understanding and appreciation for Von Trier’s vision by now.  So we organized a movie night and decided we were going to sit through the whole thing over again, come hell or high water!  And we discovered a few very interesting things –

1) Absolutely NONE of us had any solid recollections of the storyline or the plot or any understanding whatsoever of what was driving the plot, nor could any of us even remember how the damn story ended!

2) We had little to no recollection of the background of each of the main characters, the motivations for their various actions and had completely judged all the characters totally differently back then than we did on this more recent viewing.

4) And the most alarming discover of all… Wolliver (and to a lesser extent, Mr K), have a mysterious and inexplicable ‘thing’ for gold lame hotpants, which do NOT feature in this film in any way shape or form!

Viewing this film for a second time, with the benefit of maturity, hindsight and experience, we found ourselves coming away with a greater appreciation for the film’s complexity and the nuances of its flawed characters.  We also concurred that Emily Watson’s portrayal of Bess was actually due the acclaim accorded to it at the time, as it seems a challenging role to play someone so damaged, slightly psychotic and yet naive and sheltered in a film filled with challenging sexual practices and perceptions.

Having said all that… it remains, in my humble opinion… still RIGHT UP THERE IN THE WORST FIVE FILMS OF ALL TIME!  And I have now devoted nearly six hours of my life to it that I will never get back!