I went out earlier and pulled into the local shops to pick up some things for dinner tonight only to find that the entire car park was full and the only two disabled car parks were both taken up by two vehicles neither of which are displaying the required Department of Transport parking permits to legally use those spaces.  Fighting down the urge to key the inconsiderate bastards, this then meant I had to park underneath the building and go up a long flight of stairs to get to the shops.

Now, I have been issued with a Dept of Transport Parking Permit because, well, I’m a fucking chronic pain sufferer who has a lot of difficult walking without exacerbating my pain problems.  I also have trouble standing up for more than five minutes which has the rather unfortunate consequence of causing me to hold my breath against the pain, go red in the face and feel like I am going to pass out.  My other major mobility impairment relates to traversing flights of stairs or inclined ground… this literally makes me throw up!

Sometimes into the nearest garden, sometimes into a gutter, and on several occasions, empty cardboard boxes at Bunnings (don’t ask).  This particular problem stems from many years of cyclical spasming pain which has in turn caused maladaptive muscular behaviour and has forced a bony spur in my cervical spine to protrude forwards in such a way that it drags along the back of my oesophagus, triggering a gag reflex and subsequently plenty of up chucking.  It’s not pleasant and I’ve learned to avoid stairs as much as possible over the last few years… because well, it’s kinda fucking inconvenient, not to mention embarrassing to be throwing up everywhere in public all the time!

The only time I use my Transport Disability Parking Permit is at Uni, because my old University campus was all up hill and down dale and impossible to traverse… and my new University campus is so huge I’d end up having to park miles away, and throwing up before every class is hardly optimal.  So, on the odd occasion in other public carparks where I am trying to avoid stairs, if I have no other choice, I will reluctantly use the marked mobility impaired parking spaces and clearly display my Transport Disability Parking Permit as required by law.

As I came out of the shops, I saw the offending driver and asked the woman as she was getting something out of her car if she had a Transport Disability Parking Permit to use the disability parking space where she had left her vehicle. The conversation went something like this:

‘Excuse me, do you have a Disability Parking Permit to be legally parked in that space, as you don’t appear to be displaying one.’
‘I didn’t even know it was a disabled parking space.’
‘Well, it is a space for people with mobility impairments and I just had to walk up a long flight of stairs because you are illegally utilizing the park.’
‘Well, I am leaving soon anyway and I didn’t know.’
‘Well, now you do.  So perhaps you could take more care in future.’

At which point the over coiffed, over made up, besuited, middle aged, mutton-dressed-up-as-lamb, car park hog went to walk off.  And as she did, I decided to take a photograph of her vehicle, you know… just for shits and Twittles, which gained the following reaction:

At which point she said the worst possible thing you can say to someone with a disability of any kind:
‘Look at you!  There’s fucking nothing wrong with you, you stupid lazy bitch!’ (Yeah, I have no idea why she was calling me names all of a sudden… I really hate that.  It just shows a lack of creativity and a decided lack of education.  Not to mention it totally ruins my natural inclination to argue with someone as I immediately peg them as someone with no common sense, no common decency, no useful discourse and a potentially limited ability to comprehend anyone I might say should I be foolish enough to use words of more than three syllables… meh).

I sighed in a resigned and somewhat exasperated manner and said ‘Just because you can’t see someone’s pain, doesn’t mean it doesn’t exist.’  And it was at this point that I uncharacteristically chose to disengage from the conversation because I didn’t have the energy for fighting with some inconsiderate, chicken fucking moron tonight (maybe tomorrow night?  Tonight however, I was just too damn exhausted from my torturous Latin exam today).  But unfortunately for the lady with the cheap crushed suit and the butt ugly shoes… it was too late.

Mr K had heard my conversation with this woman and knew it was a losing battle with a selfish, entitled priss, but at hearing her last statement, he literally flew into a rage, which started with something like, ‘How dare you speak to my wife that way you Fucking. Arrogant. Ignorant woman!?’.  No energy for this!  I started to walk away about now (down the problematic stairs in question) while Mr K and this woman traded barbed accusations and not even remotely veiled insults.  At some point, the stupid bint attempted to impersonate a Qld Police Officer in an effort to intimidate him.  His response of course was to demand to see her ID and inform her that, if she was a police officer, she should know better than to break the law by parking illegally.  Not surprisingly the haggard looking granny/business woman wannabe backed down and oddly enough, did not offer to show Mr K her identification.  They swore at each other a bit more and the woman looked equal parts selfish, arrogant and ridiculous in front of a small crowd outside the shops before they retreated into respective dark clouds of confrontational angst.

By the time this was over, I was nearly back to my car and thinking… why are people such complete and utter arse holes?  I mean seriously?  Name calling and swearing at total strangers?  Can’t we be better than this?  But, I guess if you are the sort of person who is prepared to take up a car park that might be needed by someone with a genuine medical need to be in closer proximity to their destination, then yes… you probably feel that childish name calling and excessive and unnecessary use of profanity in public is entirely appropriate.

Lady, I hope that karma comes and bites you in the arse big time… preferably in the form of a dirty big truck with a huge fuck-off bullbar running up the arse of your gold Toyota Camry Qld licence plate number 102-KLG.  🙂   Have a nice weekend! 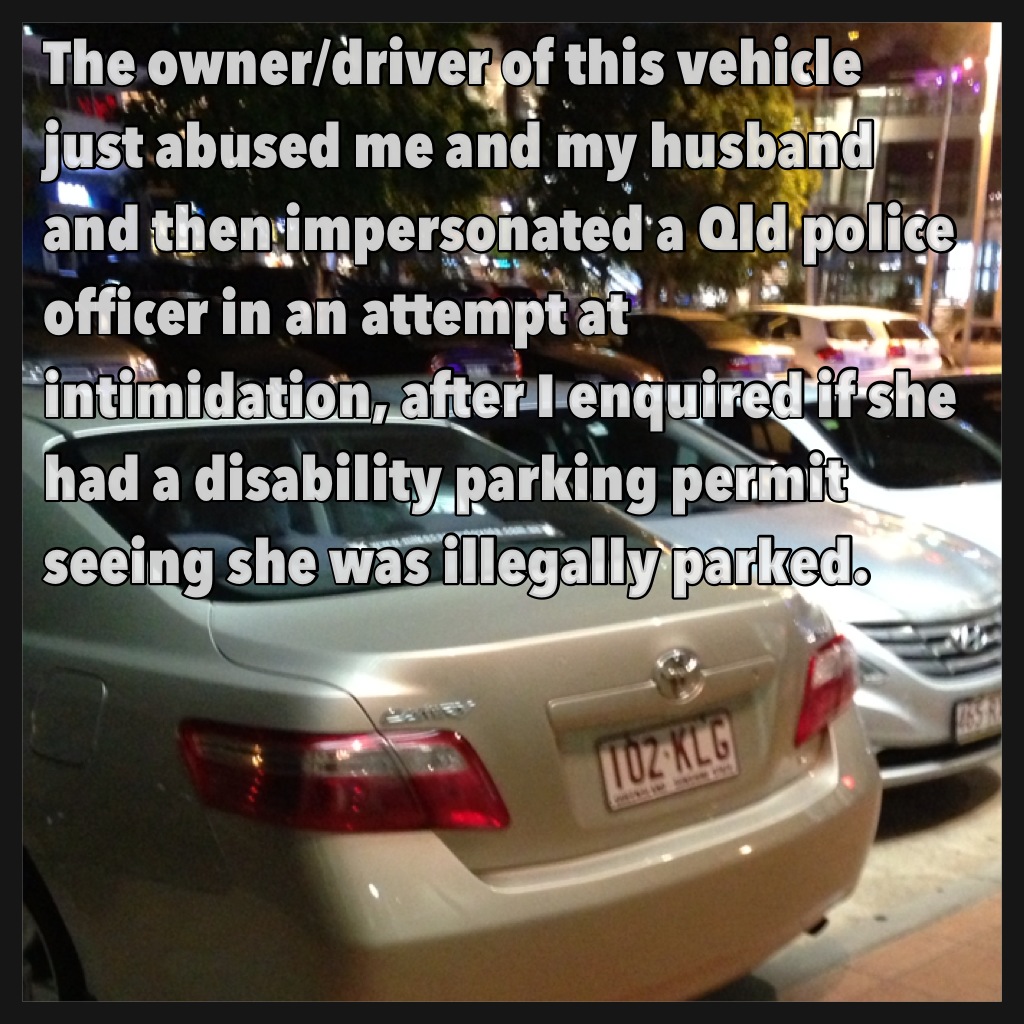 One thought on “Friday nights are for fighting!”