There’s this weird phenomena that most of us buy into when it comes to being on the road and driving around in our cars… Psychologist/psychiatrist types call it the ‘delusion of safety’ and it is effectively a self protection mechanism the brain employs in order to not overwhelm itself with the constant stimulus of impending danger.  It’s basically a un-communicated collective delusion whereby we will go about our respective days, doing our regular every day things and, assuming that it is perfectly safe to do so… because to assume otherwise is fucking exhausting!

Well… I don’t have it.  I dont share everyone else’s delusion of safety.  And I especially don’t buy into the delusion that we are safe when it comes to getting into cars, being on the road and engaging any driving related activities.  Every time I get in my car I feel just a little bit anxious and edgy that something dreadful could happen.  All it takes is one idiot changing lanes without checking or someone who doesn’t notice the people in front of them are stopping and it could change your life forever.  In fact, the feeling that ‘bad things’ could, and frequently do, happen has become so persistent and pervasive in my mind, that you could say I’ve become convinced that at some point, this ridiculous situation of repeated shit luck in cars is going to resolve itself, very likely through my untimely death – to the ungodly sound of screeching brakes, the smell of burning rubber and the gut wrenching crunch of tortured twisting metal!  For several years now, I’ve been pretty confident that I was supposed to have died in one of those early accidents and someone has been trying to finish the job off proper-like, ever since!

Anyway, the psychs say I have a ‘trafficphobia’ as an unsurprising result of the four, pretty traumatic, motor vehicle accidents in my past.  Now, I will argue with you until the goddamn cows come home, that it isn’t a fucking phobia at all – a phobia being defined as ‘an irrational fear’.  I mean, you tell me… if you experience a fear reaction as a result of a real and present danger based on first hand experience then that can hardly be called bloody irrational now, can it?  But trafficphobia is what they tend to call it nonetheless.

Except when the moderate disquiet becomes extreme panic or overwhelming anxiety… and then they call that PTSD.  Fine… They can label it whatever they want.  But the nuts and guts of it is this – getting into a car and driving anywhere has a tendency to bring out my worse, as I believe it is an inherently unsafe thing to do.  Getting in the passenger seat and leaving someone else in control of the motor vehicle jus about doubles that sense of impending doom once you add my obsessive personality traits to the mix and dump with a steaming pile of ‘out of control’ to the top of it.   And in fact, driving it is the most dangerous thing we do on a day to day basis, and no one seems to fucking notice!  But once that curtain is lifted and you become aware of just how crazy arse dangerous a seemingly innocuous drive home from work can be… well, that shit just can’t be unseen.

Since Nov 2007, the date of my last major car accident, every near miss, every plonker who thinks they can just make it before the red light, every wanker who has headphones on and can’t hear what’s going on around them, every complete fucktard using their mobile phone while driving, every moron not paying attention to where they are going, every P Plater driving over the speed limit thinking they’re invincible, every uncovered or awkwardly balanced load, every 4WDer up near the school who can’t reverse their monster truck, every granny who can’t stay in their own damn lane, every idiot who seems incapable of operating an indicator and every vehicular middle age crisis sports car loving self indulgent arsehole who thinks he owns the entire road, has reminded me of just how precarious the entire driving thing is!  With these non-contact every day reminders, I have to say, I really, really don’t need anymore reminders thank you very much!

So to the person who nudged into the back of my car and crushed in my rear bumper yesterday afternoon, and who then promptly drove around me and fucked off while I pulled over in a state of rising panic… I’d like to say fuck you and the white corolla thing you rode in on!  I don’t know where someone gets off hitting someone in their car and then failing to stop and exchange details.  I have no idea where someone finds the gall to run into someone in their car and not even bother to check if that person is ok?  What sort of psycho fucking does that?  Just runs into someone and then buggers off?!?  🙁

I then spent the bulk of the day wondering how the hell I am going to face getting back in my car, because it’s not like I was doing so great with it before this jerk off ruined the tenuous grip on the Safety Delusion that I was attempting to claw back into my life.  I’d seriously rather not think about it.  I’d rather be like everyone else and not be constantly hypervigilant for the next chicken fucking moron who is going to come along and attempt to kill me in a car!

1) I have THE most shit luck in cars of anyone I know!  I’ve never had an ‘at fault’ accident, yet have been in four accidents that have been seen all vehicles written off.  I have never damaged my cars, yet between the last two vehicles I have owned, they’ve been in the shop about eight times for repairs that were not of my doing.

And 2) My next car is going to be a goddamn armour plated, Lenvo BearCat!  Complete with monstrous bullbar and huge stonking towball for the radiators of anyone coming from behind. And then I am going to run every basterd who has the audacity to come anywhere near me, clear off the fucking road!  🙁 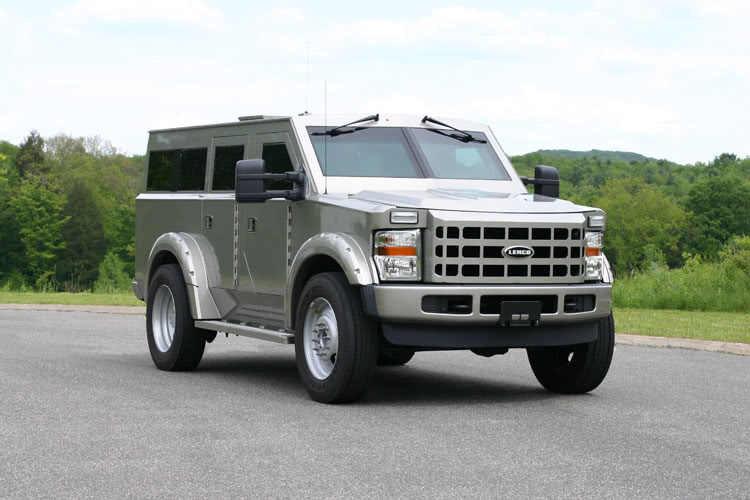