Three hours ago… someone killed my little car.  🙁

I was minding my own business driving home from work, and some silly bint in an expensive Mazda RX8 ploughed straight into the arse end of my poor little car likely killing it forever.  I hate hate hate idiot drivers.  An I hate to admit that I reckon most of them are stupid dumb bint women.  So that makes four.

Four accidents I’ve been involved in.

First one – a nasty cab driver who said he didn’t see me and failed to give way, pulled out in front of me and we ploughed right into him.  Second one, in Lismore on Christmas Eve and some idiot in a panel van was on my side of the road at the crest of a hill on a country highway and we smashed head on at approx 80-100kph.  And then the third one where I was in a car that rolled into a ditch on a gravel highway in Tasmania.

And now today, where the silly bint in her flashy Mazda drove up my arse and smooshed me into the car in front, so I got sandwiched in between.  I have a sneaking suspicion that I aint gonna feel so good in the morning.  😐

As if my poor chronically whiplashed back weren’t bad enough as it was ….. 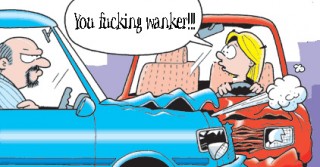