I saw a pretty young woman with interesting (*twitch twitch*) dress sense broken down on the side of the road yesterday morning on Meadowlands Road in a crappy old red Holden Barina.  She was pulled off to the kerb, had her hazard lights on and was talking animatedly on her mobile phone; presumably attempting to acquire some roadside assistance.  Plenty of cars drove right on past her, myself included… though this is primarily because I am of little or no use in such situations, as I have no mechanical knowledge, and there is nothing I could do for her that she and her mobile phone are unable to accomplish on their own.  And I was potentially running a bit late for an appointment :S

But it reminded me of a different broken down vehicle I saw not so long ago in Coorparoo, not far from the Coorparoo State High School.  It was another woman experiencing similar vehicular trouble parked on the side of the road. This time an older woman, very well dressed, probably in her early to mid 40s, in an older model, but very tidy, Mercedes Benz.  However, in this situation, the woman wasn’t phone in hand, desperately trying to find help because she had somehow attracted the attention of not ONE, but THREE would be knights in shining armour, who had stopped their cars on the side of the road nearby, all on hand to gallantly offer their assistance. 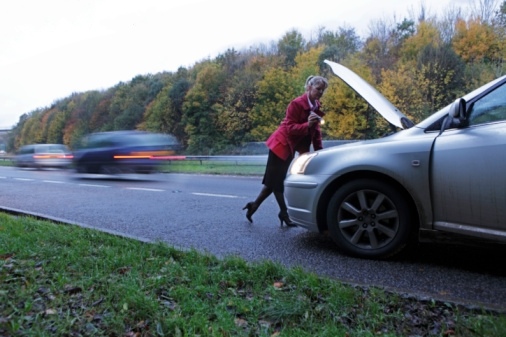 So there is a turn up for the books!  And with it goes an old theory of mine that guys will come rushing to the aid of a cute young thing with bare shoulders and a windswept carefree look about her, but that ladies of more mature years are often left to fend for ourselves.  However, I dare say in the specific cases I have mentioned, it has less to do the age of the women involved, nor how perky the jiggly bits nor how stylish she may be… but rather a fair deal more to do with the appearance of financial wherewithal and social status attributed to driving a Mercedes Benz, as compared to a banged up faded old Barina.

What’s the world coming to when super short shorts with the stupid pockets hanging out low above shapely young legs is less likely to gain you assistance than driving a once expensive, imported car.  Who knows what on earth men are thinking about these days?

What I do know is that it probably pays to keep your RACQ membership up to date – just in case.