As anyone who’s been following the news or indeed, just the Queensland Police Service’s Facebook feed, would know there has been a notable increase in shootings in South East Queensland over the last year or so.  Just this weekend alone there has been several armed robberies, a shooting at Burpengary, the details of which are sketchy, and a shooting at Robina shopping centre, the surveillance images for which are just as sketchy.  OT: Why is that the case given the improvements in digital technology over the last decade?  Surveillance video images, as Yale pointed out, are just as crap as they’ve always been? So the Gold Coast police are looking for a man who is ‘possibly Pacific Islander or of Middle Eastern appearance, of large build with tattoo on his neck’ who may be ‘able to assist them with their inquiries’.  A muscly guy with a tanned complexion and a tattoo on the Gold Coast?  Yeah, no problem.   :S

But I digress (I know it’s a bad habit).  I originally starting to write that people need to stop shooting one another, because if this trend keeps going they are going to crack down on firearms legislation… again!   The most recent statistics I have seen on gun related crimes in QLD indicate that 97% of gun related crimes are committed with ILLEGAL firearms – ie: firearms that do not belong to licensed firearms owners and are not registered with Weapons Licensing Branch. But every time politicians and the Qld Police Service need to be seen to be getting tougher on gun related crimes, they screw down on firearms legislation even though there appears to be little evidence that restricting gun ownership and making acquisition ever more difficult reduces these crimes.  No doubt this is largely because they are NOT being perpetrated with legally owned and registered firearms possessed by licensed gun owners!

So, please, if you happen to know any of the hairy unwashed miscreants committing these shooting offenses with illegally obtained firearms, do your local sporting shooters a favour and encourage them to threaten and harm one another with knives, power tools or gardening implements.  Anything other than a gun really.  Because personally, I believe that we as a community deserve more stringent restrictions on the purchase of cutlery, chainsaws and secateurs to keep the law abiding citizenry safe. 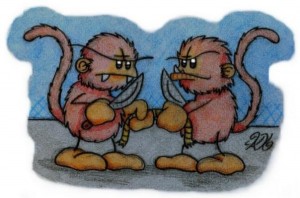 It’d be nice to see them using their knives and forks.