As is customary in the SCA, during the Reign of Leofric I and Sabine II a cypher was created to bestow upon those who had helped and assisted us during Our tenure. Given King Leofric is a master jeweller and in possession of particularly fine skills, he decided to create an Anglo-Saxon ring that We could gift to those wonderful Gentles who assisted Us through our crazy Covid reign.

We worked together on the design and Leofric handmade the master ring, that a mould was then created from. Once the rings were all cast and completed, from the moment I first held one in my hand… my immediate response was, ‘I really NEED to throw this ring into the Thames for a happy mudlarker to find!’ His work was stunning as per usual, and it was a beautiful recreation of a 9/10thC Anglo Saxon ring.

I had no notion of when I might next be in the UK, but had decided one was destined for the Thames when I did finally make it abroad again.  As luck would have it, a trip was unexpectedly arranged not long after our international borders were opened… and barely two short months after these rings were created, I found myself back in England. As fortune (and my itinerary) would have it, I did not once manage to get into the centre of London and instead found myself happily sojourning in the countryside for the days I spent there instead.

Seeing I had (somewhat deliberately) avoided the hustle and bustle of the city, I recruited my dear friend, Kev Z to take on the commission of tossing the cypher ring into the Thames on my behalf. This morning, three days after my return to Australia, while enjoying my habitual heatpack and a cup of tea, I receive the following messages from the gorgeous Kev, to whom the ring was entrusted to its destination…

“I have a small tale to tell you…
We boarded the tube into central London, bound for the Millennium Bridge… 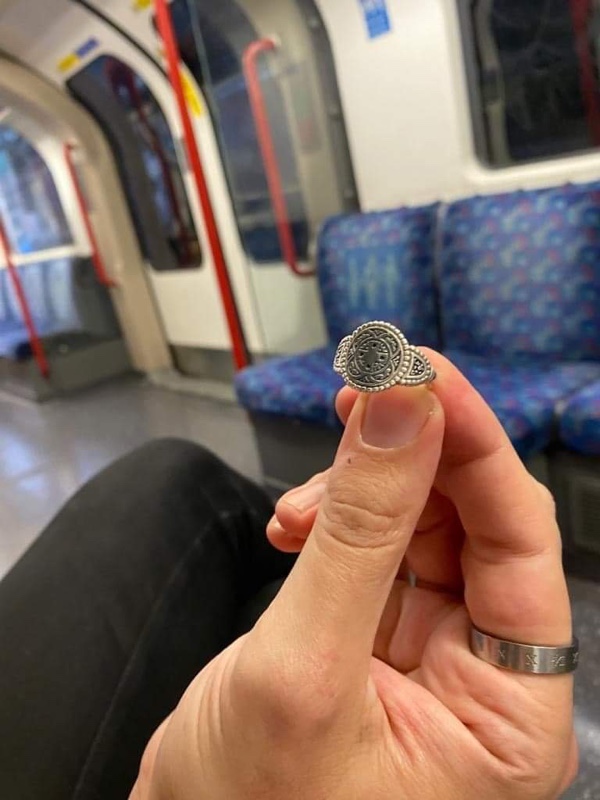 And arriving at London Bridge, in the shadow of Southwark Cathedral, we wandered through Borough Market… 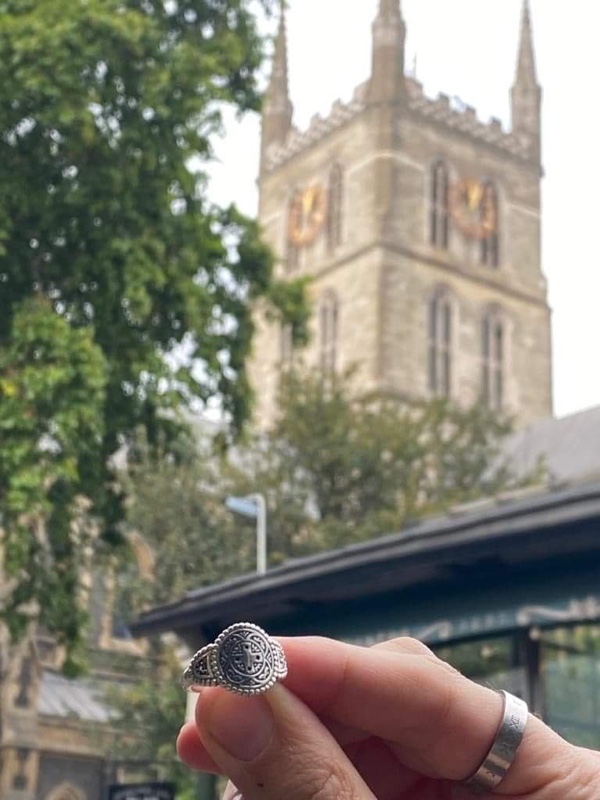 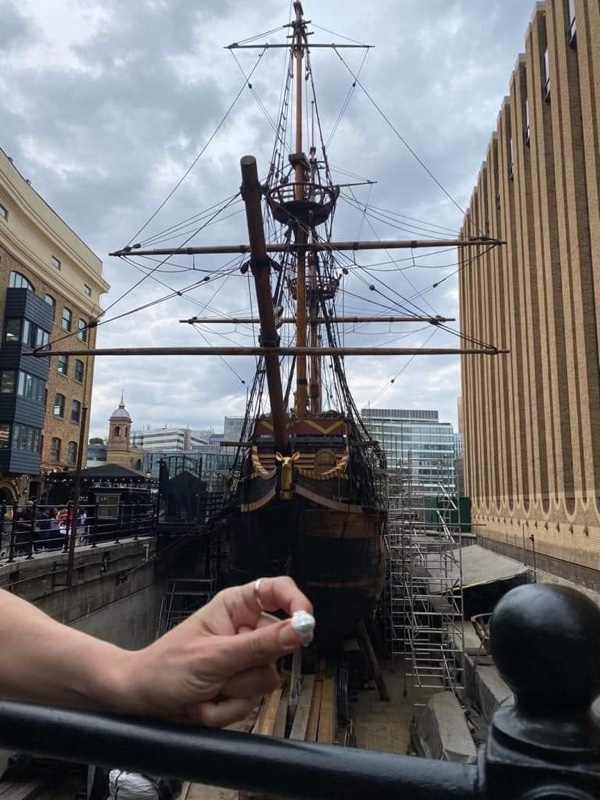 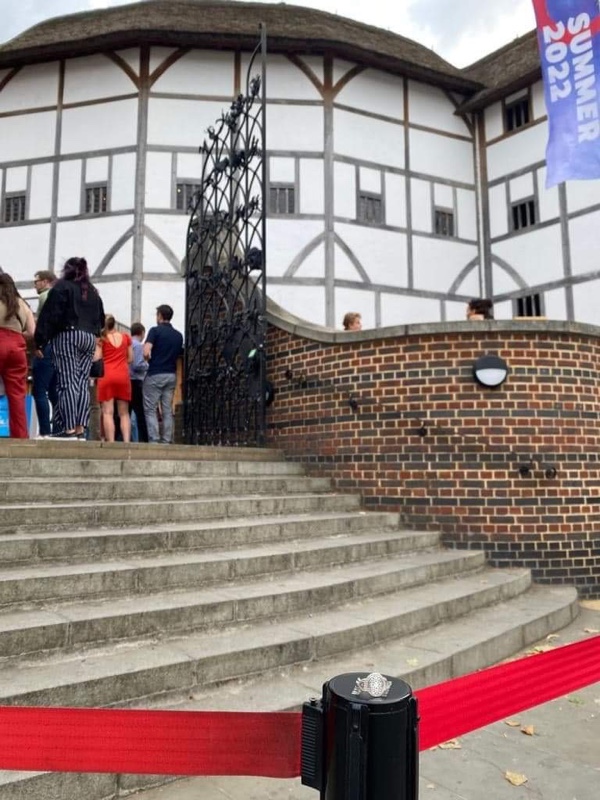 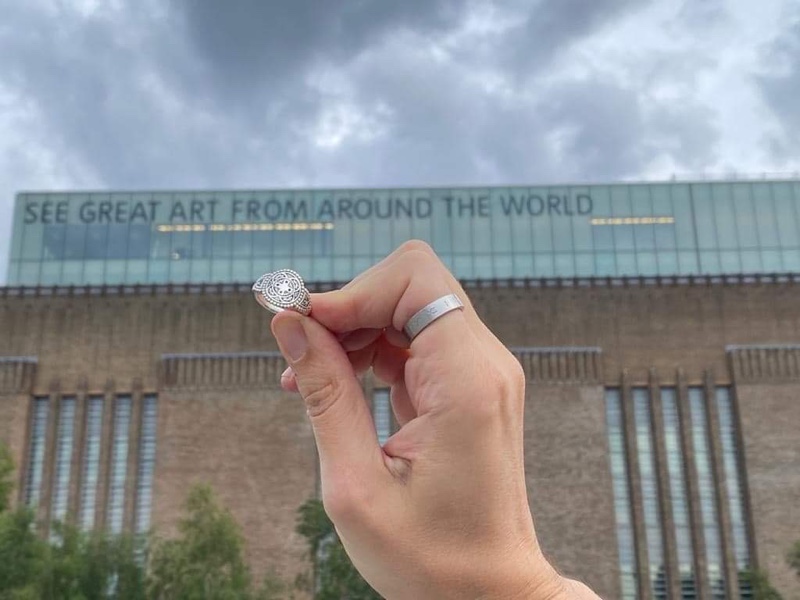 And onto a bridge… 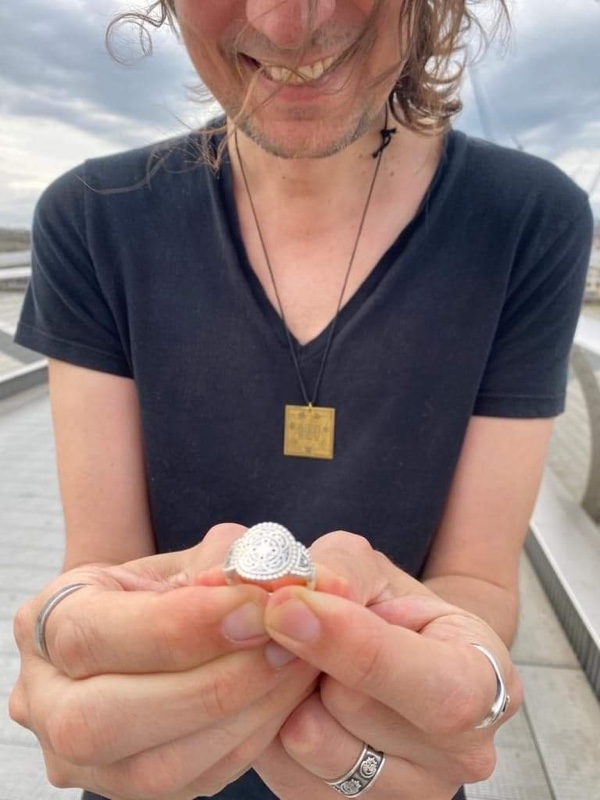 Watched by a great spire… 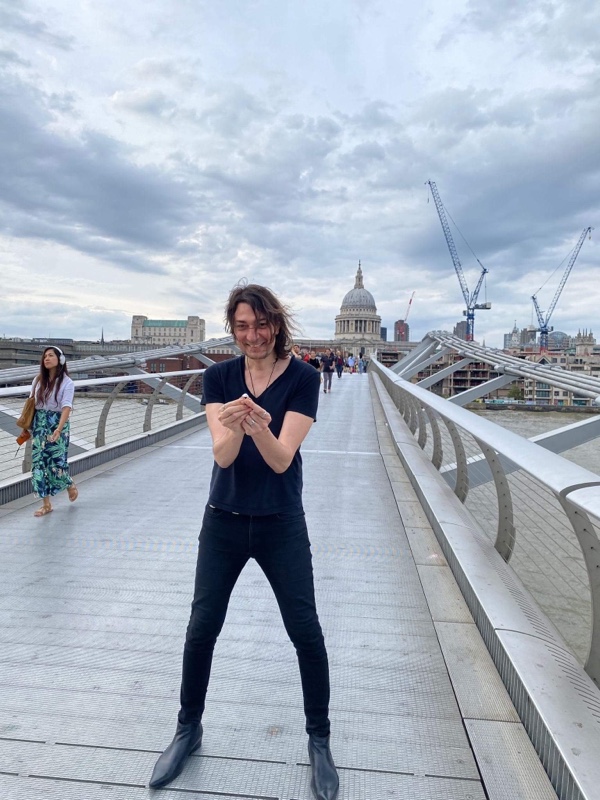 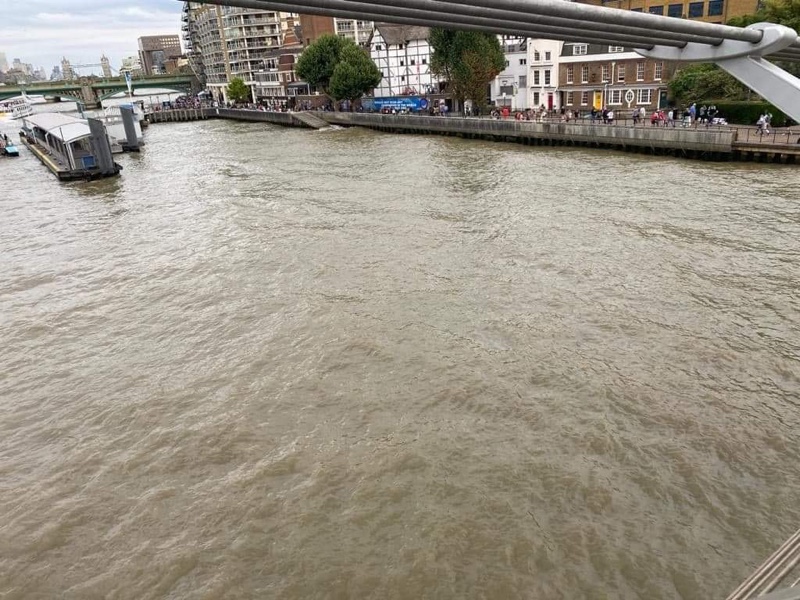 I had asked Kev if he might film a small clip of himself tossing the ring into the Thames from the Millennium Bridge such that I might share with Leofric – and instead he took me on a delightful little adventure through London, and shared a poem as he completed his commission.

Kev, you gorgeous (gorgeous!) man, thank you ever so much for this – I had not envisaged how my whimsical request would be turned into such a thoughtful and memorable journey, but I should have known that your beautifully poetic and artistic soul was never going to unceremoniously dump the ring into the Thames, like a tourist throwing a coin into a well!

Ten thousand treasures
Strewn beneath dust
An arid garland
of abundance,
How many fortunes
blessed me.
A deluge of gold
Flowed through
these hands
Spilling in
brilliant cascade
Rare and remarkable,
So many jewels
Tumbled from these
graceless palms
Clumsy in their gathering,
Tarnished by a softly
oiled touch
Their glamour gifting
me glow
To melt into air
Dispersed upon
lonely darkness.

Treasures they remain,
Every one
Whilst these spoiling
hands inelegant linger.

There has been quite a bit of curiosity about the Iron Chain that was bestowed upon Jarl Niáll at Coronation… Please see the text below for the words that were shared at the time of presentation regarding the history and intent of the award:

Good populace, We beg your indulgence, for We have a tale that We would share with you all… a letter of Our Gratitude, an Unusual Quandry and an Extraordinary Request.

“DEAR…? During this reign, We have found in Our midst, a singularly unusual Gentle who is a citizen of Our Fine Kingdom of Lochac. This Gentle is one We would see showered with accolades for His exceptional personal virtues of courtesy, grace and chivalry; His uncommon valour, exceptional bravery and Laudable sense of
Honour – attributes which he exhibits in Our Society, as well as in His Mundane Life.

Sadly, We found Ourselves faced with an Unusual Quandry as there is no fitting Award that exists in Our Kingdom that would appropriately mark the deeds of this Extraordinary Gentle. The singularly
honourable person of whom We speak is Niáll inn Orknevski, Duke of the Kingdom of Lochac and mundanely a high-ranking Commander with the Australian Border Forces

*Let Jarl Niáll be bought before Us *

Within the Society, the valiant and selfless deeds of this Honourable man are but little known – with the exception of one occasion where he saved a woman from choking at a local feast. For those who
never heard of this deed, Niáll noticed a commotion across a candlelit feasting hall and saw a Gentle in obvious distress. He strode across the room, took charge of the situation, lifted the afflicted gentle to her feet and performed a Heimlich manoeuvre to clear her airway, thus saving her life. We dread to think how an incident of this nature may have played out had He not been present and in possession of a
particular level-headedness in a crisis. We relate this story as but one example to convey how Niáll is, and continues to be, an Asset to Our Society.

However heroic this rescue may have been, it is actually His mundane deeds that We wish to draw Your attention towards. Niáll has worked in law enforcement of diverse types over the years, where he has
variously been responsible for coordinating border management across
numerous multicultural stakeholders throughout the Australia/Pacific arena. Additionally, he has extensive experience in investigations, counter-proliferation and immigration. Indeed he has applied all these skills to Our Society’s benefit as well, having acted for two years as Deputy Kingdom Seneschal, in charge of investigations.

In September 2021 (which now seems ever so long ago!) Niáll was called upon to be Forward Commander in a very particular response operation responsible for the evacuation of the entire Australian Cohort
from Afghanistan, which included a large number of Australian civilians and refugees. As part of His execution of these duties, He unexpectedly found himself responsible for the extraction of a number
of unaccompanied minors. His role in the rescuing of these children from an uncertain fate under a pernicious foreign power, is such that We cannot provide much detail – the exact nature of the work executed by Niáll is not widely known and We are not able to paint a clearer picture for the Wider Populace due to the nature of His work. The only reason We are privy to the personal cost that Niall faced to
secure these children – is because We recently have had the unusual Honour of assisting Him in updating His curriculum vitae.

Niáll’s conduct during the Operation went far and above His remit in his role as Forward Commander. We are fortunate He and his team were returned safely to Us, and We are all surely grateful that through
his service there are families and children living safely in Australia today because He is the sort of person who does not think twice about putting himself between Innocent Children and Dangerous Men.

Niáll does not readily speak of this trial, (nor should anyone press him to), but having known him for many years, We can say that for some time, this experience noticeably changed him.

Which brings Us to Our Unusual Request… We would from the depths of Our ever so humble heart, recommend unto Your Most Gracious Majesties King Sven and Queen Rauokinn of An-Tir, this extraordinary
Gentle for Your Consideration. Though He be distant from Your Lands, We believe that this remarkable Soul is deserving of admission to An Tir’s famed Order of the Iron Chain, for He is the very epitome of
everything this Order stands for. We know it is not common to bestow awards to Gentles across Kingdoms in this manner, particularly during these Plaque Years when Wayfaring is difficult to impossible, but it would be the singular greatest Honour of Our Reign if We were
able to see this award home to such a worthy recipient should You find Our petition agreeable.

Yours in Service to the Crown and
Kingdom of Lochac,
Queen Sabine”

For any who may be unaware, the Order of the Iron Chain is a polling order established in An Tir in AS 12 (mundanely 1978) it has been bestowed but 17 times in the 44 years since its inception, to recognise rare acts of selfless bravery in a mundane and/or Society setting.

“Niáll, it is therefore Our very great honour and privilege to announce that on the 23rd day of April, Anno Societatis 56, at Honor War held at the College of Lyons Marche, Their Most Gracious and Undoubted
Majesties King Sven and Queen Rauokinn of An Tir, did admit Niall inn Orkneyski, Duke of Lochac, resident of Politarchopolis and Noble member of the Ravning, to An Tir’s prestigious Order of the Iron Chain.

Assembled populace, Pray join Us in offering three of your heartiest cheers for the newest member and only the 18th Gentle in the last 44 years, to be admitted to the famed Order of the Iron Chain of An
Tir!


Niáll inn Orkneyski was admitted to the Order of the Iron Chain
By King Svenn & Queen Rauokinn of Antir at Honor War, Held in the College of Lyons Marche, (Clarkston, WA, USA).
The award was conveyed through the hands of King Leofric I and Queen Sabine II at the last court of Their Reign in the Barony of Borders Cros May 7th, Anno Societatis 57