I seriously dislike cats.  I’m pretty sure I always have and it seems likely that I probably always will.  There are cat people and there are dog people and never the twain shall meet…  and I think I’ve definitely been residing over in canine territory for quite some time now. I’ve never hurt a cat or anything… I just don’t want them anywhere near me and preferably not on my property.  I’d never deliberately harm a cat – hit it or kick it or run it over in my car (even though I might joke about wanting to) because personally I think anyone who was in the habit of harming small animals should be under watch for other sociopathic tendencies.

But mostly I don’t like the way cat lovers seem to get all wound up if you have the audacity to dislike cats.  Because lets face it… if I said I hated marmosets or something equally banal… no one would give a shit.   😐
. 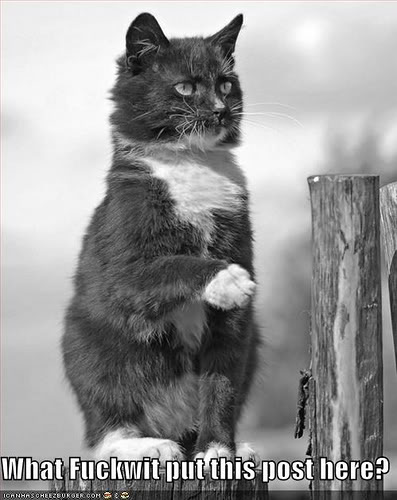 borysSNORC ™ says:
There’s something wrong with your cat.

borysSNORC ™ says:
He seems to be able to spell.
.

Which Batman Villain Are You?

I can only assume that I’ve somehow managed to very cleverly and calculatedly cloak my intense dislike of cats in general by refraining from kicking the verminous little creatures while their owners are around.