Last Sunday (it’s Friday morning now), I noticed some tingling in my tongue and around my lips and it felt like the allergy reaction that I get if I’ve been exposed to, or ingested, sulphites.  It’s normally something that I have only experienced from drinking certain ciders or wines (which I tend to avoid because I’m not fond of the sweeter stuff anyway), but because this sensation had persisted for a few days and because of my family history, I was fairly convinced something else was going on.  I spoke with BigSal and she had me do a bit of winky-blink test and asked if I could swoosh water around in my mouth, and it was fine – both tasks doable.

The following morning, Monday, woke up and – nope.  Couldn’t wink my right eye at all, and failed the swoosh test while brushing my teeth most spectacularly.  So off to the doctor I went – something I was trying to avoid since I have been effectively going nowhere except for groceries and to my mum’s or my sister’s homes since Feb 23rd.  Get to the doctor, tell him I have been experiencing dreadful headaches (with hideous light and noise sensitivity for over four weeks now), and that I have woken up with severe facial paralysis with considerable pain, numbness and tingling, primarily down the right side of my face.  He asked me if I was experiencing any other referred nerve pain or weakness, particularly on the right side of my body to which I replied: “Is this a trick question?”  Because of course, I do. I always have nerve pain in my extremities.  He did a double-take and seemed to remember who he was talking to, and said, “Well, I think you have… ” – “Bells Palsy,” we ended the statement in unison.

Him:  How did you know?  Me:  My father had it when I was a teenager and my sister had it perinatally, so I guess the dodgy nervous system and bullshit immune responses kinda run in the family.

If you don’t know what Bell’s Palsy is – you can google it.  Doctor’s are not convinced they know what causes it.  Some say it is the immune system having a meltdown response to exposure to a virus (Great… I’ve been isolated since late Feb, and gee lemme think, what crazy arse virus is globally running amok atm?).  Others say it is caused by prolonged periods of stress which causes the immune system to go haywire.  Either way, the thing is effectively inflammation that causes all the facial muscles and nerves on one side of your face to go ‘Oh ferfucksake’. No idea, why it only occurs on one side..?!

For reference and comic relief… I provide this almost photo-realistic artistic representation of my face right now with Bell’s Palsy:

Anyway, because of the horrific never-ending battle with chronic neuropathic pain that has taken over my entire adult life, the doctor decides I should go have an MRI of my brain to double-check there are no signs of a stroke or brain tumour lurking about that we might miss because my relationship with pain is somewhat NOT NORMAL.  Had the scan on Tuesday night which in itself was not fun. The technician had said that we may need to add contrast if they see something that needs further investigation or can’t get a clear scan, but that it often wasn’t needed.  So I’m in the scanner for about 40 mins when she comes over and says that she called the radiologist and we are going to need to use the contrast (not exactly comforting given her earlier statement).  Then about another 20 mins in the scanner before I can go – but of course they won’t tell you anything about the scans, ‘Your doctor will have the results by midday tomorrow.’

Which wasn’t overly helpful given my doctor doesn’t work Wednesday afternoons (he opens Saturdays instead) and that meant I didn’t get the results until Thursday morning (yesterday).  No signs of stroke and no signs of brain tumours… which was weirdly both a relief and a disappointment.  Yeah, disappointment – my ‘interesting’ relationship with chronic nerve pain actually had me half hoping they’d find some bizarre (but operable) brain tumour that has been causing my shitty pain condition these last 30 years.  Perhaps that kinda unusual thinking is something I need to spend some time on down the track…

When I did finally call and find out that I have the all-clear, and it is *just* Bell’s Palsy as we suspected. Which means a few days of prednisone – if it helps, take it, if not, don’t… though how you are supposed to tell if it’s helping when I’m feeling so completely shit, is fucking beyond me – and then I just have to wait it out.  The paralysis and pain symptoms should abate in two to three weeks with a bit of luck, and then facial massage and physio-type facial exercises to rehabilitate any muscle atrophy for the next three months or so.  Most people will recover entirely and have no noticeable long term effects – and given I recognised this for what it was really early (due to familiarity with the condition), we jumped on it really quickly.  My dad was not so lucky as he probably ignored his symptoms too long, and had a facial droop/weakness for the rest of his life that left him with a lopsided smile for the rest of his life.

These last few weeks of self-imposed social distancing/isolation have not been fun. Our work has dried up almost completely, and while it has been wonderful having Mr K home so much, it has also been stressful trying to navigate the potential financial implications, cancelling all our travel plans for the entire year and the exhaustive hard work to avoid people – all the people who seem so unconcerned about this pandemic!  I’ve been watching many of my friends struggle with the adjustment of working from home and trying to help school their children (oh my god, my heart is daily going out to my teacher friends – they have been under such inordinate strain in such extraordinary circumstances.  We have been spending our days sharing health information and news articles on Facebook and seriously dark memes on Twitter, while watching America’s dumpster fire of a response to the pandemic scare the hell out of all us (and so it should – this is what happens when an apathetic constituency elects an uneducated, mouth breathing bigoted, misogynistic, narcissist to high political office), making us ever so pleased to be Australian.

Given I have no other symptoms related to viruses we are chalking this up to a genetic predisposition to stupid nervous system and immune system responses and well… stress.  Which is why I decided to write something about this and share it with my friends. We are ALL under weird stress right now, drawn-out and low-grade for some, intense and ever-increasing for others, and of inordinately long duration and with an unknown point of cessation!  I am not great at the self-care thing.  I have never mastered it, futilely seeming to prefer to ignore rather than coddle the various infirmities my traitorous body throws at me… and look what has become of that. So, I implore you all to look after yourselves and look out for each other in your isolation bubbles, and if you suddenly start to feel like you’ve just been to the dentist and the anaesthetic hasn’t worn off when you haven’t been near one for months – off to the doctor, pronto! 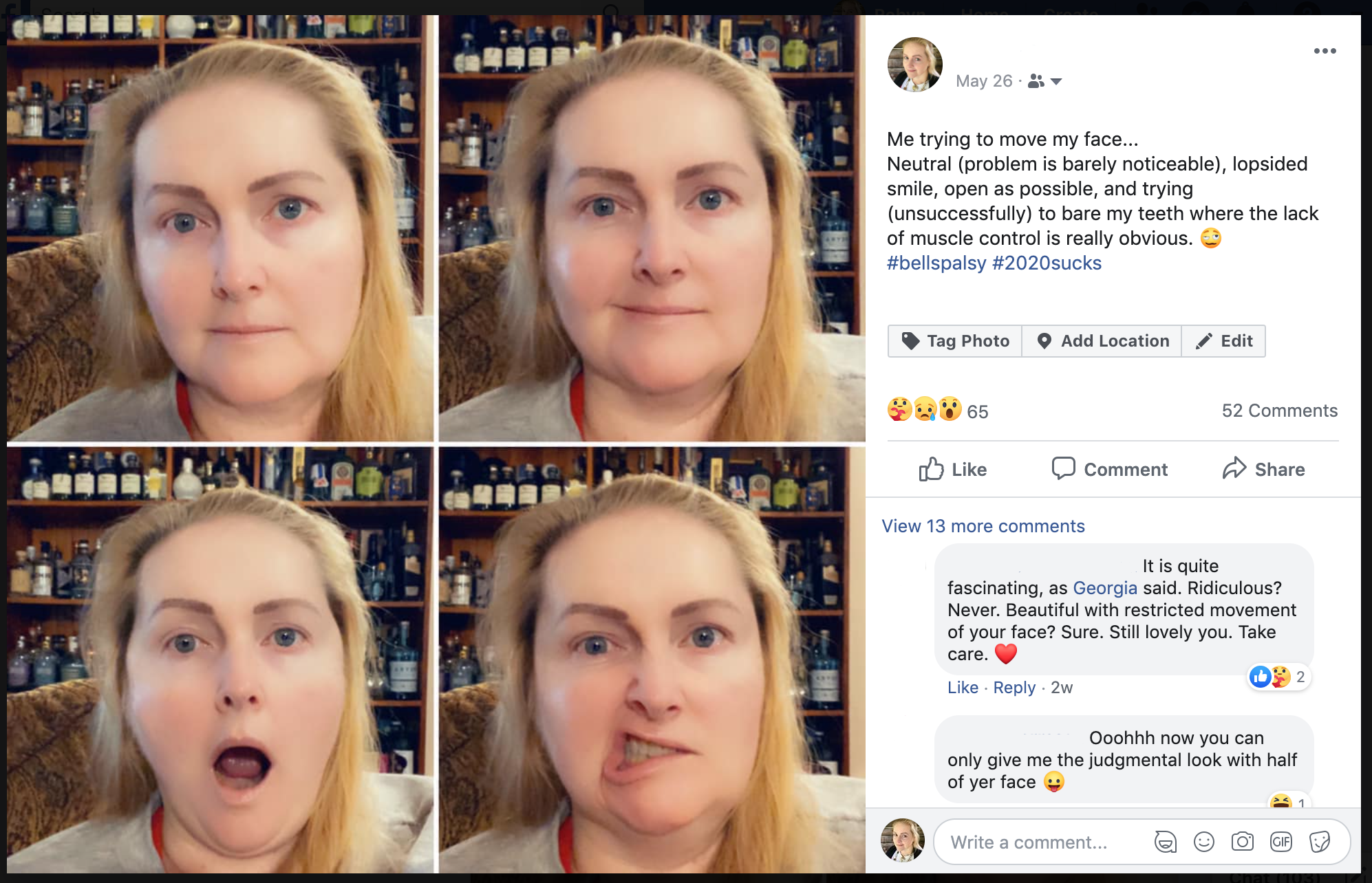 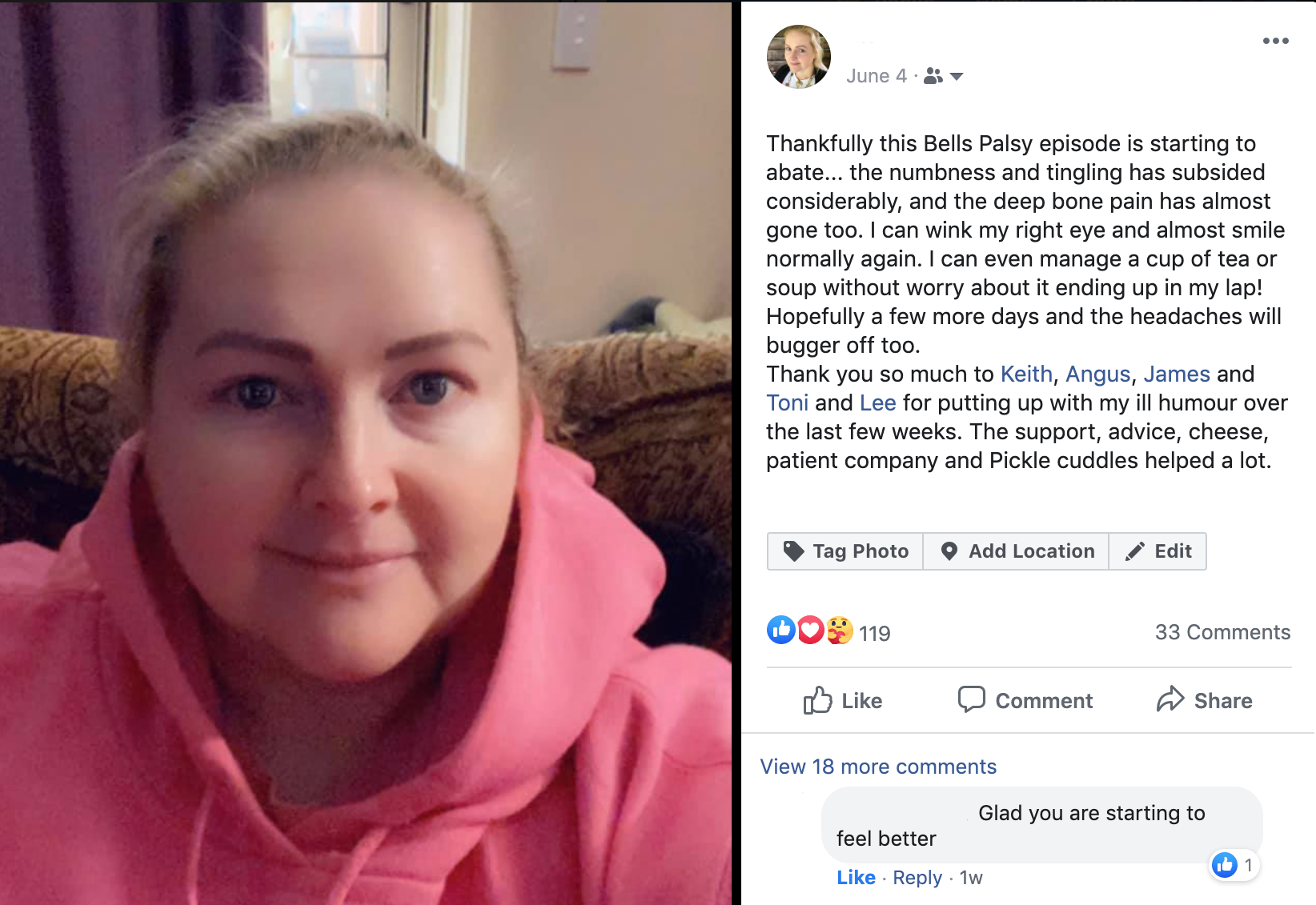