Long day ahead today so we decided to get an early start and were out of Vilnius before the sun was even poking over the horizon.  Normally, I’m not much of a morning person, something to do with medication hangovers and not being a coffee drinker, so it has to be something special to make me want to see a sunrise, but this morning, the sunrise was positively spectacular. Once the sun was, up however, the darkness dissipated and showed us a foggy and potentially drizzly day ahead. It was very moody as we pummelled through the landscape in our trusty Ford Fuckus. ‘Trusty’, right up until the moment it started dinging at us that something was wrong and only giving us alerts in fucking Polish. :/  We had to 1) Google up a translation for the problem, 2) figure out how to turn the dashboard instructions into English and 3) ultimately find a service station to check the tyre pressure – which is what it was telling us was the problem, all of a sudden. Turns out that the car with barely 8,000kms on the clock hasn’t had any tyre pressure requirements set in the analytics so it was probably just an errant alarm, but yale checked them anyway.  You can tell what sort of mood we were in by this point as he showed me his best ‘Kompresorus’ impression while we waited for someone else to be finished with the air hose at the servo. 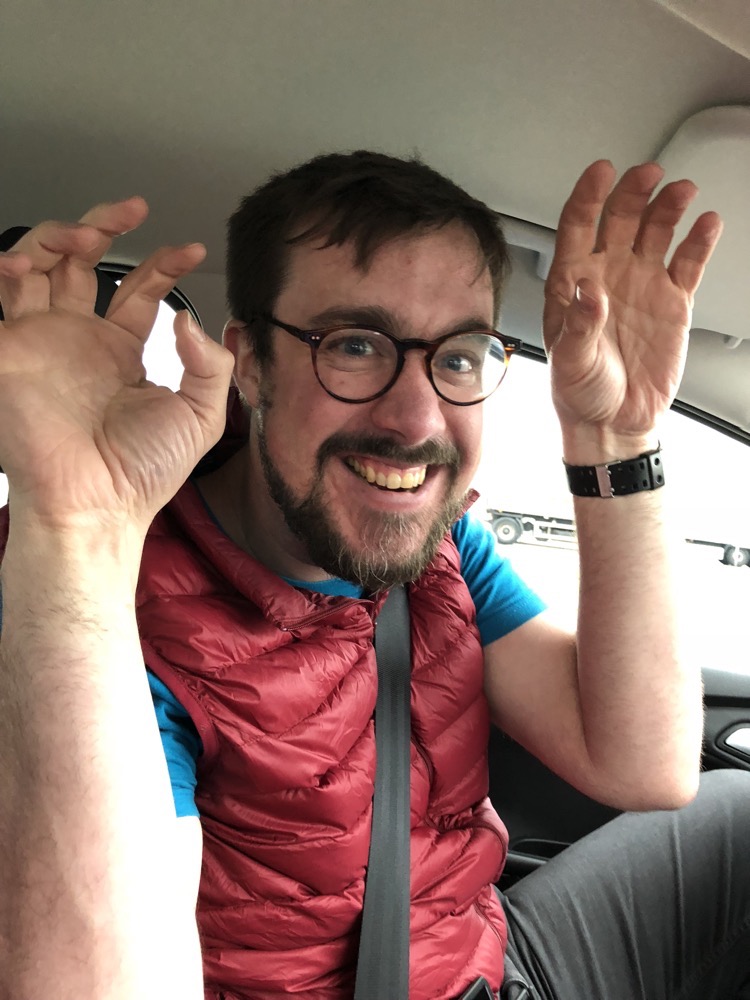 Turns out it was a ‘Kompresorius’… but we won’t let that get in the way of yale looking ridiculous for our entertainment.  We checked the tyres and acquired a hot chocolate (this one actually being hot-hot, unlike the last one which was left 90% unconsumed on a table with a note saying “THIS IS NOT HOT!” at a previous pit stop). 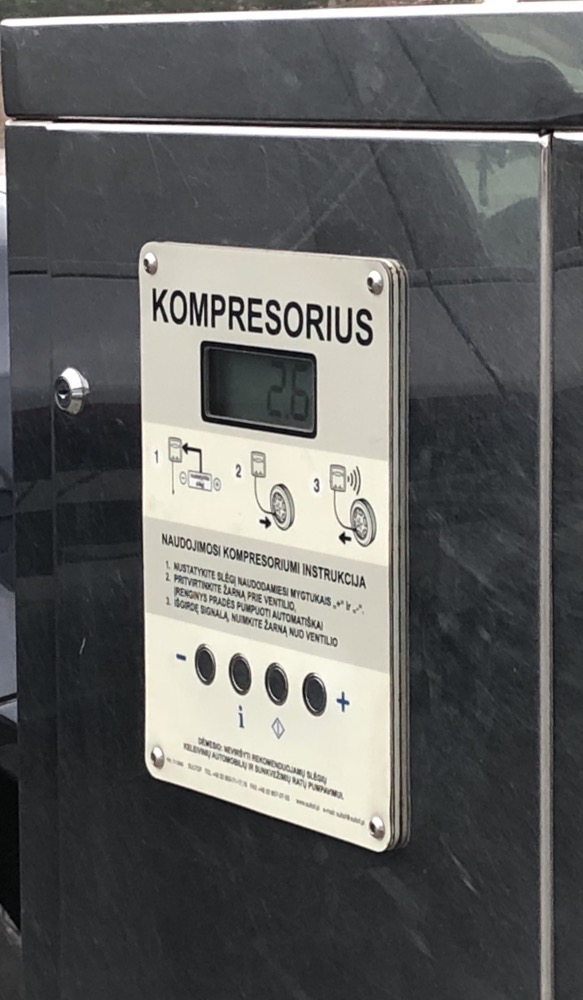 Check out these unsightly erections dotting the landscape, ruining the views.
Can’t have them in Australia.  Nope. Not on. 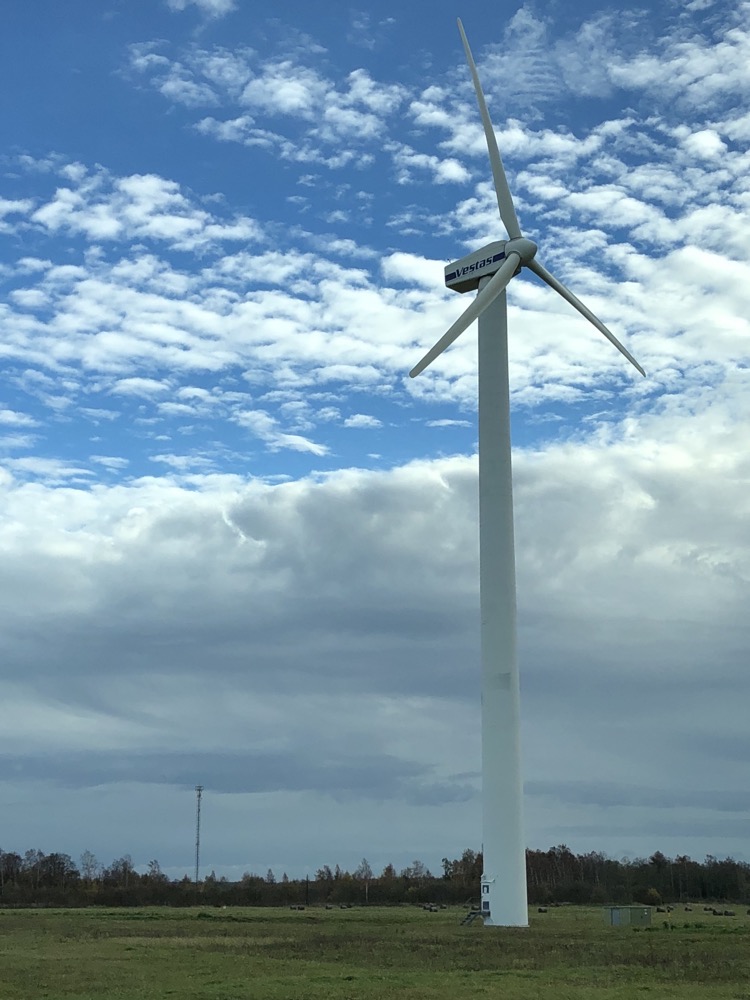 We had intended to stop by the famous ‘Hill of Crosses’ on our way from Riga back down to Gdansk next week, but there are predictions of not so pleasant weather on the horizon, so we decided to pass by the famous pilgrimage site today while it was very cold and overcast, but not actually raining. The Hill of Crosses is about 12 km north of the city of Šiauliai, in the north of Lithuania, about an 80-90 min out of Vilnius. The actual origin of the practice of leaving crosses on this particular hill has been obscured by the passing of time, but it is thought that the first crosses appeared on the site of the former Jurgaičiai or Domantai hill fort after the famed 1831 Uprising (for those that are unfamiliar with the 1831 Uprising it was also known as the Polish-Russian War of 1830-1831.  It was an armed rebellion by the Polish against the Russian Empire, which the Russians roundly won. Over the decades, cross, crucifixes, statues of Jesus, the Virgin Mary, carvings of effigies, and rosaries and various Lithuanian patriots have been brought here by Catholic pilgrims to commemorate their losses to Russian and subsequently Soviet rule.  The exact number of crosses, tokens and effigies is unknown, but some estimates put the number at approximately 55,000 crosses in 1990 and over 100,000 in 2006, so the number today is likely well beyond 100,000. 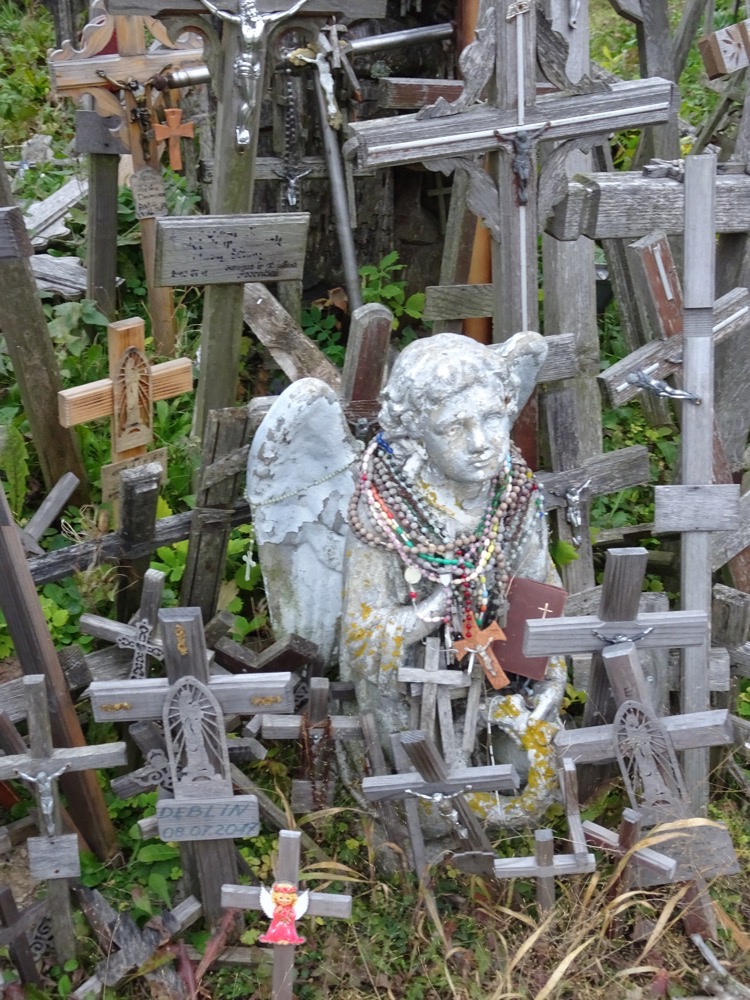 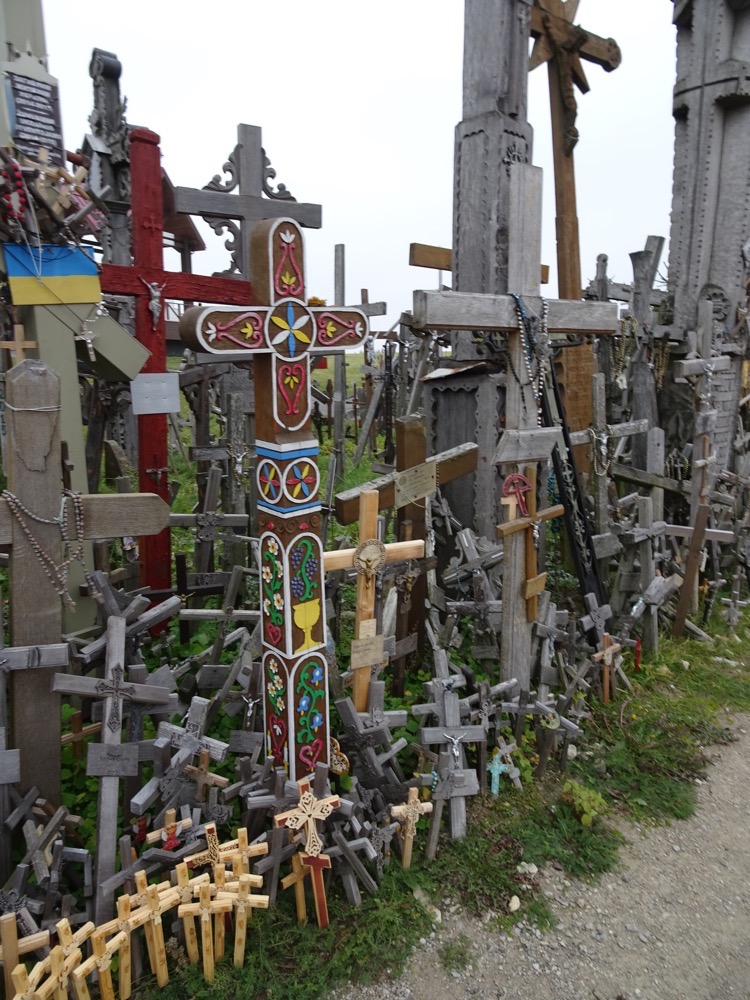 After Lithuania became part of the Russian Empire, both the Poles and Lithuanians unsuccessfully rebelled against Russian authorities in 1831 and again in 1863. These two uprisings are connected with the beginnings of the cross on the hill.  Many families could not locate the bodies of their cherished loved ones and lost rebels, so they started placing their memorials here in the form of symbolic crosses where there had been a former hill fort. 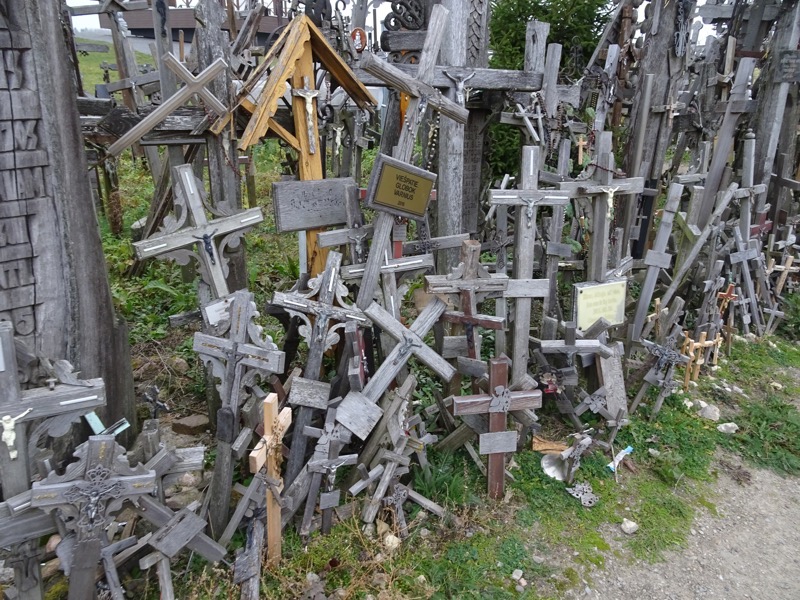 When the old political structure of the Russian Empire in Eastern Europe fell apart in 1918, Lithuania once again attempted to declare its independence. Throughout all this time from 1830 to 1918, the Hill of Crosses became a place for Lithuanians to pray for peace, for the stability and independence of their country, and for their lost loved ones during the Wars of Independence. The site took on an even more historic significance during the years 1944–1990 if that were possible, while Lithuania was occupied by the Soviet Union. People continued to travel to the Hill and leave their crosses and memorials and for Lithuanians, this place signified their original national identity, their religion, heritage and culture. It became a place not just of memorialising those who were lost, but also a powerful place of peaceful resistance.  The Soviets authorities repeatedly worked hard to remove the crosses and tried to remove the symbolism of the sit – even bulldozed the entire site on at least three separate occasions as recently as 1963 and 1973, but the crosses continued to reappear.  Apparently, the Soviets even considered building a damn on the nearby Kulvė River, so that the hill would end up underwater, but this never came to pass. Now, there are more crosses here than ever, and the site represents the solidarity and steadfastness with which the Lithuanian people held out for independence from the Russian Empire and then Soviet Union for over a century. 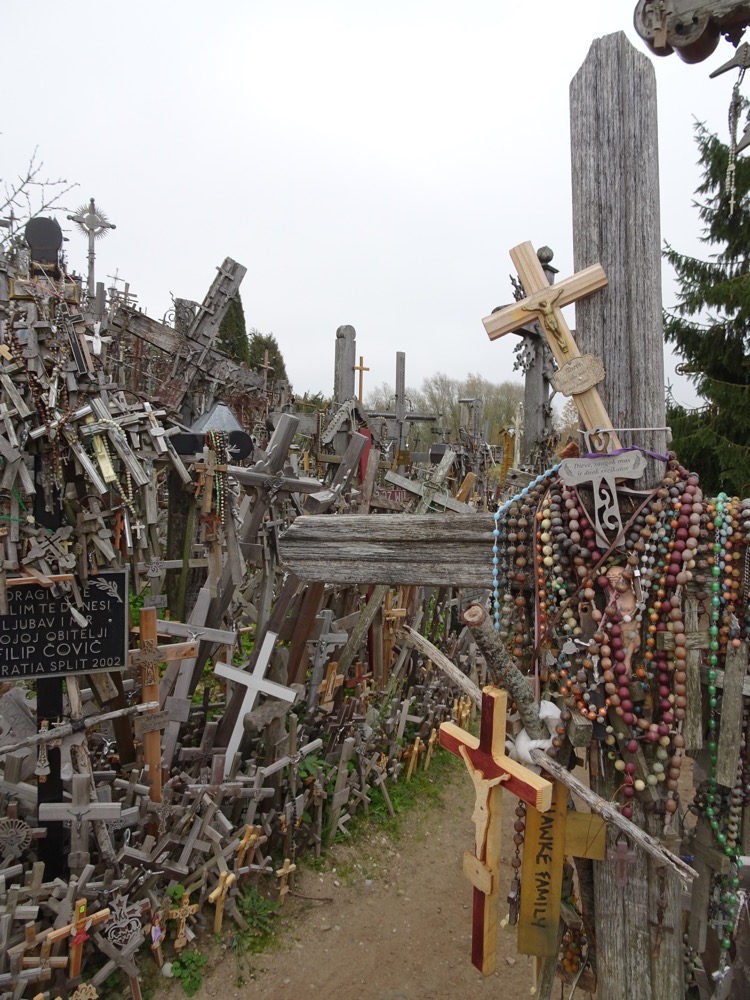 The hill is a quiet, mournful sort of place.  Particularly so on a day like today when there was no one here but ourselves and we could hear the rosaries tinkling in the wind like chimes trying to tell stories of all these lost souls. 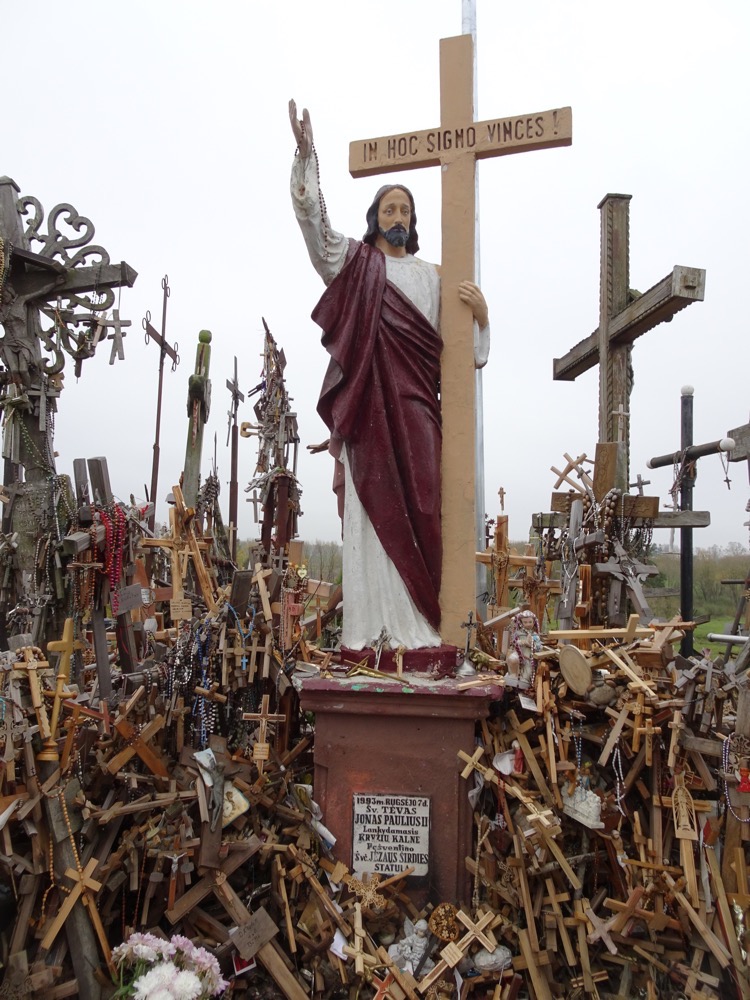 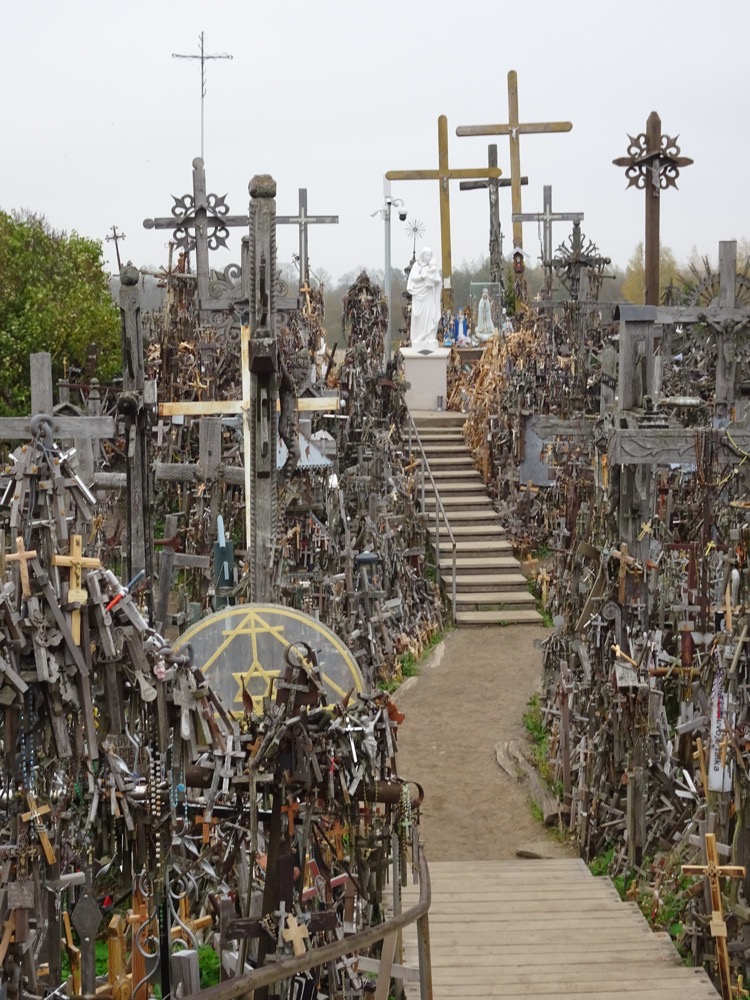 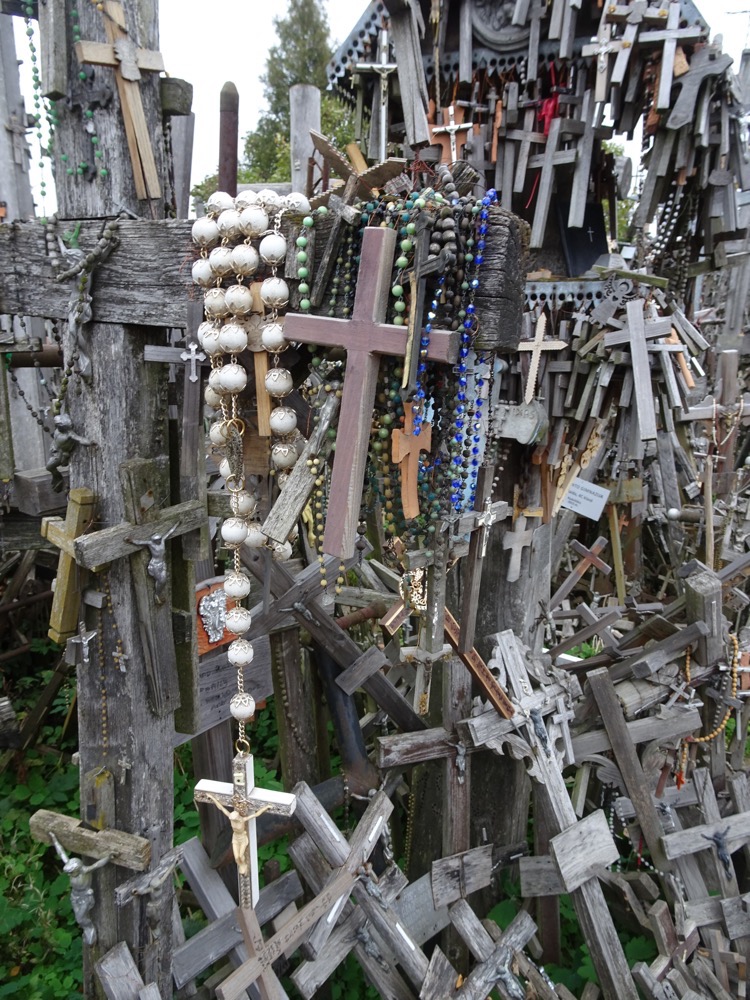 I took ever so many photographs, it is hard to encapsulate the sheer volume of crosses – each one carrying a story of a pilgrim and a lost loved one. After we left the Hill of Crosses, we head off into blue skies and crazy cloud formations for the afternoon.  In amongst blogging about yesterday, I was constantly staring out the window at these amazing clouds and the beautiful contrast in colours between the blue skies, the fluffy white clouds, the lush green grass and the yellow autumn leaves.   My speed landscape photography is improving every day! 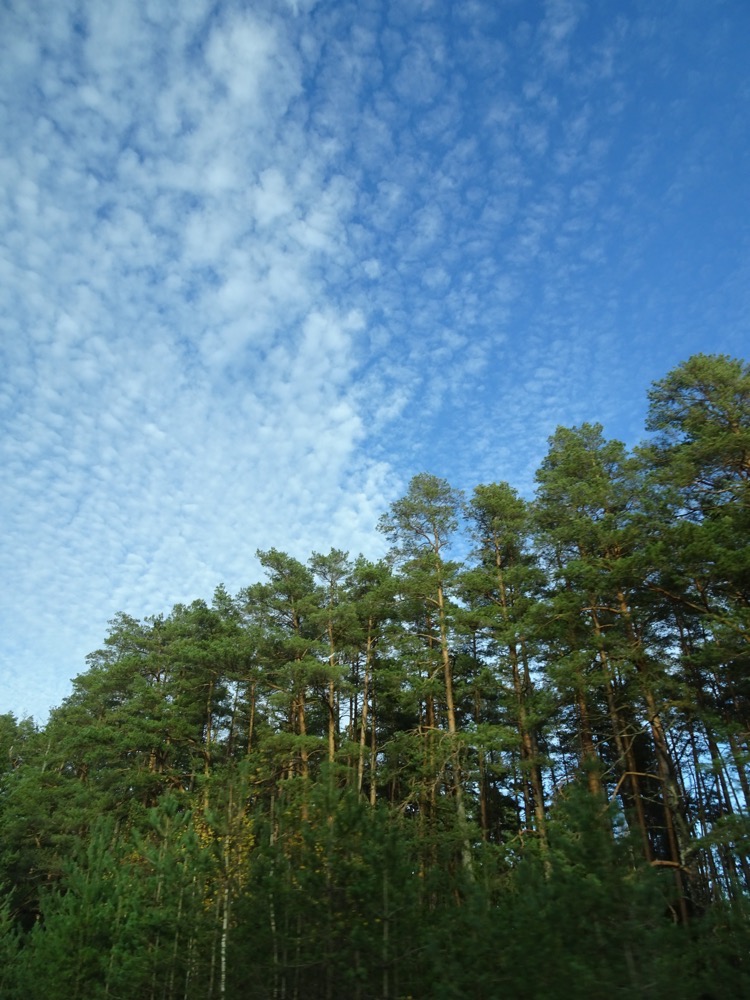 Ooh look, lots of military vehicles and suddenly lo’ and behold another unmanned border between Lithuania and Latvia. Look at this, I mean look at it: Stunning landscapes as we drove through the Lithuanian and subsequently Estonian countryside.  Here lies the real benefit of not flying.