Depending on how you look at it, it took us 37.5 hours or nearly six days to return home from Antarctica.

This morning we breakfasted and then disembarked the ship.  It was hard to say goodbye to some of these amazing people knowing we may never meet again.  They had shared their enthusiasm and passion with us for all things Antarctic and many of them had a huge impact on our enjoyment of this trip.  Travelling with such an intimate team has been amazing, I particularly enjoyed the staff joining us for dinner in the main Dining Room each night, you had an opportunity to really get to know them and really dive into what makes them come back each year to bring visitors to this remote part of the world.

We exited the gangway for the last time and the entire Expedition Team were lined up to wish us goodbye. Some of these guys we had only met superficially, but the zodiac guides who marvelled at the whales with us, Woody who was there to greet us on every landing site, and several of the others whom you just connected with – well it was hard to say ‘goodbye’. 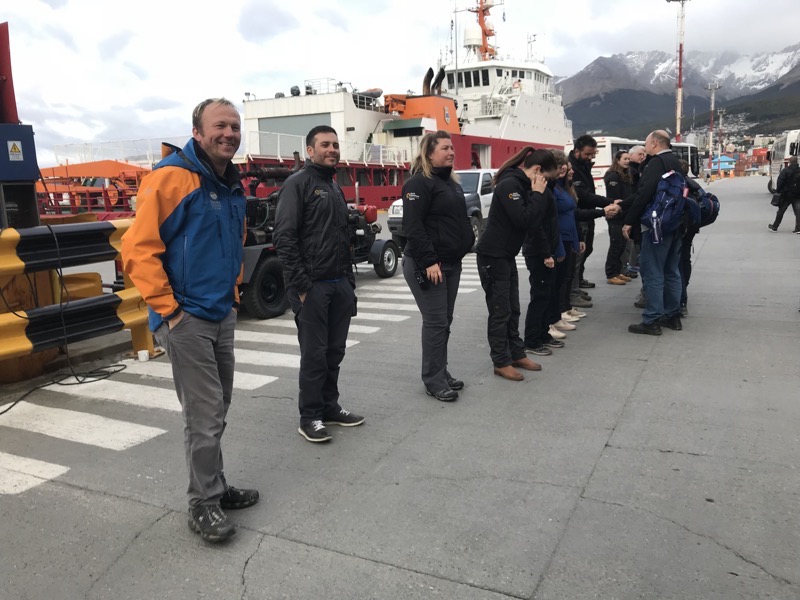 Ema is an amazing young woman – I really hope we meet again one day. I found we had so much in common.  Come to Australia, Ema!  <3 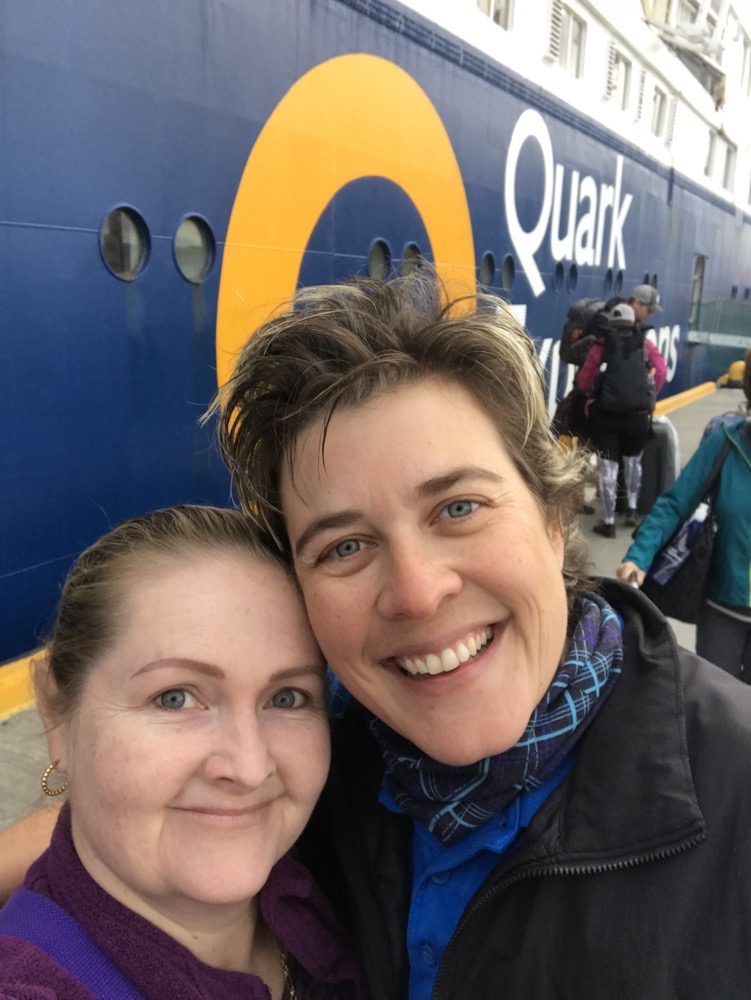 Weirdly, we were giving Woody hugs nearly every other day – he kept us informed and shared his seemingly boundless passion for Antarctica with us, and I was always wanting to hug him to thank him for sharing with us. Thankfully hugging the passengers isn’t against company policy. 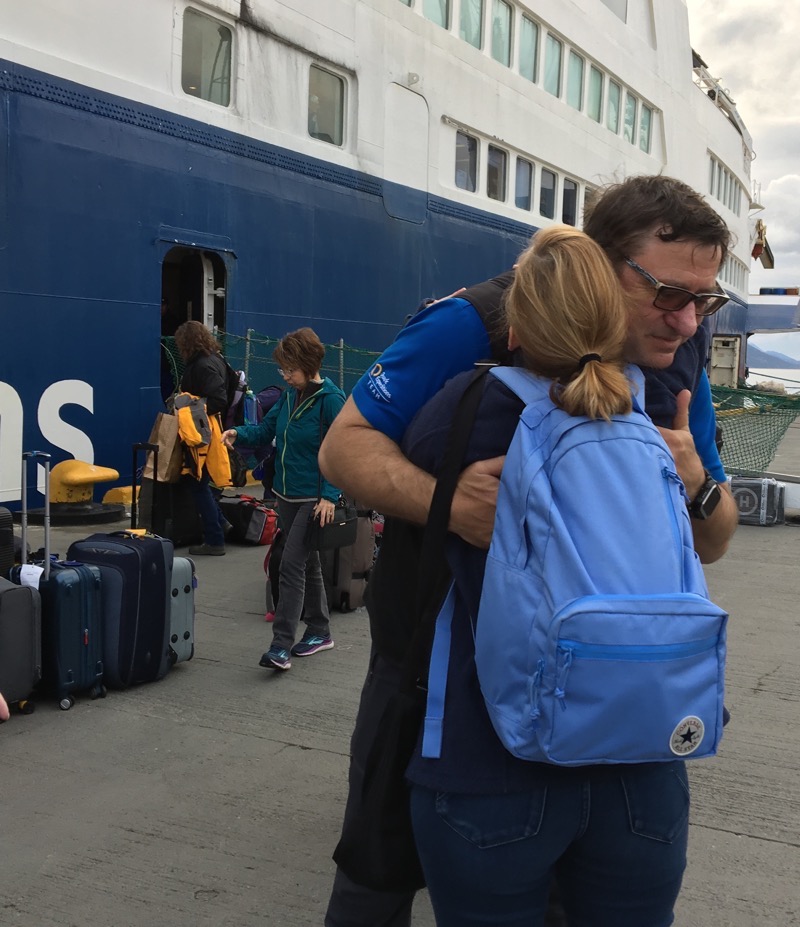 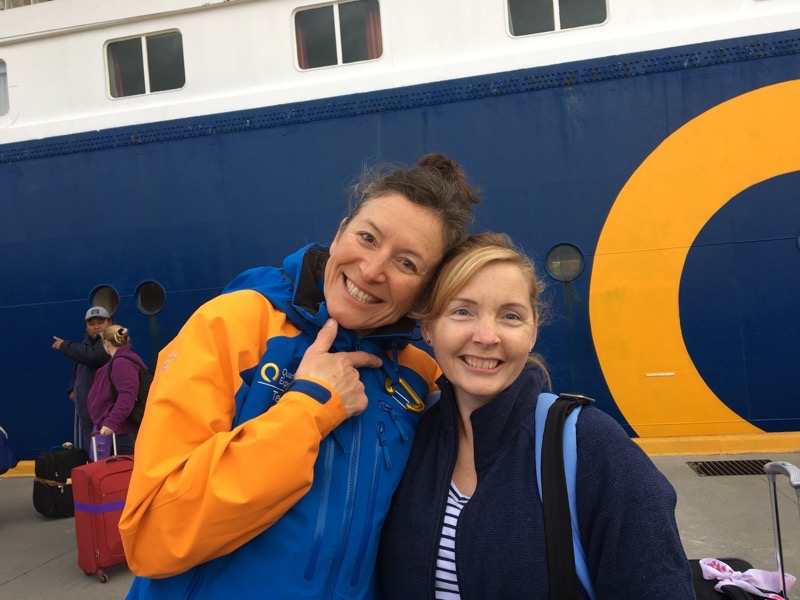 Ema crouching down to be as short as a Cross Girl.  😛 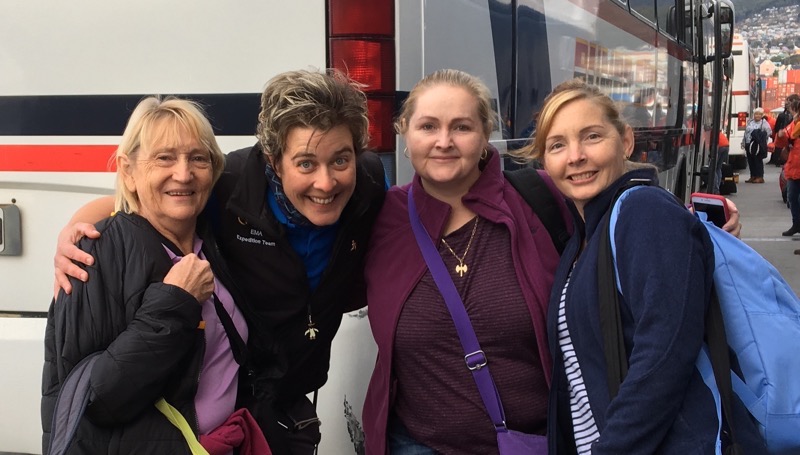 And then – we were back at the End of the World in Ushuaia. 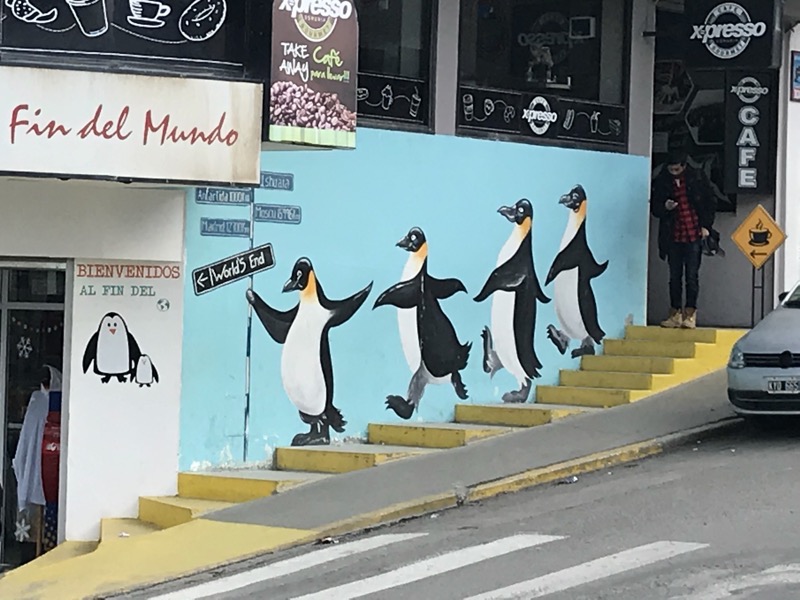 We found our hotel and dumped our luggage there and went for a wander about the town.  Aunty Mary and Lyn went on a tourist tram that runs around the city, while Trish and I went shopping looking for some things for the kids – but only after catching up with everyone on the free hotel wifi first of course! 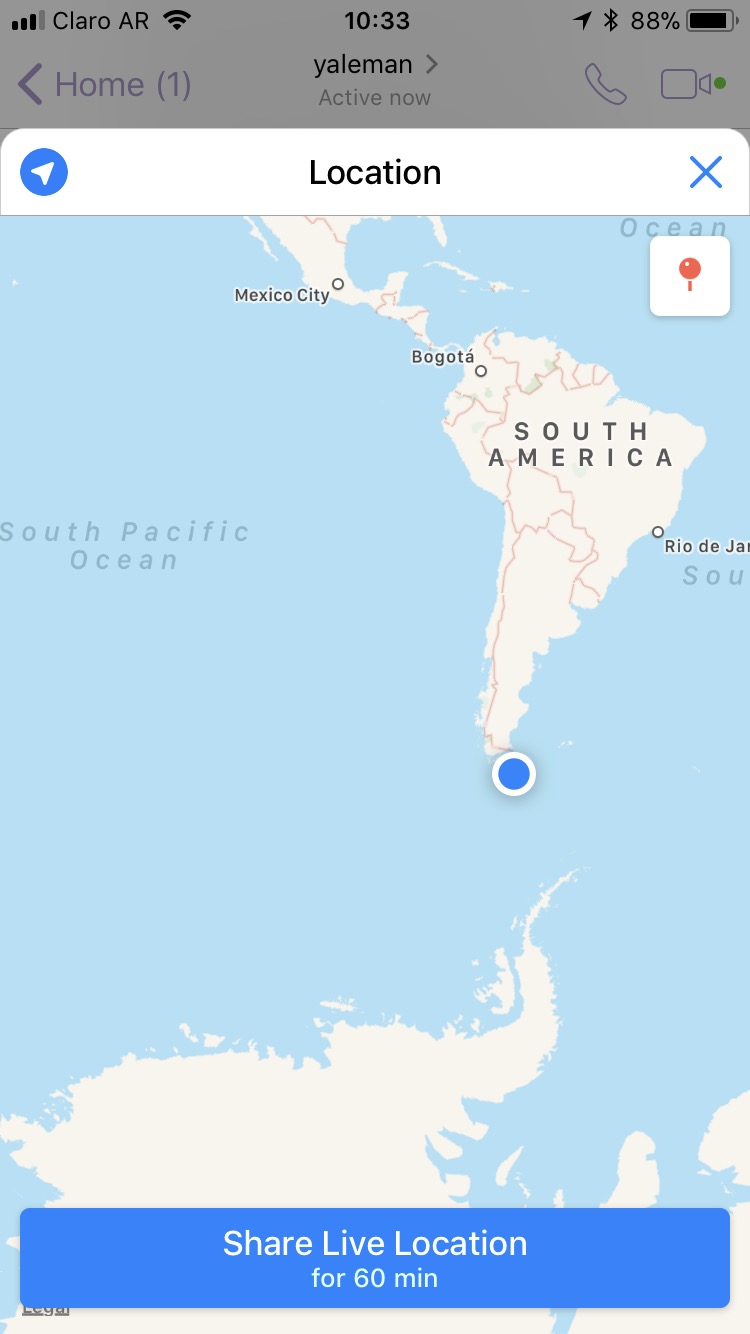 Had a chat with yale, ‘Where are you now?’ he asked… shared my location for shits and giggles and it looked like this <–  God I love the Internet!

We pottered around town looking at souvenirs and mountain equipment shops until lunchtime, grabbed a small bite to eat (which in South America, always seems to mean empanadas) where we ran into – you guessed it, loads of people from the ship – before heading back to the hotel to check in properly and find our rooms.  We stayed at the Hotel Albatross which is down near the waterfront. Unfortunately, though, our rooms had even less views than last time!  C’est la vie, it’s only for one night and we spent the afternoon relaxing and finishing Trisha’s bottle of limoncello.  🙂

We opted for dinner at the ‘other most recommended’ restaurant in Ushuaia, La Estancia Parilla for some Argentinian BBQ – because they haven’t been feeding us enough on the ship, right?  No, not really… but I have grown rather fond of the chimichurri so off we went. 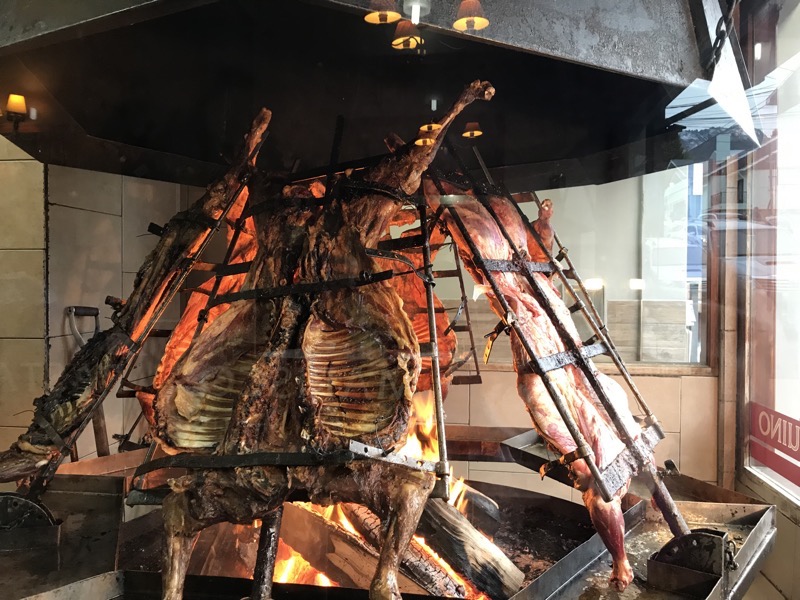 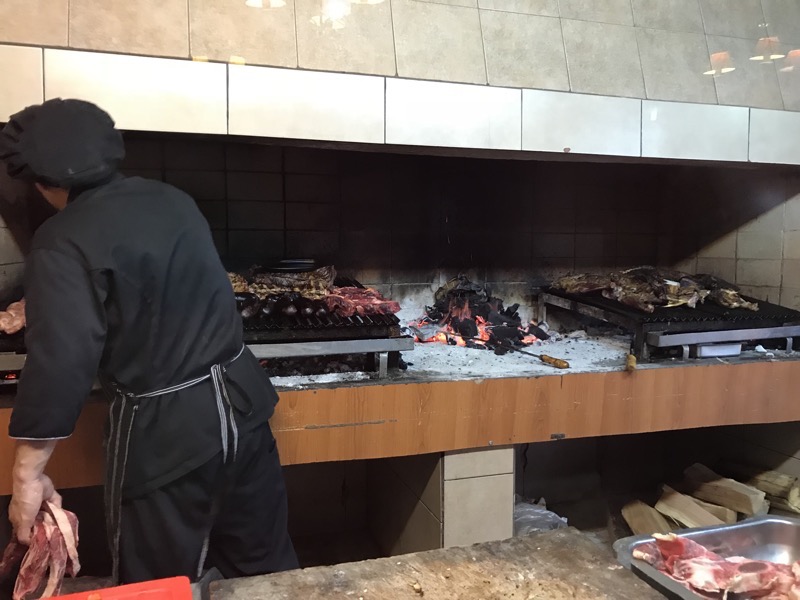 OMG – forgot about the portion sizes.  Between that and some language barrier issues, we ordered way too much food. Oh, and guess what?  We ran into more people from the ship at this restaurant too… who’d’ve thought? 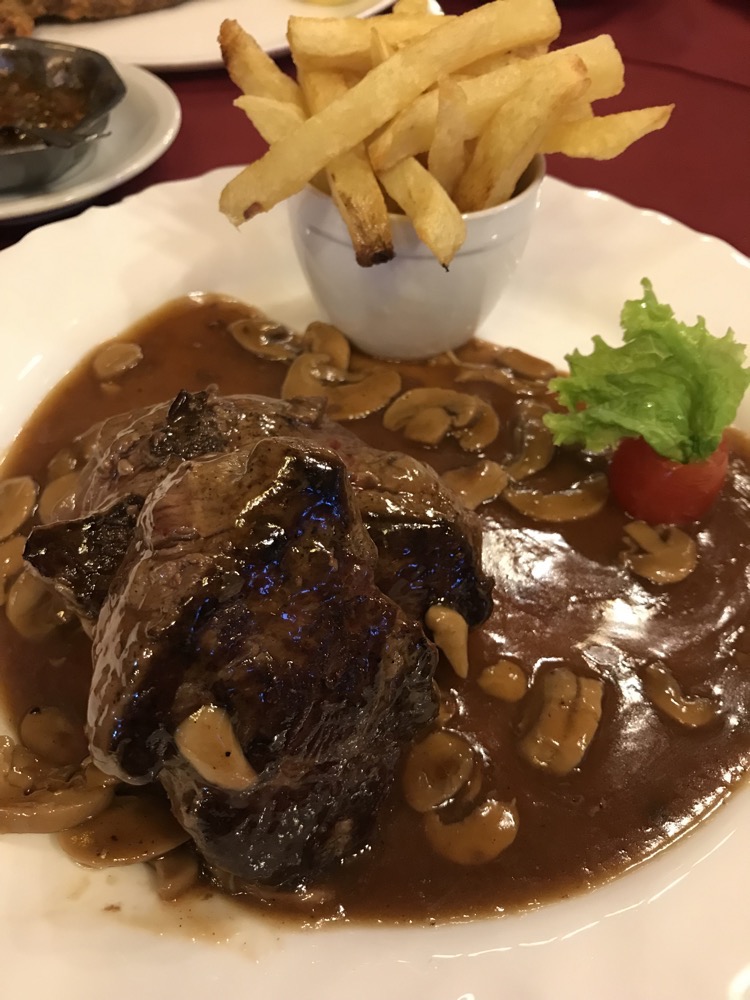 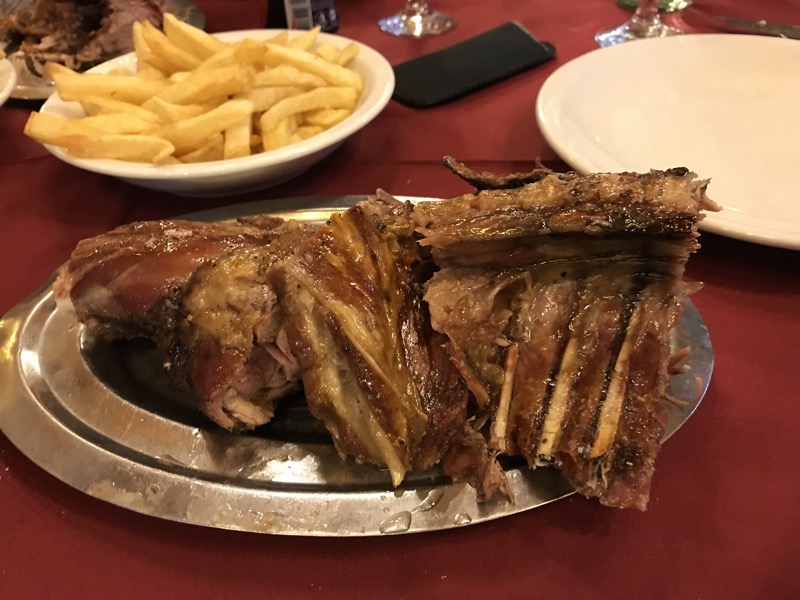 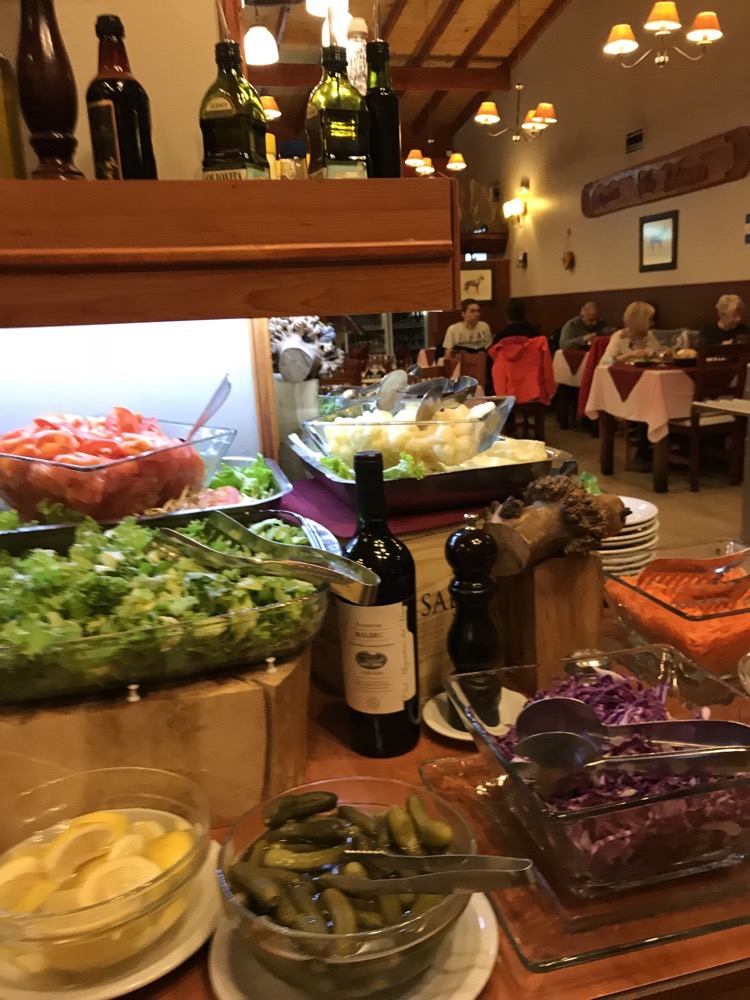 With full bellies and a few vinos under our belts, we wandered back down to the Hotel Albatross for our last night in South America.  Tomorrow the Dread Transit starts in earnest.

Woke up nice and early – dammit, and finalised our packing.  Argentina Aerolineas only allows 15kgs in their checked luggage and I got slugged on the way down and I was likely going to get slugged on the way back, but the others were doing their best to distribute their weight between their backpacks and their suitcase so we didn’t all incur a fee.  We breakfasted at the hotel and then checked out at 10:15am – yeah, that was as late a check out as they were willing to give us.  Thankfully they have a few lovely lounge areas where we could wait until about 11ish before we could call cabs and head to the airport.

Got to the airport without incident and almost immediately we were running into staff and other passengers from the ship – particularly Louise and Jessica (of the Toowoomba Coincidence) who seemed to follow us all the way home.  Anyway, the ‘Hurry Up and Wait’ of international travel had well and truly started and we took our first three-hour flight back to Buenos Aires.  No hidden stop-over this time so it seemed rather quick in comparison to the way down.  Oh and we even had a really happy and chatty check-in guy at the airport who didn’t charge me excess baggage. *wipes away a tear*  What a nice guy!  Oh and gotta love Argentina Aerolineas btw – your in-flight meal is a sickly sweet muesli bar thing, and there is no milk for your tea, only Coffee Mate (blergh!)…  But we were on our way. 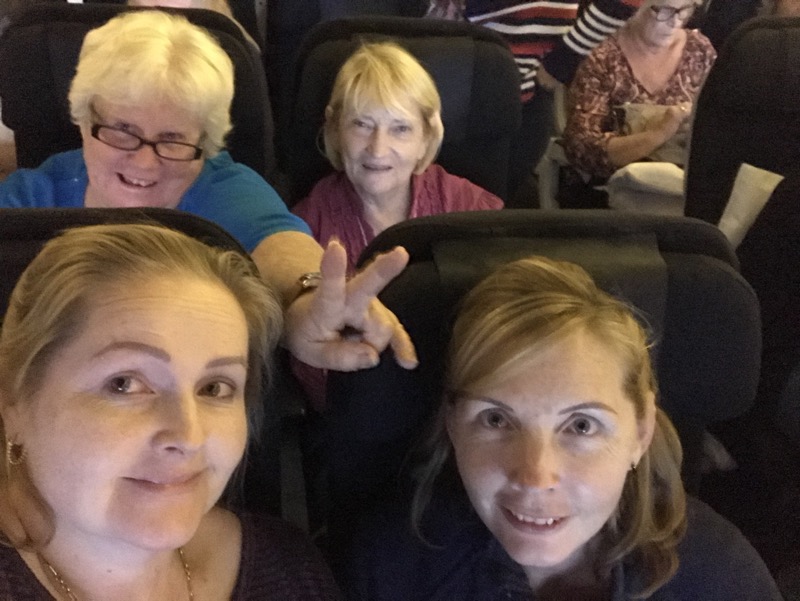 As it happened, we had a short three-hour flight, whereupon we arrived in Buenos Aires Domestic Airport which is right in the middle of the city just about, and then we were stuck with an eight hour wait before we were scheduled to fly from EZE, Buenos Aires International (Who booked this shitty transit? Oh wait, that was me).  So we had been busy hatching plans before we went ‘Internet Dark’ on how to avoid spending what seemed like an interminably long time hanging around either one airport or the other, and we had decided upon asking Jorge if we could take him out to dinner!  Jorge was the driver that Ceri had recommended to run us to the airport when we left BA, so we had contacted him and said “Can we please book for you pick us up at the BA Domestic airport, and take us somewhere for dinner somewhere local before dropping us to the International?  If you are free, we would love for you to join us for dinner, and Ceri and his wife too if they are available.”  Yeah, it was a little cheeky, but we had plenty to gain (dinner at a local restaurant with a charming Argentinan!) and nothing to lose by asking how he felt about the plan.  😀  Jorge replied almost immediately saying it would be his pleasure, and what sort of food would we like?  😛  Score! 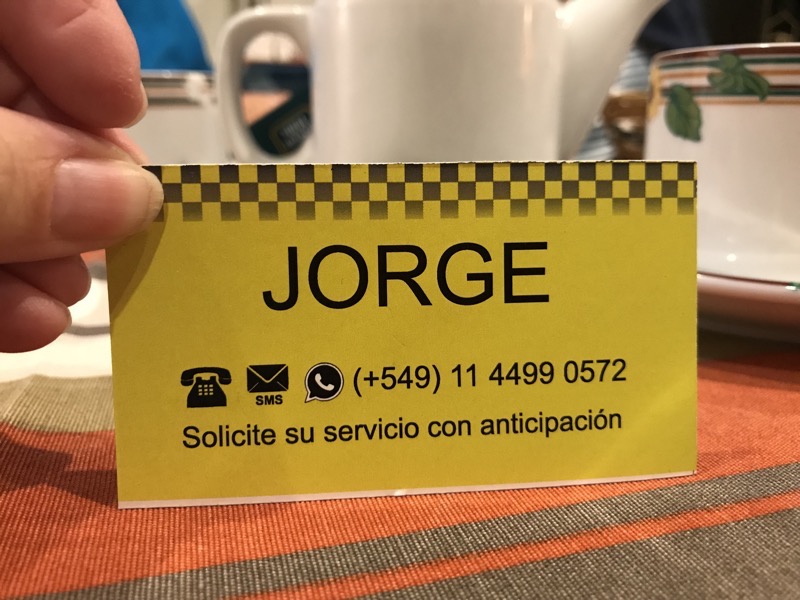 I had told a few people on the ship about our transit plans to get home and they were quite impressed – Bernadette (from Holland) in particular, literally pouted and said, “I want to travel with you!”  She too had some horrid long airport layovers to deal with also.  And yes, you’re damn right we’ve done this before!  😉

Anyway, everything went to plan, Jorge met us at AEP Domestic and took us to a – you guessed it, an Argentinian BBQ place!  😀  I have no idea where in Buenos Aires this place is, but the food was fabulous and our hostess, Marinas was wonderfully welcoming.  Because we were there so early (Argentinians are rather continental with their dining hours) we pretty much had the restaurant to ourselves, and thanks to Jorge – we didn’t even have to take our bags out of the car – Marinas had blocked off a space right out front of the restaurant in readiness to give Jorge somewhere to park. 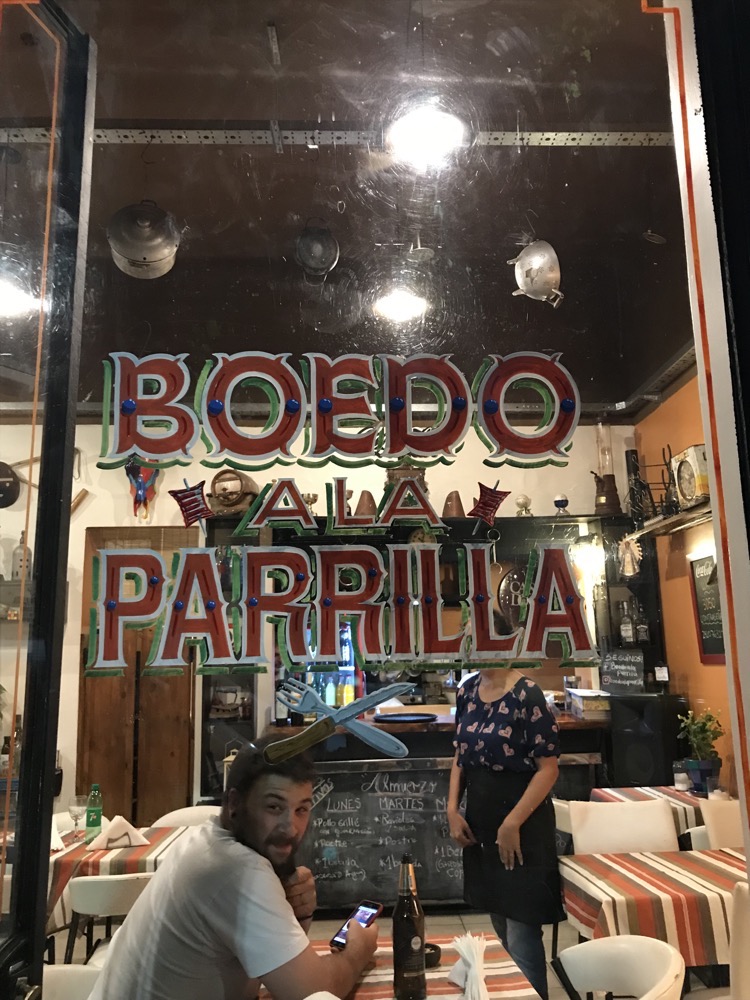 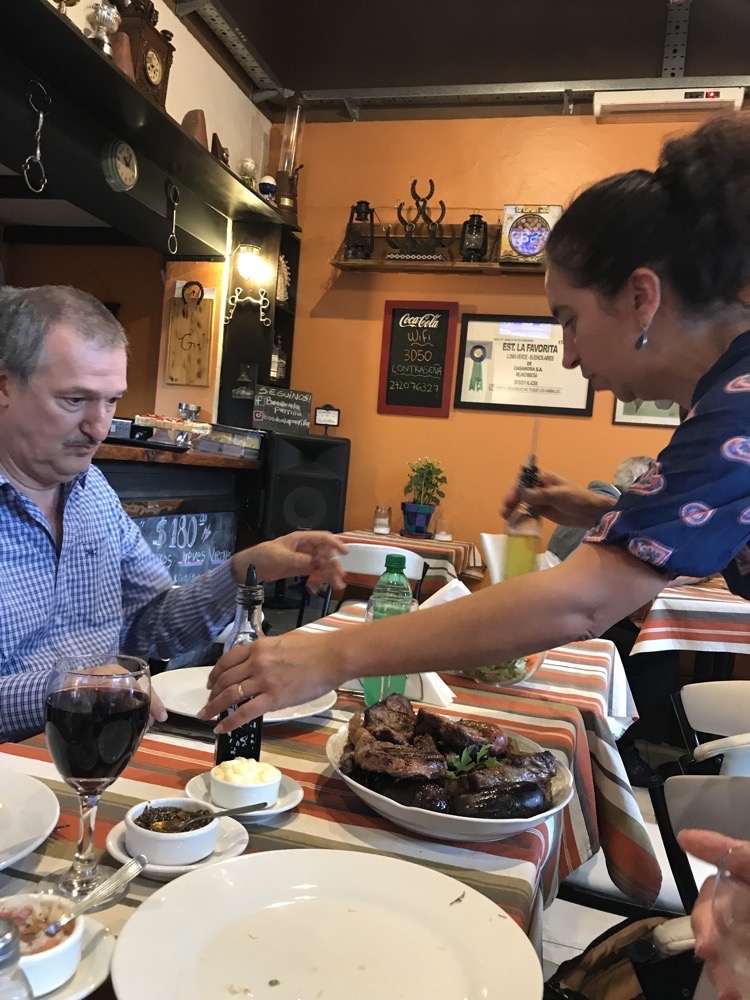 We had an incredible platter of BBQ’d meats – lamb, beef, chorizo, black pudding, and something that may have been offal or donkey (not sure).  Some wine, fresh bread and a token bit of salad and we were very happily recovered from our airline muesli bars indeed.  🙂 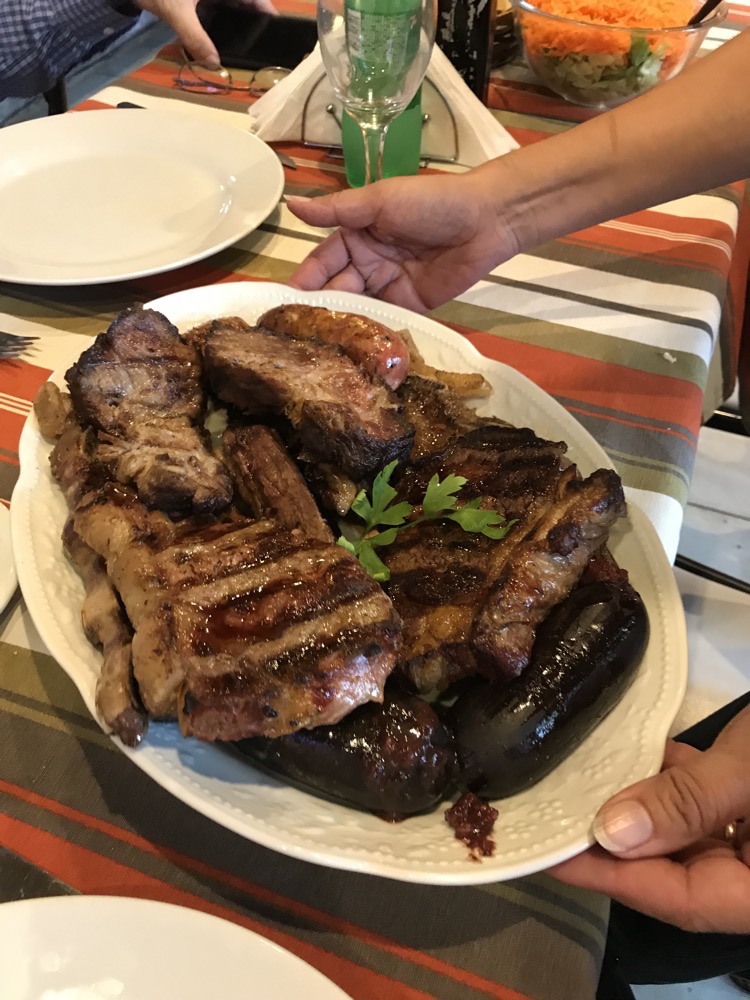 Sadly, dinner came to an end, and Jorge took us to EZE International airport to await our long-haul flight.  We checked in, and ran into Jessica and Louise, again.  Then found somewhere comfy to wait for our flight which was just after midnight.  The flight is much as these things always are, with extra bonus horrible thanks to the prat in front of me who reclined his seat within minutes of getting into the air, and of course, I’m still coughing from the end of the flu thing I have.  Thankfully though, we were able to wave away the horrible airline food as we had been stuffed full of wonderful BBQ meats and chimichurri goodness.

A movie or two later, and I thought I’d have a look at the live flight map (this is a big frequent traveller no-no, and should never be done – it makes the flight seem even longer than it is, if that is at all humanly possible).  But I did and discovered this: 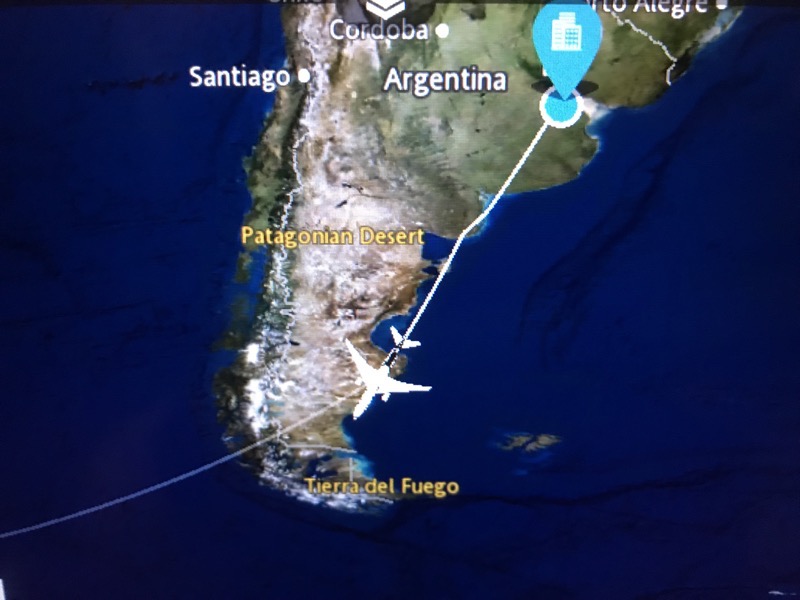 We were headed right back to Ushuaia!  If there were direct flights we could have knocked six hours flying time off the trip!  Arggh!  We had heard that the first flight to land at Ushuaia’s international airport was from Melbourne and had come directly over the Antarctic continent – but they don’t do that route anymore – not enough call for it.  Nothing to be done but to sit back and take all the drugs. 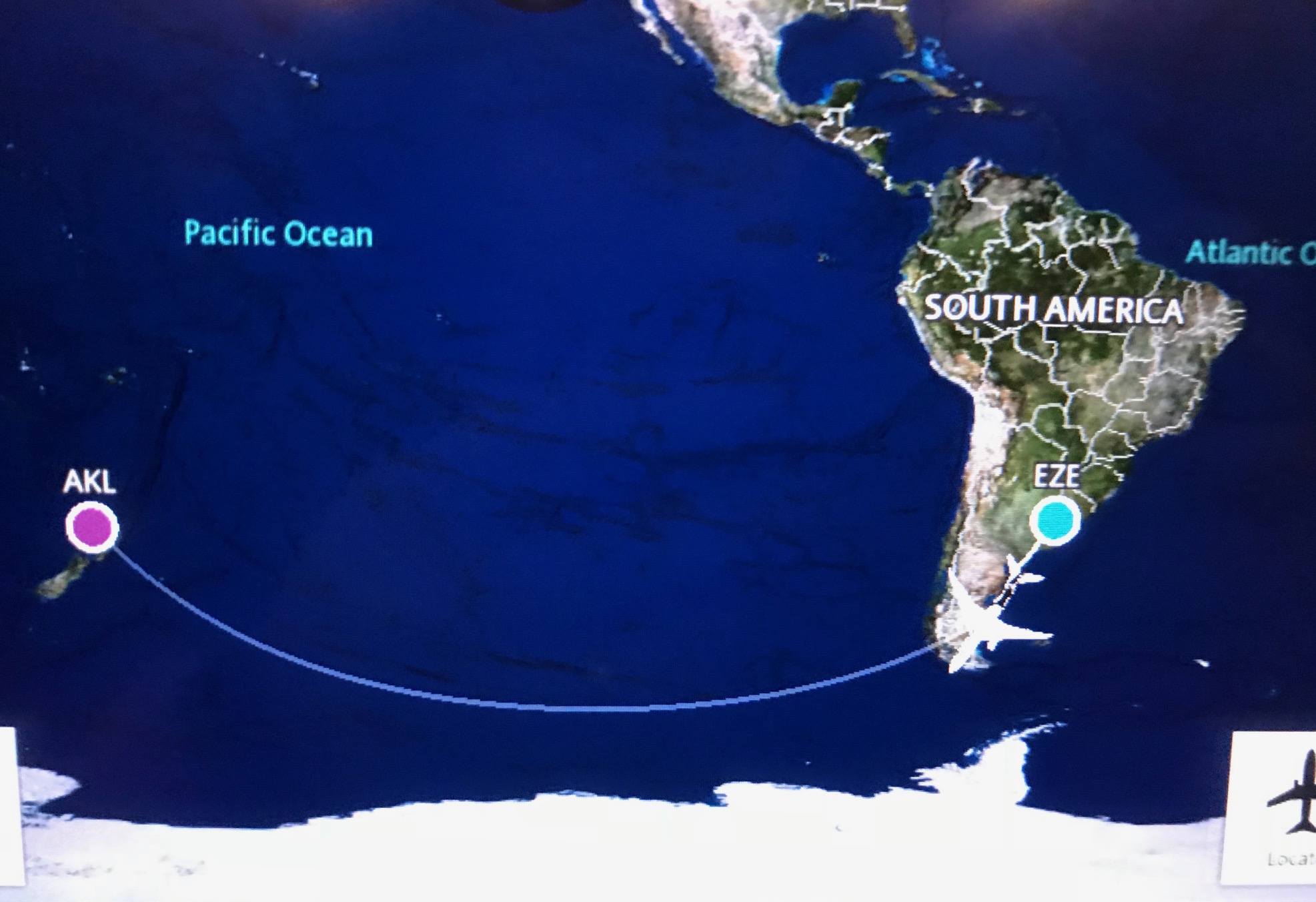 I managed to get some sleep on the plane, but won’t be admitting to how much of what medications it took to achieve that.  And eventually we arrived in Auckland.  There we had another three-hour layover (‘Hi, Jessica and Lousie, oh and Mark too) before we were to board to Brisbane.  Unfortunately, our flight was delayed by nearly an hour.  Fortunately (or perhaps miraculously) they seemed to make up most of that time in the air somehow – I’m not asking questions on that one. 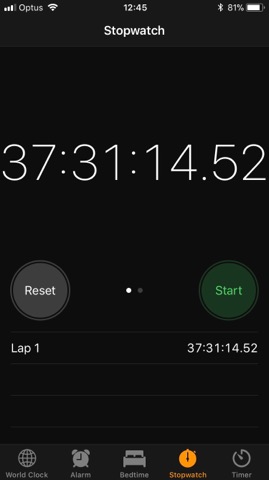 We arrived somewhat bedraggled and overtired and cramped and sore in Brisbane at 10:40am on a Sunday morning and all I wanted to do was collapse in a heap.  But, you know, can’t do that – you need to get on local time as quickly as possible.  All up our transit time was roughly 37.5 hours door (in Ushuaia) to door (in Brisbane)… but then as we were going through Customs at Brisbane airport, I mentioned this to Louise, and she said, ‘Well, actually, we left our travel destination, Antarctica, six days ago, so really, it’s taken us six days to get home.”  Eww… thanks for that, Louise!  🙂

So home again, home again jiggety jig… until the next adventure.  <3