Woke up this morning bright eyed and bushy tailed ready to tackle the city with verve…! Yeah, I can’t back that up.  We all pretty much woke up bleary-eyed and feeling like wrung out dish rags.  Long-haul flights and drastic time changes will do that to you – every. single. time.  We breakfasted at the hotel and decided to jump on the HoHo (Hop-On, Hop-Off) bus to get a feel for the place with minimum effort.  We have a walking tour booked for tomorrow, so we were trying to see different parts of the city that we wouldn’t see tomorrow.  The one area that wasn’t on tomorrow’s itinerary was the bright and colourful La Boca neighbourhood, so we decided we would ride the bus there and make sure we jumped off to have a poke around.

The primary HoHo terminal in Buenos Aires just happened to be directly across the street from our hotel, so we didn’t have to go far to get our day started.  Lined up, bought some tickets and jumped on the next bus.  Unfortunately, the upper deck wasn’t covered like they usually are and there is no way I was going to spend a few hours in the midday sun, so we sat downstairs which limits your ability to view the architecture.

La Boca is a barrio that has a strong European flavour about it – having been settled quite early in the city’s history by Italian immigrants largely from the Genoa area.  It has some winding little pedestrian areas called the Caminito, where local artists are creating and selling their arts in markets and shops.  It’s well known for its colourful houses that have been built up for tourism over the last few years and it attracts a lot of visitors who are interested in tango, local art, food and culture. 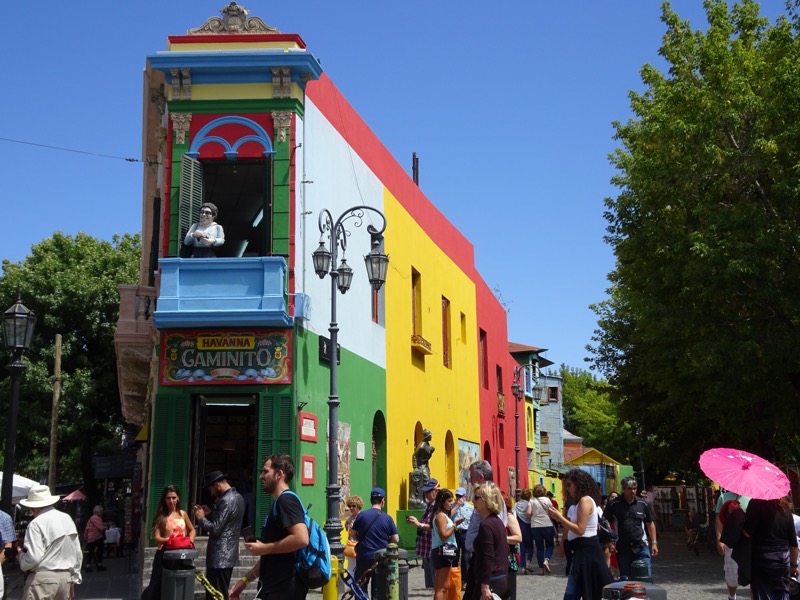 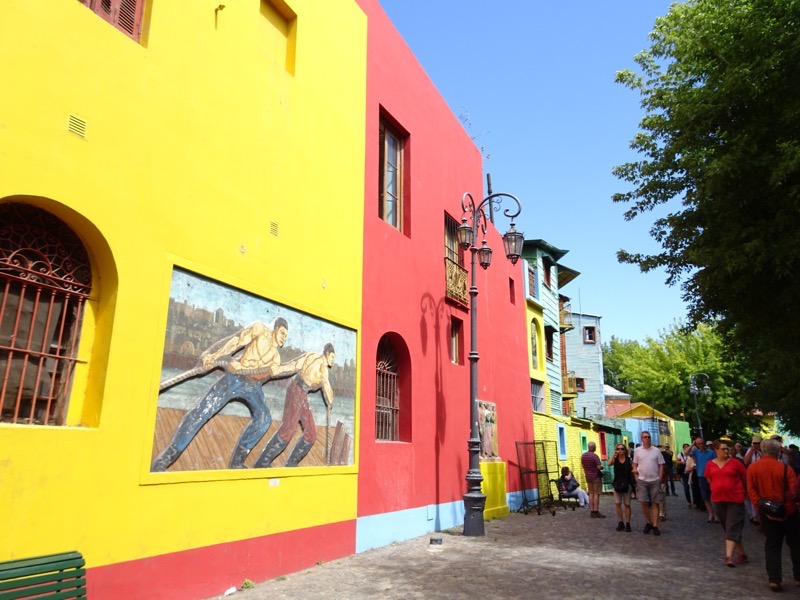 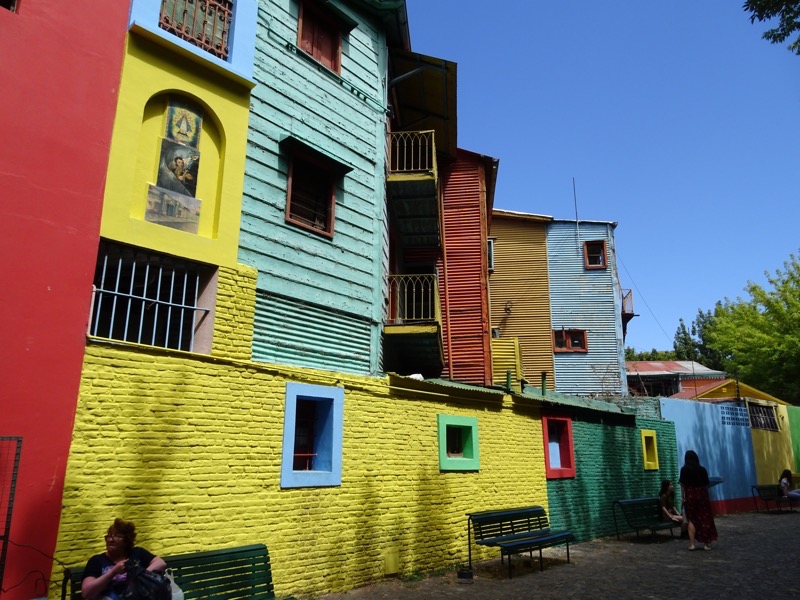 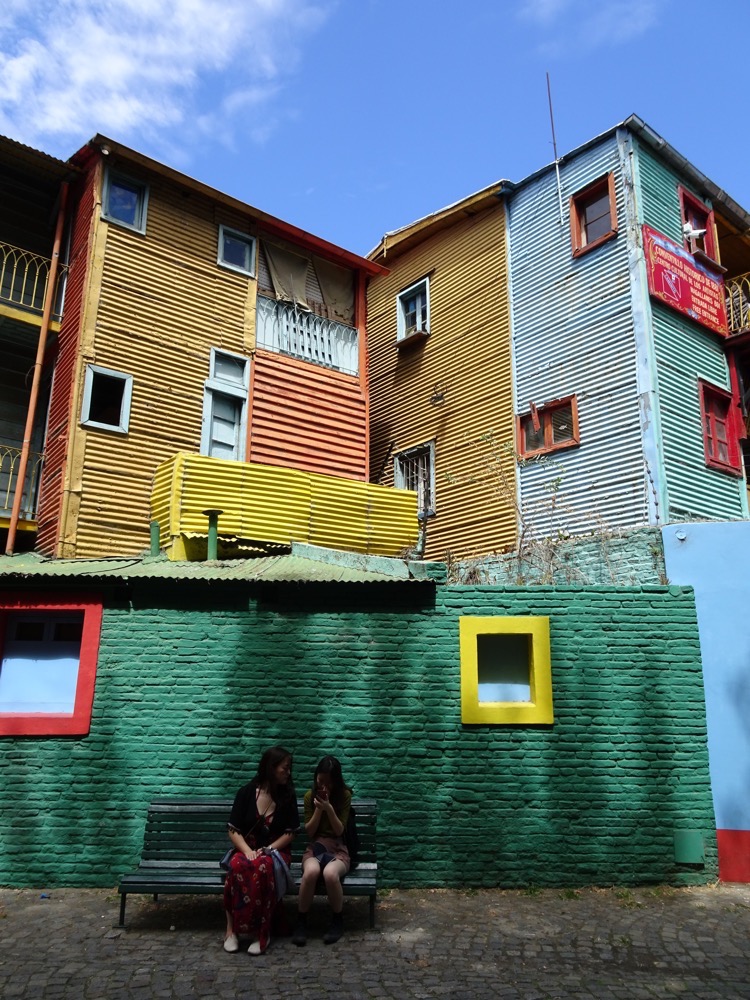 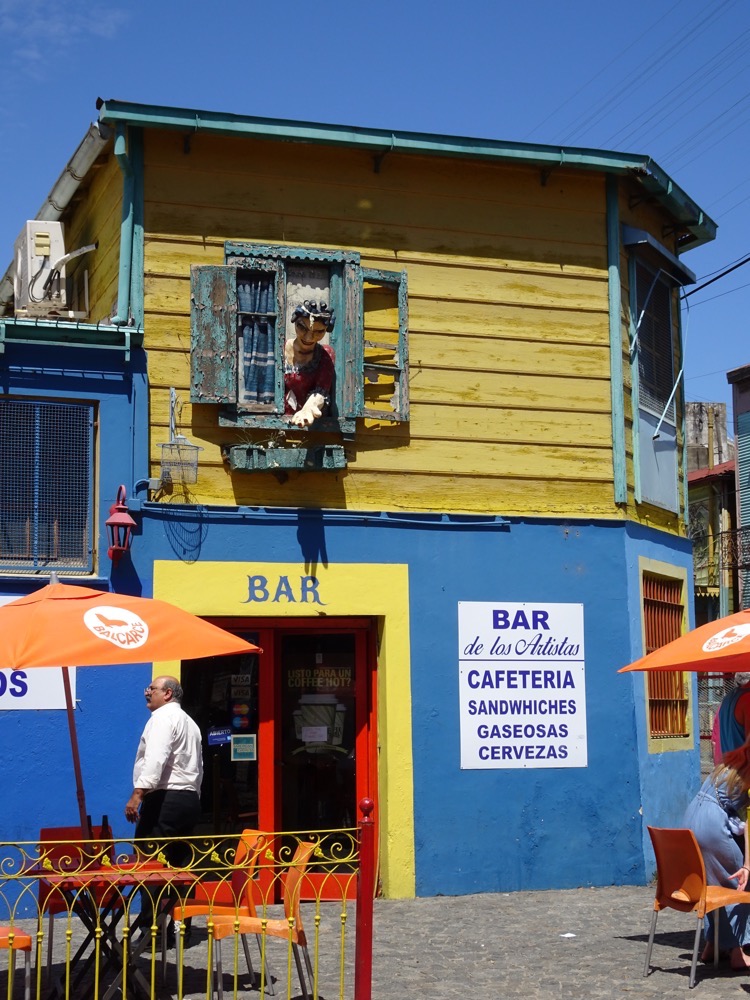 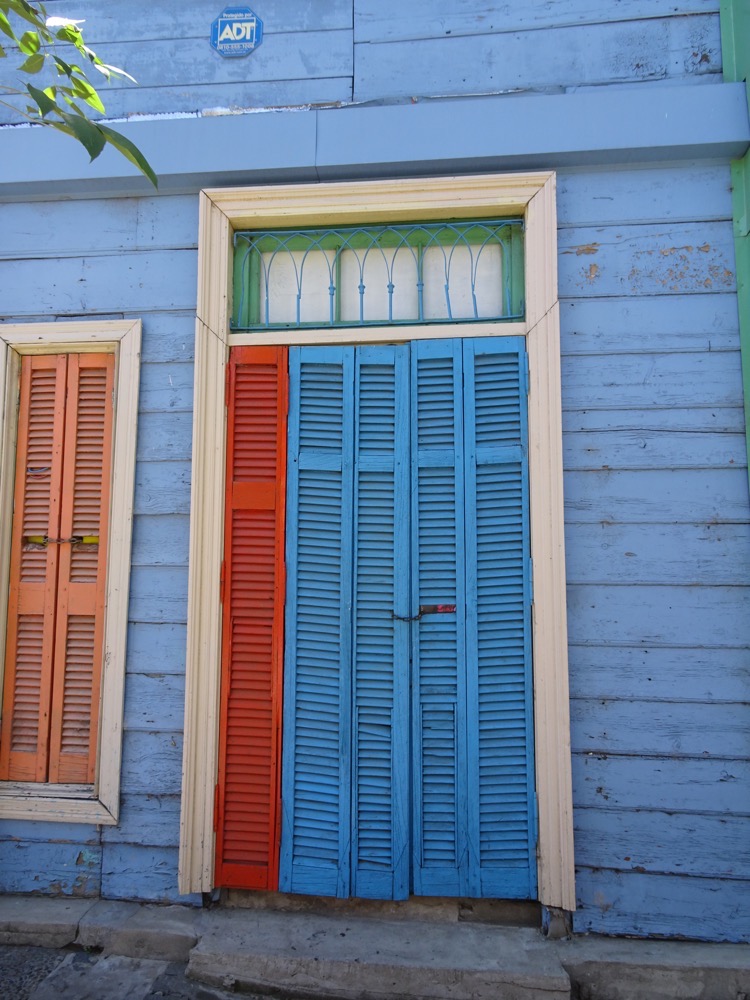 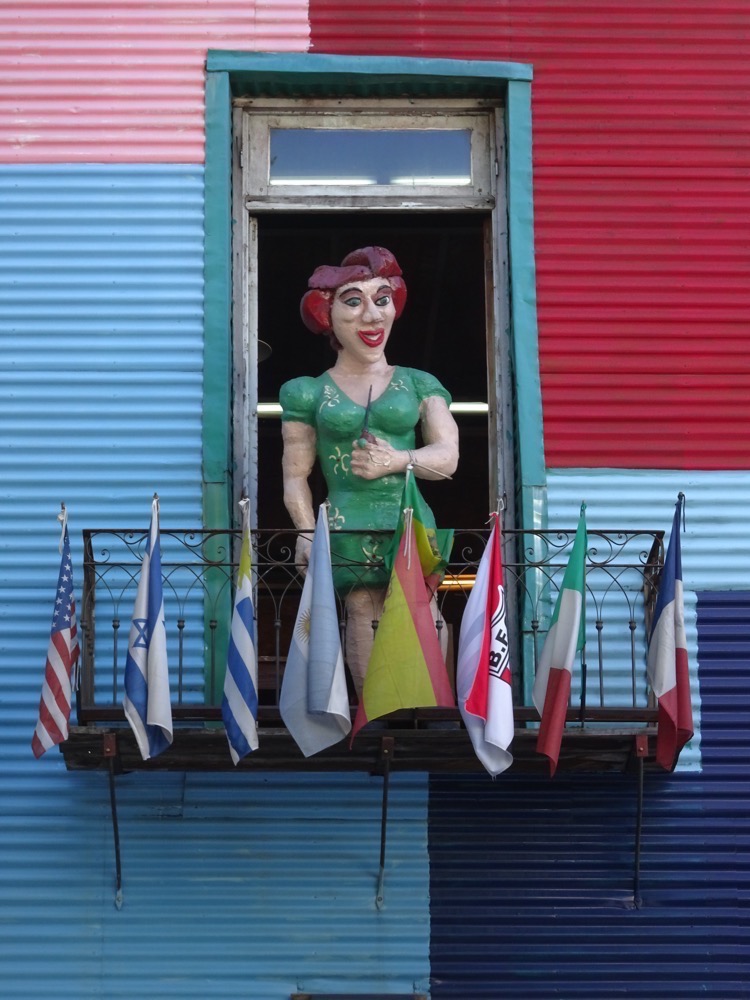 The buildings here are old timber and corrugated iron construction, but they have been brightly painted by the bohemian community that lives in the area.  Other than these few very colourful streets that are decidedly touristic, the wider area is quite poor and unfortunately known to be a high crime area. It’s a very funky little barrio though and well worth checking out – with lots of markets, cafes, souvenir stores, people dancing the tango at midday, and a cool buzz about the place. 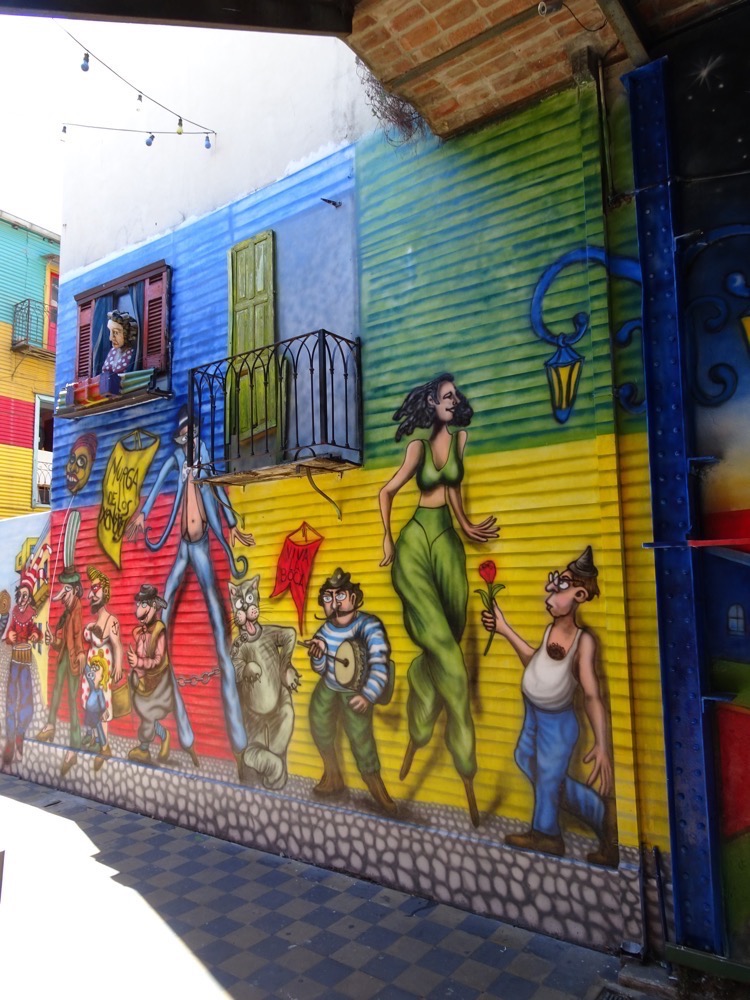 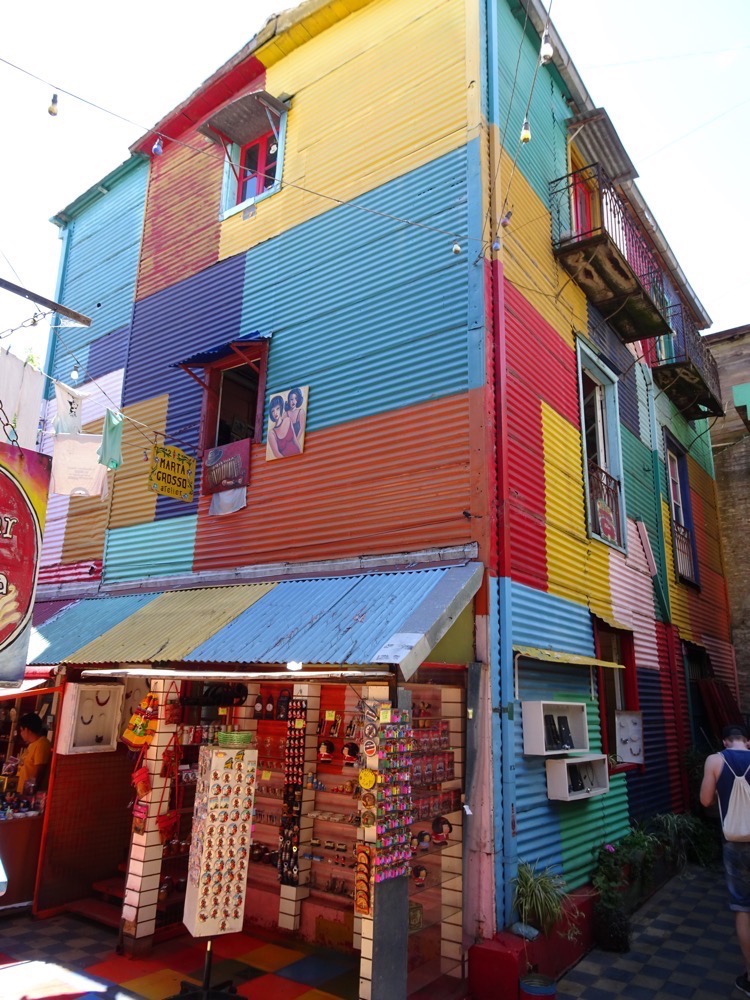 Everything that stands still appears to have been painted in bright colours creating a very festive and cheerful atmosphere.  The markets are full of bright and interesting souvenirs as well, with lots of artwork and plenty of toruisty stuff. 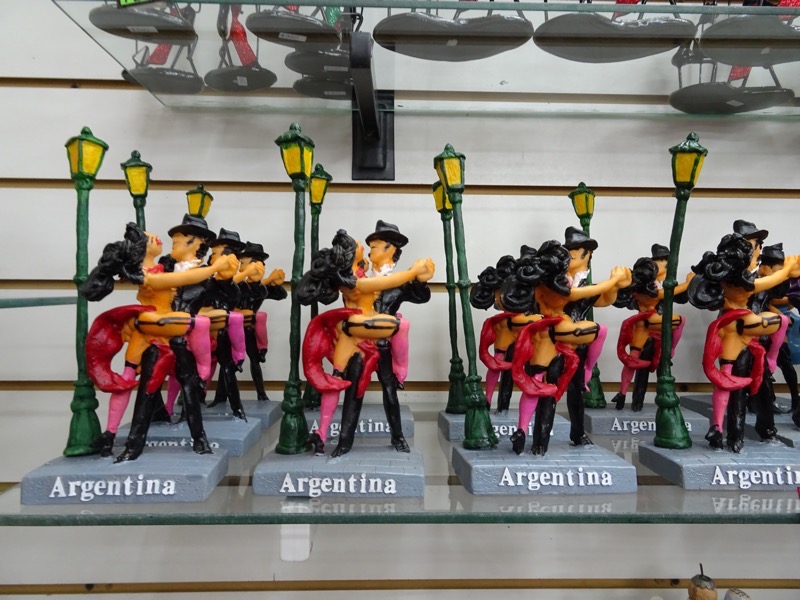 We had a good look around, found a cafe for some overpriced lunch and watched the tango dancers strutting their stuff intently in the front of the restaurant. After that, we hopped back on the HoHo bus and head back uptown to see some more famous buildings. I’m not a big fan of HoHo buses in general – the droning of the guided audio tour tends to be a poor quality and not very engaging commentary that just about sends me to sleep, but it is a nice way to meander through a city and get a feel for a place.

We stayed on the bus until it took us full circle back to our hotel, where we all had a bit of a kip before heading out for a late tapas dinner.  We ended up at a great little tapas restaurant a few blocks from the hotel called Tancat Tasca – the food was delicious and the sangria was excellent too. After that it was back to the hotel – we were all exhausted from doing what, I don’t know.  Probably the flight still catching up with us.