So our initial impressions of Sheremetyevo Airport were not so favourable – I mentioned how we came off our flight and were ushered down two flights of stairs into a tiny ‘holding area’ for two plane loads of people, with no rope lines to ‘assist’ with queuing before getting processed through customs…? Well, I found this map: 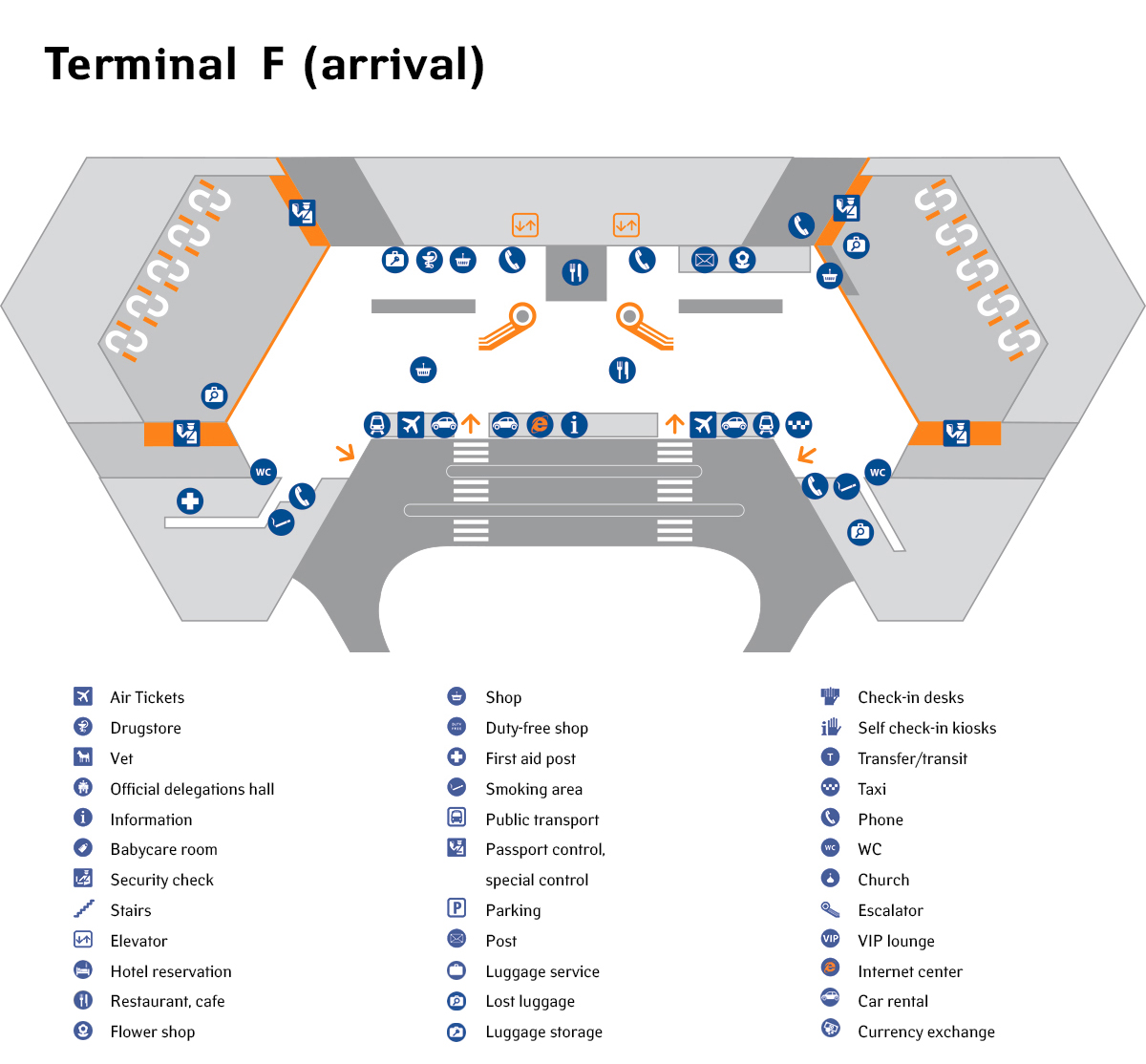 The holding area is the dark grey parallelogram shape at the top (left one for us) of this diagram next to the little customs dude icon.  The unlinked circular squiggles are a baggage claim area that is roughly the size of a usual baggage claim area… meaning the holding area was stupidly fucking tiny for 700+ people to wait, cheek to jowl, for over an hour. No wonder people were getting restless and in each other’s faces.  And what a bloody fire hazard!

Our, now cemented, impressions are that this place, this particular airport, is a Traveller’s Special Circle of Hell.  What a nightmare.  We left our hotel this morning early, very early, given that our transfer from the airport TO the city took a full two hours instead of the 43 minutes that Google maps said it should.  I had tried to look for an airport map of Sheremetyevo Airport on the way to Moscow in the in-flight magazine, as is my habit, but the maps were all in Russian and I couldn’t make head nor hide of it.  Then I promptly forgot all about it until we went to fly out through here this morning.

With the benefit of high speed internet, I have found one and provided it here for illustration purposes… it is much more detailed and useful than the mud map I saw on the plane. 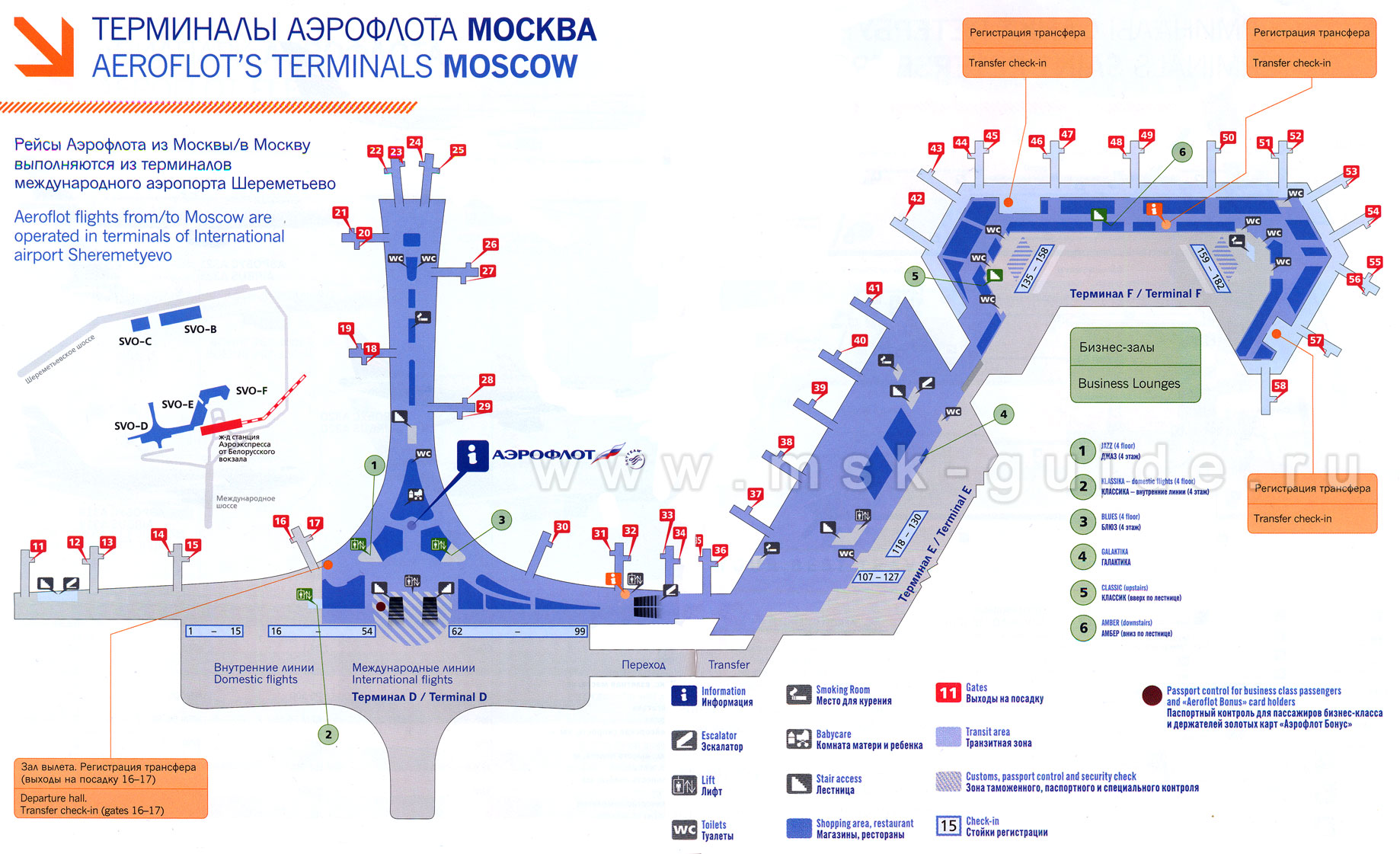 Our taxi driver dropped us off at Terminal D, as was indicated on our pre-checked in boarding passes that we printed out at the hotel, which is the grey funnel shaped area at the bottom of this picture.  When we went through the process of handing over our passports and dropping off our luggage, it was just in that first grey area where there was approximately 50 or more numbered check in counters. Vitaly, who checked us in, told us our gate had changed from Gate 5 to Gate 44 and he directed us to go to Terminal F to find our gate.  So, we walked all the way around to Terminal F (about 1.4kms) on the outside immigration and clearance, ‘grey area’, on the map, landing us at the red ‘i’ site on the concourse (it’s depicted just above the green text boxes in the map above).  When we got there, there were check-in counters all numbered 100-150, but no signs directing patrons to Gate 44 at all.  Each terminal has multiple security clearance entrance points, but we had no idea where we were going so we asked the lady as the ‘i’ site to check if we were in the right area.

Big mistake – we handed over our boarding passes, and the woman told us that we needed to enter through Terminal D!  Seriously?  Fucking unimpressed. It is at this point that I should probably mention that I have walked my chronically pained body more than 50kms on foot over the previous 3 days or so… which, while exhilarating and amazing things were seen, had left me in a state of more than usual sleep deprivation (it’s hard to sleep when your pain levels are up) and serious energy depletion all round.  So at this point, ‘Hey, you need to waste time and energy walking 1.4kms back the way you came!’ was NOT happy news.  I did what usually do in these situations though, and STFU, gritted my teeth and trudged back to Terminal D.  There’s nothing else to be done.

So we walk back the way we came and enter the customs area through Terminal D, only to finally find signs with numbered gate directions on them and wouldn’t you know it – Gate 44 was back in Terminal F only we now had to navigate the 1.4kms back there again, wiggling back and forth through the most overcrowded shopping centre you have ever seen. It is at this point I started to have to fight to hold back the tears.  My back pain is through the roof, my feet are stupidly sore and I’m done.  Just done.  This is what happens when expectations don’t match reality for chronic pain sufferers – I anticipated a fairly easy morning of check-in, find gate, sit and wait patiently for our flight to board.  When reality turns out to be an ever increasing amount of walking required, when I am already feeling shattered, I just had no energy budgeted to do this.

Additionally we discovered this wasn’t a normal airport concourse with large open spaces, lots of seating areas and a few shops scattered about.  No, it is full on, tight and tiny shopping centre that seems to incidentally to have planes arriving and leaving from it!  No shit…  So many stores, so few seats, and crowds of people to navigate around, as we walked all the way back to where we went originally.  A great deal of the signage directed you through the duty-free stores to find your gate too, so dodging ladies with perfume samples and display stands of alcohol were more obstacles to be navigated.

The further we went, the more incredulous I became. Nearly the entire gate ‘lounge’ area (and I use that term loosely, as there is no space to lounge at all), is taken over by shopping and retail past the immigration control.  I should have taken some photographs.  And not even useful retail spaces if they wanted people to spend some money – cafes and restaurants and newsagents or bookstores may have been more heavily patronised… no, all this area is taken up with duty-free alcohol and cosmetics stores, and stand alone Chanel, Rolex, J’Adore, Raybans and all sorts of other bullshit high end retail spaces where rows and rows of seats should be for weary travellers to sit.

We finally find our gate, which is squished in beside a Subway and yet another duty-free cosmetics store, and there are people standing around everywhere – and this is fun… people were sitting on the stairs that are marked near Gate 44/45 that leads to the upper part of the concourse.  So we drag ourselves and our hand luggage over to the flight of stairs where we can keep an eye on movement at our gate and finally plonk ourselves down to wait for our flight – on the cold hard and dubiously clean concrete steps. 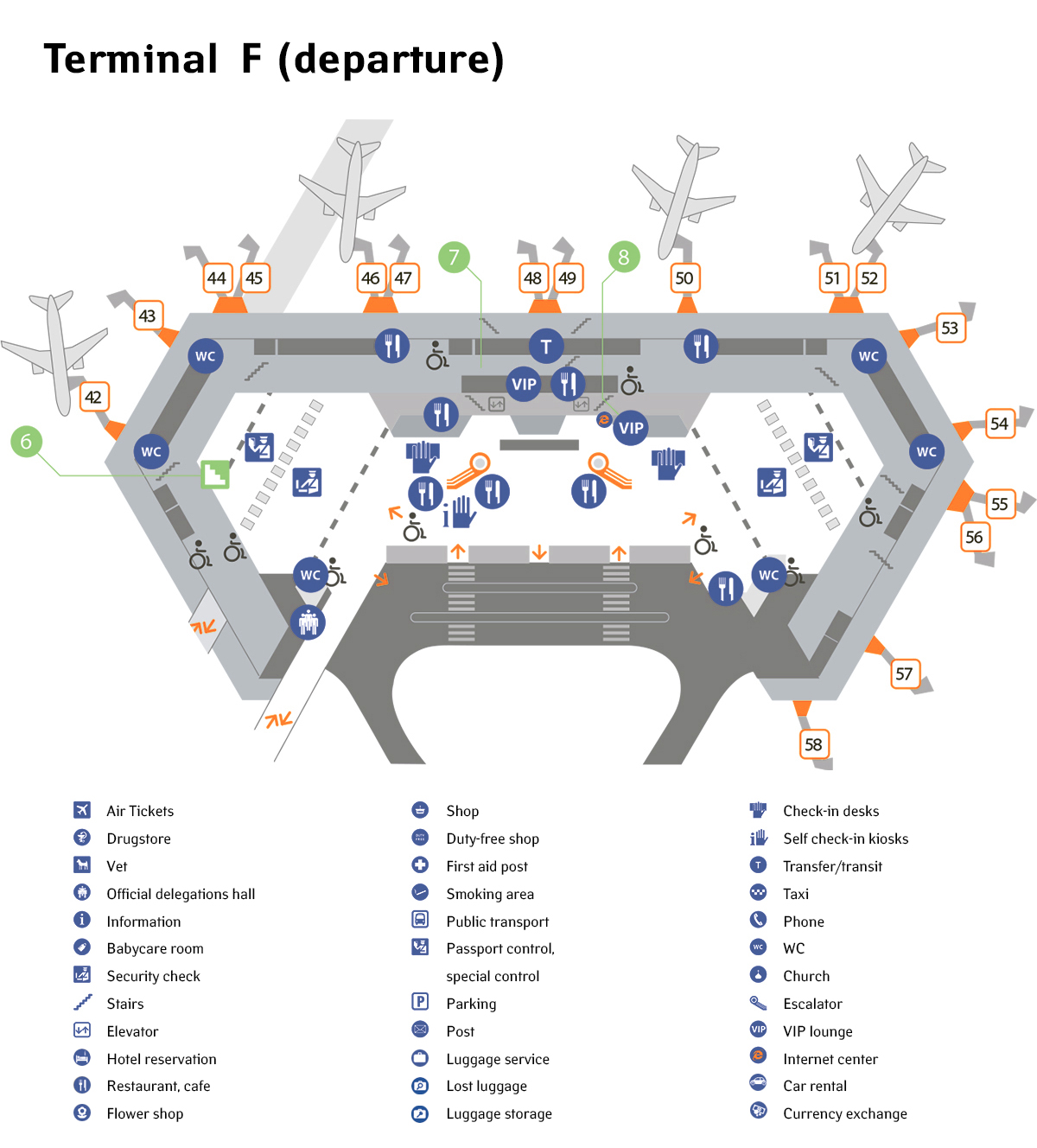 See this map?  And the icons for ‘Shop’ and ‘Dury-Free Shop’… note also how there are not present on the map?  That is because the entire map would have measles if they were included.

We sat on the hard and uncomfortable steps for about half an hour, watching the people enter and leave the ladies toilets, and for me, taking the opportunity to try and calm my pain and regain my composure,  And during that time, I saw no one, and I mean that literally, NO ONE shopping in these retail spaces. The staff were lollygagging around bored, and the travellers were all exasperatedly looking around for somewhere to sit.  If they had lined the concourse with cafes and restaurants people would have gone in, bought a drink and maybe a snack, just to have a chair to wait on instead of cramming onto the flight of concrete stairs with us.  I don’t get it at all.

Eventually we started to board and ‘lo and behold, two lines had formed on either side of the round Chanel counter/stand thing and then it became a bullshit, ‘can you people fucking merge politely?’ clusterfuck.  Jebus… not looking forward to coming through here on the way back, though mind you, now we know the lay of the land, we will just go find a seat in TGI Friday’s near the central D terminal and wait it out.  Though Mr K is likely to just go buy lounge access somewhere to skip the entire mess.

Sheremetyevo Airport – 2 out of 10.  Do not recommend.