I saw this today on Reddit, and realised I could easily write my a list of my own youthful experiences of what it was like to grow up female, and it would be a similar list of being imposed upon treated a certain way on a thousand different occasions, simply by virtue of my gender.  I can completely related to this, and no doubt it is just as relatable to the experiences of so many girls/women. The very fact this all reads so ‘normal’, is the very reason we still need the feminist movement constantly striving for equality. 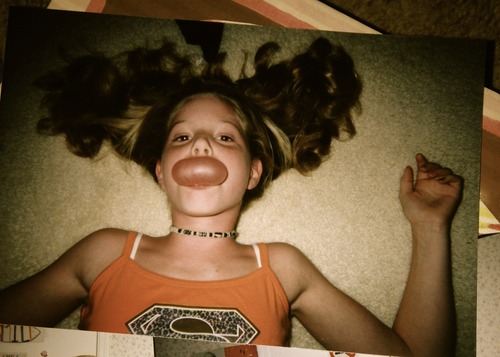 “In first grade, a boy named John— a notorious troublemaker—systematically chased every girl in our class during recess trying to kiss her on the lips. Most gave in eventually. It was easier to give in than keep running. When it was my turn, I turned and faced him, grabbed his glasses off his weasel face, and stomped on them on the hard blacktop. He ran to the principal’s office and cried.

In fifth grade, I was asked to be a boy’s girlfriend over email. It was the first email I ever received. He actually told me he wanted to send me an email, so I went home and made an AOL account. We went to a carnival and he won me a Garfield stuffed animal, and then he gave me a 3 Doors Down CD. A few days later, he broke up with me, and asked for Garfield and the CD back. I said no.

In sixth grade, a girl in my year gave head to an eighth grader in the back of the school bus while playing Truth or Dare.

In the summer after sixth grade, I kissed a boy for the first time at sleep away camp. He was my summer love. During the end-of-the-summer dining hall announcements, where kids usually announced lost sweatshirts and Walkmen, an older girl stepped up to the microphone, tossed her hair behind her shoulders, and proudly stated, “I lost something very precious to me last night. My virginity. If anyone finds it, please let me know.” The dining hall erupted into laughter and cheers. She was barred from ever coming back to the camp again, and wasn’t allowed to say goodbye to anyone.

In seventh grade, I told my brother I decided when I was older wanted a Hummer. What I really meant was I wanted a Jeep, but I didn’t know a lot about cars. My mother overheard and screamed at me for “wanting a Hummer.”

In the summer after freshman year of high school, I went to sleepaway field hockey camp with many of my close friends. One of them, named Megan, I had been friends with since kindergarten. One night when I was showering, she ripped open the curtain and snapped a photo of me on her disposable camera. I screamed. She laughed. We both laughed when I got out of the shower a few minutes later. After camp was over, her father took the camera to the convenience store to get it developed. When he gave the finished photos back to her, he said, “Your friend [Anonymous] has grown up.”

Sophomore year of high school, one of my best friends Hilary had a party in her basement while her mom was away. We invited some of the guys in our grade and someone’s older brother bought us a handle of vodka. One of the boys who came sat next to me in Spanish class. His name was Thomas. I remember playing a simple game, where we passed the bottle of vodka around in a circle and drank. I remember being happily tipsy and having fun, to suddenly being very drunk. Thomas and I started chanting numbers in Spanish, and he leaned towards me and kissed me. We kissed in the middle of the party, with all of our friends cheering. Then we went into Hilary’s bedroom.

Hilary’s bedroom was in the basement, on the ground floor, with a large window next to her bed. When someone went outside to smoke a cigarette, they realized it was a front row seat to what was happening in the bedroom. It was dark outside, and the light on was in the bedroom. They called everyone outside to watch. I don’t remember getting undressed, but apparently we were both completely naked in Hilary’s bed. A friend of mine told me later she tried to open the door and stop what was happening, but Thomas must have locked it. They said they pounded on the door. I don’t remember hearing them pounding. I don’t remember seeing everyone’s faces outside the window.  I remember Thomas holding my head down, and shoving his penis into my mouth. I remember trying to resist, pulling back, but he held his hands firmly on my head, pushing my face up and down. That’s all that I remember.

The next day, my friends and I went out to dinner at one of our favorite local restaurants. I couldn’t eat anything, and it wasn’t because I was hung over. Every time I tried to put food in my mouth, I felt like I was choking. Anytime a flash of the night before appeared in my mind, I felt like vomiting. My friends sat with me in silence. Then they told me a girl named Lindsey, who had briefly dated Thomas freshman year, had stood outside and watched the entire time. Even after everyone else stopped watching. My friends said they didn’t watch.

On Monday, Thomas and I sat next to each other in Spanish. We didn’t speak. We didn’t make eye contact. I went to the girls bathroom and threw up. I hear Lindsey and Thomas live together, now, ten years later.

Senior year of high school, I got my first real boyfriend. His name was Colin. He was on the lacrosse team with Thomas. He told me that sophomore year, Thomas told everyone on the team what happened that night at Hilary’s. Everyone cheered. Colin said that, even then, he had a crush on me. Even then, he wanted to punch Thomas.

Junior year of college, I lived in Denmark for the spring semester and studied at the University of Copenhagen. Copenhagen is one of the safest cities in the world. Guns are illegal there. Pepper spray is illegal there. One night, my friends and I went to a concert at a crowded club in a part of the city I didn’t know very well. I brought a tiny purse with money, my apartment key, and my international cell phone. For some reason it made sense at the time to put my purse inside my friend’s purse. Maybe I didn’t feel like carrying it. We were both drinking. My friend left the concert to go home with her boyfriend. One by one, everyone I was there with left the concert, until I was suddenly alone and I realized I didn’t have my purse, or any money for a cab ride home.

I started walking in the direction that felt right. I walked for a long time. I had no idea where I was, and didn’t recognize the area. It was almost 4 am. I was on a residential street when a cab pulled up next to me. I asked the driver if he could drive me to an intersection down the street from my apartment.

I don’t have any money, I said.
I really need your help, I said.
I will do it for free, he said.
Sit in the front, he said.

I sat in the front. We drove in silence for some time, until he pulled over on the side of a dark street.

I don’t want to do it for free anymore, he said.

He locked the car doors and reached across the center console and slipped his hand up my skirt. He grabbed my vagina. Hard. I pushed his hand away and unlocked the door. I ran down the street and realized he had taken me a block away from the intersection I wanted. I walked to my apartment and threw rocks at my roommate’s window until she let me inside. She yelled at me for waking her up. I escaped. Nothing happened. I was fine.

The summer after I graduated college I helped Hilary find an internship. She was an art major and wanted something for her resume besides waitressing. We found a posting on Craigslist to be a studio assistant for a painter in the Bronx. It was listed as an unpaid internship. The toll for the George Washington Bridge was twelve dollars, plus gas, but she got the internship anyway. She wanted the experience.

The artist was a 38-year-old Canadian painter named Bradley. Hilary was 22.There was another intern there, an art student from Manhattan named Stella.  Bradley needed assistants to help him make bubble wrap paintings. Stella and Hilary would take a syringe and fill the tiny bubbles with different color paints until it formed a mosaic. Bradley always had Hilary stay after Stella left to clean the paintbrushes and syringes. He told Hilary she was beautiful. More beautiful than his wife, who he only married for citizenship. He told Hilary they had a loveless marriage. He told Hilary he wanted to have her beautiful children. They began an affair. He told Hilary has wife knew and didn’t care. He told Hilary he was going to leave his wife soon.

Everyday Hilary drove to the Bronx, cleaned Bradley’s paintbrushes, and had sex on the studio floor. Everyday she went home with no money, and everyday she paid the toll at the George Washington Bridge. She needed the internship for her resume, she said. It was too late to find a new job, she said.

I could go on. I could tell you a lot more. About the whistles on the sidewalk, the kids who sat at the bottom of the stairs in high school to look up our skirts, my friend who was a prostitute in South Carolina, the men who’ve cornered me in parking lots and bars calling me a tease, the unwanted grabbing on the subway, the many times my father has called me fat, the time I traveled to the Philippines and discovered Western men pay preteen locals to spend the week in their hotel, the messages on OKCupid asking to “fart in my mouth.” About how I wasn’t sure if I had been raped because I was drunk and kissed Thomas back. How he raped my mouth and not my vagina, so that must not be rape. How easy it was for me to escape the dark street in Copenhagen, and how that made it not matter since “it could’ve been worse.”

Men have no idea what it takes to be a woman. To grin and bear it and persevere. The constant state of war, navigating the relentless obstacle course of testosterone and misogyny, where they think we are property to be owned and plowed. But we’re not. We are people, just like them. Equals, in fact, or at least that’s the core of what feminism is still trying to achieve. The job is not over. We’ve made great progress. There are female CEOs, though not very many. There are females writing for the New York Times and winning Pulitzer prizes, though not very many.  There are female politicians, though not very many. But these advances are only on paper. The job won’t be over until equality permeates the air we breathe, the streets we walk and the homes we live in.

I think back to how easy it was for me, in first grade, to feel fearless and strong in my conviction to stomp on John’s glasses. I felt right in reacting how I did, because John’s behavior was wrong. But his was an elementary learning of the wide boundaries his gender would go on to afford him. For me, it would never again be so easy.”