AN OPEN LETTER TO TONY ABBOTT FROM THE EDITOR:

Look, I know open letters are a bit April of last year, but I’ve been worried about you, Tony. Since the Leigh Sales interview when you were unable to articulate exactly who you are, I’ve been worried.

It’s a question most Australians are asked every now and again – in job interviews, by partners, by caring friends rolling around on the back lawn after one too many G&Ts, sometimes by our therapists. And as the Prime Minister and a man with more than a fleeting interest in spirituality, I’m sure at some point you’ve asked yourself the question, “Who the hell am I? What do I really stand for?”

But at 7.48 or 7.52 that evening, Leigh’s question seemed to rattle you. You became evasive. So in case you find yourself fumbling for an answer in the future, here’s who I think you are. (Feel free to quote me).

You’re a Christian guy. You’re the Christian guy who, when faced with appalling facts about the ongoing abuse and psychological torment of innocent children in our detention centres, chose to viciously attack the messenger rather than reflect maturely upon the incredibly sad and sensitive contents of the message. You’re that guy.

You’re the guy who condones shoving terrified women and children fleeing rape, persecution and death, (much of which we helped fuel), into little orange boats in the dead of night, sending them back into the darkness and uncertainty they’ve somehow managed to flee, hopeful of our shelter. That’s you with your whole “Australia isn’t for everyone” Jesus thing.

You’re the guy who’s been trash talking the economy for so long, most Australians are afraid to buy a pine-lime Splice let alone a car or a house. And it was you who in opposition said the so called ‘Carbon Tax’ would wipe towns off the map – something about a python squeeze not a cobra strike – when you knew that simply wasn’t ever going to happen. Is it all coming back to you, Tony? You’re that Henny Penny guy.

You’re the guy with the gay sister who stubbornly refuses to change his views on same sex marriage, despite her personal pleadings and the firm belief of most Australians that equality is long overdue. Represent, Tony! Step up! They mean you no harm. And if it’s about saying one thing before an election and doing another after… honestly, let’s not imagine anyone’s going to be too upset or surprised.

While we’re on that, you’re the guy who hounded the previous government TO DEATH over one supposed lie, promising an all adult, no surprises government of your own. I swear it was you boldly proclaiming you can’t say one thing in opposition then do another in office, before making brutal cuts in literally every single area you said you wouldn’t. Ringing bells, Tony?

You’re the guy who says he’s intimidated by the burqa then gets around in a bright red banana sling.

And forgive me for delving into personal irritations, but you’re the Rhode scholar guy who has to repeat everything twice, sometimes thrice, buying yourself time to formulate your next sentence. It’s an old orator’s trick Tony, but every frickin’ sentence?

While I could go on, I’m sure the electronic graffiti artists will be happy to continue this letter for me. And hopefully, next time Leigh asks for a little personal reflection, you’ll have a better idea of who you are. You’re that guy. 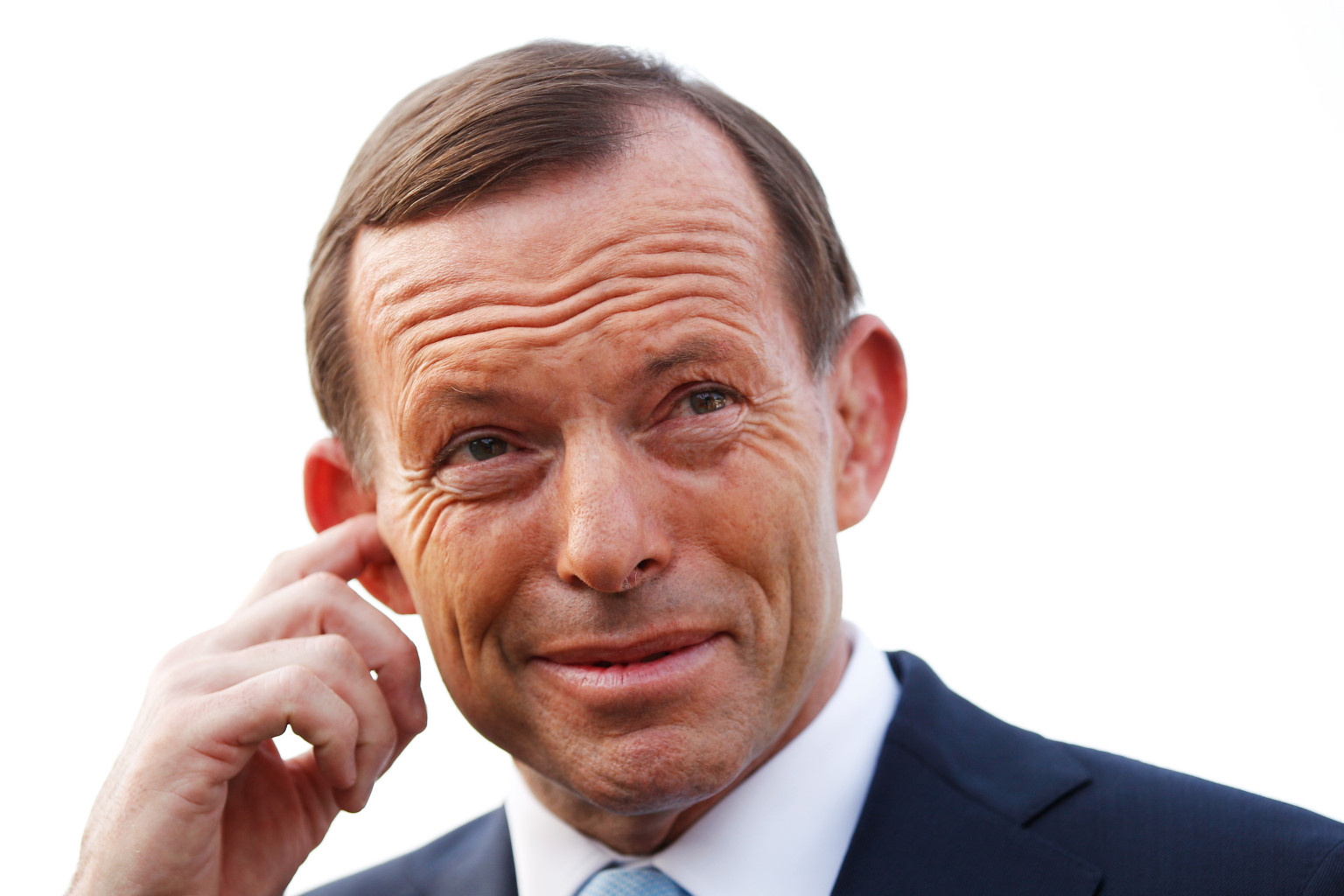 One thought on “Open Letter to Fuckwit Abbott”