OMFG.  What a bloody saga and a half.  Late last year, I had the Small Child’s passport replaced – passports for kids only last five years and so he’s onto his third one already (well travelled, spoiled brat of a kid that he is). The bureaucratic hoops that need to be navigated to renew a child’s passport in Australia make you go through the whole kit and kaboodle… effectively filling out an entire ‘new application’ form complete with endorsed photographs and a guarantor and proof of existence from scratch.

So this week, I go to get my passport renewed too. I get online, fill out the online form and print it out (Only two pages?! Immediately worry that I’ve missed something) check the list of shit that I need to take to Australia Post to lodge a passport application – old passport: check… printed form: check… two unsmiling photos, one signed by a guarantor: check.  Rock up to the Post Office just this Tuesday gone, and stand in line for a little bit, thankfully they’re not too busy, but get to the front of the queue with my form and my photos and my passport and get told, “You don’t need a guarantor for an adult passport renewal”.  “Oh I read the checklist for lodging passport applications and it said you did need endorsed photos” (It’s the same checklist for all applications on the Australia Post website btw), but thanks for letting me know.” … “No, these photos are no good, we need ones that aren’t signed on the back”… “You’re kidding right?  I got my Small Child’s passport renewed only two months ago and he needed a guarantor, so why does this application not have this requirement?  And if endorsed photos are considered superior and actually harder to obtain, why then, are these being rejected?”… somewhat sheepishly the customer service lady, Donna, said, “They just don’t want signatures on adult renewals.  Sorry.”

Grrrr!  Is it too much to ask for a bit of bloody consistency? Will have to go home, get some more photos (foolish me for only bringing the 2 with me that I thought I needed instead of all 8 they gave me when I had them taken!) and go later in the week.  What a waste of time.  Le sigh.  :/

Fast forward to today, Friday, and back I go again.  Same lady, Donna, behind the counter.  I hand over my unendorsed photos, my passport and my application form and then watch as she puts some template thing over my photos and says, “These photos are too small, and they have a red tinge to them. They’re not acceptable.”

Hold on a minute, lady.  At this point (after a bad day of poor legal advice and BDM Registry bullshit), I was in no mood for more bureaucratic bullshit and certainly not from Australia Bloody Post.  Unfortunately Donna had just put herself squarely in the firing line! “Excuse me, these are the exact same photos that you rejected on Tuesday because they were inadvertently endorsed, and on Tuesday you said nothing about them being too small or having a reddish tint to them. Is it too much to ask that if the application was going to be rejected, that the ENTIRE application be checked to ensure there is not more than one problem with it?  Why did you not tell me that these photos did not meet the photographic requirements on Tuesday?!  What the fuck, sort of Mickey Mouse operation are you lot running here?!?  To which Donna replies, “I’m sorry, I didn’t check them on Tuesday, I only looked and saw they were endorsed and they shouldn’t be.  Would you like me to take some new photos of you now?” … “You didn’t check them on Tuesday which is going to necessitate me coming back for a third time!  No one has time for crap like that.  And NO!  Look at me?  I’ve been doing housework all morning, my hair is not neat,  I’m not wearing any make up, I’m an absolute mess – and you want to take a washed out ghost of a photo for a document that I have to live with for the next TEN BLOODY YEARS?!  I don’t think so.  So that’s a NO. I don’t want you to take my photo right now, but thanks for wasting my time!” And I stormed out.  Very. Fucking. Pissed. Off.

Grrrr, Grrr and fucking grrr, some more.  Abso-fucking-lutely furious and ready to fucking explode at anyone who looks at me sidewards.  ARRRGGGHH!

Whinge at Mr K and yale that the cunts at Australia Post are completely incompetent and then finally calm enough to switch into problem solving mode.  I am NOT wasting more time coming back for a third attempt to lodge my passport renewal. What to do, what to do.  Spy a discount pharmacy!  That’s a good start.  Walk in, find the Revlon counter, grab a tester of Colourstay Natural Light Ivory and a mirror.  NEVER in my life have I tested make up on my face (too much of a germaphobe for that sort of thing), but desperate times call for desperate measures.  I start liberally applying foundation in the itty bitty mirror when a sales clerk comes past and says ‘Can I hel…” she gets a look from me that very much say, “What of it?” and moves on past me rather quickly.  Next, some eyebrows… have a hunt for some suitable eyeshadow… done and done.  Look at the eyeliner testers and think ‘No way, not now, not ever!’ (my inner germaphobe obviously has limits and was absolutely not going to let me stick a tester eyeliner anywhere near my eyes!). So I grab a nice brown eyeliner off the shelf, and a Maybeline ‘Blackest Black’ mascara.  Sprint to another aisle and pick up some cheap hair combs and head to the register and out with the fantastic plastic to buy some make up I didn’t really want to buy today!

Quickly found the nearest shopping centre ladies room, and finished off my hastily started make up job and combed my hair.   Sigh.  Need to calm down for a minute and let the boiling fury dissipate until my face regained it’s more accustomed non-rage fuelled complexion.  Breathe.  Just breathe.

Back I go to the Australia Post office, I’m sort of hoping I get the same chick at this point… but I didn’t.  One of her colleagues took some more photos for me, and then the damn application, that I was truly sick of the sight of, was lodged within about ten minutes flat.  Now the stupid thing was out of my hands, I realised that I had *maybe* over-reacted towards poor Donna, who kinda also bore the brunt of the fact that I’ve been getting bad info from some lawyers, the Births, Deaths and Marriages Registry and Monash University this week, and was completely over all types of bureaucratic administrivia bullshit for one week.  I admit that I did go a bit over the top in asking Donna to self assess if she was completely incompetent, and decided to apologise to the poor lady for my reaction to the bad advice she gave me earlier in the week.  Yes, I know. It was a sort of backhanded apology… she gave me bad info, but she certainly didn’t deserve the both barrels of foul temper which I blasted her with earlier.  She seemed relieved after I spoke with her, and I hope she didn’t go home saying to her family ‘Customer are fuckers’… which is what I would have done if I had made a mistake like that, and then copped it big time from said fucker/customer type.

Le sigh.  When did we all become so inflexible.  It’s not like the photo isn’t going to be scanned into a computer then scaled to exact preferred size anyway?  Harumph.  Too many fucking rules governing every little thing we do… or can’t do.  🙁

My anger at the passport renewal cock ups did take away from the usual tinge of melancholy that sometimes occurs whenever I’ve renewed a passport – all those stamps in my passport going into the memories and not still alive and well in my current travel history.  This passport took me to New Zealand (six times), Vanuatu, New Caledonia, UAE, all over Turkey, Pakistan, Canada, and all four corners of the US (Alaska, San Diego, Florida and Maine!).  One thing I won’t miss though is the Pakistani Visa that was front and centre in my passport causing me to be held up by Homeland Security each and every time I went through an airport in the US… oh dear lord did that thing get me some funny looks and a lot of furious tapping at computer terminals by every customs agent and TSA officer I encountered… 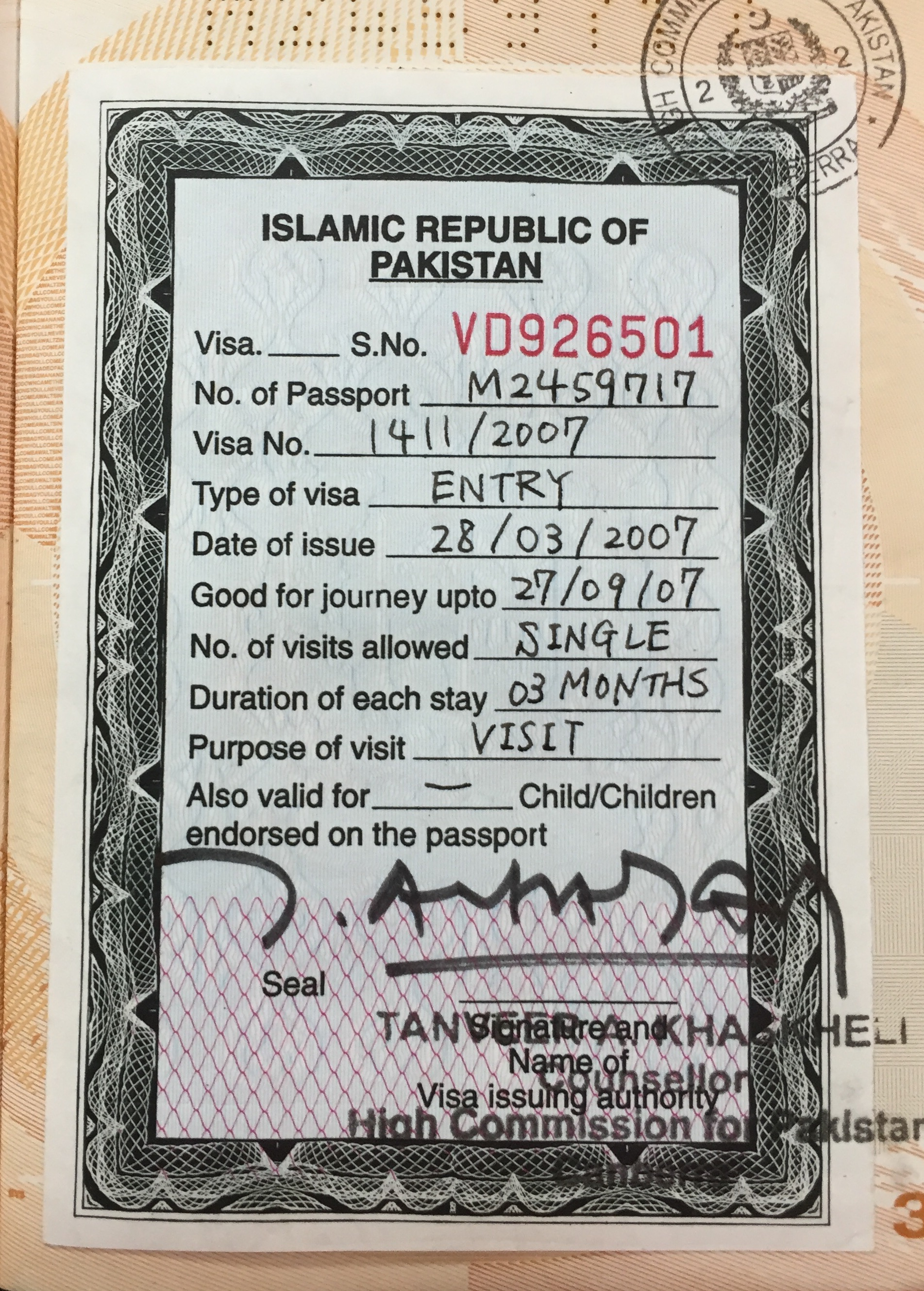