Wanted:  One gestational surrogate – aka an angel or a miracle worker.

As is advertising for a surrogate or surrogacy service, in any form whatsoever.  In fact, what I just wrote above is probably considered ‘technically’ illegal, or it would be if I wasn’t just thinking out loud, and it was published somewhere more serious than on my inane blog.

Mr K and I are currently looking for a surrogate to help us have another child, using one of the ten little embryos we have sitting in the freezer – the same ones that have been burning a hole in my heart every time I think about them for the last seven years.  The problem is that searching for someone, when you are legally constrained from advertising for them, is quite difficult and fraught with pitfalls.  According to the fertility specialists, you just ‘jump on those surrogacy forums and web pages, there are hundreds of women around who want to surrogate for people like you’… and when you dive into the forums, it’s true.  There are women all around the country who are prepared to be altruistic surrogates for infertile couples… but how do you find someone you can trust?  How do you build that sort of rapport and confidence in someone that you’ve just met?!?  It’s a bit of an impossible ask.

But even bigger than the issue of finding a suitable and willing surrogate who actually has our best interests (and the best interests of any potential children) at heart, is that the legal framework surrounding surrogacy in Australia is inherently flawed.  It neither protects the intended parents (IPs) nor does it protect the surrogate birth mothers.  The central tenement that the law revolves around an idealogical concept that the state will never force a woman to give up a child she has carried and nurtured… that is, if the surrogate mother changes her mind she is under no legal obligation to give the child to the intended parents, even if she has indicated it was her intent to do so, even if she has signed legal contracts to that effect, and even if she has no actual biological link to the child.  As a potential intended parent, that scares the absolute hell out of us.  That you could entrust someone with your precious little embryo, and they could grow and nurture that embryo into a beautiful little child that I never could, and then if they change their mind at any point and keep the child, and use, as the intended parents; have no legal rights over our own genetic child. 🙁

The other side of the coin – the legislation doesn’t protect the surrogate mothers very well either. This is a far less likely scenario and is a bit of a wild, pie in the sky, ‘what if’ – but In the unlikely situation that a child is born with a undetected congenital defect or suffers an extremely rare trauma during birth or any one of the number of unusual complications that can occur during pregnancy and childbirth, the intended parents can at any time refuse to accept responsibility of the child, leaving the surrogate mother, literally holding the baby – because according to the legislation, the child is legally hers until a parentage order and a re-issued birth certificate are sorted at one month of age..  So fucked up on so many levels.  I could never turn my back on my child but it turns out that some people can.  I’ve even heard of situations where childless couples have gone for surrogacy and then refused to accept their own genetic twins back, because apparently they only wanted one little miracle not two!  Yes, that is an extreme example, but there are some unconscionable nutters out there.

Which brings me back to the original topic.  If you are hoping to enter into an altruistic surrogacy arrangement with someone you have literally just met through one of these Families Through Surrogacy forums, how on earth do you ensure that all parties involved have the same goals, the same expectations and the same intentions?  How can you be sure they are going to follow through on the contracts that you’re both required to complete, when the legal framework in place is insufficient to enforce them?  It’s all good and well that clinics make all people involved go through counselling, but ultimately a handful of counselling sessions seem insufficient to ensure that an endeavour of this immensity doesn’t go south.  One counsellor I spoke with said that the best surrogacy arrangements stem from long established friends, or family members, acting as surrogates – because the people involved already have a perhaps longstanding desire to help the infertile couple.  But how do you approach someone to do something like this for you?  It’s just so huge, I think… quite literally the biggest thing you could ever do for another human being.  :/

And I thought IVF was an emotional minefield. 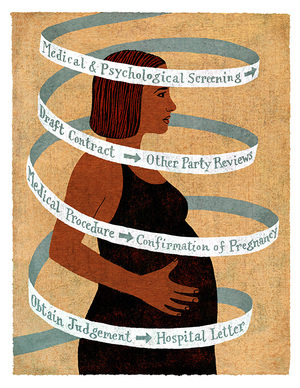