Can’t believe I finally got to see Ka! Well, come to think of it, I can’t believe I am back in Las Vegas barely 9 months since I was here last, but I go to Ka! (Which is the proper exciting bit, of course). Last year, when I was in Alaska with Aunty Mary, there was a tragic accident at Ka – one of the performers fell to her death during a performance, causing an immediate enquiry and a temporary cessation to all scheduled performances for the following three or four weeks – which was when we had tickets to go see it. Of course I was disappointed not to be seeing the show, but I remember spending a lot of time thinking about that woman and her family, and how her death must have effected the cast of the show as well. I never thought I’d be back here with another opportunity to see it… 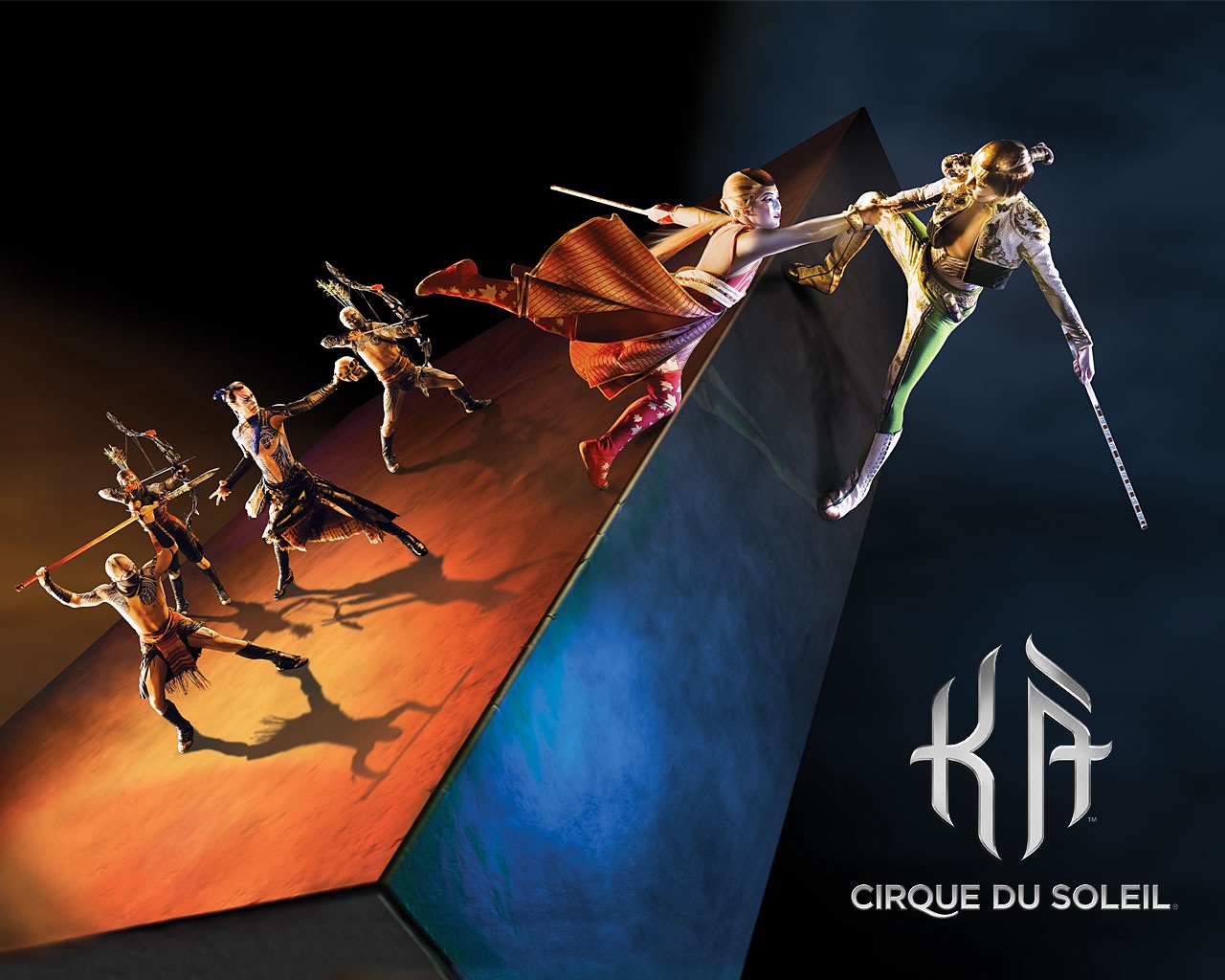 The show opens with a narration of a plot – bit of a first for a Cirque show in my experience, they are usually light on plot or based on more esoteric themes rather than narrative. This is the story of twin brother and sister, who get separated and embark on a journey of self discovery, doing battle with Ka to find destruction or enlightenment… or something along those lines. 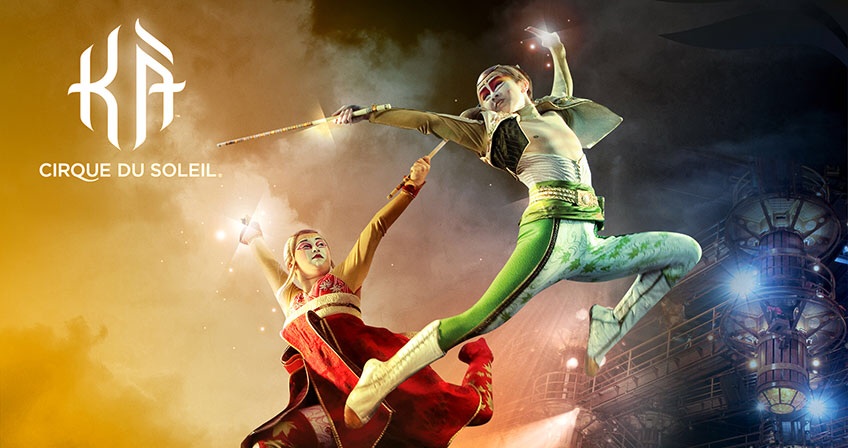 The real business of Ka is the spectacle; while it is unlike any other Cirque production with it’s story line, it definitely follows the Cirque modus operandi when it comes to providing a truly memorable visually arresting production. The experience starts with the purpose built theatre, the large dragon greeting you near the bar, through to the theatre space itself, which provides an impressive space that envelops the audience. 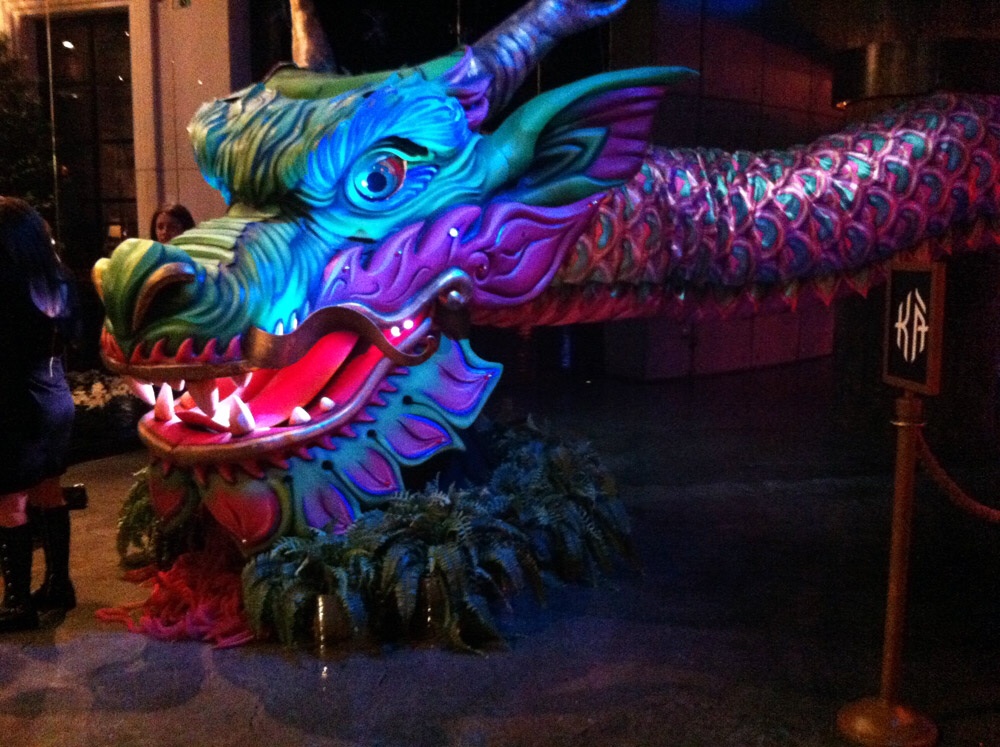 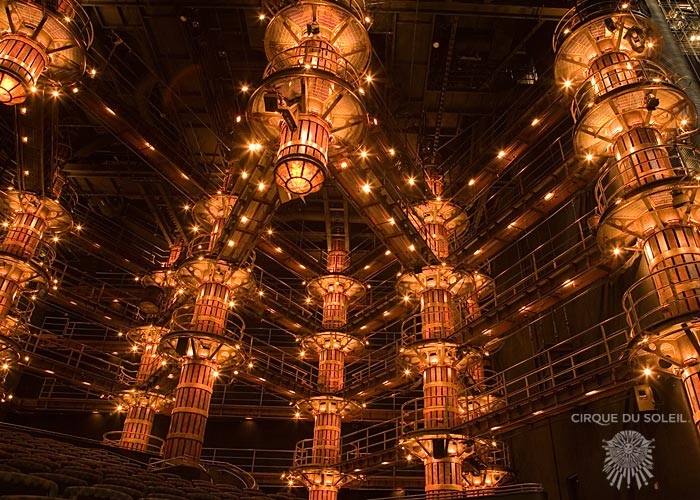 There are many great characters in the production displaying the full array of creative, gymnastic, and acrobatic talents that we associate with Cirque productions. Somehow they have even made baton twirling appear exciting and stimulating. 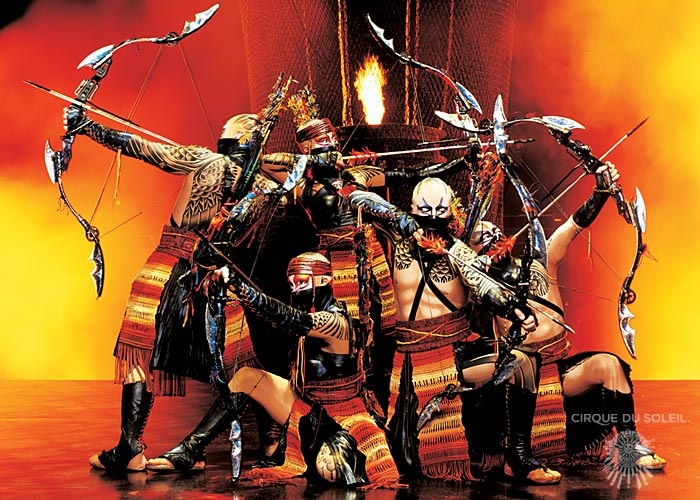 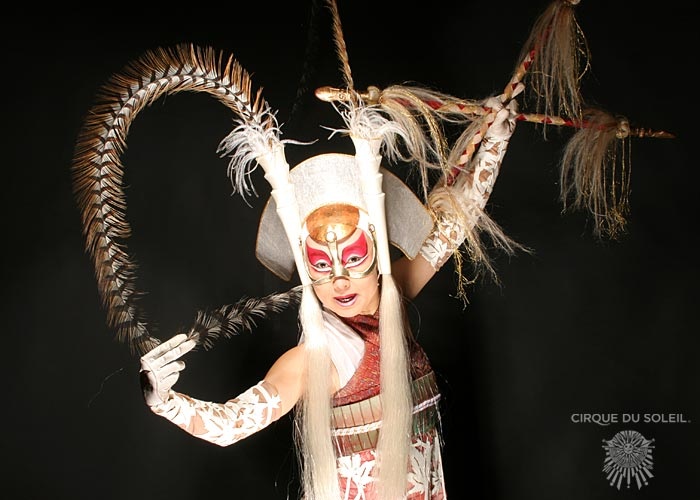 I also particularly loved the ‘clowns’ or the comic relief element that is in most Ka shows and usually brings everyone back down after a particularly impressive act. In this show they appeared as creatures, like a turtle, a crab, a starfish and a centipede. In keeping with most other Cirque shows, the ‘clowns’ do not speak and work predominantly in mime which allows them to communicate exceptionally well across language barriers. 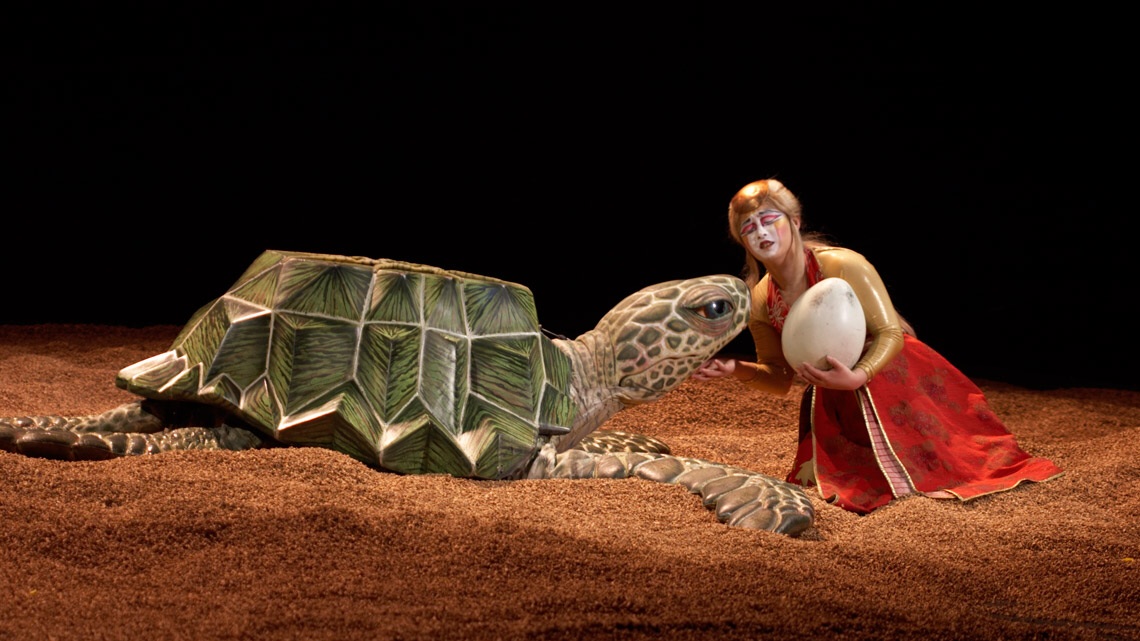 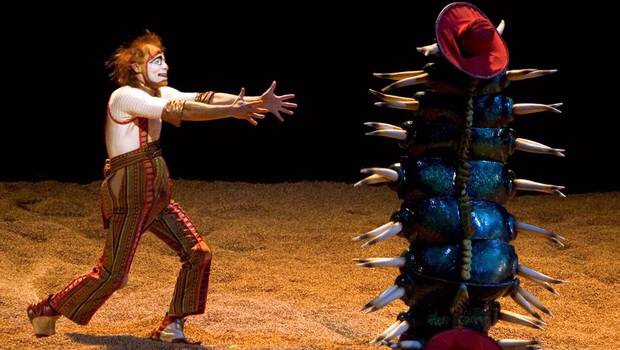 But one of the real starts of this show, the importance of which shouldn’t be underestimated, is the unique Ka Theatre. The stage itself is without a floor and instead operates with two large, elevating platforms and five smaller lifts which move the workspace and the characters around. There is a ship platform which flails violently out over the audience, another platform covered in gravel for quiet scenes which then tips up and allows a fast paced climbing/acrobatic scene. The stage itself is a technical marvel and may well be one of the most sophisticated stage designs ever seen. Without it and the large purpose built apparatus, Ka just would not work. 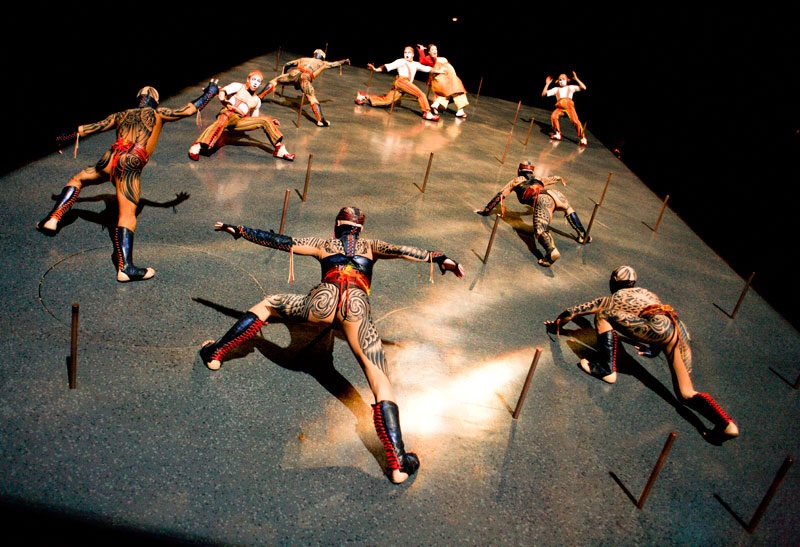 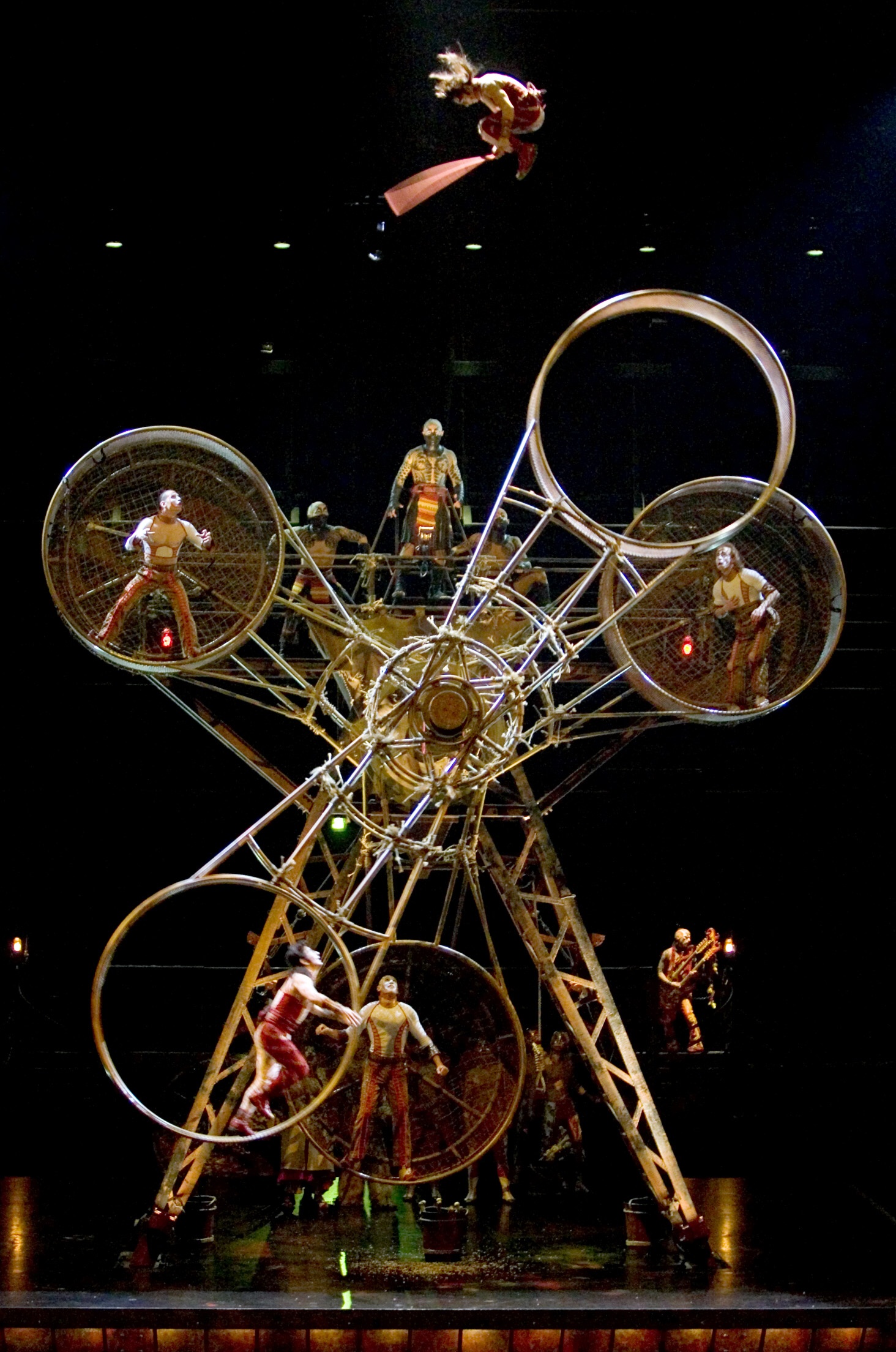 At the end of the show we were almost rendered speechless – the show is soo good. Many people dislike the unusual (for Cirque) plot and feel it detracts from what they came for, which more often than not is to see the impossibly talented performers doing unbelievably difficult things – so Ka tends to pull mixed reviews. I think you need to know what you are getting into before you line up… Ka is a Cirque show, full of physically demanding and breathtakingly difficult and yet beautiful acts, but it is also a production brimming with theatrical drama and brash spectacle. Well worth seeing, imho. And Mr K (who was not really warming up to the Cirque) absolutely loved it – enough to ponder the possibility of going to see it again before we left! Now there is a recommendation for you1