I’m not exactly the poster child for acceptance and resignation.  The idea of accepting things we can’t change is somewhat alien to someone like myself, who has spent their life pushing shit uphill with a shovel to try and achieve the things I desperately want to achieve.  So I kinda get the whole ‘just can’t let go’ thing.  For once though, I am not sitting here writing about infertility or chronic pain or arsehole uni supervisors.  What I was thinking about is Australia Day and the socio-political nightmare that it has become.

I don’t really remember Australia Day figuring largely in my childhood.  In fact, I can’t really remember celebrating it in any special way at all.  This could be because we were often off camping at Stradbroke (or similar) at this time of year, or more likely that Australia Day barbecues with friends and family have all melded together with the other general myriad of reasons why we would get together and indulge in the same things – barbecues, beer, swimming, sun, sand and all the rest of it.  I don’t recall wearing or waving little Australian flags in my youth… in fact, I think you would have been hard pressed to find Aussie Day paraphernalia when I was a kid.

I’m not sure who first decided that non-Indigenous Australians needed to feel bad about celebrating the fact that we love living in Australia, by re-labelling Australia Day as ‘Invasion Day’, but I don’t honestly think it has done anyone any favours.  Contention and divisiveness of this nature will never help bring communities together.  On the one hand, you have indigenous Australians dwelling on the various horrors early European settlers committed upon first coming to this land over 200 years ago – and subsequently fostering a discontent and animosity in their communities and, very sadly, in their youth.  Much of this history is being read between the lines as indigenous Australians did not have a tradition of written history prior to the arrival of the Europeans.  And I sometimes wonder how much of that ‘reading the unwritten’ is potentially selective, designed to push various political agendas… Yes, there were many, many truly heinous mistakes made… but can Bruce from down the street do anything to really fix it?  Nope.  Not a damn thing.

And on the other hand, you have the Australians of European descent feeling confused and variously affronted at being made to feel guilty over something that 1) we did not actually do personally, and 2) we literally had, and still have, absolutely no control over.  Yes, there are many elements of our shared history that are remnants of a less enlightened time, which I am sure every one of us would change if we were given an opportunity to do so – but no matter how much reconciliation and public acknowledgement of the tragedies of our collective past, there are just so many things that we, the modern citizens of Australia, can not change.

None of us can change our history… it’s simply not possible.  No one is denying that unimaginably horrid things that occurred in the past that are completely acceptable to us now.  We acknowledge and accept that these things happened to real people – but we are all at a complete loss as to how to rectify the situation.  All that can be done now, is to rewrite and rewrite and rewrite that shared history to shift focus onto the dreadful atrocities committed by these long dead white men.  But this seems a futile or even an empty gesture; attempting to appease people who are somehow stuck or trapped living with this past, unable to forgive or forget it.  It seems too, that people wilfully hanging onto the crimes against their fore bearers also strangely want the rest of us to be continually confronted and even defined by it as well.  The figure of our shared history looms too large for indigenous Australians to forget it, while at the same time white Australians are completely impotent to adequately alter it.

Being Australian and wanting to celebrate Australia Day does not mean we are not mindful of the mixed emotions some people have towards this shared history, nor does it mean we have forgotten it.   Sure, there is always going to be that yobbo who thinks that ‘Straya Day (Fuck, I hate hearing that term – to me, it’s a huge flashing neon sign saying we are not investing enough in education) is about boozing up, and fat slabs of steak, and getting sunburnt playing backyard cricket, who puts little to no thought into the politically delicate minefield that Australia Day has become, and who thinks that Indigenous Australians ‘have just gotta get over it, mate’.  And, you know, sometimes I despair that that yobbo is in the majority, largely due to over representation in the media – the same media which appears to be working it’s best to make us feel bad about being proud to be Australian on Australia Day.  We are not all that yobbo, but you gotta wonder if he has a point.

There is currently a vocal movement lobbying to move Australia’s national day of celebration from it’s current position on the calendar to a different date.  January 26th… the date chosen to celebrate the arrival of the First Fleet in Sydney Cove in 1788.  January 26th is not exactly the ‘Invasion Day’ date these lobbyists make it out to be.  It is not the date Australia was first ‘discovered’ by Europeans.  It is not the date of any of the documented horrific massacres of indigenous Australians.  Nor is it even the actual arrival date of the First Fleet – the First Fleet fleet turned up in Botany Bay somewhere between the 18-20th of January and if memory serves, weather prevented all ships from landing safely in the Cove until the 26th, though some were thereon the 24th or thereabouts.  So it was an arbitrarily chosen date to celebrate an anniversary on from the get-go.  And while I applaud the ideology behind attempting to make all Australians happier about our shared history and heritage, I wonder – would choosing another arbitrary date to celebrate being Australian make any real and/or tangible difference to those who currently feel disenfranchised by celebrating on January 26th?  At the end of the day, I don’t think so.

Because I keep coming back to this one inalienable fact:  We could change the date – but we can’t change the history.  We can not undo the wrongs that have been done in the past – no matter how much we might wish to, or how many dates we arbitrarily move around on the calendar.  It’s becoming glaringly obvious that token gestures, apologies and official speeches of reconciliation are not sufficient to alleviate the damage that has been done to the collective imagination of Australia’s indigenous people…  So we can change as many dates as may be, but somehow I strongly doubt it would make a lick of difference in the hearts of the people who find offence where none was intended. 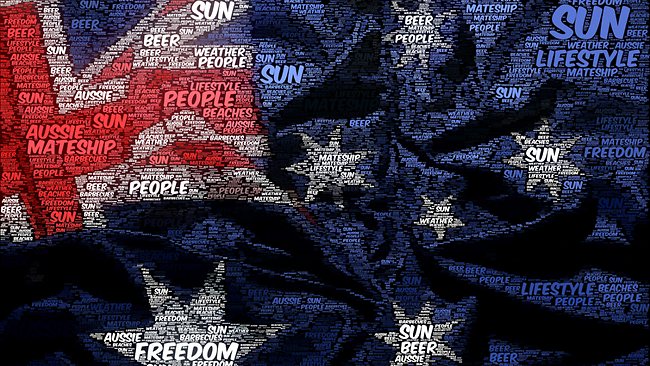