I read an article, ’11 Untranslatable Words From Other Cultures’  that focused on a handful of words that are completely untranslatable into the English language without resorting to an entire phrase to replace one elegant word.  Most of these words encapsulate a universal human experience that occurs in the English speaking world, but English simply does not have single words to represent these concepts.

Which immediately reminded me of a ridiculously long and equally obscure Inuit word which reflected a uniquely Inuit practice, but which was annoyingly eluded me and has been on the tip of my tongue for days.  So I started to search for it… and instead I found a whole collection of other awesome, yet untranslatable, words from other languages.  Naturally, through my research I have been unable to find the original Inuit word I was looking for..  :/ 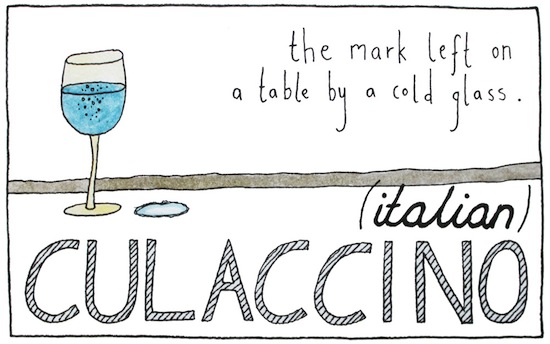 Mamihlapinatapei – Yagan (indigenous language of Tierra del Fuego) – “The wordless, yet meaningful look shared by two people who both desire to initiate something but are both reluctant to start.”

Donaldkacsázás –  Hungarian – Literally translated as “Donald Ducking” but refers to the act of wandering around one’s house wearing a shirt and no trousers like the beloved Disney character. 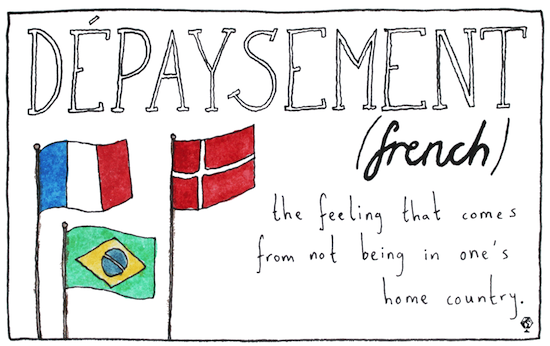 Litost – Czech – The state of agony and torment created by the sudden sight of one’s own misery.

Drachenfutter – German – Literally, “dragon fodder,”. Refers to the gift German husbands bestow on their wives when they’re the doghouse, IE: have stayed out late or they have otherwise engaged in some kind of inappropriate behaviour.

Ya’aburnee – Arabic – Morbidly beautiful this word means “You bury me,” and is a declaration of one’s hope that they will die before another person, because of how difficult it would be to live without them. 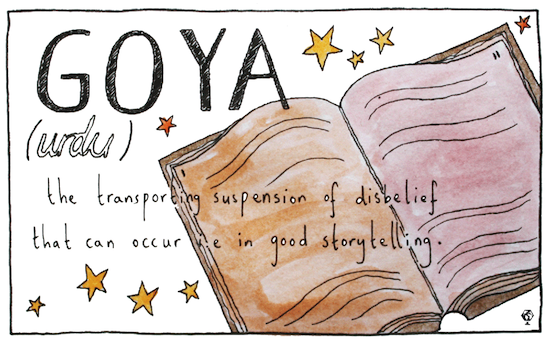 Kyoikumama – Japanese – “A mother who relentlessly pushes her children toward academic achievement.”

Ponte – Italian – While it literally means “bridge,” this word also refers to the concept of taking an extra day off taken to make a national holiday falling on a Tuesday or Thursday, into a four-day vacation.

L’appel du vide – French – Literally, “the call of the void”, this French expression is used to describe the instinctive urge to jump from high places (not sure this one counts, it’s more a phrase). 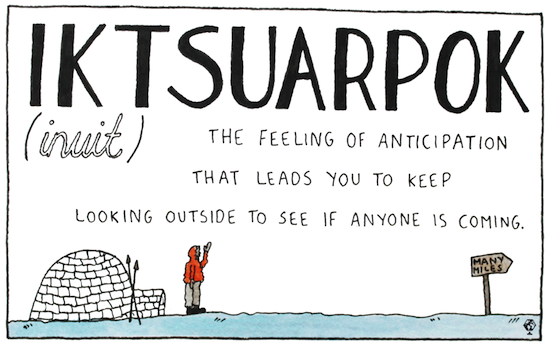 Tartle – Scottish – The act of hesitating while introducing someone because you’ve forgotten their name.

Duende – Spanish – refers to the mysterious power that a work of art has to deeply move a person, though it was originally used to describe a sprite-like entity that possessed humans and creates the feeling of awe of one’s surroundings in nature.

Bakku-shan – Japanese – A woman that looks attractive from the rear but not from the front. 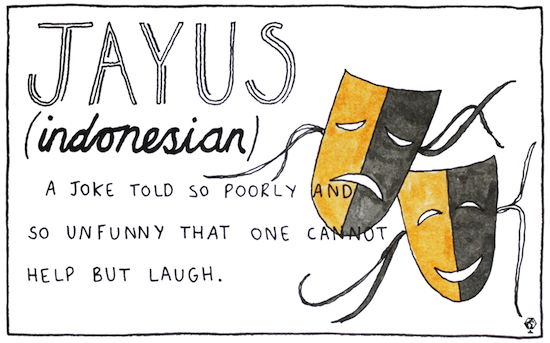 Ilunga – Tshiluba (Southwest Congo) – the willingness to forgive and forget any first abuse, tolerate a second abuse, but never forgive nor tolerate a third offence.

Dozywocie – Polish – Many cultures acknowledge this concept, but Polish sums it up in a single word, it refers to the parental contract with children that guarantees offspring lifelong support.

Saudade – Portuguese – this word refers to the feeling of longing for something or someone that you love and which is lost. 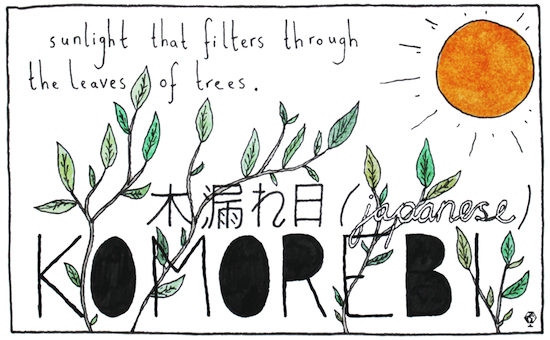 Prozvonit – Czech – The act of calling a mobile phone and letting it ring once so that the other person will call back, saving the first caller money.

Wom-ba – Persian – Describes the smile of a child as it sleeps.

Lingam – Sanskrit – Refers to the symbol of the erect penis or phallus used as an object of veneration and worship.

Takallouf – Urdu – Loosely translated as “formality,” it often refers to the prodigious amount of preparation put into hosting a tea or dinner.  However, it also refers to a deeply ingrained social restraint so extreme, as to make it impossible for the victim to express what he or she really means. 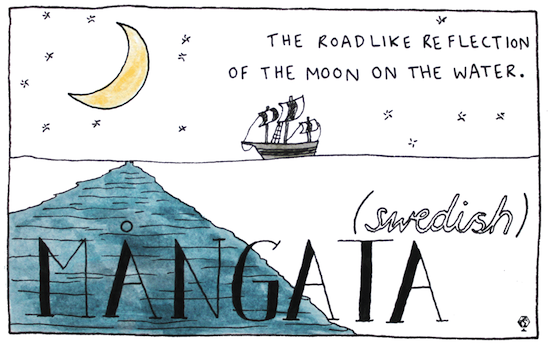 Torschlusspanik – German – Translated literally, it means “gate-closing panic,” but its contextual meaning actually refers to the fear of diminishing opportunities as one gets older.

Wabi (rhymes with Bobby) – Japanese – A flawed detail that allows the creation of an elegant whole.

Ayurnamat – Inuit – Roughly translates as the philosophy that there is no point in worrying about events that cannot be changed. 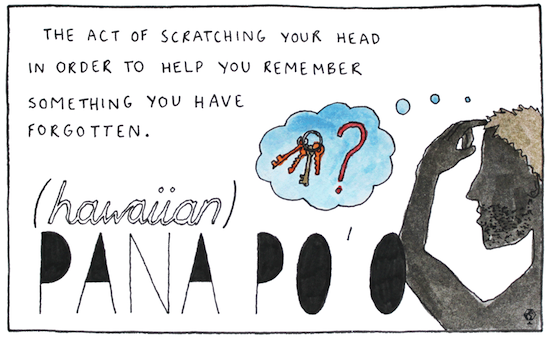 Treppenwitz – German – Literally “the wit of the staircase,” also known as that witty comeback that only occurs to you after you’ve left an argument you’ve lost. It’s a universal pain that most of us know all too well.

Gagung – Cantonese – Translates as “bare branches,” this word is used to talk about men who have little chance to get married or start families due to China’s one-child policy. 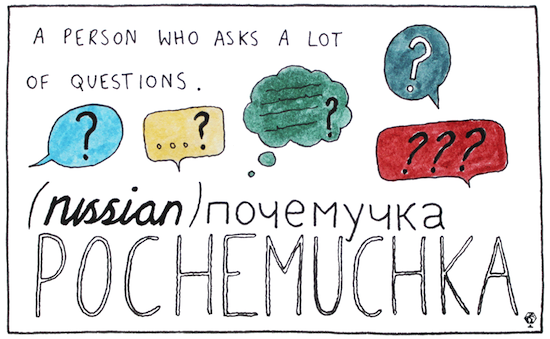 Tingo – Pascuense (Easter Island) – The act of taking objects one desires from the house of a friend by gradually borrowing all of them.

Frotteur – French – An individuals who get their rocks off by rubbing their crotches against the buttocks of women in crowds… classy.

Fremdschämen – German again – This is a word for the embarrassment one feels at watching someone else embarrass themselves, a sort of secondhand awkwardness.

Hyggelig – Danish – Difficult to translate, it gives connotations of a warm, friendly, cozy demeanor, but it’s unlikely that just these words truly capture the essence of a hyggelig; it’s something that must be experienced – think of good friends, cold beer, and a warm fire; to create intimacy.

Kokusaijin – Japanese – This has a literal translation as “an international person,” but refers only to Japanese people who have f0reign language skills and get along well with foreigners.

Chai-pani – Hindi-Urdu – While it literally means “tea and water,” this compound word is used to describe the money and favours given to someone, often a bureaucrat, to get things done.  In English, the closest we have is “greasing someone’s palm.” 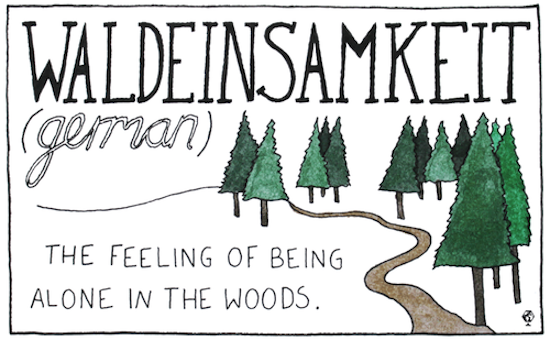 And last but not least… my favourite and yours:

Schadenfreude – German – Quite famous for its meaning, such that it has been absored into other languages; this refers to the feeling of pleasure derived by seeing another’s misfortune.  Think ‘Funniest Home Videos’.

I found it!  Bizarre words ahoy…

Aerodjarekput – Inuit – A term used for the act of swapping wives with another family for a few days to a week during the extended winter period.  Also refers to a long standing, socially accepted practice of co-marriage or polygamy within traditional Inuit culture.