I have only been using Twitter for a little over a year – I know, I’m fashionably late to the party, as per usual – and have inadvertently found myself ensconced in the warm fuzzy grip of what I like to call, the ‘Great Australian Labor Party Circle Jerk’.

One of the things that seems to happen almost by osmosis on Twitter is the ‘birds of a feather, flock together’ thing.  That is, like minded people with similar interests and opinions end up following each other, and retweeting one another, and not to mention sharing and resharing each others links until they are all over the place like some sort of informative glitter herpes, as they pervasively inhabit every crook and crevice of your Twitter feed!  This is never more apparent than when following people primarily engaged in the political arena.  The main impetus behind my ending up in this particularly, erm…  illustrious circle, was to engage in that now, much beloved Queensland past time – Campbell Newman bashing.  The decidedly nepotistic and morally bankrupt, Queensland Premier conducts himself like a reincarnation of Napoleon (complete with Little Man Syndrome), in such a dictatorial manner that he may as well tattoo a frigging target on his forehead!   So yeah, anyway… all these people with similar opinions crowd together daily, in a social media enabled, schadenfreudristic political feeding frenzy, which recently culminating with the meat food provided by the federal election, and the victory of a complete prat that the ALPCJ absolutely love to hate!  Actually, for a while there people seemed confused as to whether to stick with the tried and true, comforting and familiar Newman Bashing or to switch to the new and exciting, yet very satisfying, Abbott Bashing – fortunately for all involved, the ALPCJ resolved this dilemma by determining that it is possible to have it all, and proceeded to swiftly and efficiently bash BOTH Newman and Abbott, via the inherently flexible #LNPfail hastag!

This entire process of gravitating towards like minded individuals, or as I like to think of them from time to time, stark raving lunatics, is not even remotely surprising given the Twitter environment seriously discourages diversity of opinion.  For you see, when someone comes in from ‘outside’ and spews forth a diametrically opposed view to your own, they rarely do so with any courtesy. The limitation of 140 characters per tweet, does not a polite interjection, make.  As such, niceties are frequently abandoned in favour of making as strong a point as possible AND should that approach fail, or should the ‘outsider’ not have a sufficient grasp of the overarching issues, the specific case in point, or even just the English vernacular!, they often use their 140 characters to slag off at the original poster using nasty four letter words that you’d never dream of directing at a perfect stranger, were it not for the anonymity of the internet!  Naturally these trolls end up blocked pretty quickly.  The result of this decided lack of courtesy is that most of the people you end up following and/or are following you, tend to reflect, rather than challenge, your own ideologies.

But I have digressed considerably from my original intention when I set down to write this post.  I was going to write about ACCESS.  It’s the ease of access, or the appearance thereof, that I find most amusing on Twitter.  Access to people in positions of power, celebrity or influence.  Access to what they are thinking, access to what they might be doing, access in many cases of unprecedented direct contact.  Whether such communications are received or dignified with a response or not, is irrelevant… Twitter enables the masses to communicate directly with well known person, and what they choose to do with those tweets is, for many tweeter, neither here nor there.

I can tweet at Dita von Teese and tell her to pull her head out of her arse: “Why on earth are you tweeting about a fucking perfume launch, the day after 20 school children are shot dead? #BimboAlert”.  I can tweet at Pope Francis and tell him:  “Keep up the good work, it’s about time we had a progressive Head of the Catholic Church – hope you survive the inevitable assassination attempts! #HistoryRepeats”.  Or I can even tweet at Annastacia Palaszczuk, Leader of the Queensland Opposition (the self same one who was notably and completely absent from the media during the recent Federal election even though she was well placed to be telegraphing to the entire country what a disaster zone Queensland is turning into under a LNP Coalition government but was obviously too busy plucking her eyebrows or something, and we barely heard a peep out of the bint with the unpronounceable surname!), when she’s headed out for a night on the town… 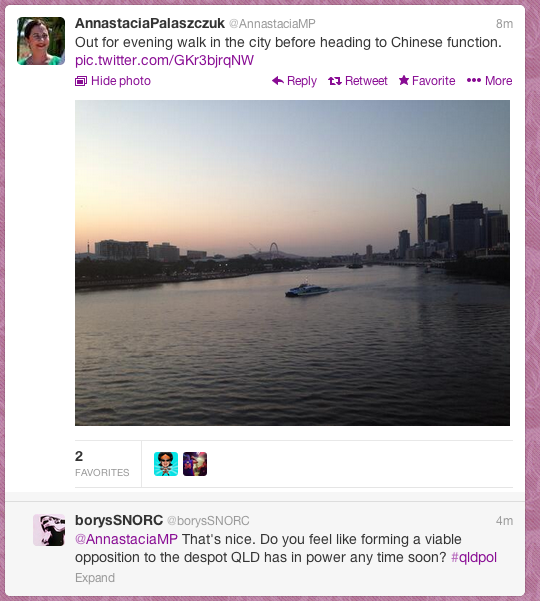 Now I got to ask you – as a public figure, whether you’re a burlesque strip tease artist, head of one of the worlds largest religious institutions of the leader of a political party – why would you lay yourself open like this?!?  It’s completely irrational.

Btw, I never received a reply to this Tweet – how rude! 😉 – but Ms Absent From The Media Palaszczuk, has been seen in the news challenging the Newman Government every day since I sent it!