Welcome to beautiful downtown Juneau where
everyone seems to be absolutely obsessed with their McDonalds.
No fewer than three tour guides felt the McDonalds was
noteworthy enough to point out to us in the town on barely 31,000
people! Juneau is the third largest city in Alaska behind
Anchorage and Fairbanks, and they’ve had a McDonalds restaurant
since 1982. The first tour guide told us it was the only take
out up here other than a Subway and that the day they opened they
had a line literally a mile long and that they sold a record
breaking 17,000 hamburgers on their opening day. The second
guide added in the extra tidbit that the McDonalds had to close for
an entire week after that opening day because they had sold out of
their entire inventory! The third guide I encountered who
thought Maccas was monumentally important to the town of Juneau
told a story of how the Mayor of Skagway missed his McDonalds so
much that he bought enough McDonalds for the entire town of
Skagway, had it all put in an ambulance, driven out of town to the
airport and flown the Skagway where it was greeted by Skagway’s
high school marching band, boy scout troops, and a half holiday for
the entire town as they came out to have their McDonalds!
That last bit is just detailed enough to be for real…
either way, these people are obsessed with their take out (or lack
thereof) as we also heard a story of how Taco Bell opened in Juneau
a few years ago, but got closed down after they were found to be
selling illegal drugs through the drive through.
:S
Anyway,
what did we come here for again? Oh yep, the Mendenhall
Glacier, which feeds Mendenhall Lake and the Mendenhall River, in
the Mendenhall Valley near Mount Mendenhall… all named after one
of the original surveyors and cartographers up this a ways back in
the late 1800s some dude named Mendenhall, who never actually came
to Juneau at all – it is a very pretty glacier btw, and extremely
easy to access. You can take a shuttle bus straight up to it
for $8 each way and wander around taking some photos of the blue
ice and some iceberg chunks that have cracked off it (the
Mendenhall is receding at the moment, approximately 400 odd feet
every years since the late 1770s, which is fairly
rapid). 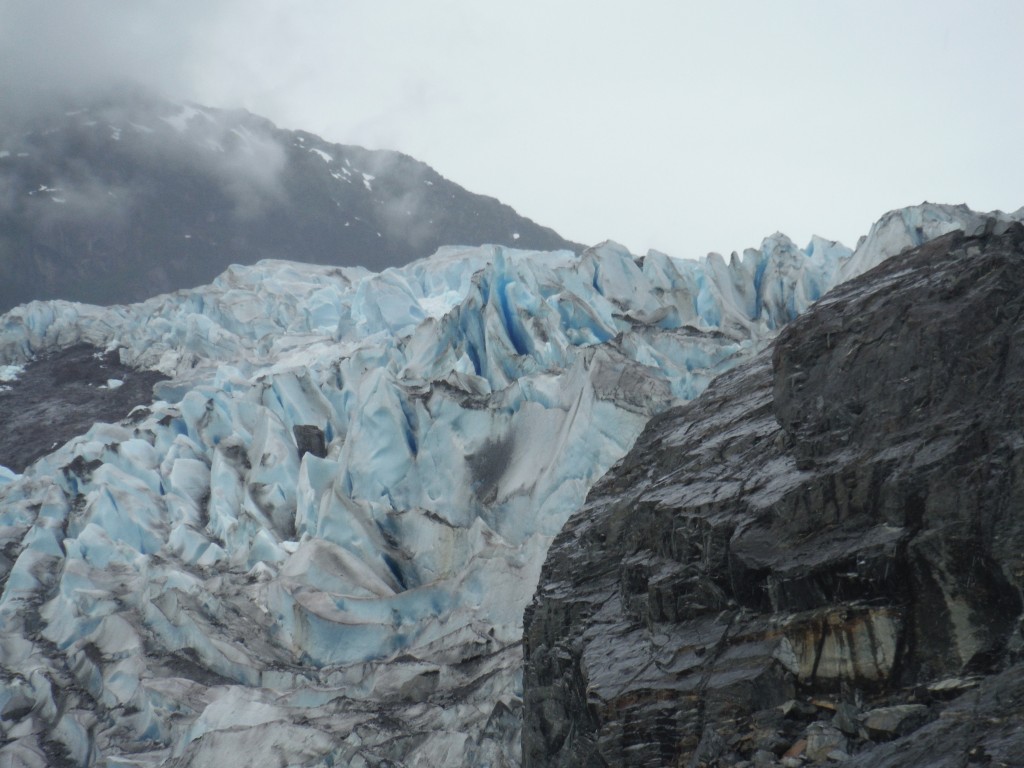 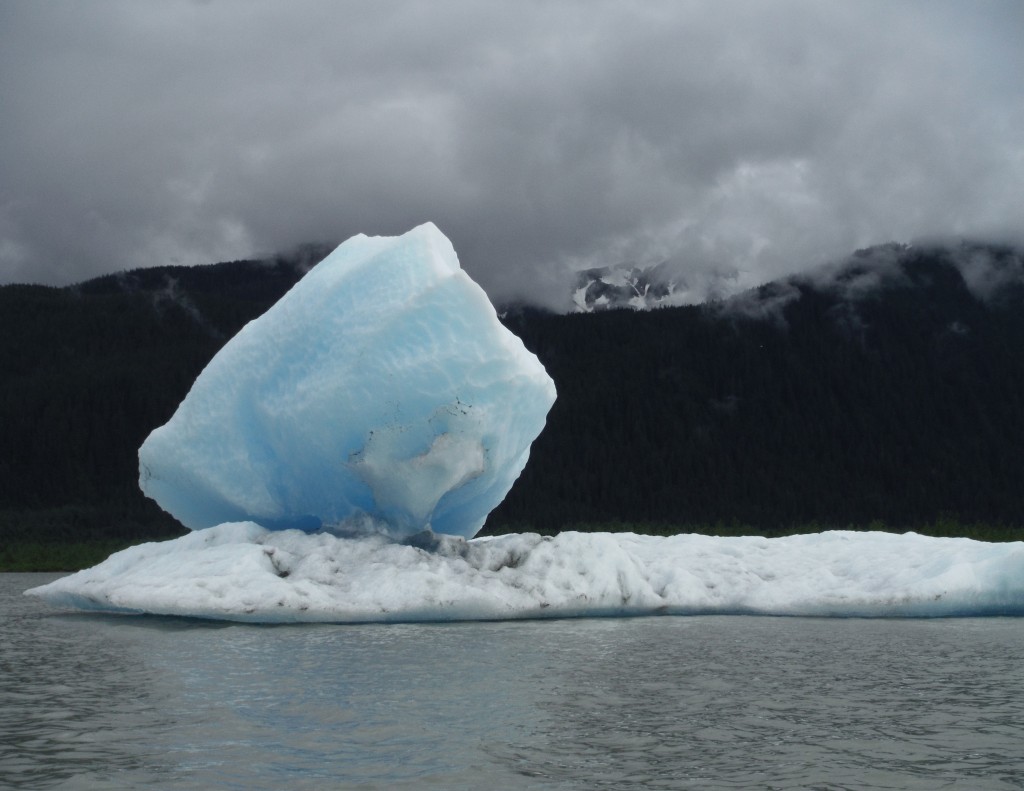 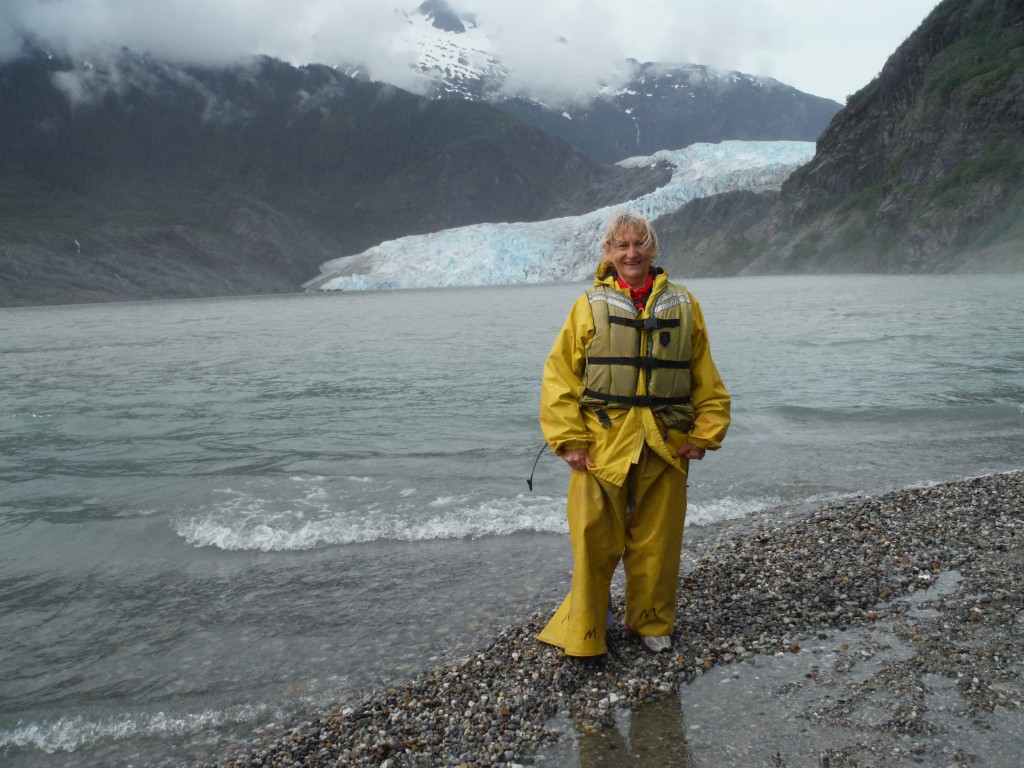 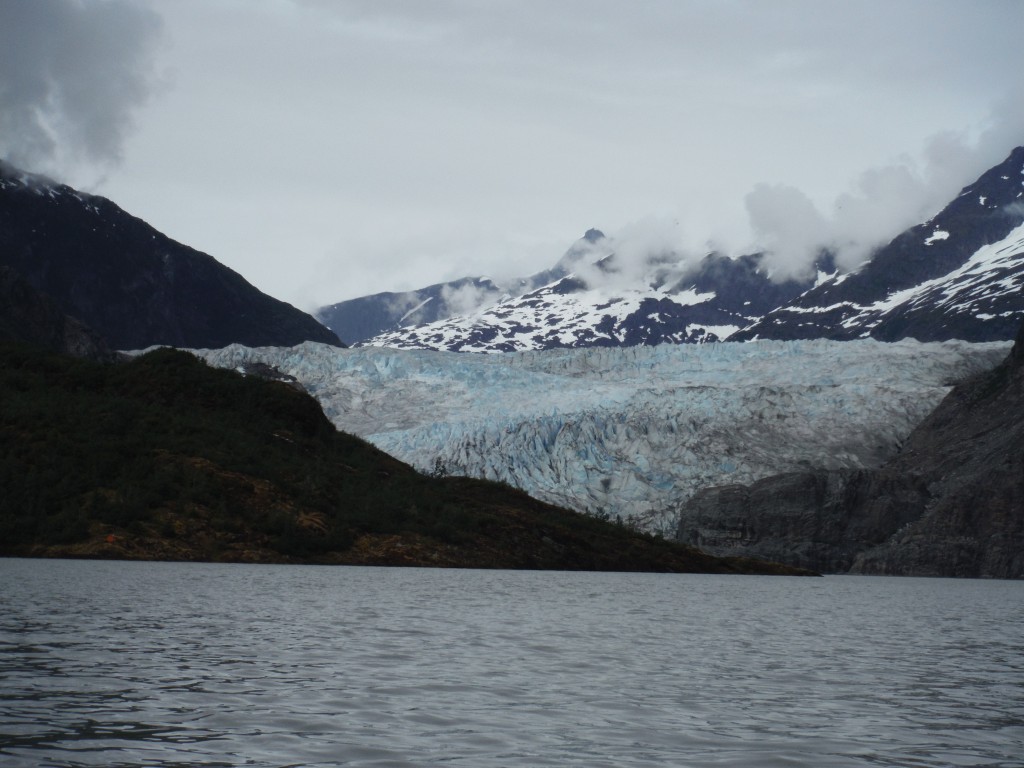 After that we came back to the ship today to grab some
lunch and get out stuff ready the afternoon… Aunty Mary was off
canoeing and I was off for a whale watching expedition and wildlife
quest. I spent the afternoon on a catamaran cruising around
the Auke Bay and the Lynn Canal looking for bald eagles, humpback
whales, seals, sea lions and sea otters as well as deer and bears
on the islands as we passed by. We saw plenty of humpback
whales and bald eagles and Stella sea lions, Dalls porpoises but a
little light on the other creatures we were hoping to see.
The naturalist on board was full of interesting information
about the animals as well as about Juneau in general so it was a
really interesting afternoon.
I learned that Juneau was named after a gold miner named
Joe Juneau who literally bribed the townsfolk to name the town
after him in a poll, by buying them plenty of liquor (great
politican in the making that Joe). I learned that the Red Dog
Saloon in downtown Juneau sports an old pistol on the wall that
allegedly belonged to the famous Wyatt Earp himself, which was
kinda cool, but not cool enough to go ferret out a glimpse of this
famous pistol.
I
learned that Alaska was bought from Russia in 1867 by the United
States for the princely sum of $7.2m which worked out to be
approximately $0.022c per acre, but wasn’t made a state until 1959.
I learned that the major industries/employers in Juneau are
government and public administration, followed by tourism, followed
by the salmon fishing industry. Oh, and I saw the Governor’s
mansion… and let me tell you that dumb bint Sarah Palin was lying
through her damn teeth. The Governor’s Mansion is a six
bedroom, ten bathroom stately home not far out of down town Juneau
and it is well and truly blocked by a fucking mountain range
from seeing Russia on a clear day!
And on the way back to the ship,
I stopped into one of the many, many jewellery stores that have
proliferated nearly every Alaskan town and had a look at some
tanzanite… the prices here are scary. Gorgeous colour,
bright and clear, 2.75ct trillion cut stone set in a yellow gold
and diamond ring – $1950. I had to high tail it out of there
quick smart before I went and hit the credit card hard with a
tanzanite ring, some earrings and a pendant I didn’t need, and
would probably hardly ever wear! Oooh, aaah, shiny!
😀
PS: Better
late than never… a bald eagle I saw yesterday in Ketchikan and
the bear I saw in Jasper downloaded from my good camera
– 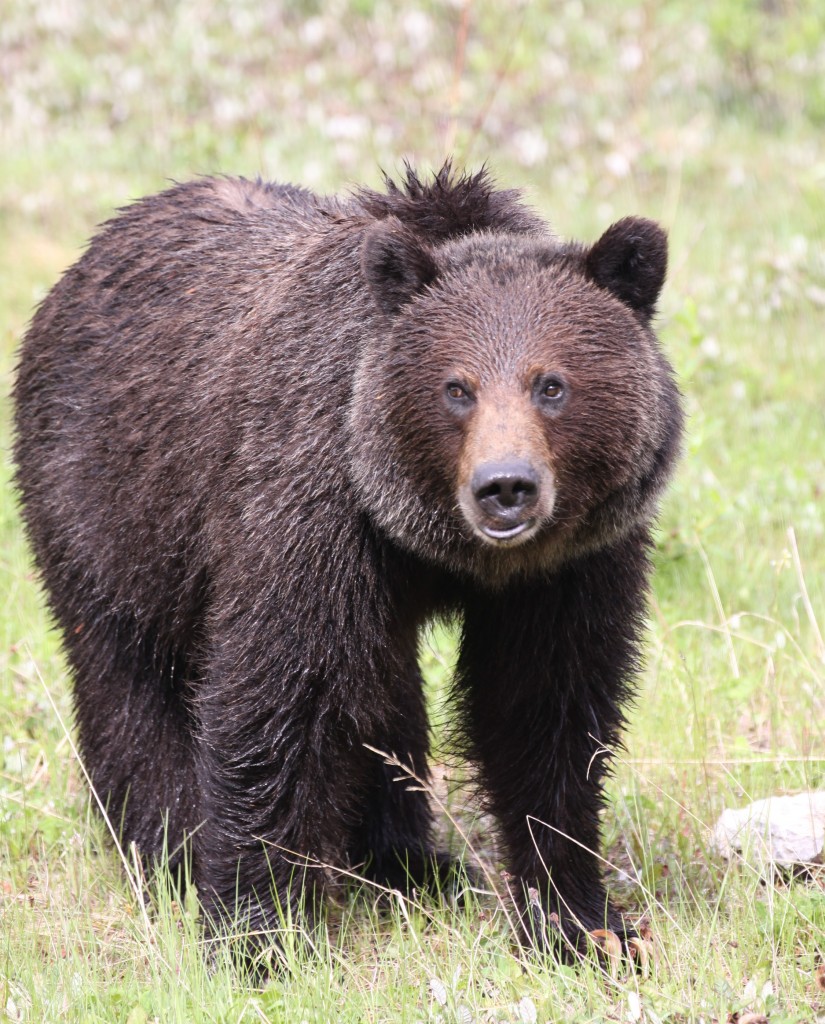 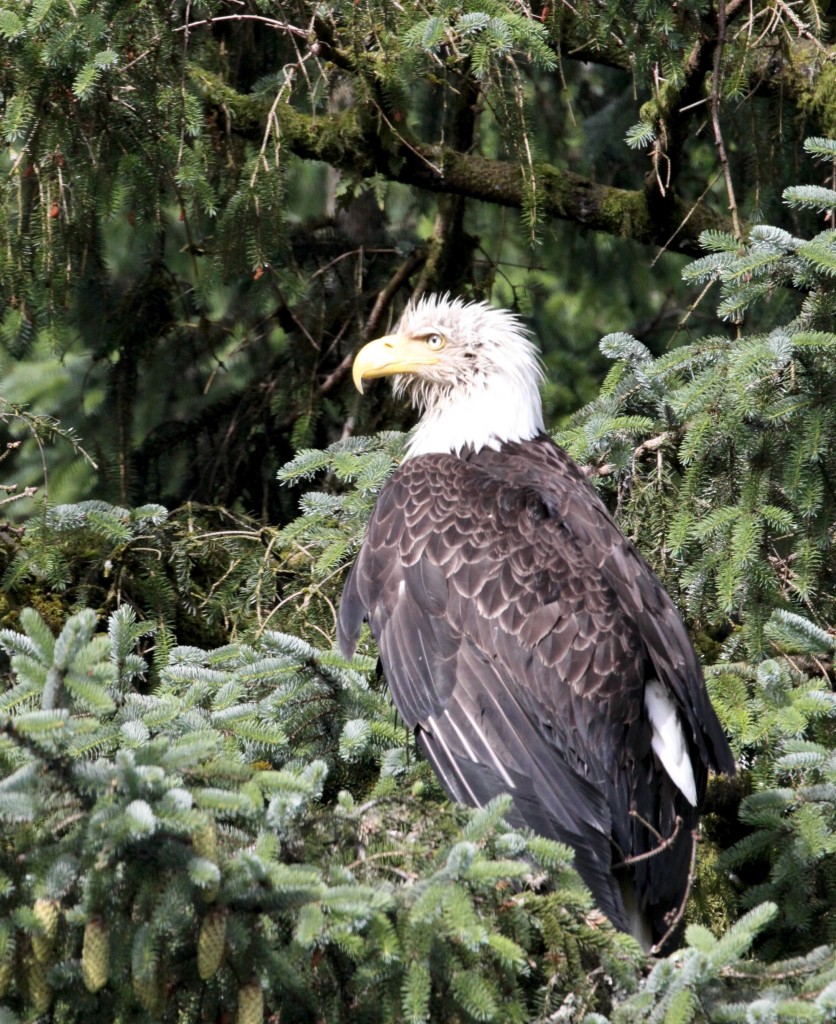 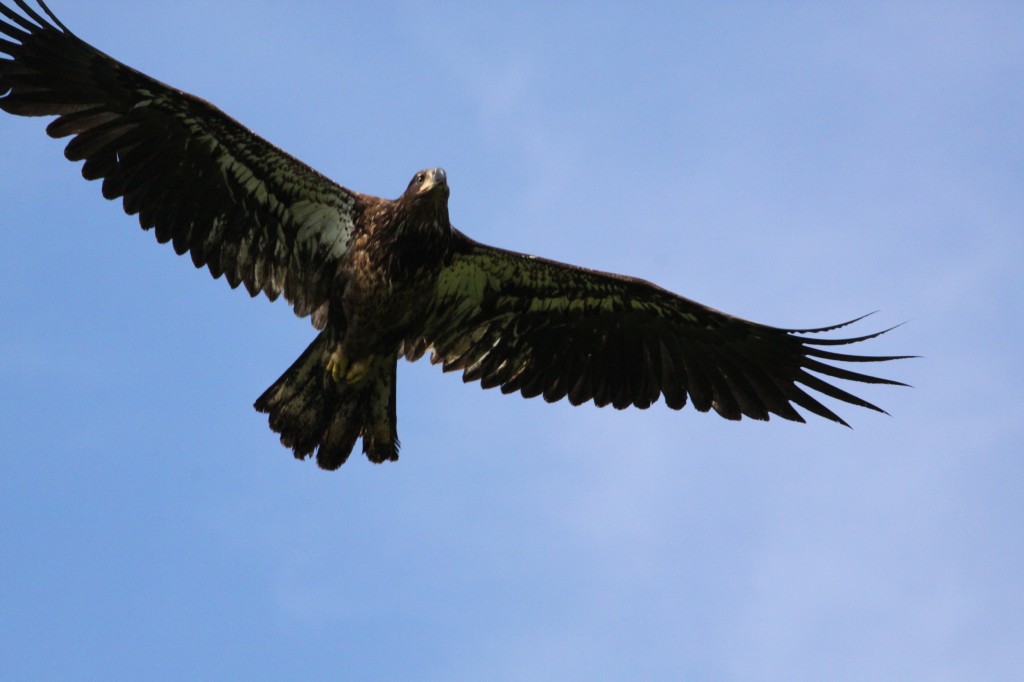