I’ve always thought it was language, cuisine, fashion and culture that separated these two geographically and culturally disparate nations.  But after this week… I think there’s way more that separates these two diverse countries than just 5,500 miles, interesting fashion choices and a differences of opinion about cheese being a major food group!

Yesterday, Dominique Venner eminent French author, historian and journalist, shot himself inside Notre Dame de Paris Cathedral allegedly in protest of recent ‘vile laws’ legalising same sex marriage and adoptions to same sex couples.  Just prior to his interesting choice of political statement, he had published an article on his (extremely right wing) website encouraging other activists to ‘take measures’ to protect French and European identities from being eroded by such laws as these.   Why would a seemingly intelligent  well read, often published, historian and essayist choose to top himself in such a public manner, in such a public place and in what looks like a misguided attempt to martyr himself for a decidedly outdated cause?  On the surface it doesn’t seem to make a lot of sense… wouldn’t the more prudent academic choose instead to use his reputation to publish his vitriolic sentiments and engage the law makers of the day in relation to the laws he found so offensive? After all do not the intelligentsia believe the pen is mightier than the sword? 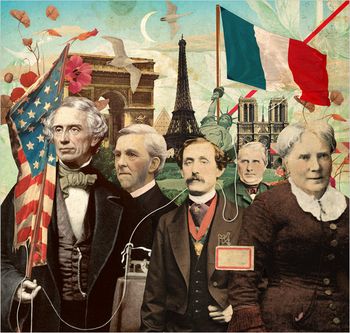 It’s such a bizarre thing to happen in France, and of all places in a national monument such as Notre Dame Cathedral.  Now, as we’ve seen time and time again, disgruntled Americans don’t take themselves to an iconic places of religious worship and shoot themselves in the head leaving behind a clear and concise (however nutty) explanation for their actions… No.  The American way to express displeasure at the establishment is usually manifested by the disenfranchised by taking themselves to various educational institutions and shooting numerous random strangers and students that have the misfortune to be in the vicinity, leaving only vague hypotheses for their actions.

Neither course seems very appealing, or even practical, if one’s aim is to change the society one has the happenstance to find oneself born into and participating in.  Personally, I can’t say I identify with either course of action to deal with dissatisfaction with my country socio-political direction.  But where do either of these extreme behaviours come from?

I also saw another article this week discussing inherent differences between French and American parenting habits.  The Readers’ Digest version of that article is that the French are very strict and raise their children to be self regulating and well disciplined from an early age.  So much so, that the French DSMV doesn’t recognize ADHD as a neuro-biological disorder, rather they consider ADHD as having psycho-social and situational causes… meaning that they do not believe that ADHD is something that people are born with but instead believe it is largely due to parenting habits, food and dietary problems and  underlying social problems.  This refusal to admit that children have a problem has resulted in less than 0.5% of children in France being diagnosed with ADHD and being treated with Ritalin or Adderall.

Compare this with 9% of school aged American children diagnosed with ADHD and being treated with the same drugs.  Are American children genetically predisposed to neuro-biological conditions?  Or are American children riding rough shot and externalising and acting out all the time instead of being encouraged towards self discipline at an early age? Maybe this is ultimately why a disgruntled Frenchman decides to make his political statement by ending his own life instead of the Americanized version of extreme political activism which usually results in the ending in the lives of others!