Many moons ago I had a wee rant about frangipani car stickers, and I thought I’d be glad to see the end of them.  Indeed, there are now hardly any of them getting around town and those that are, are badly faded into roughly flower shaped white blobs now.  Still an eyesore but seeing their proliferation had died away, we shan’t complain too loudly about it.

However, had I foreseen what the slow dying off of the frangipanis heralded, perhaps I would not have been so quick to deride them… for in their place we have now been inundated with My Stick Figure Family car stickers.  Positively inundated!  They are EVERYWHERE.  Ranging from the nuclear Mom, Dad, two kids and a dog family to this… I don’t even know what you call this! 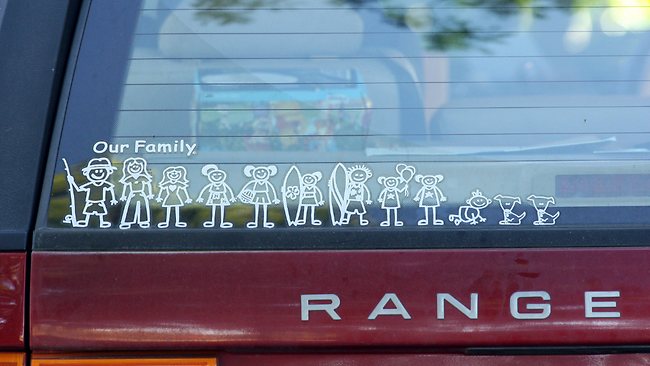 Yep, sure.  When driving around town, what you really want is to tell the world is that you have eight kids and you’re wife’s fanny is as well used as David Attenborough’s passport! (Thanks Profanisaurus)  OMG… Way more than I ever needed to know about anyone I’m overtaking on the freeway.  And of course the spoof versions have popped up all over the place.  Because if you’re going to tell thousands of fellow motorists about the size of your family, the gender and approximate ages of your children and whether or not you have guard dogs in the family, you want to be sure to share as much personal information as humanly possible by letting them know what your hobbies and reading habits are too!

The Indiana Jones Family: This one says ‘Hey, we are products of the ’80s and we like to think we are adventurous but we probably have very boring mundane lives.’ The Indiana Jones Family prefers escapism and travel is high on their list of priorities, but the closest they’ll get to an archaeological adventure is the Indiana Jones Adventure ride at Disneyland!  They represent both of the people who saw that Crystal Skull movie and thought it was awesome. 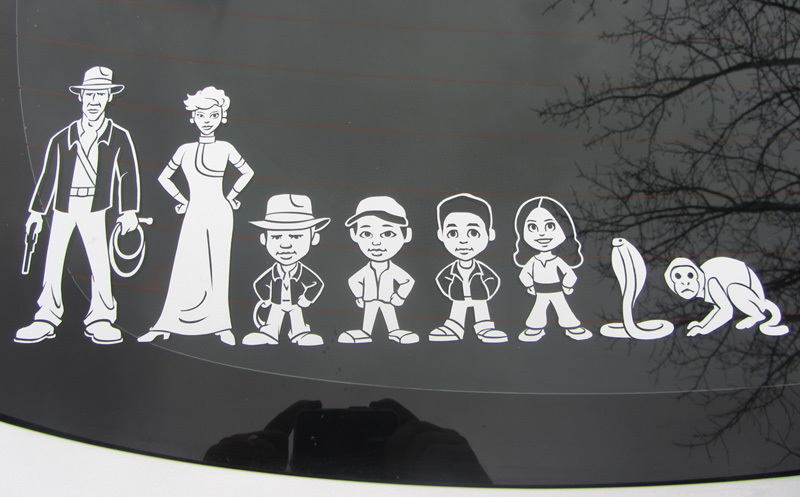 The Twilight Family:  OMG.  Is it not bad enough that this drivel exists in novel form and that someone has seen fit to inflict it on the movie going public by turning it into several movies (incredulously… several financially viable films too, what’s with that!?).  Is it not bad enough that these same films have spiraled a talentless git like, (shit, whashisname… hang on, Google to the rescue), Robert Patterson, to stratospheric super stardom earning him a salary that exceeds the GDP of a small Micronesian nation?  Do you really want to smuck that shit all over your car and drive it all around town informing all and sundry, that not only to you have terrible taste in films, but also that you have no idea what literature is either? 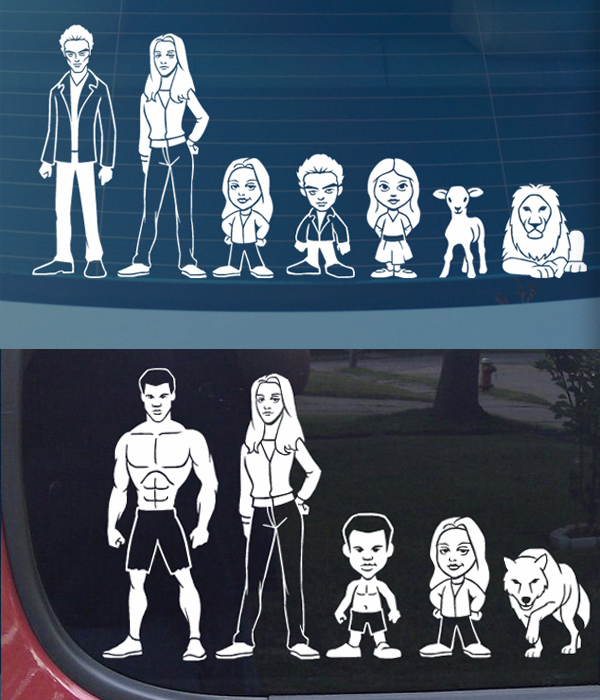 The Star Wars Family:  Yep, because sharing how many of you there are just isn’t enough… what you really want to tell them, is that you’re monumental geeks too.  I bet you have all the movies on VHS, DVD, BluRay and have watched the directors cuts, can quote the films and y’all hate Jar Jar Binks.  Oh and by the way, your stickers say ‘Our house will be completely empty during every comic conference that comes to town.’  Well done there. 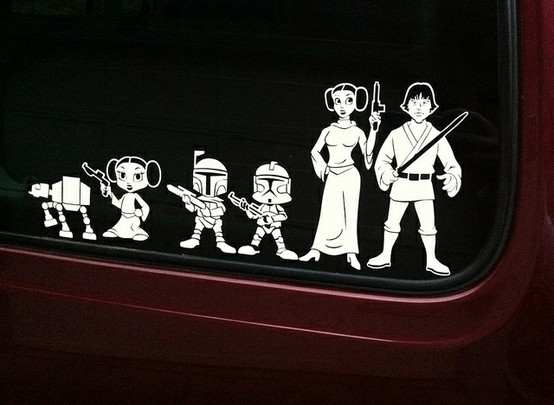 This Star Wars Family is sharing a simliar sentiment, but they’ve also decided to let us know that they regard one of their offspring as akin to a short, scavenging rodent-like creature.  Nice going Mom and Dad. 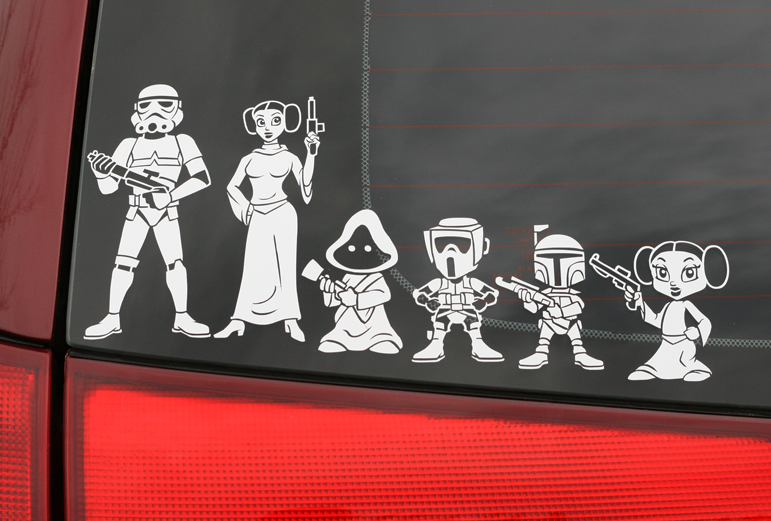 The Spiderman, Wolverine and Iron Man Families: These ones also say ‘Hey I’ll be out of town at every big geek conference in the district, so please feel free to come rob our house of all our precious, mint-in-box, comic book collectables and movie memorabilia!’  Just don’t, people.  Keep your proclivities to yourselves! 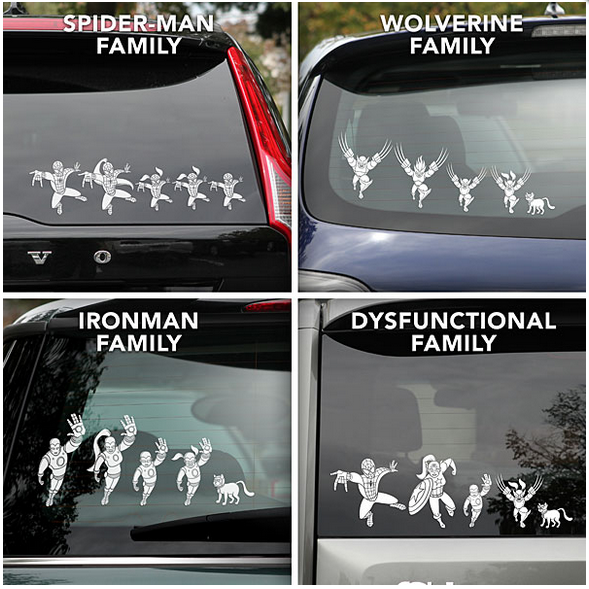 The Monster Family:  These guys are working hard to show that they are non-conformists while, you know… falling right in line and conforming to the My Family sticker trend.  But, Brownie points for bringing some colour to the party, I feel.  Nicely played. 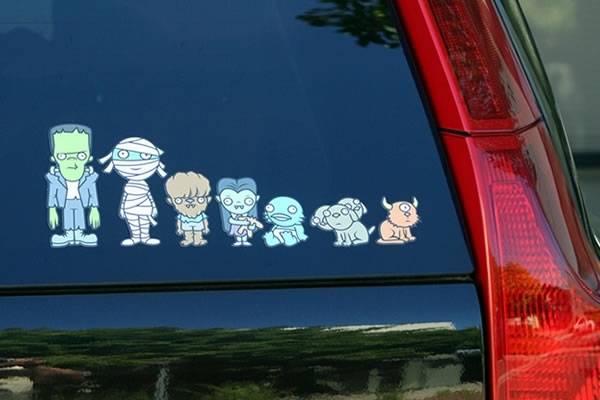 Another of the non-conforming conformists: The Zombie Family.  We are also going for the anti-establishment vote and like to think that we don’t conform to the ‘normal’ religious, social, or moral principles of society… but we will conform enough to get us some My Family sticks for the family car.  Zombies are so mainstream now they barely fit the bill anymore anyway. 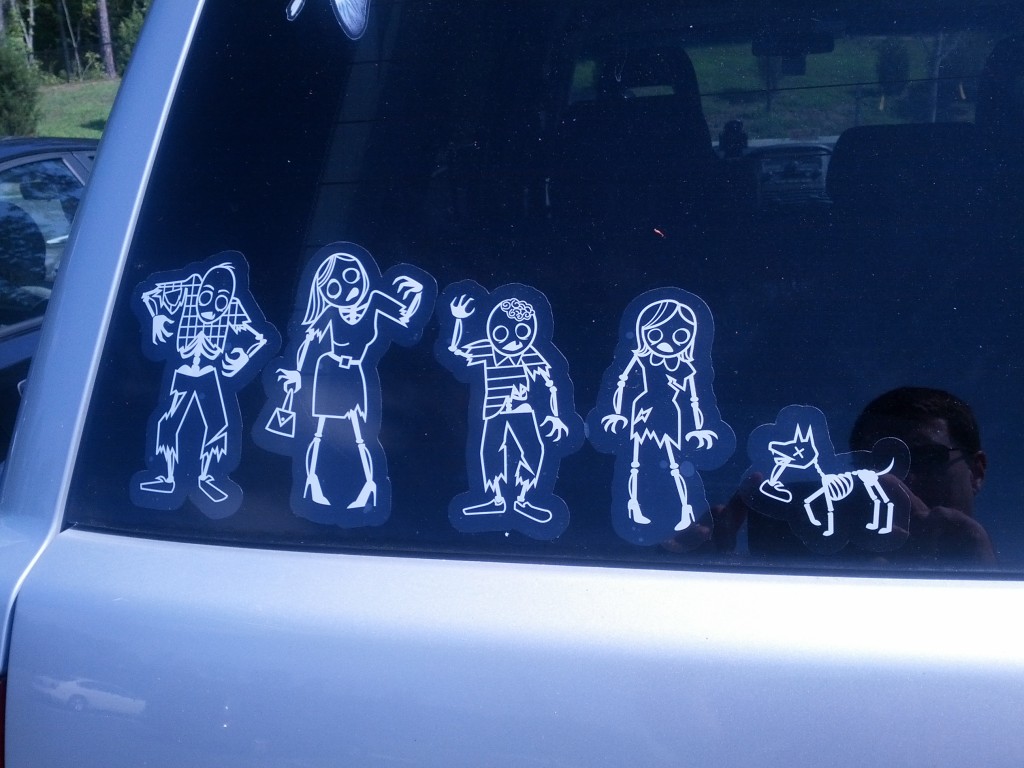 The 19th C Re-enactment Family:  I… just… why?  For the life of me I can’t understand why anyone would want to be driving along in the family car and displaying symbols of dead babies/children to their fellow motorists.  I’m somewhat perplexed and vaguely disturbed by this idiotic concept.  It’s as though over sharing through regular stick figures isn’t weird enough, let’s add a dose of morose history to the mix. 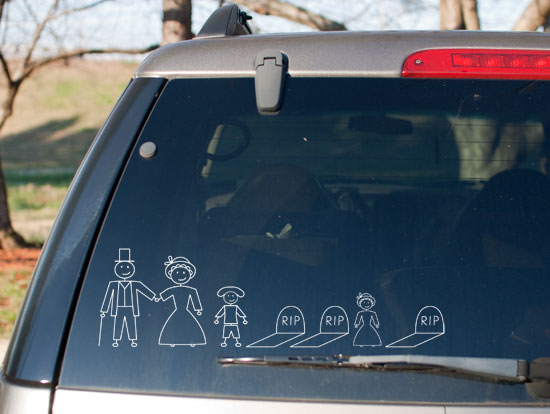 The Lego Family:  Slightly more circumspect, this mob WANT to follow the trend but are attempting to give away as little as possible.  Mom, Dad and gender indeterminate kids.  Very little additional information conveyed here, because well EVERYONE loves Lego… they could be accountants, janitors or rock stars. 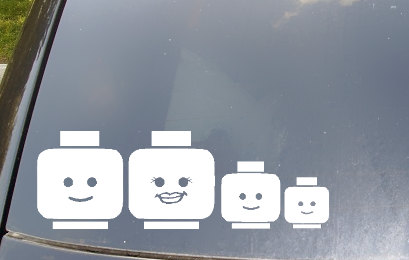 Then there’s the Hyper-Personalized NAMED Family:  OMG!  These people need their fucking heads read!  Mom and Dad get to maintain their anonymity but why, why, oh why?!?! would you put your children’s names on the back of your car?  Maybe I’ve watched too many episodes of Criminal Minds, but I see a creepy guy, in a tacky Hawaiian shirt, approaching little Grayson with a chloroform rag, and telling him that Mommy has sent him to collect him from school today because she was at the dentist and it’s bye, bye, dead in a ditch with little Grayson (unless it’s Ohio, in which case he might resurface after a decade of abuse in captivity). 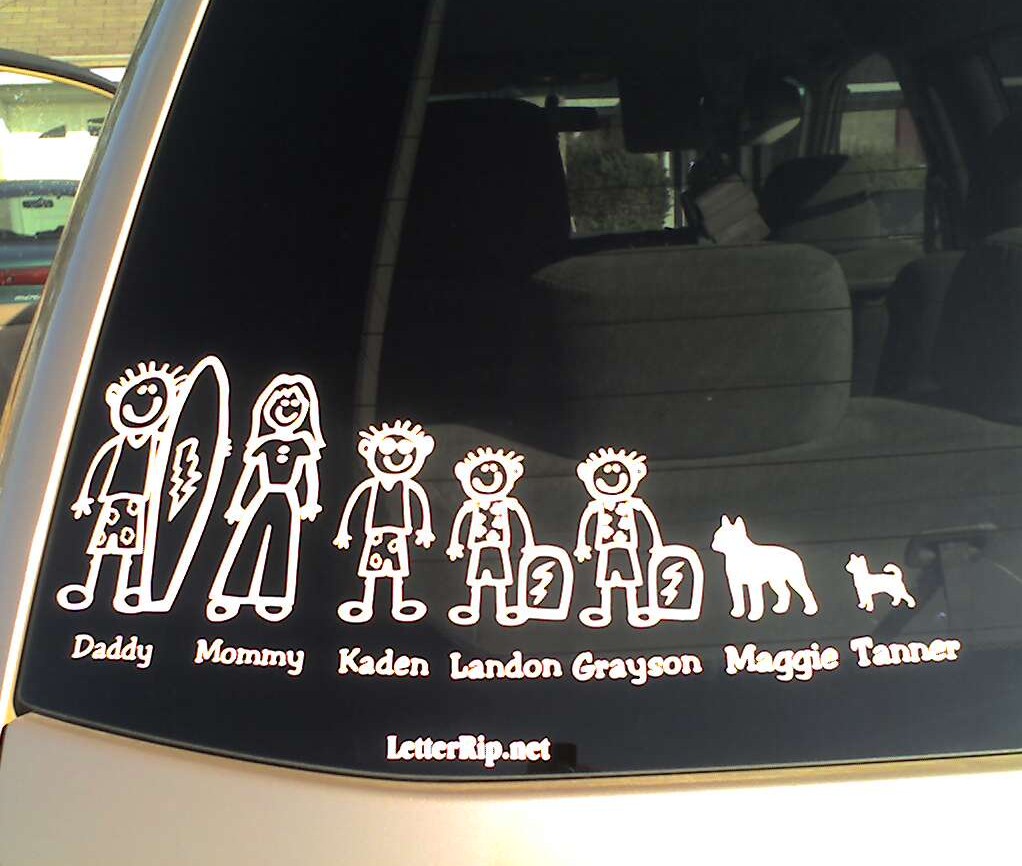 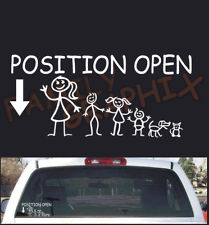 This one is like is a bit like its predecessor but even worse.  It may as well say ‘Hello, I’m a single Mom with low self esteem and small children you can prey on.  Call #1800FUKTARD to apply’.  I have actually seen a couple of ‘single mum’ my family stickers and all I can think is – how fucking stupid are you to drive about telling the world that 1) there’s no man in the house and 2) you have small children!  Why not just pain a ‘come hither’ pedo-target on your back?
Single Moms take note:  This is the My Family sticker you should have on your car!  Even if it’s not true,  A great big Fuck Off Vibe seems more appropriate.  Then again, you could get taken for local militia and see your car being broken into regularly by people from Breaking Bad looking for random handguns left in the glove compartment! 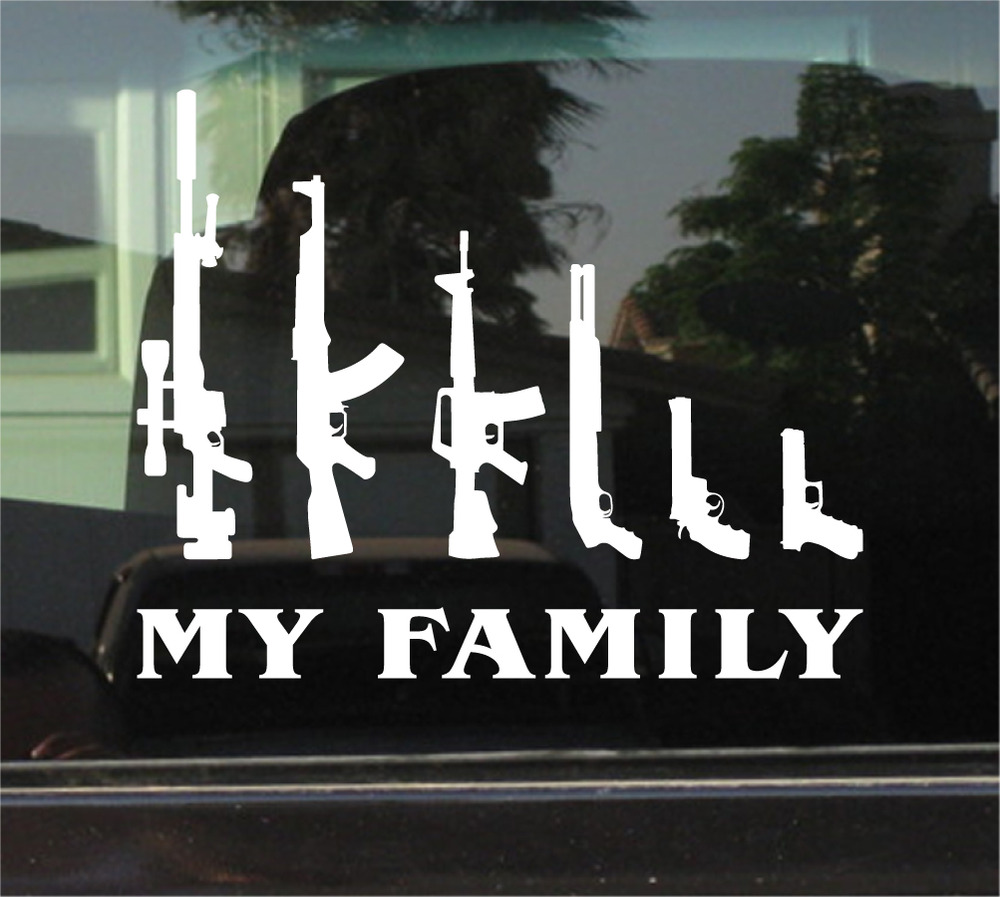 Yeah, so I guess it’s pretty evident I’m not a fan of the My Family sticker craze and every time I see them I can’t help but wonder what people are thinking as they put all their personal details out there for the world to see.  I can’t fathom it for the life of me.  I assume it stems from two human instincts. 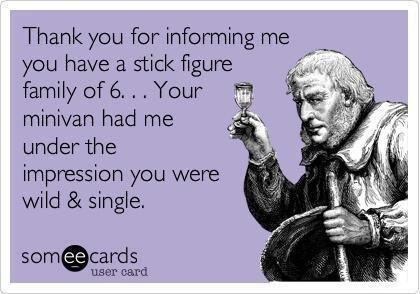 The first, and most obvious, is overwhelming pride in their family and a desire to share that pride in a misdirected public fashion, and I say misdirected because seriously – no one else really cares.  The second is that people can’t help themselves but want to get in on whatever the latest fashion trends might be – whether it’s the latest gizmos, the new seasons fashion or in this case, public displays of familial associations – and they don’t always think about the repercussions of blindly following what seems like an innocuous fad.  This theory has been solidly demonstrated by the latest summer’s fashion trend of pockets hanging longer than one’s shorts… obviously ZERO thought applied by those hapless, but dedicated, followers of fashion! 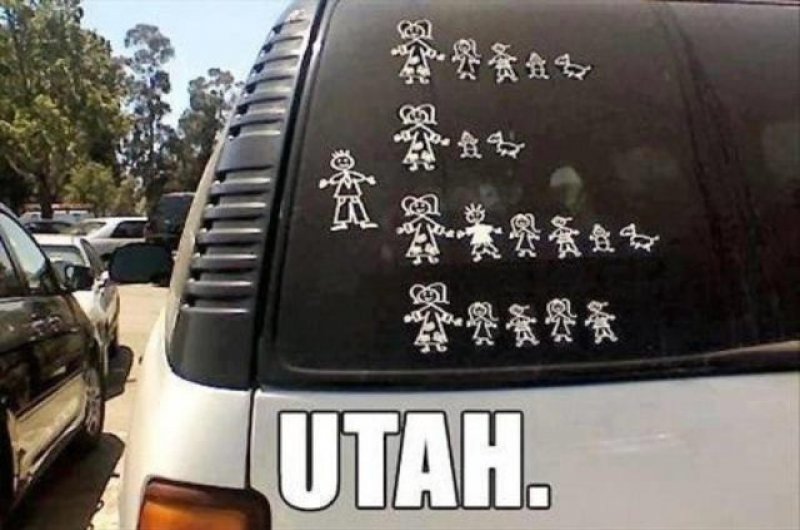 But at the end of the day, there is one unarguable and invariable fact about My Family stickers which shall hence forth remain a truism for the ages – absolutely no one other than the bearer, gives a fat rats arse about your stupid family stickers. 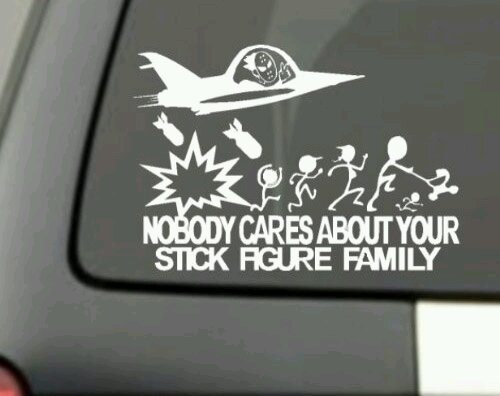