I have reoccurring dreams of this house, and by reoccurring I mean I have been dreaming of this place since I was maybe in my late teens?  I am pretty sure the house doesn’t exist, and thank fuck for that!

My ‘dream house’ and I use the term ironically, is a place filled with a sense of latent menace, potential danger and lurking evil… think the basement from Silence of the Lambs or the training camp/armoury in the more contemporary TV show, The Following.  The walls are solid brick or cement, once white but now filthy with age and neglect.  The rooms range from huge with makeshift fires in the corner that people can huddle around to tiny narrow hallways with lowered ceilings that make me duck as I walk along.  The whole place is rather dark and somewhat dank, but I can see clearly thanks to old bunker lights high on the walls in a variety of amber and deep red colours colours… which reminds me of untold hours spent in the B&W darkrooms at Uni many years ago.  The most disquieting aspect of the house is its inhabitants.  There are a multitude of hairy unwashed miscreants, who appear to be hiding around corners and loitering around leeringly down the long and dreary, windowless hallways. 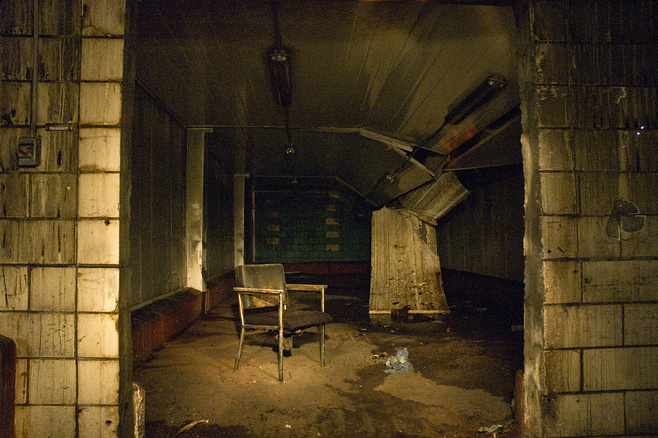 The people are often congregating furtively in corners, engaged in unknown but definitely nefarious deeds… I can feel their ill intentions washing over me when I come across them and it takes considerable willpower not to scream and run.  They seem to be constantly scheming, but will stop and stare at me when I come into a room.  They watch me as I inch past them warily with my back against a wall, until I leave ‘their’ space, and then they resume their evil confabulations once I have departed.  Moving through the house is always quite disconcerting, because even though I know the place is populated with plenty of these undesirable individuals, they inevitably and invariably scare the crap out of me when I walk around the corner and discover a group of them congregating somewhere.

Occasionally, I can hear cries of anguish or distress in the echoing hallways… no, it’s definitely not a ‘dream house’ in the traditional sense of the term.

I could try to map the place out, I’ve been there so often in my dreams that I can visualise the rooms and hallways and how they interconnect, but I doubt the effort would result in anything remotely practical, as I know the house doubles back on itself and rooms connect to other rooms in such a way that defies architecture and physics – the place is a veritable maze and I can never find my way out, I’m stuck there until I wake up feeling slightly alarmed and insecure.  I’m not sure what causes these dreams… but when I find myself wandering these hallways I always feel alone, unprotected and extremely nervous that something bad is going to happen.  I’ve had these dreams many times and again last night… but have never bothered to try and find out what they might mean.

So I decided to look up a bit of dream interpretation on the Internet – reliable sources that they are.  And this is what the Internets in its infinite wisdom spat out:

Small rooms may mean you’re feeling confined or limited. Having a lot of rooms could be a lot of choices or just confusion in your life. Hallways are transitions, such as when you’re deciding something or in between parts of your life. The more winding they are, the more trouble you are having transitioning or accepting changes in your life.

Not having windows also would be very confining, very stifling. Getting lost means being confused, unsure where to go with your life.

Going into the basement represents your subconscious, your deeper thoughts and feelings. Finding a new door would be you’ve expanded your life somehow and a wall with a secret room would be thoughts, ideas, memories that you’ve hidden even from yourself. These dreams really are a collection of very easy to understand symbols!

It’s good that you go in the secret room, you’re exploring those hidden thoughts, and that does lead to other levels, but each level is harder to understand, maybe you’re reaching a more basic you without the superficial, which is a good thing but can be scary.

Feeling you’re being watched or followed could deal with others you feel are observing you, or a sense of your own behaviours as others see them.

You’re figuring out what’s wrong with the house, so that’s introspection, looking at your life and how you can improve it. Being stuck and can’t get out would simply mean you feel stuck, unable to progress, unable to break beyond limits, unable to change your life.

Well that all sounds like pretty typical psychobabbly really.  Most of it readily applies back to dealing with chronic pain and/or the complete inertia my life seems to have taken on since the last car accident.  Damn, thought maybe there’d be something new or useful there.

Oh, well… maybe one of these days there will be unicorns and rainbows in my dreams, but to be honest, if there ever was, I’d probably be checking the labels on my drugs quick smart!

2 thoughts on “Nope. No Desire to Build My Dream House”