I have long suspected it…  Ever since I found myself in various Turkish internet cafe’s back in 2007 and I couldn’t access my blog to update my travels.  One place it came up with a (in Turkish) “Are you over 18?” type message before letting me sign in and a couple of other places it blocked me entirely with an indecipherable pop-up box.  Slightly embarrassing the first time that happened and I had to ask the spotty little Turkish geek in the front desk what was wrong with the terminal I was using and he came to the machine, looked over my shoulder and said very loudly “NOT LOOKING FOR PORNOGRAPHY ALLOWED”.

Okay, so some of the language and terms on my site must have set off the stringent Turkish filters. I found ways around it and managed to update my travels one way or another.  But I guess it’s official now: 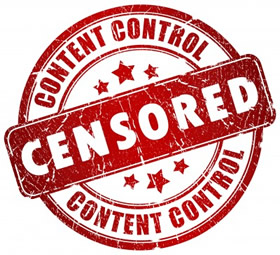 Right, well.  There’s only one way to deal with this… there must be some high ranking government official who would like a letter about the blatant injustice evident in the unnecessary and unwarranted censoring of my blog being accessed from government computers!   😉

3 thoughts on “This blog is Rated (R) for your convenience.”