Oh my God.  Sometimes I totally wish I had never gotten a Twitter account… being up close and personal and hearing what is in the head of the people we enjoy as celebrities is a bad, bad thing.  Dita von Teese… the more you Tweet the Twatter you get!  The US had an historical election today and your feed which appears to be operated by you (or an intellectually impaired cheerleader type).  First there were these insightful comments on US election –

Awesome for some! Ms von Tesse didn’t have to stand around in the cold to get in and cast her ballot… and so proud to be from Michigan which was odd given she was in California at the time.  :S

This tweet was a bit of a corker.  Many celebrities have used their fame to endorse candidates, engage in the debate and utilize their visibility to encourage others to think hard about how important their choices are this election.  And Dita did no different. Here is a very important picture sent to her on this historic day from a fan that she felt she should retweet for the edification of her fellow Americans – 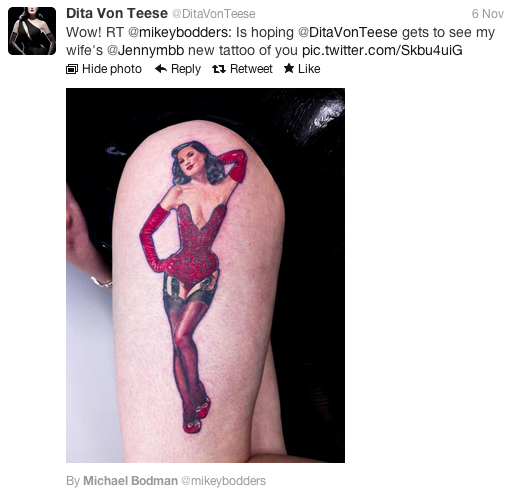 I love seeing celebrities using their fame for national and communal good, instead of self aggrandisement like this. It warms the cockles and gives hope for the human race, provides us with a renewed faith that the masses aren’t misplacing their idolatry on people just because they’re attractive but rather for what they have to say rather than how they look.  And finally, Dita von Teese twittered an impromptu not at all set up happy snap of herself and a friend celebrating the election!  Don’t be fooled into thinking she’s just trying to show off that she has an opinion and that ‘yes’ she did go vote… it might be easy to misinterpret this image.  But if you ‘read the visual’ you’ll see she is actually politically engaged and is celebrating the Democratic landslide victory, not just the fact that she bothered to turn up! 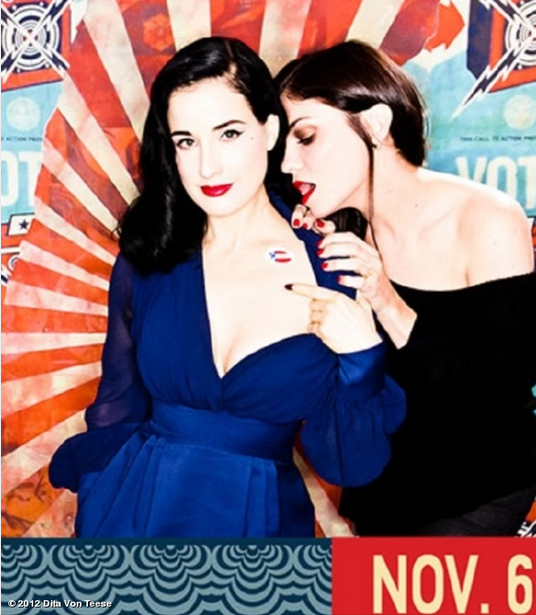